The extent of increase in Indo-Pacific warm pools is almost twofold. 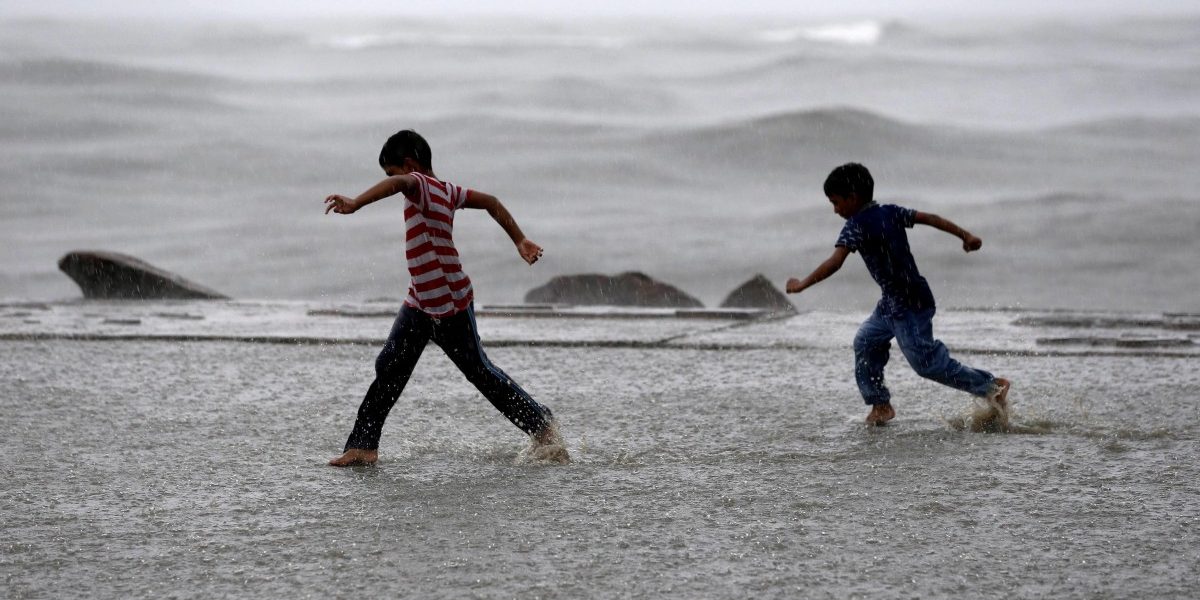 Children play in a puddle of water as it rains at a sea front in Kochi, India June 9, 2019. Image: Reuters/Sivaram V/File Photo

New Delhi: A new study led by Indian scientists has reported that rapid warming of the Indo-Pacific Ocean may be responsible for changing rainfall patterns in many parts of the globe, including over India.

The warming pools of the Indo-Pacific Ocean are expanding and this in turn is altering a major weather phenomenon known as the Madden-Julian oscillation (MJO). The changes in the behaviour of MJO impacts rainfall patterns globally. The warming of Indo-Pacific Ocean is the result of anthropogenic global heating.

On the one hand, these changes in MJO behaviour have increased the rainfall over northern Australia, west Pacific, Amazon basin, southwest Africa and southeast Asia (Indonesia, Philippines and Papua New Guinea). On the other hand, these very changes are precipitating a decline in the rainfall over the central Pacific, along the west and east coast of the US, North India, east Africa and the Yangtze basin in China, according to research findings reported in the journal Nature.

Over north India, the impact is being seen in the form of reducing rainfall during the winter-spring season (November to April). “Climate model simulations indicate that continued warming of the Indo-Pacific Ocean is highly likely, which may further intensify these changes in global rainfall patterns in the future,” Roxy Mathew Koll, a climate scientist at the Pune-based Indian Institute of Tropical Meteorology (IITM), and a leader of the study.

Asked if the changes in MJO behaviour are resulting in any impact on rainfall during the summer monsoon (June to September) as well, Koll said, “During summer season, the warm pool waters cover the equatorial and north Indian Ocean. It is hence important to extend this study to see if there are similar changes in the summer warm pool, which may impact the summer monsoon rains over India.”

Vimal Mishra, a climate scientist at IIT Gandhinagar who wasn’t associated with the study, said “the expansion of the warm pool due to anthropogenic warming has implications on climate and weather in many regions of the world. Due to this expansion, the MJO duration has gone down and this can reduce the rainfall in the Gangetic plain.”

“It is noteworthy that previous studies have shown that decline in the rainfall in the Gangetic Plains is linked with the warming of Indian Ocean,” Mishra continued. “But the new study shows that it is multi-dimensional impacts of climate warming that lead to changes in the mean and extreme rainfall. It has further indicated the need of more work on understanding of the changing complexities of the summer monsoon under the warming climate.”

Also read: What Does a Water Body Near Antarctica Have to Do With the Monsoons?

Koll added that “we need to enhance our ocean observational arrays to monitor these changes accurately, and update our climate models to skilfully to predict the challenges presented by a warming world.”

Though the entire Indo-Pacific region has warmed, the warmest waters are over the west Pacific, creating a temperature contrast that drives moisture from the Indian Ocean to the west Pacific maritime continent, enhancing cloud formation there.

MJO is basically a band of rain clouds moving eastward, traveling a stretch of 12,000-20,000 km over the tropical oceans. The warming ocean pool has altered its life cycle. The residence time of MJO clouds has shortened over the Indian Ocean by four days (from an average of 19 days to 15) while it has increased over the west Pacific by five days. This change has altered the weather patterns across the globe.

Also read: Up Above the World so High, Climate Change Could Kill Some Clouds in the Sky

“There are coordinated international efforts underway to extend the range of accurate weather forecasts out to lead times of two to four weeks and the MJO is one of the most important keys to the success of this enterprise,” Michael McPhaden, a member of the study team and a senior scientist at the US National Oceanic and Atmospheric Administration, said.