A recently launched report shows the city's air quality is worsening due to thermal power plant emissions and the absence of environmental policies. 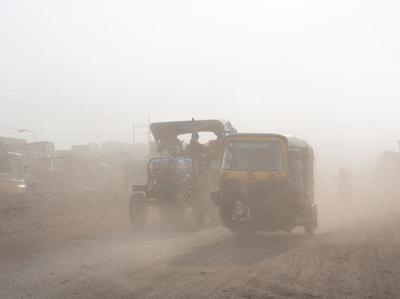 Varanasi had no good air quality days in 2015. Credit: PTI

While national attention has been focused on the heavy blanket of smog smothering Delhi, other cities, especially along the Indo-Gangetic plain, have been choking on the same pollution, often experiencing more intense levels of particulate matter in the air than the capital.

On December 12, the Centre for Environment and Energy Development (CEED), IndiaSpend and Care4Air launched a report titled Varanasi Chokes to highlight the city’s high pollution levels and also bring attention to cities such as Allahabad.

According to data from the Central Pollution Control Board (CPCB) Varanasi and Allahabad both had a grand total of zero good air quality days for the entirety of 2015 and Varanasi is also one of the three most polluted cities in the country.

However, in its annual list of the most polluted cities in the world, the WHO did not identify Varanasi despite listing four other Indian cities – New Delhi, Allahabad, Kanpur and Firozabad – based on its data. 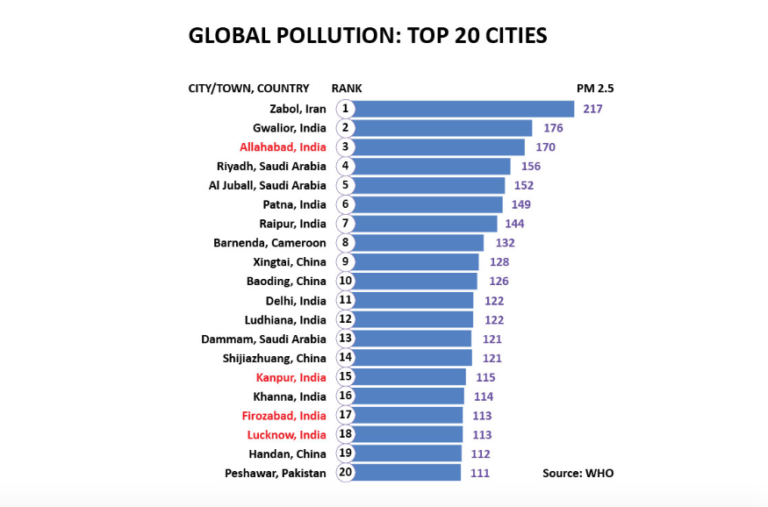 The WHO’s report on air quality in 2015. Courtesy: Aishwarya Madineni

The inconsistency in these lists arises from the fact that Varanasi lacks an adequate number of air quality monitors to provide researchers with consistent and reliable data. According to the report, “Only one online air quality monitor, capable of measuring PM2.5 and PM10, has been installed while no AQI (Air Quality Index) score is available for the city. In comparison, Delhi has 13 online monitoring stations capable of measuring PM10 and PM2.5 and an AQI score is available every day. RTI on manual air quality stations in Varanasi revealed significant gaps in PM10 values being recorded.”

The report highlighted the impact of coal-powered thermal power plants on Uttar Pradesh’s worsening air quality. The Purvanchal region of the state is home to 11 thermal power plants that produce emissions which are then carried several hundred kilometres due to changing wind patterns in the Indo-Gangetic plains, according to a study conducted by the Delhi-based Urban Emissions group.

Meanwhile, pollution in Varanasi has led to higher incidences of respiratory diseases among residents. Dr. Pradeep Jindal, a paediatrician who practices in Varanasi and spoke at the event, noted that “air pollution has caused an eight-fold increase in respiratory illness[es] in the children of Varanasi and the respiratory problems are at their worst in the winters.”

Another doctor, R.N. Vajpayee, a pulmonologist in Varanasi, was quoted as saying, “There has been 20-25% increase in cases of asthma and breathlessness.”

Speaking during a round-table discussion on air pollution in New Delhi, John Walke, from the Natural Resources Defence Council (NRDC) pointed out that the harmful particles in the air don’t just have an impact on the respiratory system but are also known to have cardiovascular effects. Walke also said that PM2.5 has been linked to premature deaths in other countries and is now known to be a carcinogenic substance that can cause lung and bladder cancer.

Kim Nolton, also from the NRDC, highlighted another worrying aspect of air pollution’s impact on our health: It can severely hamper the physical and cognitive development of children, causing irreversible damage. Nolton said, “I’m really quite concerned for our youngest, our children. Damage today lasts a lifetime.”

While no concrete action has yet been planned or implemented to improve Varanasi’s air quality, at a recent event held in the city, representatives from various political parties pledged to include the issue in their manifestos for the assembly elections.

At the workshop to launch the Varanasi Chokes report, Ekta Shekhar from Care4Air, urged action saying, “Varanasi does not have a comprehensive action plan on air pollution. Immediate steps need to be taken to curb air pollution. And this action cannot be in isolation, cities and states need to work together to formulate a regional action plan to improve air quality.”