Is the Uttarakhand Tragedy Tied to Rawat Govt's Move to Reduce Water Flow from Hydro Projects?

In 2018, the Centre had fixed environmental flow of the Himalayan Ganga at 20-30%. However, the Rawat government asked this limit to be further reduced to avoid monetary losses. 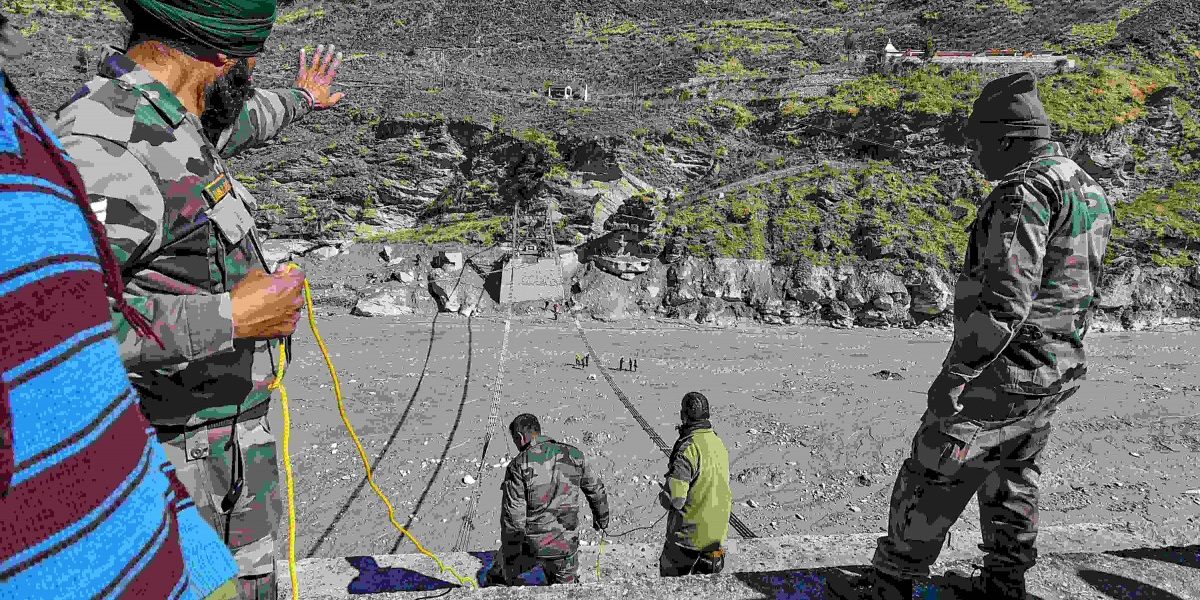 Indo-Tibetan Border Police personnel carry out search and rescue operation near the damaged Tapovan hydel project tunnel, after the glacier burst in Joshimath causing a massive flood in the Dhauli Ganga river, in Chamoli district of Uttarakhand, February 11, 2021. Photo: PTI.

The massive flash floods triggered by a snow avalanche in Uttarakhand’s Chamoli district recently and the extensive damage that ensued were a tragic reminder of the 2013 Kedarnath disaster.

Questions are now being raised about why the Centre and the state government did not learn any lessons from previous calamities and allowed ‘development’ work to continue unabated in highly sensitive Himalayan zones. The cost of this is very high – the recent disaster claimed the lives of a large number of labourers.

While Prime Minister Narendra Modi and Uttarakhand chief minister Trivendra Singh Rawat expressed solidarity with people and assured them that they are doing everything possible to solve the issue, these claims are contrary to the decisions taken by the government regarding the construction of hydropower projects on rivers and the regulated discharge of water.

Nearly two years ago, the Rawat government wrote a letter to the Centre stating that the rules regarding water discharge from these projects should be relaxed as the projects are incurring losses worth thousands of crores of rupees owing to it.

Also read: In Photos: The Broken Uttarakhand Glacier and Its Aftermath

Deciding on the quantum of e-flow

The Ministry of Water Resources, River Development and Ganga Rejuvenation (MoWR,RD&GR) – now Ministry of Water Power – issued a notification in October 2018, according to which the environmental flow (E-flow) of the Himalayan Ganga was fixed at 20-30%. Meaning, it was made mandatory for all hydroelectricity projects situated on the upper streams of the Ganga to release 20-30% of water into the river at different times.

According to the definition of the International Union for Conservation of Nature (IUCN), E-flow is the water provided within a river, wetland or coastal zone to maintain ecosystems and their benefits where there are competing water uses and where flows are regulated.

To put it simply, environmental flow is the minimum flow required to sustain a river. It refers to the minimum amount of water required for the health of the river and the livelihood of its aquatic organisms such as fish, crocodiles, dolphins, etc. The concept is internationally viable.

However, the Uttarakhand government opposed this provision issued by the Ministry of Water and asked this limit to be further reduced as otherwise the project would incur heavy monetary losses. 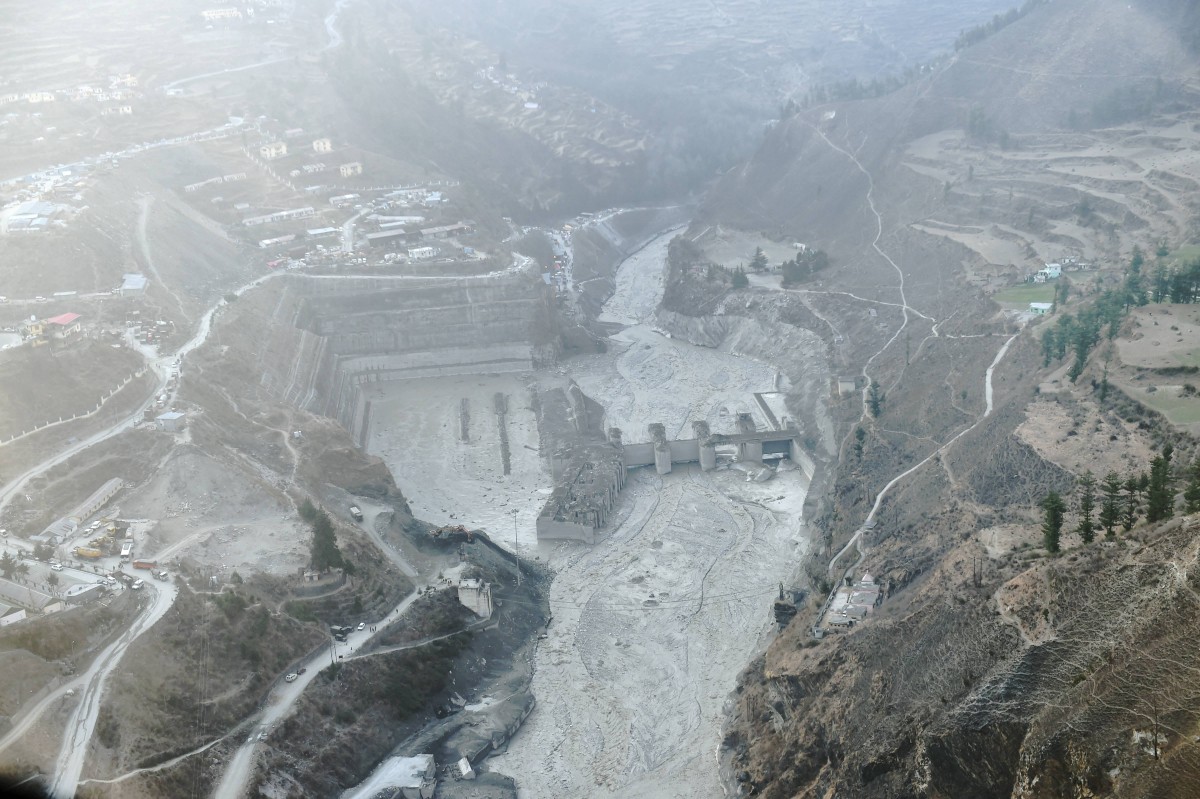 Official documents obtained by The Wire reveal that the chief secretary of Uttarakhand had told the National Mission for Clean Ganga (NMCG) – a unit of the Ministry of Water Resources – that the current E-flow discharges will result in the projects in the state incurring losses of about Rs 3,500 crore.

In his letter dated January 4, 2019, the chief secretary had said, “E-flow discharges prescribed by the MoWR,RD&GR will lead to a loss of about 25%, making most of the projects unviable and incur revenue loss of approximately Rs 3,500 crore.”

Accordingly, the Uttarakhand government asked to review the quantum of E-flow in the notification or viability gap funding for the hydropower projects.

The Ministry of Water Resources released a policy paper on E-flow in February 2017, based on which E-flows were prescribed for the upper streams of the Ganga river (from Devprayag to Haridwar).

In the paper – written by Dr Sharad Jain, scientist (level ‘G’) of National Institute of Hydrology, Roorkee, along with professor A.K. Gosain of IIT Delhi and N.N. Rai, director of Central Water Commission (CWC) – it was recommended that the E-flow should be maintained at 20% between November and March, at 25% in April, May and October, at and 30% between June and September.

The group said that this amount of e-flow into the river would ‘fulfil the needs of the river’. 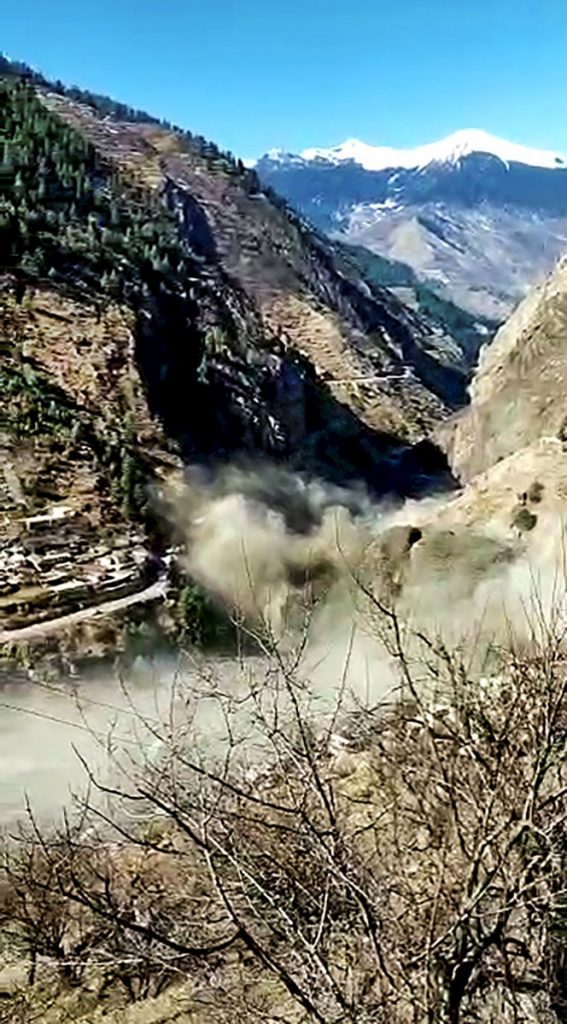 Avalanche after a glacier broke off in Joshimath in Uttarakhand’s Chamoli district causing a massive flood in the Dhauli Ganga river, Sunday, Feb. 7, 2021. Photo: PTI

However, experts and environmental activists claimed that the prescribed E-flow is not adequate, and if the river is to be revived, then more water should be released from the hydroelectricity projects.

The Uttarakhand government, however, believed that the prescribed E-flow would be adequate.

The chief secretary said that the E-flow during monsoon season may be considered as 25% of the average discharge, while the Centre had prescribed 30% E-flow for this period. While the Centre had set the E-flow against the total flow in a month, the Uttarakhand government calculated it on the basis of four monsoon months cumulatively.

Similarly, it was recommended that during lean months, E-flow release may be 20% instead of 25%.

In addition, the chief secretary of the state also demanded that silt flows be considered as contributions to E-flow and additional releases be made as per local administration’s demands.

However, a major aspect of E-flow is that it should be continuous or uninterrupted.

The Uttarakhand government had also refused to implement the National Green Tribunal’s (NGT) order to ensure minimum E-flow of 15%.

According to a report of the parliament’s standing committee on energy released in January 2019, the Uttarakhand government said, “The Ministry of Water Resources has announced 20-30% E-flow, which is very high. If we implement the NGT order as well, then on the basis of previous capacity, we will incur an annual loss of Rs 120 crores, leave aside the required new capacity. As far as the latest order is concerned, it will completely destroy the hydroelectricity sector.”

He said that since these rules apply to the upper reaches of the Ganga, Uttarakhand will suffer the most damages.

The Uttarakhand government told the committee that they have undertaken construction projects of about 18,000 megawatt (MW) of hydroelectric projects in the state. Out of these, projects of 4,000 MW have been completed, projects of 1,640 MW are under construction and projects of 12,500 MW will be built in the coming years.

Also read: Absence of an Early Warning System Cost Many Lives at Joshimath

Environmental experts have expressed deep concern over the earlier projects and hold them responsible for the disasters. In such a situation, if construction work is undertaken for other projects as per the state government’s wishes, it is likely to pose a serious threat to the environment.

As articulated above, environmental flow is necessary for the health of the river and the livelihood of its aquatic organisms.

But the construction of hydroelectric projects on rivers affects the amount of water in the river. With e-flow, the uninterrupted flow of a river is ensured. The Union Ministry of Water Resources had even coined the slogan of ‘aviral se nirmal Ganga’ (‘Continuous Ganga is clean Ganga’) for it.

After a mushrooming of hydropower projects, there have been demands for ensuring adequate environmental flow in the rivers across India during the last few years. Between 2006 and 2018, at least 12 reports were prepared at various levels in this regard but a consensus could not be reached as experts had different opinions about the amount of e-flow.

In a previous analysis, The Wire had explained how the government did not accept the recommendation of a committee to increase E-flow in the river, even though then Union Minister Uma Bharti had approved it.

Also read: When It Comes to Ganga’s Health, the Centre Has Ignored Several Key Reports

Besides, the report on the basis of which the government has formulated these laws, does not assess any primary (new) data. Instead, it was recommended after analysing various earlier studies on E-flow.

In short, four reports for hydropower projects have recommended about 50% E-flow while three other reports have suggested maintaining the E-flow at 20-30%. The Ministry of Water Power considered only the latter worth implementing.

The notification of the government regarding E-flow issued in October 2018 was termed “inadequate” and challenged in the Uttarakhand high court.

Rescue operations underway near the Rishi Ganga Power Project, a day after a glacier broke off in Joshimath causing a massive flood in the Dhauli Ganga river, in Chamoli district of Uttarakhand, Monday, February 8, 2021. Photo: PTI/Arun Sharma

What do the experts say?

Vinod Tare, a well-known environmental expert and convener of the seven IIT groups that have prepared the report on the E-flow of Ganga and other aspects, said the notification was issued based on the assessment of the CWC. “CWC has its own understanding, we do not agree with it. They have arbitrarily fixed this E-flow,” he said.

“The reality is that we do not yet have enough data which can accurately tell how much e-flow should be there,” said Tare. “First, the government will have to notify the definition and methodology. Later, its volume will be calculated. They claim that even if what they did is little, it is better than nothing. But the fact is that it is all futile.”

In its report, the IIT group led by Tare recommended about 50% environmental flow for the upper reaches of the Ganga. In 2015, the findings of this report were approved by a three-member committee set up by the Ministry of Water Resources. They demanded the ministry to implement its recommendations. This report was also approved by the then Water Minister Uma Bharti.

However, the ministry did not implement it and after Uma Bharti’s departure, the government led by Nitin Gadkari announced the current E-flow on the basis of this report.

It is noteworthy that the methodology suggested in the February 2017 policy paper was similar to the one adopted in the report presented by the IIT group, but there was considerable difference in the recommended E-flow.

Vinod Tare says that although the devastating floods in Uttarakhand cannot be directly ascribed to a reduced E-flow, it plays a crucial role in determining the ecology as a whole.

Also read: In Uttarakhand Disaster, the Handiwork of Climate Change Is Unmistakable

However, Shashi Shekhar, former secretary of the Ministry of Water Resources and a member of the 2015 committee that recommended the E-flow, blames insufficient E-flow for the Chamoli tragedy.

He said, “We definitely view this tragedy as connected to E-flow. The Himalayas are the most recent mountains and they are still developing. Their soil and stones are extremely weak and loose. As a result, a lot of water seeps into the gaps between the stones and when the water melts, the ground sinks. The construction of tunnels in such a terrain renders the surface quite loose.”

“The presence of cracks in a glacier means that frequents blasts have rendered the mountains loose,” he said. “When the glacier slides back, it leaves behind stones, mud, etc. and it comes down all at once. It moves as a turbulence, destroying everything in its path. No hydraulic project should have a height exceeding one km.”

The former secretary of the Ministry of Water Resources said that while water is a complex subject, bureaucrats have limited knowledge. Hence, they are not eligible to take any decision in this regard. “First, there should be an ecologist, the rest should be included later,” he said.