Two New Species, and Two Genera, of Lizards Found in the Western Ghats

“Our understanding of diversity of these animals is highly underestimated.” 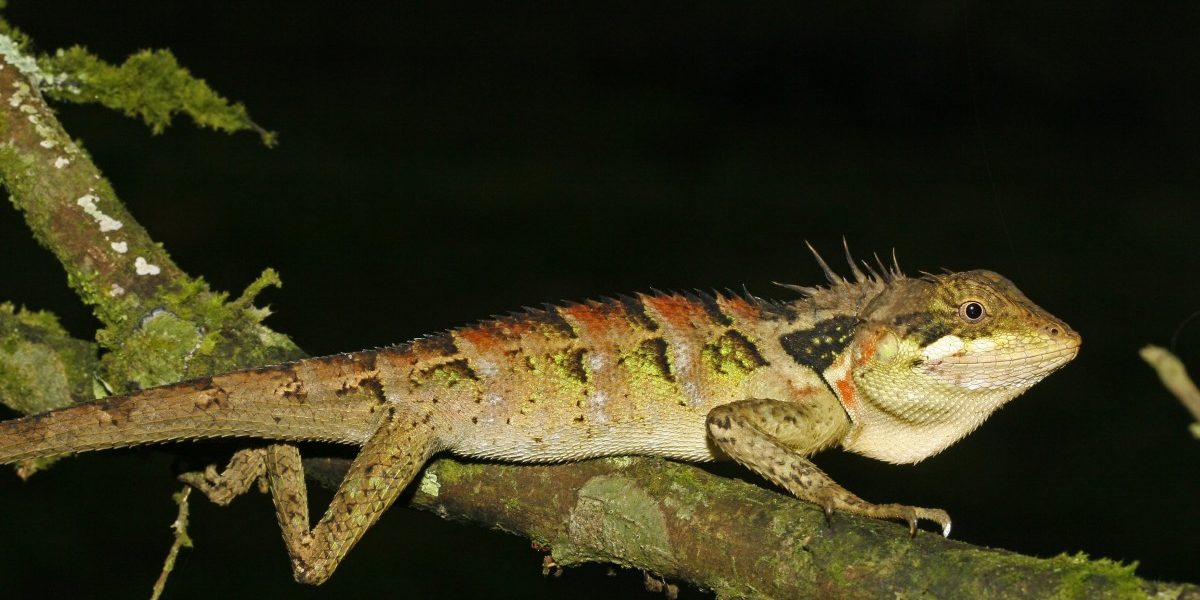 In 1982, Dale Marcellini, the curator of herpetology at the National Zoo in Washington, DC told the Washington Post, “Lizards are somewhat social, more complicated. They’re the intellectuals of the reptile world.”

The Western Ghats seems to host such intellectuals of different persuasions, and continue to reveal the evolutionary wonders of species it is home to.

In a recently published study, researchers say Calotes – the genus to which garden lizards belong and are found in the Western Ghats – are actually related to three different clades, groups of organisms that share a common ancestor.

In all, they have found two new genera and two new species, both of lizards.

Of these three groups, two are endemic to the Ghats, and which the researchers have named new genera called Monilesaurus (‘lizards with a necklace’) and Microauris (‘lizards with small ears’). They identified two species not known earlier within the genus Monilesaurus and named them as Monolisaurus acanthocephalus (‘spiny headed’) and Monolisaurus montanus. The former is from the Meghamalai hills while the latter dwells in the wet, green high-elevation forests of Kundremukh to the Nilgiri hills of the Ghats.

“This work has opened my eyes to the importance of geography and climate,” Saunak Pal, researcher at the Bombay Natural History Society, Mumbai, and the lead investigator of the agamid project, said, “along with the history of a landscape to the distribution of species. It is amazing how these species, which evolved millions of years ago, have used the variability in [their] habitat to their advantage.” Pal is interested in the origins of the staggering diversity of the Ghats, and the questions of why some species are native to the Ghats, others are not and what causes such diversity. 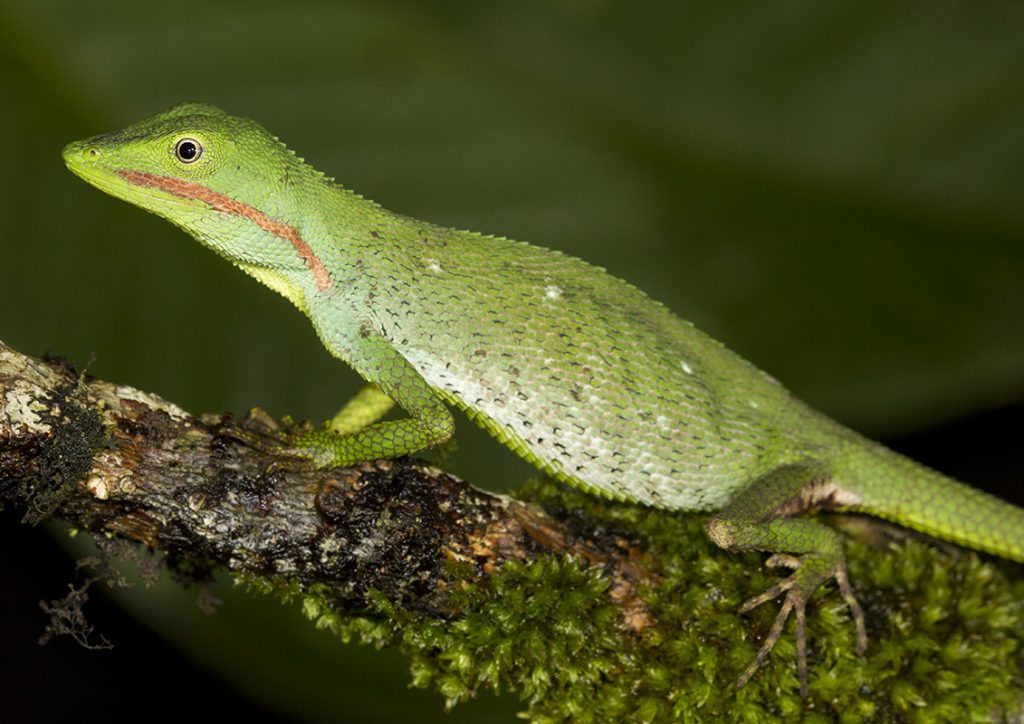 The Calotes lizards belong to family Agamidae and are one of the most common lizards in the world, found all across South Asia, Southeast Asia and southern China. Their size varies from medium to large. They climb trees and many of the species live in trees. They have large scales on their bodies, well-developed spines on their necks and backs. Males and females look different: the males are larger and have brightly coloured necks and backs, and they put up a great show of colours during the breeding season.

Their habitat covers huge swathes of Earth’s landmass. For instance, Calotes versicolor, commonly called the garden lizard, lives in various types of forests and also in human-dominated landscapes. If you’re looking out your window, you’re likely to find a C. versicolor performing its push-ups. Calotes grandisquamis and Calotes nemoricola, on the other hand, call the Ghats their home.

Scientists have used molecular studies together with traditional taxonomic tools to help unveil the various strands of lizard diversity, and have describe six out of 26 Calotes species in the last decade mostly from southeast Asia and Sri Lanka.

According to Pal, “Our understanding of diversity of these animals is highly underestimated.”

He recounts the experience of finding lizards during their fieldwork in the Ghats and how they came upon Microauris aurantolabium.

At first, the reptiles seemed similar to Calotes. But their very small tympanum (ear) and the lack of pointed spines on the neck (as in Calotes) intrigued them. In addition, those lizards lived only in high-elevation forests. In one field sampling in the Agasthyamalai hills, they found a single individual of this type. Although the lizard had been sighted only once before – 12 years earlier, from the Kallakad Mundanthurai Tiger Reserve and later named Calotes aurantolabium – Pal says, “Nothing is known about the behaviour or ecology of this lizard.”

Molecular analyses showed that this lizard doesn’t belong to the Calotes family but to a newly identified group: Microauris aurantolabium. “We presume this might be a lizard confined to tree tops and hence it went un-noticed all these years,” Pal says.

Their sampling and analysis also showed that lizards belonging to the genus Psammophilus, or ‘rock agamas’, have stronger evolutionary links with Monilesaurus (‘lizards with a necklace’) than with Calotes.

Rock agamas are large bodied lizards found commonly near dry and rocky habitats. They frequent rocks and boulders of the plateaus in peninsular India. The males are much larger than the females, and possess a yellow to red head and neck and a dark grey-black body. The females are grey-black with lighter spots, according to Pal.

Also read: The Seven-Decade Transnational Hunt for the Origins of a Strange Indian Disease

Pal and his team have effectively revised the Calotes systematics, first described in 1817. “The joy of seeing a lizard recorded only once earlier, that too years back… of finding organisms known only from a few lines written in books published hundreds of years ago, was unimaginable,” he said.

They are small to medium sized agamid lizards that superficially resemble the Calotes but differ in having smaller scales, reduced spines on the back and a distinct fold of skin across their neck. Like the Calotes, these lizards also show sexual dimorphism, with the males developing a bright red throat and head during the breeding season.

Molecular studies help researchers determine if they have spotted a new genus. They consider monophyly – having a common ancestor and sharing similar characteristics unique to the group – as a criterion for the existence of a genus. 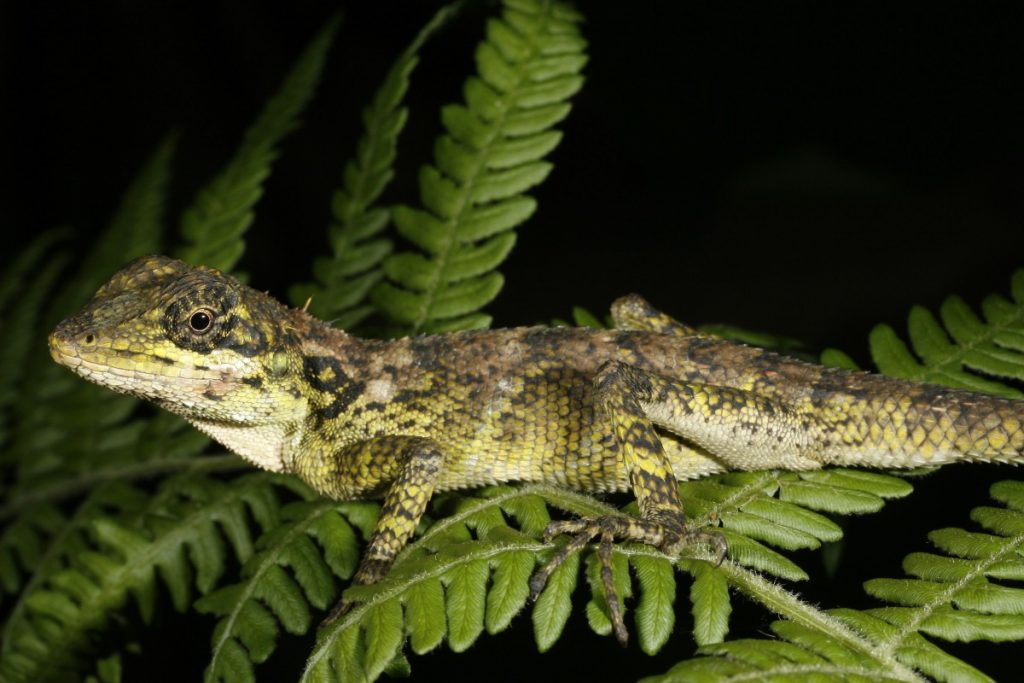 The thrust of this study is that, Pal explains, the species earlier known as the Calotes didn’t form a monophyletic clade because some of them (ones now identified as Monilesaurus) are more closely related to the rock agamas (genus Psammophilus) than to the Calotes members.

“We also found that Microauris aurantolabium is evolutionarily distinct and not closely related to members of Calotes, as was thought earlier. These insights led us in designating these two new genera.”

V. Deepak, a conservation biologist at the Indian Institute of Science, Bengaluru, and one of the study’s authors, says, “While we based our classification on traditional comparative morphology, molecular data was crucial for us to decide on these classifications. The newly described genera and species formed a well-supported monophyletic clade, which gave us further confidence in our classification.”

For Varad Giri, a postdoctoral research fellow and curator of herpetofauna at the National Centre for Biological Sciences, Bengaluru, who was not involved in the study, the main takeaway is that “the species we commonly see and assign names indeed belong to a different group with a unique evolutionary trajectory. These endemic lineages, which were hitherto believed to be part of a widespread group, are now considered unique, which proves the exceptionality of this landscape.”

While the revised systematic positions of these lineages revive our understanding of Indian agamids, Giri says “the integrated approach of serious taxonomy and systematics followed in this study places these unique and endemic agamids in a global perspective.”

“These new genera and species are indeed a great finding and they open new avenues for researchers to further study the distribution, ecology and natural history of these new species. We know nothing about these other aspects of any reptiles in India except their names.”

The study was published in the journal Zootaxa on September 19, 2018.