This is the first and only evidence of a snake changing its colour in response to industrial contamination. 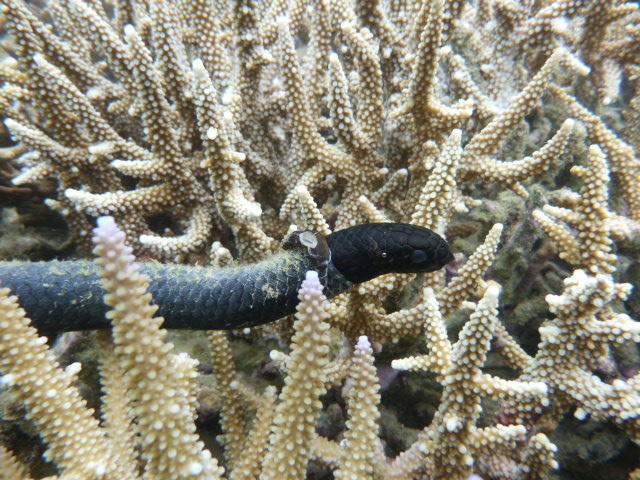 Turtle-headed seasnakes (Emydocephalus annulatus) in polluted waters are changing colour. Creatures of the Indo-Pacific coast, they usually have high contrast black and white bands or blotches encircling their bodies from head to tail.

While snorkeling in the shallow Nouméa lagoon of Grande Terre Island, New Caledonia, more than 1,000 km east of Australia, evolutionary biologist Rick Shine of the University of Sydney and his family observed unusually black turtle-headed seasnakes. Back then, in 2003, males, the smaller of the sexes, seemed more prone to melanism (80%) than females (54%). These waters are polluted by runoff from nickel mining, the largest employer in this French protectorate. Besides the black seasnakes, Shine observed some retained faint bands. What’s causing the startling white rings to disappear?

Dark colours absorb heat, a useful trait for land reptiles in cold countries. But dark aquatic snakes gain no advantage because water is not a conductor of heat, says Shine. Nonetheless, entire populations of black individuals frequent the waters of Saumarez and Ashmore Reefs, Australia. However, in New Caledonia, the banded phase is prevalent and black snakes were not common in earlier years.

Turning black in response to pollution, a phenomenon called industrial melanism, afflicts many creatures, chief among them insects. With soot settling on their environment, several species of light-coloured moths stood out and became an easy meal for insectivorous birds. A surfeit of melanin turned some of them coal black. Since these insects matched sooty surfaces, they evaded predators. First recorded in 1848 in Manchester, UK, dark peppered moths (Biston betularia) became common within 50 years, almost replacing the speckled light phase.

However, black turtle-headed seasnakes don’t restrict themselves to backgrounds that match their body colour. When banded creatures move, they create an optical illusion: They seem to travel in the opposite direction and thus evade their killers. So losing bright bands wouldn’t be to the turtle-heads’ advantage.

Nor could black confer any advantages in catching prey. All males, females and the young scrape fish eggs off coral, and they don’t have to lie in ambush since their meals aren’t about to escape by swimming away.

“Initially I thought it might relate to habitat differences and camouflage; then perhaps mate choice and sexual selection,” Shine told The Wire. “But we gathered a lot of data, and neither of those two ideas worked out.”

What then could be the reason for the colour change? The explanation for why snakes of the same species living in the same lagoon have different colours had to wait 14 years.

In 2014, researchers from France published a study of pigeons becoming darker because of pollution. It wasn’t a result of soot settling on the Parisian birds’ plumage and making them dusky. Instead, contaminants such as zinc stuck to melanin in the darker feathers. This ability to detoxify their internal organs of harmful chemicals by shunting them to their feathers allowed dark-coloured birds to become more successful in cities than pale ones.

“I read the pigeon paper shortly after its publication, and I immediately thought that the link between pollution and melanism could explain why so many Emydocephalus annulatus were black,” Claire Goiran, a marine biologist at the University of New Caledonia, Nouméa, told The Wire. 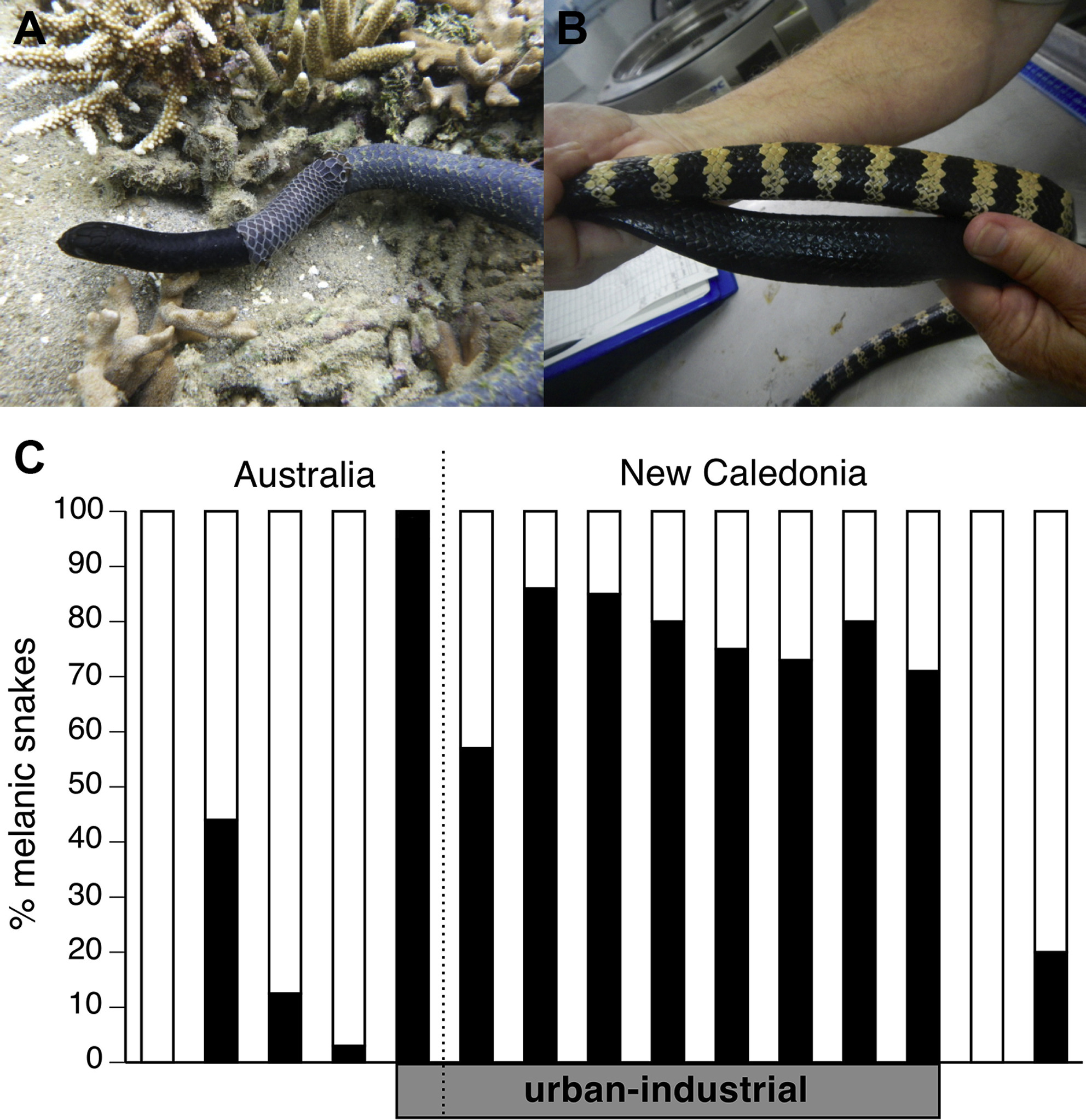 (A) Emydocephalus annulatus (melanic specimen sloughing). (B) Melanic and banded E. annulatus from a peri-urban population near Noumea. (C) Frequencies of melanism in snakes from urban-industrial sites versus other areas.

Goiran and Shine compared 1,400 specimens that Shine had collected over 13 years. The samples came from the polluted waters along the coast of New Caledonia and the clear seas of Barrier Reef atoll in Australia. An overwhelming majority of the black seasnakes came from contaminated waters, while the ones in non-industrial areas had stark bands.

When pollutants enter their systems through their diet, they collect in the snakes’ skins. For instance, the shed skins of corn snakes contained high levels of lead, cadmium and mercury after researchers fed them contaminated mice.

In addition, seasnakes could also absorb chemicals from the water through their skins. All these contaminants, within their bodies and outside in the environment, accumulate in the skins just as they collect in pigeons’ feathers.

Shine and his colleagues found higher concentrations of trace elements in the shed skins of jet black turtle-headed seasnakes. Of the 13 pollutants they detected, five – cobalt, manganese, nickel, lead and zinc – were especially concentrated at levels that could cause health problems in mammals and birds. Even in banded ones, the black sections of the sheds had more contaminants than the white sections. Becoming black appeared to be a way of excreting pollutants.

Black snakes shed their skins oftener than pale ones because algal spores tend to accumulate on dark surfaces. If they didn’t slip off their skins, growing algae create drag, slowing down the snakes. In toxic waters, this frequent sloughing would not only get rid of algal spores but also the adhering contaminants.

Such adaptation to human activity can be rapid. In peppered moths, the mutation for black colour occurred as recently as 1819, nearly three decades before the first record. In turtle-heads, the researchers suspect the mutation for melanism is unique to the species. Seakraits (Laticauda sp.) are similarly banded, but the mutation to make jet black individuals may not have occurred yet even though Goiran and Shine found pollutants in the dark-ringed sections of their sloughs.

This is the first and only evidence of a snake changing its colour in response to industrial contamination.

Since pollution would affect both genders, why are males overwhelmingly melanistic?

“The sex bias isn’t very strong, and I haven’t looked at the data recently – the difference may even have disappeared,” says Shine. “But if it’s real, it might reflect the fact that male and female turtle-heads feed in different seasons, on the eggs of different types of fishes. One type may well have more pollutants than another.”

Despite the number of black seasnakes they observed, the Shine family didn’t catch a black-coloured juvenile. All the youngsters they caught were brightly banded, but Shine doesn’t think they change colour in their lifetime.

Since black turtle-heads are better at coping with pollution, it’s possible they may outnumber the banded ones just as dark peppered moths replaced light ones. However, this blackening of a species may not be irreversible. With stricter laws to check pollution in Britain, the light-coloured peppered moths are returning. Turtle-heads probably could retain their vivid banded forms off the New Caledonian shore if contaminants didn’t spill into the sea.

The study was published in the journal Current Biology on August 10, 2017.