The Trials and Tribulations of the Andaman Fisheries

In a time of dwindling stock, why are Andaman fisherfolk still spending time and money trying to catch fish? 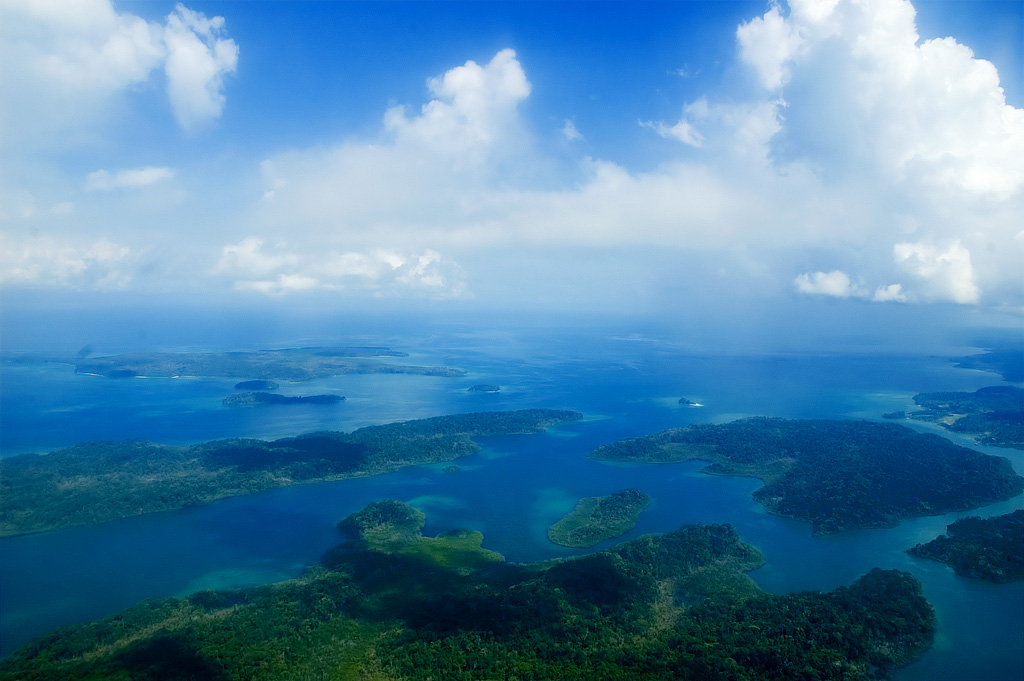 Vardhan Patankar
Environment
The Sciences
18/May/2018

“Let your hook always be cast. Some fish will eat the bait and the free food will come your way”.

This was a popular belief in the Andaman islands until recently. However, these days, not even a nibble is guaranteed. Senior fishermen speak of dwindling catch and how they are struggling to make ends meet. Why then are these people still spending time and money trying to catch fish? The simple version of the answer: they are hopeful. They are responding to changes in supply and demand, seeking new markets, exploring new and deeper waters.

The complicated version, however, is wrapped up in the global economics of seafood – an area of study that, while still in its infancy, must be understood to save the remaining fish stock of the Andaman islands.

The early history of commercial fisheries focused on Trochus and sea cucumbers, and then shifted to sharks, crabs and pelagic species. However, in the last decade, there has been a major shift, from subsistence fisheries to fisheries to meet the demands of new markets, driven by a species of grouper fish: Plectropomus leopardus, commonly called the dollar fish or coral trout. The demand for this fish rose in early 2000. Once considered to be ‘trash’, the dollar fish suddenly started selling for a higher price because eating a red-coloured fish is considered to be a sign of prosperity in China, where nearly all of these fish are headed. Today a significant proportion of the landed fish stock is exported to Southeast Asia. 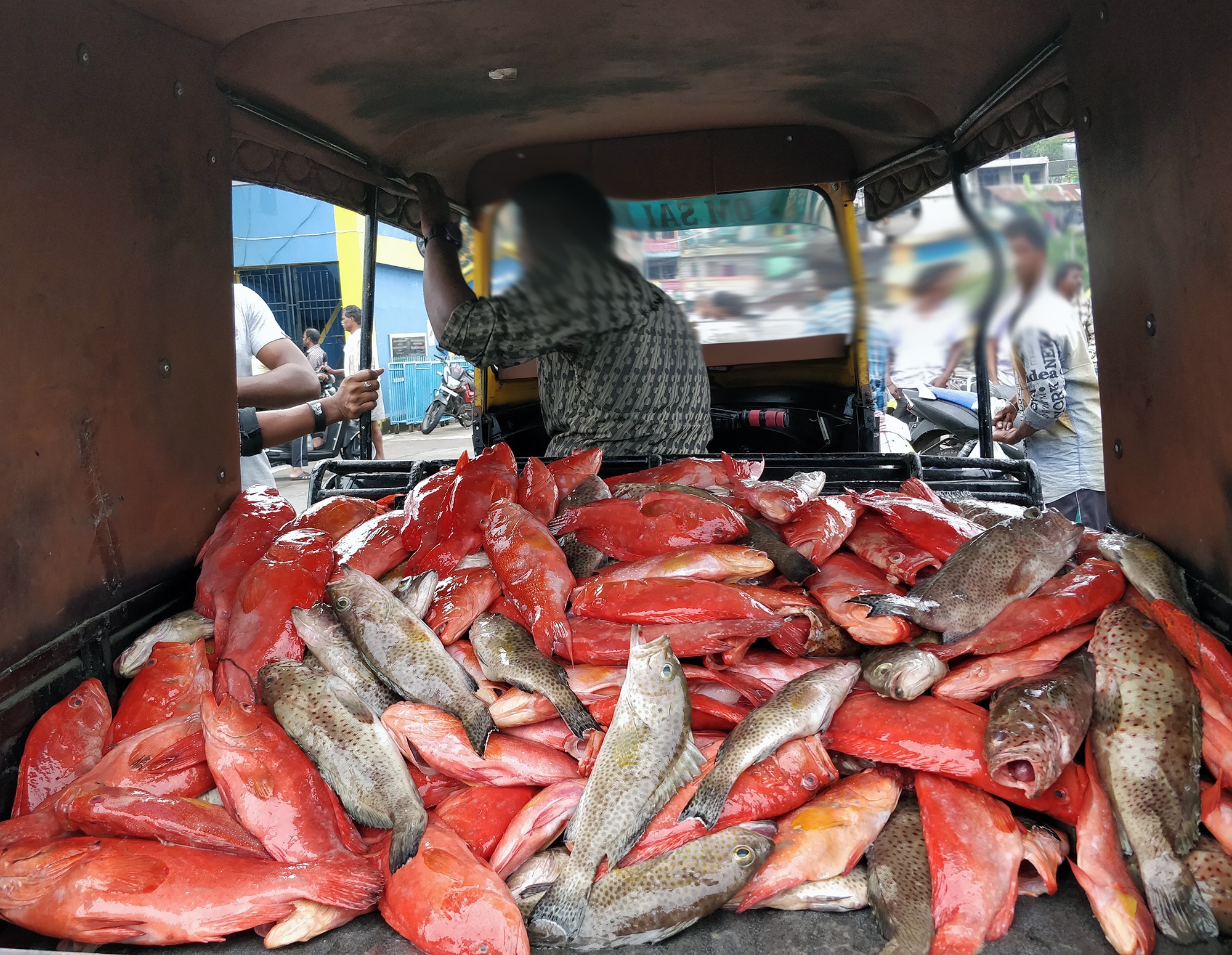 The most common gear for catching dollar fish is a hook-and-line. The hook is set to cast, the fish nibbles on the bait and is snared in the process. Along with dollar fish, many other fish get caught nibbling the bait, including snappers, barracudas, jacks and sharks. Most of these fish are top predators of the sea: they feed on smaller fish and invertebrates like crabs, shrimps and lobster. They play an important role in maintaining the health of coral reef ecosystems. Their deaths can, and do, have bitter consequences for an island marine ecosystem.

The Andaman islands were hit by the tsunami in 2004. The memory of local people divides the islands into ‘before’ and ‘after’ the tsunami. And immediately after the tsunami, the fisheries took a toll as many small-scale fishermen lost their boats and nets to the vicious waves.

The islands’ administration has promoted this archipelago for tourism and the fisheries department has worked to rejuvenate the fisheries. Resorts and restaurants have mushroomed to cater to tourists, most of whom preferred eating fish with tender meat. As a result, the demand for prawn, crab, travelly, barracuda and snapper fish has ballooned and further stressed the islands’ fish stock.

Global warming has exacerbated this situation. The ocean is becoming warmer and, as carbon dioxide levels rise, more acidic, rendering the water inhospitable to marine species. These conditions also foster algal blooms that heightens the demand for a limited supply of nutrients in the water. Apart from the tsunami, three major coral bleaching events have also adversely impacted the reef ecosystem.

Some have suggested fish farming as a solution – a ‘blue revolution’ to mirror M.S. Swaminathan’s green counterpart. In the Andaman islands, scientists have tried to rear commercially important species, such as the grouper, in cages in the Chidiya Tapu region. Young fish are reared in aquariums and later allowed to grow in seawater inside cages. Once they reach a certain size, they are harvested as fish stock. However, various studies have shown that the cage culturing is easier said than done: it requires a lot of maintenance and comes with its own host of ecological problems.

So, should we eat certain fish species or should we be selective in our choices? It’s a fact that catching fish out of the sea impacts the environment. Yet wild-caught fish are free from additives, and the act leaves behind a smaller carbon footprint than pork or beef. Unlike some sectors of the farming and aquaculture industries, wild fishing doesn’t depend on doping fish with antibiotics, the gross simplification of habitats or on animals reared in intensive care environments. Studies have also shown that fish – like other animals – compete, cooperate, breed and migrate, and that they are sentient beings.

There is considerable knowledge on fisheries management from other parts of the world. In mainland India, the ‘Know your Fish’ and the ‘In Season Fish’ programmes encourage consumers to make informed choices when it comes to eating fish. Other programmes in the West endorse, and encourage fishermen to practice, sustainable fisheries and even issue licenses based on the fishing practices they follow.

Setting up marine protected areas (MPA) – i.e. liberating a part of the seascape from any human activity – is known to have a long-lasting impact on the fisheries sector. MPAs can act as safety valves as well as treasure troves of marine life. Fish can prosper in them before spilling over into “unprotected” territory.

In the Andaman, there are two prominent MPAs: the Rani Jhansi Marine National Park in Ritchie’s archipelago and the Mahatma Gandhi Marine National Park (MGMNP), South Andaman. There are also 105 protected islands where fishing is prohibited. However, most of these areas function as mere paper parks. Fisherfolk who live on the fringes of these MPAs have complained that their livelihoods are being ignored; others allege the ‘parks’ don’t properly comply with regulations. In all parks except the MGMNP, patrolling and monitoring is weak and the law is not enforced properly. In this scene, poaching has also continued uninterrupted.

The Andaman and Nicobar Islands encompass multiple habitat types support a range of fisheries. They are also home to various indigenous communities that have relied on marine resources for subsistence for centuries. People from different parts of India have also settled these islands, and each community follows different practices. Mindful of this diversity, the Andaman islands will require different management strategies for different contexts.

At present, only one species of fish (the giant grouper) and seven species of sharks and rays are protected under the Indian Wildlife (Protection) Act, 1972. Fishery monitoring agencies have been collecting coarse landing statistics of fish groups. However, the data does not differentiate between species or even families. Documentation of the status and impact of fishing practices is also limited.

A shortage of trained manpower to handle fisheries also highlights a need to improve how information is disseminated so that more efficient management strategies can be worked out. Given the potentially negative consequences of catching one particular fish species, such as the dollar fish, an ecosystem-based approach to fisheries management can be a way forward. While a bit vague, the idea is to consider the habitat of fish when making management decisions.

From the ecosystem’s POV, it is important to know how overfishing one species could affects another. Exploring offshore resources while protecting inshore fisheries, understanding fishing communities, promoting recreational fisheries, enforcing patrolling, etc. can all go a long way in helping island fisheries thrive.

Vardhan Patankar is a marine biologist working on a range of basic and applied studies in marine systems in the Andaman islands.