The Road to Fixing Air Pollution in Delhi, Beyond Odd-even

What makes matters worse in Delhi are the incessant tide of migrants, misaligned institutional structures (unwisely split between the Centre and the quasi-state of Delhi), and BJP’s ongoing vendetta against AAP. 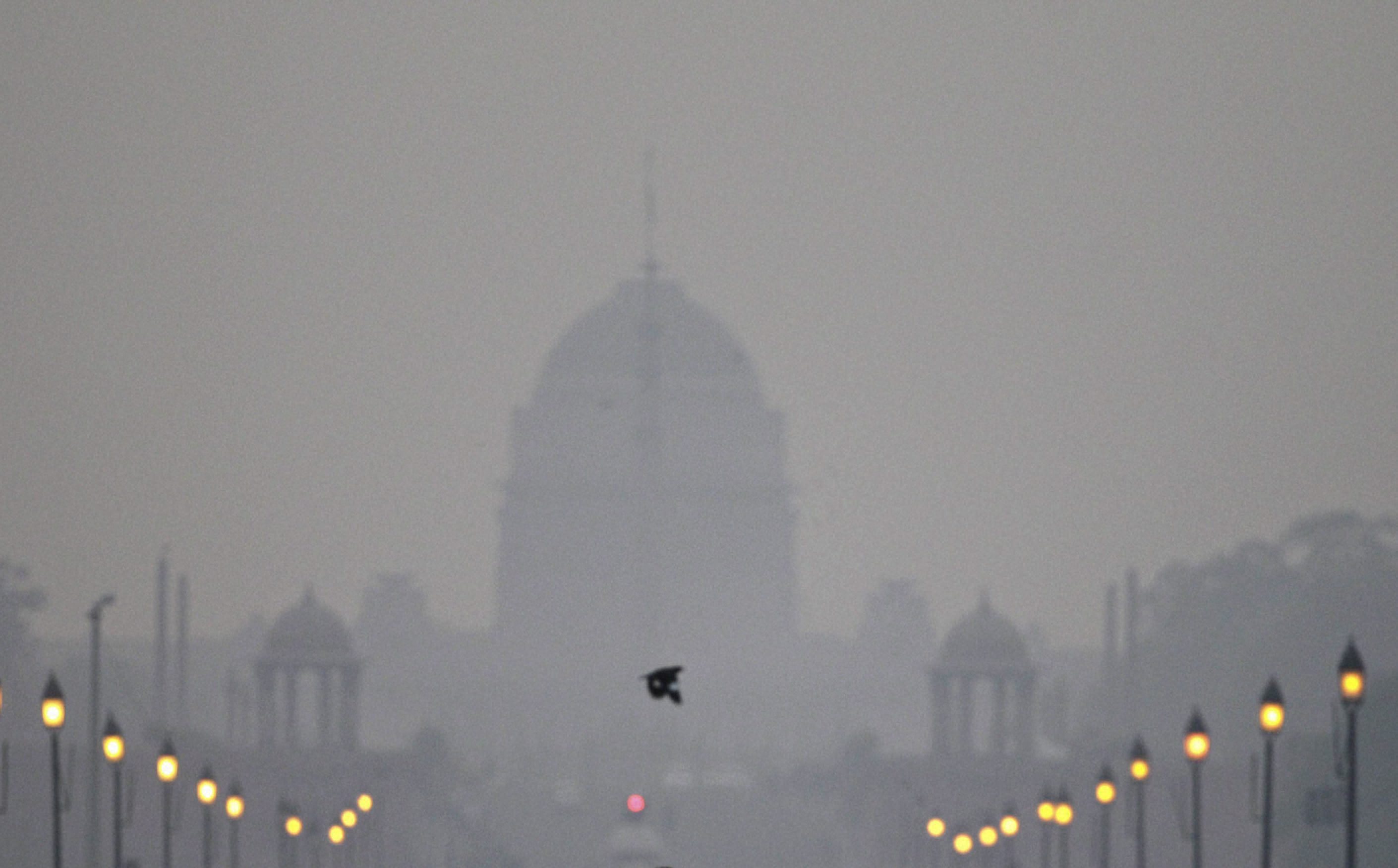 A view of Rashtrapati Bhavan enveloped in a blanket of smog, caused by a mixture of pollution and fog, in New Delhi in November 2012. Credit: PTI

An unprecedented public health crisis has been unfolding in Delhi: 40% of our kids now fail lung capacity tests. Respiratory emergencies have tripled in the last seven years, with no relief in sight. Just breathing our air, full of toxic gases and particulates, has raised the incidence of strokes, heart disease, cancers, birth defects, pneumonia, and more. In Delhi alone, an estimated 80 people are dying daily from conditions provoked by air pollution. Much like smoking cigarettes, it’s shaving years off our lives.

Though some fare worse than others, none are immune: rich or poor, young or old. A high burden of disease erodes quality of life, family finances, and the economy. What will be the cost of this health crisis, in human lives, in healthcare, in lost productivity?

It’s a good thing the AAP government plans to build a thousand Mohalla clinics, because what’s unfolding is far bigger than last year’s dengue scare in Delhi. Though experts have long known these health effects of air pollution, years of apathy, ignorance, and denial—among both citizens and politicians—have led us here. So how serious are the Aam Aadmi Party (AAP) and Bharatiya Janata Party (BJP) governments about fixing this menace? How well do they understand the gravity of the situation?

Odd-even was a success but…

The AAP government, under pressure from the courts, announced several anti-pollution measures last December. Among these was the bold odd-even experiment, an emergency measure designed to temporarily reduce pollution. Going just by the 30 percent drop in fuel sales, there’s no doubt that the measure cut pollution. But its larger success lay in creating awareness of the problem, because awareness is a precursor for change. Odd-even also reduced congestion and commute times, and pushed many to discover car pooling and public transport. Compliance was high, proving that Delhiites can rise to the occasion in a show of civic sense that many thought impossible. Many who were skeptical are now praising the scheme. Some even want it back.

The AAP government wants to bring back odd-even this summer, when pollution levels are well below half that in winter. They are even consulting the people of Delhi on when, and for how long, to implement it. But this approach makes little sense for a decision that elsewhere in the world is rightly guided by pollution levels, not opinion polls. Odd-even is an emergency measure; it should be deployed only on the worst days of pollution as part of a larger emergency response that also shuts schools, certain industries, etc. If AAP’s primary intention here is to further raise public awareness of pollution, they should instead mobilise the sluggish bureaucracy they have inherited to work on other measures this summer – measures that will involve the public as well as bring about a lasting reduction in the sources of pollution.

Our major sources of pollution

Understanding the sources of our pollution is an essential first step for evidence-based action. However, a precise apportioning of pollution from each source remains an intractable challenge. That’s because pollution in Delhi, more than in first-world cities, depends on a highly diverse and shifting set of factors both in and outside Delhi. These include varied fuel types used by vehicles, businesses, and households; burning of crop residue and other biomass; waste burning; dust from exposed soil surfaces; construction practices; industries and power plants; traffic congestion; power outages and diesel generator sets (gensets); weather and season; the socioeconomics of a neighbourhood; and more.

Several scientific studies do exist to describe how much of our pollution comes from which source, but they arrive at different results owing to different assumptions, methodologies, and ideologies. No single study can be said to get it all “right”, including the much talked about recent study by IIT Kanpur (which remains mysteriously hidden; why isn’t it public yet?). The researcher must rely upon surveys to estimate how much of the diesel emissions in our air come from vehicles v. gensets v. mobile towers; how much of the biomass emissions come from cooking vs. waste burning vs. crop residue; how much of coal emissions come from brick kilns vs. industries vs. power plants; and so on. The truth is that source apportionment studies use the language of physical science but, given their hydra-headed object of study, inevitably differ in their findings. Interested parties then gravitate towards and promote the studies that confirm their biases and preconceptions.

Instead of obsessing over precision of source apportionment in a single study, which is a mirage, it’s more useful to consider all studies together in determining the top sources of pollution. Doing so reveals the following as the top three (especially when factoring in what people actually breathe, as opposed to the ambient pollution measured by air monitors): (1) Vehicular emissions, with a focus on diesel; (2) Burning of coal, wood, kerosene, waste, crop residue, and other biomass; (3) Dust from roads, exposed soil, and construction sites.

What should our governments do?

Delhi should learn from other cities around the world. Take the case of Mexico City, similar to Delhi in terms of demographics, geography, and the curse of wintertime inversion. In 1992, when Mexico City was declared the most polluted city in the world, it initiated a series of measures that led to much cleaner air within a decade. If they can do it, so can we! The work required is not mysterious and is, in fact, laid out for us. It’s much cheaper to reduce pollution than to deal with its human toll. Every bit of reduction is worth fighting for.

Below are the top seven areas in which our state and central governments must act collaboratively, with both local and regional initiatives. These initiatives will not only reduce pollution but will also go a long way in turning Delhi into the “world class city” that AAP promised.

What, then, are the obstacles to progress? Delhi has more financial resources than other metros and lots of expertise in its elite institutions. But Delhi, too, if perhaps less than its neighbours, displays the Indian State’s notoriously weak ability to implement policies and services on the ground. The best laid plans often fizzle out due to a culture that mixes apathy, absenteeism, corruption, and incompetence – a wider cultural problem. What makes matters worse in Delhi are the incessant tide of migrants, misaligned institutional structures (unwisely split between the Centre and the quasi-state of Delhi), and the BJP’s ongoing vendetta against the AAP.

Citizens certainly need to do their part to help reduce air pollution through their daily actions. Our lack of civic sense and responsibility is legendary, and it needs to be raised via concerted public service messages and school education, as well as well-designed incentives and penalties. But that won’t be enough. What will it take to get our state and central governments to also tackle the big ticket items like emission standards, public transport, waste management, biomass burning, and dust reduction?

As with the switch to CNG 15 years ago, much of the recent activism on air pollution has emerged from our courts. Behind this lies the sad reality of disempowered pollution control boards, unmotivated bureaucracies, and politicians unwilling to prioritise measures unless they seem electorally important. But while Public Interest Litigation may be a useful tactic, it’s neither enough, nor a sustainable strategy. In a democracy, there’s no substitute for a critical mass of informed citizens. Clean air will not become the government’s priority unless citizens make it their priority. Citizen and media pressure is central to this change. We need to mobilise and have our voices heard through various citizen-led initiatives, such as “Help Delhi Breathe”. Let’s rise, agitate, and reclaim our right to clean air.

Namit Arora is a member of the Delhi Dialogue Commission, an advisory body to the Government of NCT of Delhi. Most recently, he led the drafting of Delhi’s Solar Energy Policy and is now working on the problem of air pollution.