Our progress in conserving natural heritage, environmental stability and ecosystem services is measured solely through the lens of tree cover. It shouldn't. 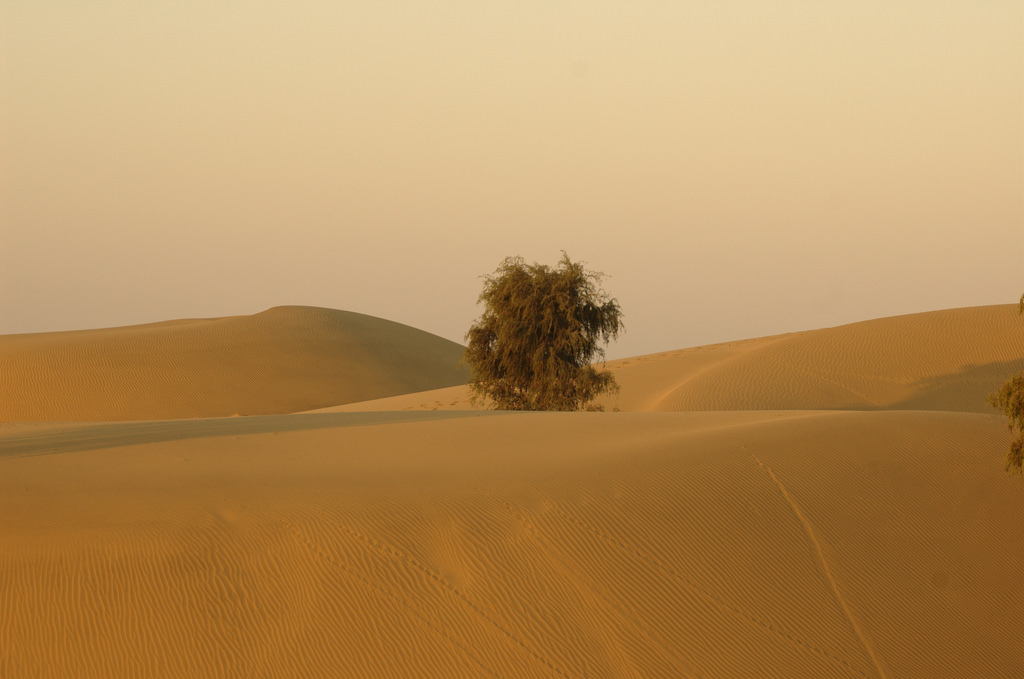 Grasslands and deserts have long been mistaken as the ‘unnatural’ product of anthropogenic degradation of forests. Credit: honzasoukup/Flickr, CC BY 2.0

India’s non-forest ecosystems are biting the dust in the absence of a holistic conservation policy. In place of the latter, we have a new National Forest Policy that outlines the use of forests in legally binding terms.

First drafted by the British to maximise timber production, this policy was revised three decades later, in 1988, to put conservation before commerce. While the revised policy aimed to safeguard environmental stability, natural heritage and ecosystem services, it focused entirely on forests. Forests are spaces dominated by trees that are rich in plants and animals, provide ecosystem services such as clean air, water, fuelwood and fodder, and have economic values in terms of tourism and timber.

However, our natural heritage extends beyond forests and includes deserts, grasslands and aquatic ecosystems that are just as important for biodiversity, ecosystem services and economic values. Yet these ecosystems were excluded from the only conservation policy we had because they were not forests.

Today, we have an opportunity to rectify this mistake as our policymakers revise the National Forest Policy in light of emergent issues in forest use and conservation.

The Ministry of Environment, Forests and Climate Change uploaded an online draft of the policy for civil societies to comment. In its current form, the policy reiterates its past mistakes, as grasslands and deserts are not considered in it. Instead, they receive a management prescription that will imperil their ecologies.

The draft prescribes that “Adequate measures will be taken to increase rapidly the forest cover on … semi-arid, and desert tracts” and that “afforestation programs under Compensatory Afforestation Fund will be carried out in semi-arid and desert”.

Afforestation means creating a forest from scratch by planting trees in areas such as grasslands and deserts. Why would that be problematic? The environmental benefits of trees are common knowledge, and planting them is a noble service. However, studies have shown that the ecological benevolence of trees is not universal.

Ecosystems such as grasslands and deserts have been naturally devoid of trees since prehistoric times. Their treelessness has facilitated unique adaptions among species that are incompatible with forests.

For example, the critically endangered great Indian bustard, a large and upright grassland bird, is ever watchful of its surroundings to avoid predation. It lacks a hind toe, which helps other birds to perch on trees, and spends its life on the ground. Similarly, the chinkara, a springy desert antelope, can outrun its predator in open foraging grounds.

The bustard, chinkara and many fellow non-forest animals can’t tolerate the impaired visibility and compromised movement that come with an excess of trees. When grasslands and deserts are turned into woods, as has been done on many occasions, these animals abandon their homes for open pastures. Why then should growing forests where grasslands and deserts have prevailed since antiquity be our policy?

Among the justifications that have resurfaced, few deserve mention. Grasslands and deserts have long been mistaken as the ‘unnatural’ product of anthropogenic degradation of forests. Current scientific understanding, however, discards this myth, certifying India’s grasslands and deserts as ‘natural’ ecological entities that have been around since before the first humans in the region.

Second, we have missed the woods for the trees. Our progress in conserving natural heritage, environmental stability and ecosystem services is measured solely through the lens of tree cover. As a result, the indicator has replaced the motive even as management focuses on increasing or maintaining tree cover without reflecting on whether these efforts address local conservation issues.

In a case of double jeopardy, grasslands and deserts are sacrificed to grow forest as compensation for diverting forest lands to industrial projects under the compensatory afforestation scheme. Afforestation programs have resulted in dense thickets of an exotic, invasive tree called Prosopis juliflora in the erstwhile grassland reserves of Shokaliya in Rajasthan, where another endangered bustard, the lesser florican, breeds.

Despite their proven ecological hazards, these plantations are maintained for fear of losing tree cover that may reflect poorly on the state’s conservation efforts. Moreover, tree plantations in grasslands and deserts have been touted for their fuelwood and fodder benefits. However, there are alternatives to achieving this objective that suit local ecologies, such as plantation of native grasses to offset fodder requirement of livestock.

It is time we acknowledged grasslands and deserts as natural conservable ecosystems, and develop a national policy to outline their ownership and use – one that safeguards their ecological characters rather than modifying them by planting trees.

Sutirtha Dutta is a conservation biologist and faculty member at the Wildlife Institute of India, an autonomous research and conservation institution of the Government of India.