The IMD has now withdrawn the red alert from the city. New Delhi: Intense showers battered Chennai and other northern regions of Tamil Nadu on Thursday while the depression over Bay of Bengal crossed coast by evening near here.

As many as 14 people were killed in rain related incidents in the state, standing crops were submerged, trees uprooted and over a 1,000 tenements, mostly huts suffered damage across Tamil Nadu.

The heavy rains and release of surplus from dams, a total of about 13,000 cusecs of water, transformed several areas in Chennai and other northern regions of Tamil Nadu into a virtual, large water body as streets swirled with deluge and trash.

The flooding witnessed for the past four days threw normal life out of gear as closed, inundated subways and traffic diversions gave people a harrowing time.

With the passage of the depression on Thursday evening, there was a let up in rains in most northern Tamil Nadu regions and people could be seen visiting local markets to buy essentials after confining themselves to their homes for most part of the day.

The IMD has now withdrawn the red alert from the city, The News Minute reported, but heavy rains may continue in some parts of the city.

Till date in the ongoing monsoon season, 157 head of cattle have died, 1,146 huts and 237 houses have been affected in rain related incidents across the state.

In view of water-logging, suburban train services saw suspensions and delay. The services, however, resumed later.

In respect of flights, though departures continued suspended arrivals resumed as the depression faded. Chennai Corporation authorities distributed a total of over 6 lakh food packets to people in affected areas.

Chennai and several other northern regions witnessed heavy rains since Wednesday night and the depression moved close towards the city today, with showers intensifying in several areas.

“Your selfless services and sacrifice have removed the distress of crores of people,” the CM tweeted.

The heavy rainfall covered almost the entire city under sheets of water including the downtown Mylapore and heavily inundated several parts of neighbourhoods including Velachery and rain water entered state-run hospitals in KK Nagar and Chromepet prompting authorities to shift patients to other facilities.

Fearing damage, several residents of deluge-hit Ram Nagar in Madipakkam parked their cars on the nearby Velachery flyover’s margin or underneath similar facilities nearby.

The bylanes of Pudupet, near the swollen Cooum River, Choolai, Semmancherry, Kodambambakkam, KK Nagar-MGR Nagar and Arumbakkam were among the innumerable neighbourhoods hit by the deluge.

The streets around Hasthinapuram, close to suburban Chrompet resembled an angry speeding river, with water level raising over three-feet.

Inundation in several places like the Five Furlong Road in Guindy-Velachary point was about three feet or a little over it.

The inundation hit neighbouhoods like those off Mudichur, Perungalathur and Nandivaram-Guduvancherry appeared like mini islands with little access to essential needs and power supply was disconnected in all such areas considering safety. 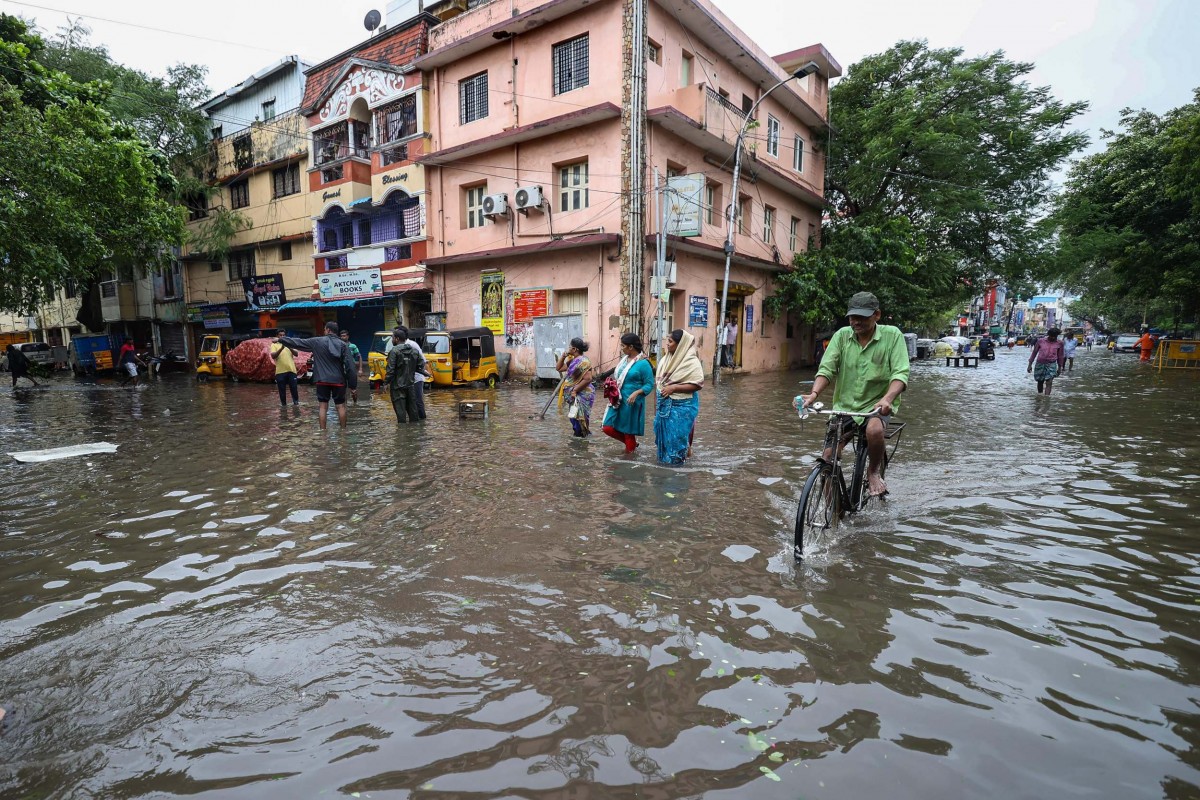 A woman who was riding a scooter on the road abutting Raj Bhavan was injured when a tree fell. She was rushed to a hospital by authorities and the fallen tree was removed.

Besides Chennai and its suburbs which fall under the districts of Chengelpet, Tiruvallur and Kancheepuram, other regions of the state including the northern belt too received heavy rainfall.

Stalin also ordered constituting a six-member ministerial panel, headed by cooperatives minister I. Periyasamy, to assess crop damage, especially in the Cauvery delta region, and submit a report to the government to expedite relief work, an official release said.

The rains began on November 6 night in TN and there was a let-up in many areas for a day.