Tadoba: The Story of a Park Under Siege

The famed tiger reserve is being boxed in by a rectangle of projects that will essentially isolate the landscape. 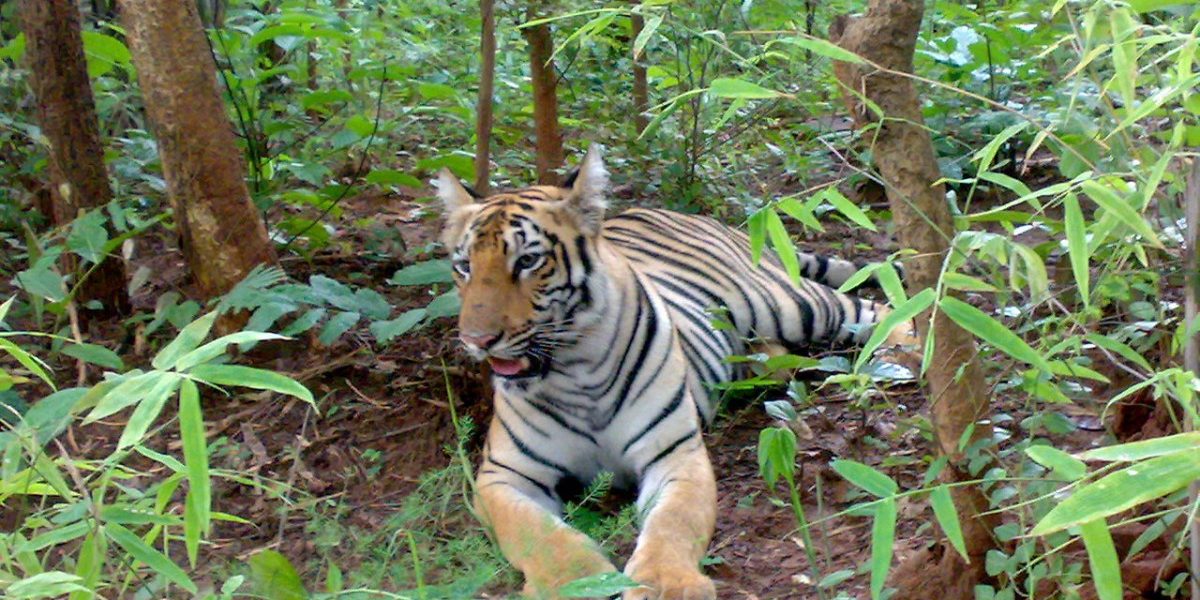 A tiger in the Tadoba reserve. Photo: Sushil ghugul/Wikimedia

The Tadoba Andhari Tiger Reserve in Chandrapur, Maharashtra, evokes a thousand stories of India’s famed wildlife. Having become a critical tiger habitat in 1993, these rugged central Indian forests have achieved international fame as the capital of wildlife sightings.

With much of the local economy increasingly dependent upon tourism, the effect is visible on all aspects of life in Tadoba. And with it has come a lot of good and some bad things too.

Most families in the area have at least one member working in the resorts and homestays garlanding the park, which have become a crucial source of income. As a result, the seasonal emigration of its population – due to agricultural failures – has plummeted. The local people even collect less firewood than before thanks to schemes like the recently launched Shyama Prasad Mukherjee Jan Van Yojana, which attempts to provide alternative livelihoods, solar fencing for croplands and LPG connections to families living in border villages.

As things have changed, the people have also become more aware of their responsibility to protect the forest.

On the flip side, the local culture and lifestyle is being steadily eroded by uncontrolled tourism. One local researcher said that Moharli, a nearby village, resembles an oversized festival at night, with few reservations about maintaining its culture. Waste management hasn’t been a priority; Moharli stinks of garbage. Homestay options have proliferated without any kind of architectural or functional planning. Most waste ends up stagnating just outside the view of the rich tourist.

In fact, most of all, tourism has magnified the importance of the cash economy. Guides, shopkeepers and local homestays only seem to want to earn as much as possible, unmindful of the forest’s prescribed rules and the rules of keeping ecotourism sustainable. Currently, tourism in Tadoba is the proverbial double-edged sword.

There are other problems as well, possibly bigger ones. Roads rank high on this list of woes. The government has been planning road-widening and greenfield projects on an almost daily basis.

A look at the map shows that the reserve is being boxed in by a rectangle of projects that will essentially isolate the landscape. As a result, the projects on the Naghbid-Mul, the Hinganghat-Mul and the Chandrapur-Allapalli sections will effectively do what years of poaching and deforestation have failed to: they will cut all the corridors and leave the inmates of Tadoba to serve out the rest of their time in a giant zoo.

Another government intervention, coal mining, apparently considered to be absolutely necessary for the country’s growth, has only exacerbated the crisis, although it has run into resistance from activists. Coal mines in the area have irrevocably damaged corridors that previously connected the local population to nearby forests.

One activist went so far as to say that the tigers of Tadoba could be the first in the country that could suffer from asthma as a result of pollution.

Also read: Snakebites, Anti-venom and a Country that Lets the Problem Slither Away

Curiously, adequate protection from the forest department has allowed a healthy tiger population to developed in Tadoba, which in turn means some of these animals could spill over into nearby adjoining forests and farmlands. So as more areas are cut off by mines and roads, the tigers will to travel farther and wider in search of prey, which in turn will likely lead to more conflicts.

With many tigers already living outside core habitats in India’s central states, these statistics could see a spike in the future, possibly leading to even more revenge killings of wild animals.

So it is that the great forests of Tadoba – named after the tribal god Tadu, who fought against a tiger – are currently fighting another battle: of their own survival. As each day passes and the threats loom larger, it becomes imperative that the trees themselves are strong enough to survive, and persist as the tiger capital of India. And the situation is that much more precarious for it.