Ground Report | 'People of Sunderbans Didn't Die in Cyclone Yaas, They Might Die of Poverty'

While hundreds of houses are still under water, the storms triggered by the cyclone have inundated ponds and farmlands with saline water, possibly making the land uncultivable for years. 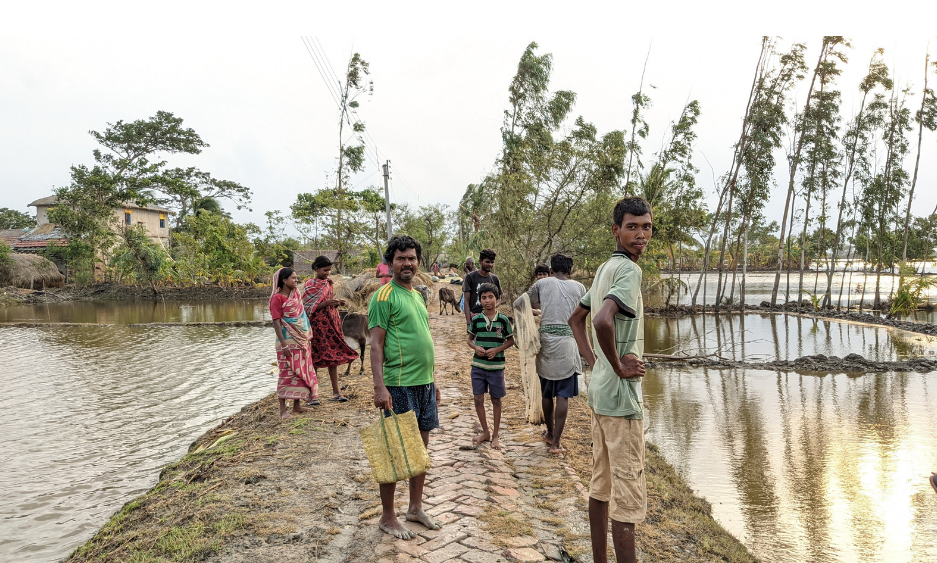 “People didn’t die this time in the cyclone, but they might die of poverty. We lost all our means of livelihood. How can we survive this way?” said Gourhari Manna of Sridharnagar of L-Plot, one of the islands in Sundarban located at the lap of Bay of Bengal.

“They won’t let us live. Amphan last year damaged everything, and within a year Yaas came to damage us even more,” he said.

The Sundarbans delta is located around 100 kilometres from Kolkata. To get there from the state capital, it takes at least four hours by car and then boat. The Wire visited the Patharpratima block on Sunday. This block was one of the worst affected of the Sundarbans islands during the course of cyclone Yaas last week.

Days before the cyclone hit the island, the government evacuated over 1,000 families of Sridharnagar gram panchayat in Patharpratima block. When The Wire visited the island, some families said they had gone back to their homes only to return to the flood centres at night because of high tides.

Five days after the landfall of the cyclone, hundreds of houses are still under water. The base of many houses got washed away as the remaining structure stands on bamboo. Poritosh Jana, 53, lost four bighas (21,404 square metres) of farmland, which he shared with his younger brother. Jana is now living with his family in the local school, which is being used as a shelter house.

“Every year this happens. God doesn’t want us to live. Our farmland is completely destroyed because of saline water. Anyway there is hardly any income because of COVID-19 lockdown. Now, there will be no income,” said Jana. 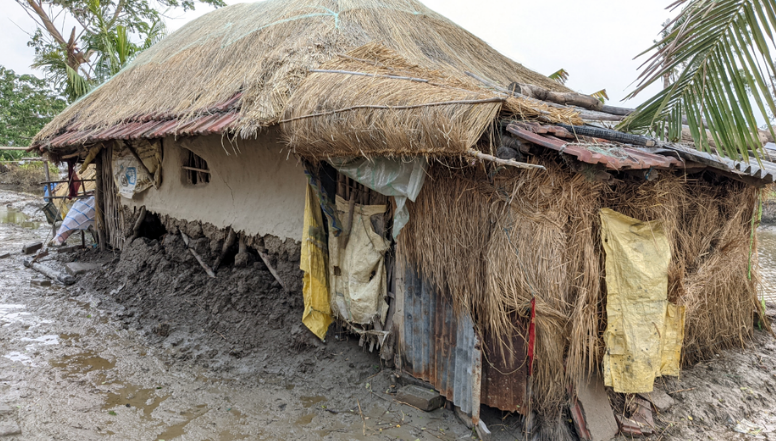 The base of a house got washed away in the flood caused by a high level storm surge in Kuemuri village under the Herambagopalpur gram panchayat. Photo: Himadri Ghosh

While cyclones are a regular occurrence in the Bay of Bengal, they are becoming more frequent and intense, making the life of islanders more vulnerable. A year ago, super cyclone Amphan wreaked havoc in Bengal, Sundarbans, parts of North 24 Parganas and Kolkata. Even before these islanders could rebuild their lives from the previous one, cyclone Yaas hit them again.

We took a short boat ride to Banashyam Nagar gram panchayat, another island under the Patharpratima block. This island is one of the most affected areas of this administrative block. Around 14,000 bighas (37,45,850 square metres) of land was under water. Over 3,000 feet of river embankments were breached in four villages which comprise the gram panchayat.

Krishna Pramanik, 41, a resident of Gangapur village said, “River embankments started breaking in different places. And in no time salt water flooded our house and land. Water level rose to over 16-17 feet. Our house is completely damaged. Our farmland is gone because of salt water. What will we do now? How long can we live like this?”

Baikunthapur Tarun Sangha (BTS), a local NGO working in the riverine areas of Sundarbans, is running a community kitchen in Gangapur village.

Pramanik said the NGO has been providing them with food for the past three days. “They give food during the afternoon, some of which we save for the night. Panchayat people are providing water.”

“People are affected very badly this time. Although the immediate impact is similar to any cyclone that hit Sundarbans previously, the long time impact is severe this time. This cyclone snatched their livelihood,” said Susanta Giri, secretary of the NGO.

A community kitchen organised by a local NGO is providing food to the people of Gangapur village under Banashyamnagar gram panchayat. Photo: Himadri Ghosh

Over 80 families are living on the embankments which separate the village from Jagaddal river. The area is known as Aila Badh. Shyamal Bera, who is living with his family of five in a makeshift tent, said, “We have nowhere to go. Our house is under water. We are staying on this embankment because it is at such a height that water won’t come to this level. All families here are making food together with whatever we are left with.”

Pramanik’s neighbour Basudeb Mondal owns two bighas (535 square metres) of farmland on which he grows paddy, and one mid-size pond which now looks like it’s a part of the river. Mondal said, “Cyclone, coronavirus, lockdown and again cyclone, tell me how will poor people like us survive? Our lands were destroyed. All fish are dead. What will we eat? Relief will come for 15 days, one month. What will happen after that?” said Mondal.

Speaking to The Wire, a local school teacher, Satyaranjan Bauri of Sridharnagar Sailendra Bidyapith said, “In my lifetime, I have never seen this rise in the water level. Lands located more than five to six kilometres away from the river are underwater. Saltwater has inundated all the farmland in the village which is our biggest concern. We can’t farm on this land. People had ducks, hens, and everything is gone now. Fishes are lying dead in ponds. Means of livelihood are destroyed. Villagers will suffer for the longest time.”

Kamal Kanti Sen, former co-ordinator of tropical soil biology and fertility management at Jawaharlal Nehru University and a noted expert on the Sundarbans, told The Wire, “After Alia, life paused on the island. I fear a similar situation this time, or even worse. A major humanitarian crisis is in the offing; hectares of land will remain uncultivated for the next few years.”

Cyclone Yaas may not be as powerful as cyclone Amphan in terms of destruction. There were not many dramatic photographs like blown roofs or wrecked houses like in 2020. But the less visibly alluring, saline water inundation of ponds and large stretches of farmland in the Sundarbans is much more devastating for the islanders and has severe long-term effects.

Also read: A Healthy Environment as a Human Right

Another short boat ride from Banashyam Nagar took us to Birat ferry ghat in Achintanagar. Around 12 km north, we reached Kuemuri village under the Herambagopalpur gram panchayat, another severely affected area due to the storm surge triggered by the cyclone.

We were welcomed by the stinking smell of dead fish, floating on inundated ponds and farmlands. As we went forward, we saw villages under water. The colour of stagnant water also changed from green to dark brown.

Dinanath Pike’s mud house washed away on May 26 afternoon, since then, he and his family took shelter in a nearby school. Pike had around 1.5 bigha (401 square metres) of farmland and a small pond, which are now underwater.

“My house was damaged last year. To repair the house, I took a loan of Rs 25,000 from mahajan (loan shark) and used Rs 10,000 that the government gave. Even before I could pay back the amount, the house was damaged again. Tell me what is the point of living a life like this? We will have to live this way until we die. I wish we better die than living like this,” said Pike, breaking down. 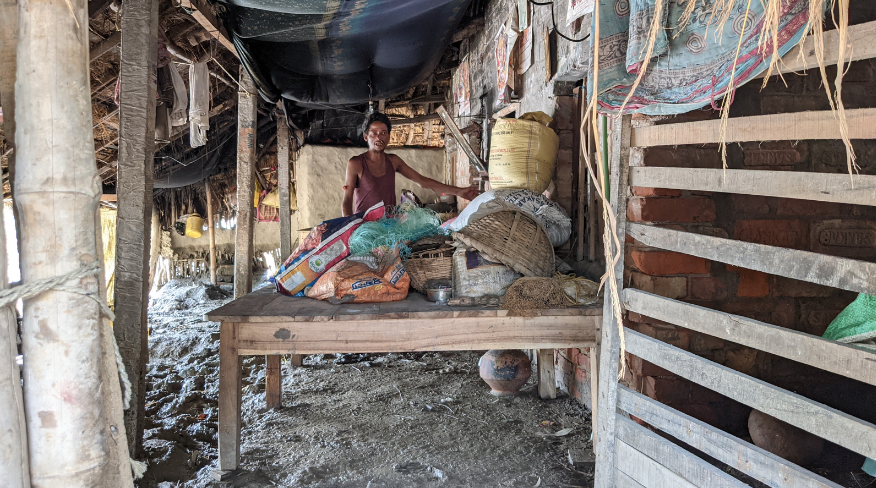 House of 45-year-old Dinanath Pike was destroyed by cyclone Yaas, and since then, he and his family took shelter in a nearby school. Photo: Himadri Ghosh

Lands as far as seven kilometres inside of Nagchara river, a branch of Thakuran river, were flooded. A stretch of the road from Kuemuri Bazar to Bharatjanani Mor was completely under water and looked like one vast lake.

Shukumar Hati, vice-president of Herambagopalpur gram panchayat said, “There are four villages under this panchayat, and all four are under water now. People here won’t be able to farm in the coming years. Fish, hen, duck – all are dead. People don’t have any source of income now. Livelihood of people is the casualty.”

Hati explained that last year after October, there was no rain in Sunderbans, which is why most villagers could farm during the winter. “Paddy, which was sown in the later half of the year, didn’t yield as there was no rain. Farmers’ income was badly hit,” Hati said.

Santosh Mallick, 55, has a large pond of five bighas (1,337 square metres) which is currently under water, and all the fish which he cultivated for the past four months are dead. Mallick considers himself lucky as he has a pucca house with a concrete roof. Three of his neighbours took shelter in his house. “I had invested close to Rs 5 lakh on fishing. Now everything is gone. See, all the dead are floating,” Mallick said, as he pointed toward his pond.

A flood relief centre near Bharatjanani Mor is nearly full. When asked about COVID-19, Khokon Maity, another islander who’s taking shelter at the relief centre, said, “We don’t fear the coronavirus anymore. Before coronavirus can do anything, cyclones and hunger will kill us.” Maity confirmed that the panchayat has been providing them water and food since the cyclone struck.

Local NGO Purba Chintamonipur Chetana Sangha is supplying drinking water and food to people who lost their houses in the area. Subimal Bera, founding member of the NGO, said they are also conducting surveys to estimate damages caused due to the cyclone and preparing a list of those who need immediate relief.

In Purbo Dwarakapur village of Lakshmi Janardhanpur gram panchayat, we were greeted with the same scenario – smell of dead fish and scores of houses under water. Cyclones and floods have become a part of life for these villagers – the devastation barely shocks them anymore. Their only concern is sustenance. 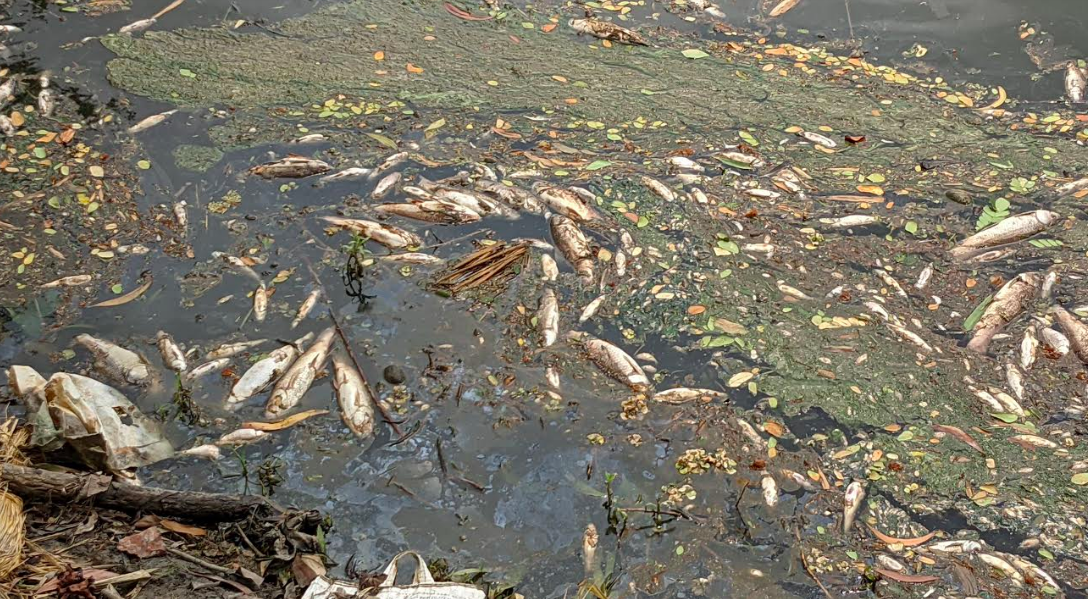 Gouri Mistry, 37, said, “We haven’t gotten any help from the government till now. Some people came and gave me a relief pack (1 kg of flattened rice and two packs of biscuit). This is our fate, we have accepted it. We will somehow survive this. Our concern is how will we survive the whole year, if we can’t farm? How will we survive after all our fishes are gone?”

As there was no rainfall for eight months, the soil cracked in the heat. Now that the land is inundated with saline water, in likelihood it will penetrate beyond the surface. The process of desalination is expensive and laborious.