'Our Sundarban Is Unrecognisable': Life After Cyclone Amphan Wrecked the Island

In addition to the large-scale immediate devastation, the fear is that agriculture in the area will suffer for the next few years. 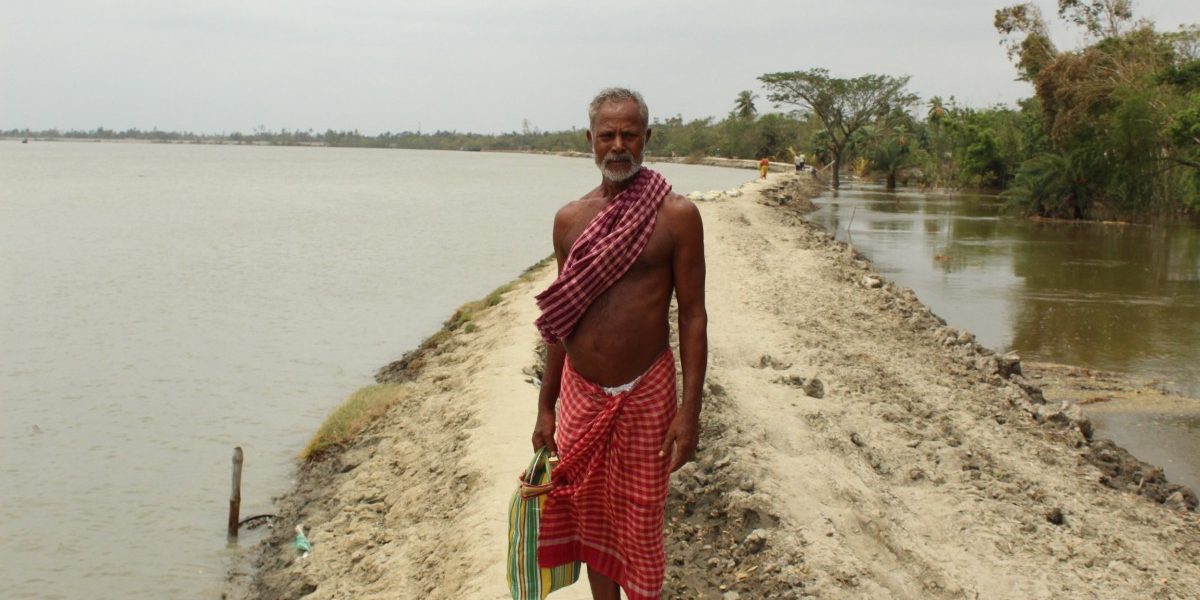 Ananta Mondal lost his house in the flood caused by Cyclone Amphan.

Rangabelia (West Bengal): “I have become a beggar now. All I had was a small hut, God snatched even that from me,” 63-year-old Shabitri Midha of Pakhiralaya village in the Sundarbans said. In the last 30 years, Midha lost nine bighas (60,840 square metres) of ancestral land as the Bidyadhari river engulfed parts of the delta. Pointing to the waters, Midha said, “This river took almost everything we had. Now, this storm has just finished us.”

The Sundarbans delta is located around 100 km from Kolkata. To get there from the state capital, it takes at least four hours by car and then boat. The Wire visited the Gosaba block on Tuesday. This block was one of the worst affected in the Sunderban islands by Cyclone Amphan last week.

“There is no prettiness here to invite the stranger in. Yet, to the world at large, this archipelago is known as the Sundarban, which means the beautiful forest,” Amitav Ghosh had written in his novel The Hungry Tide. Forget prettiness, after Cyclone Amphan, the Sundarbans have become unrecognisable.

Just as we got down from a boat at the Gosaba ferry ghat, we spotted a wrecked launch boat on the right, half of it submerged. It seemed like the launch boat was preparing us for the devastation ahead. 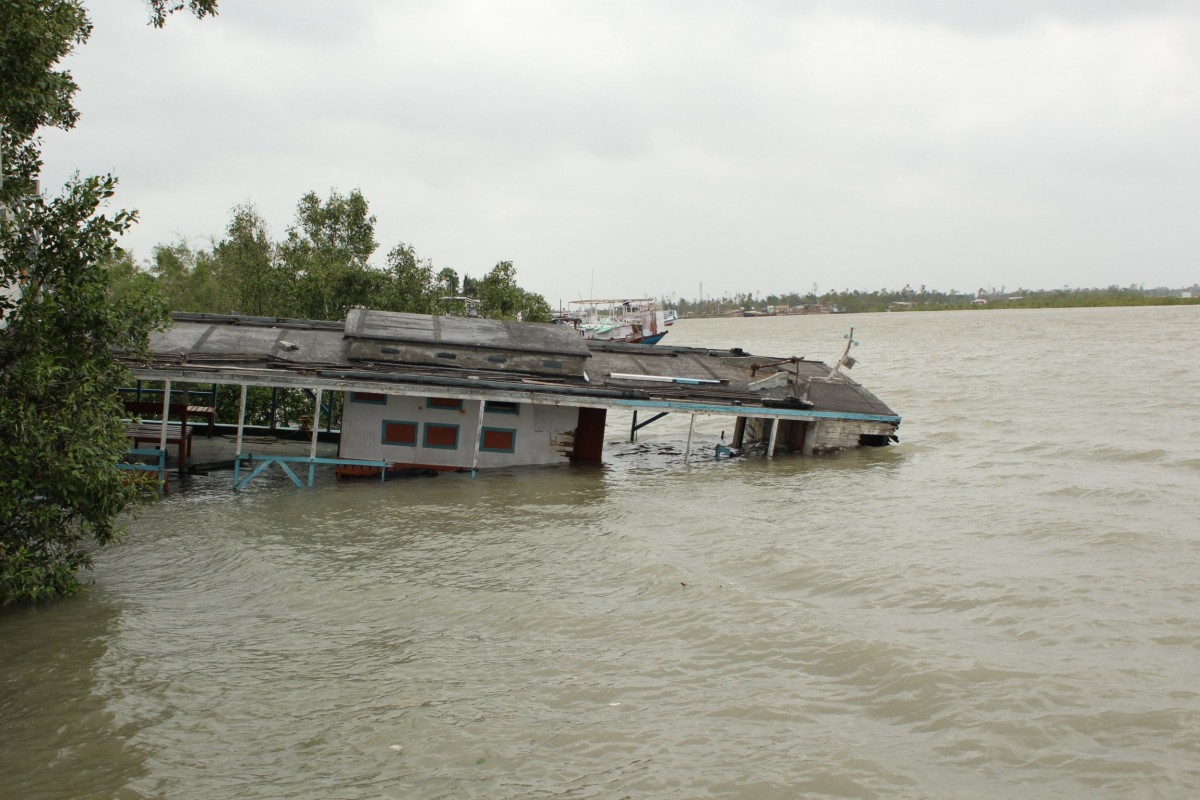 A wrecked launch boat at the Gosaba ferry ghat.

We went towards Rangabelia, about four km from the Gosaba market; we had been told much of the devastation was in this area. On reaching the river bank, just opposite Rangabelia primary school, we found high tides were slowly eating into the remains of the embankment. A group of 20-25 people were carrying tree trunks and sandbags, trying to fix the embankment as quickly as possible

Also read: In Photos: Witnessing Cyclone Amphan, and Damage Like We Never Imagined

Hundreds of houses were wiped out in Rangabelia’s Uttor Para, about one km from the primary school. Ananta Mondal, 67, lost three bighas (20,280 square metres) of farmland and is now living with his family in the local school, which is being used as a shelter house. “I don’t know what we have done, why nature wants to punish us,” Ananta said.

Ananta and his family took shelter in the school on the afternoon of May 20. He is sad, though, that he could not save one of his calves. When asked about the storm, he said, “I have witnessed many storms and floods since I was a child, but never seen such a storm in my life. At one point, I thought we were all going to die.” 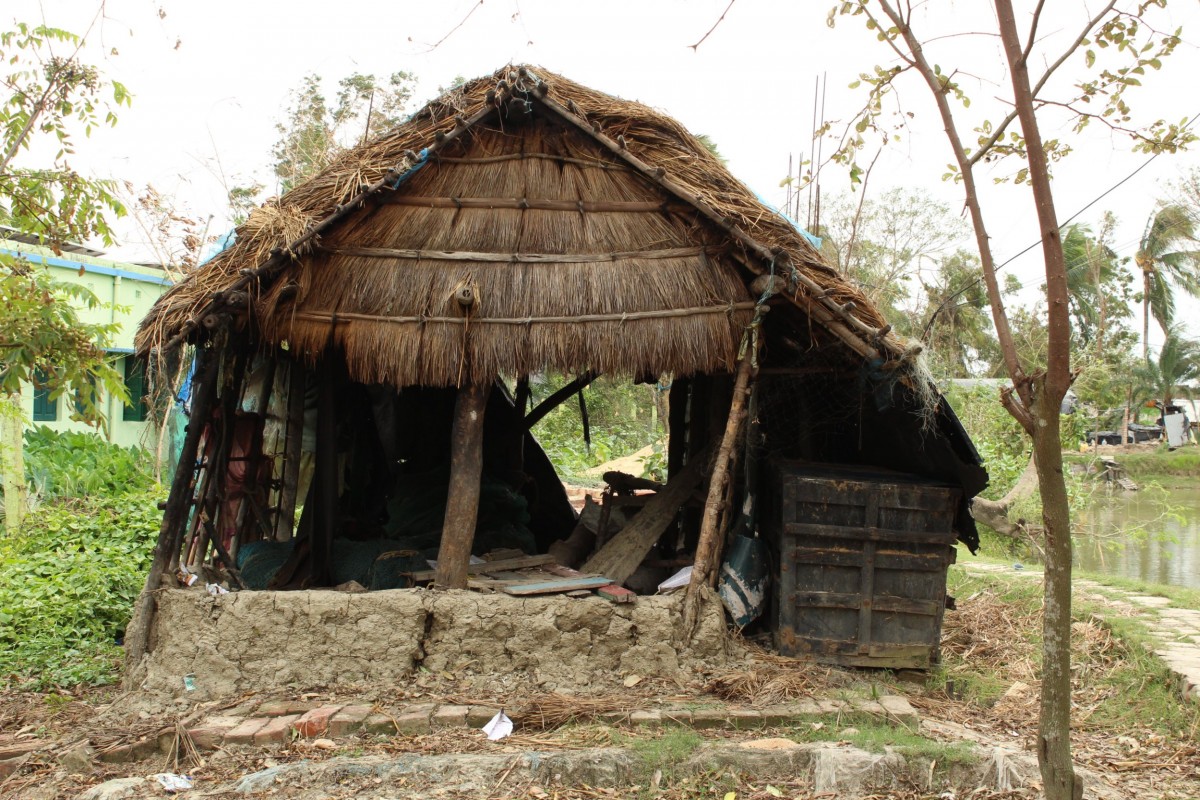 A house whose walls were washed away in Pakhiralaya, Gosaba.

Sukumar Mondal’s wife Rekha Mondal started crying as she showed us their house. Almost fully submerged, only the house’s roof can be seen. Sukumar has around two bighas (13,520 square meters) of land on which he grows paddy and three mid-size ponds, which now looks like they are a part of the river.

Saltwater has inundated all the farmland in the village – creating another big concern for the villagers. “We can’t farm on these lands in the next 2-3 years. Nothing will grow here,” Sukumar said. Cyclones and floods have become a part of life for these villagers – the destruction barely shocks them anymore. “We have now accepted this as our fate. We will have to live this way until we die,” Sukumar said, with a nonchalant expression.

A senior officer at the Gosaba Block Development Office said that the change in direction of Cyclone Amphan, and better preparedness, helped the Gosaba area, or else the destruction would have been far worse. “We have zero casualties in the block. Some of our major embankments were breached and thus, a lot of areas here were flooded. However, considering the intensity of the cyclone, the damages could have been far worse,” he further said.

Cyclone Amphan was the first super cyclone to form in the Bay of Bengal since 1999, and one of the fiercest to hit West Bengal in the last 100 years. 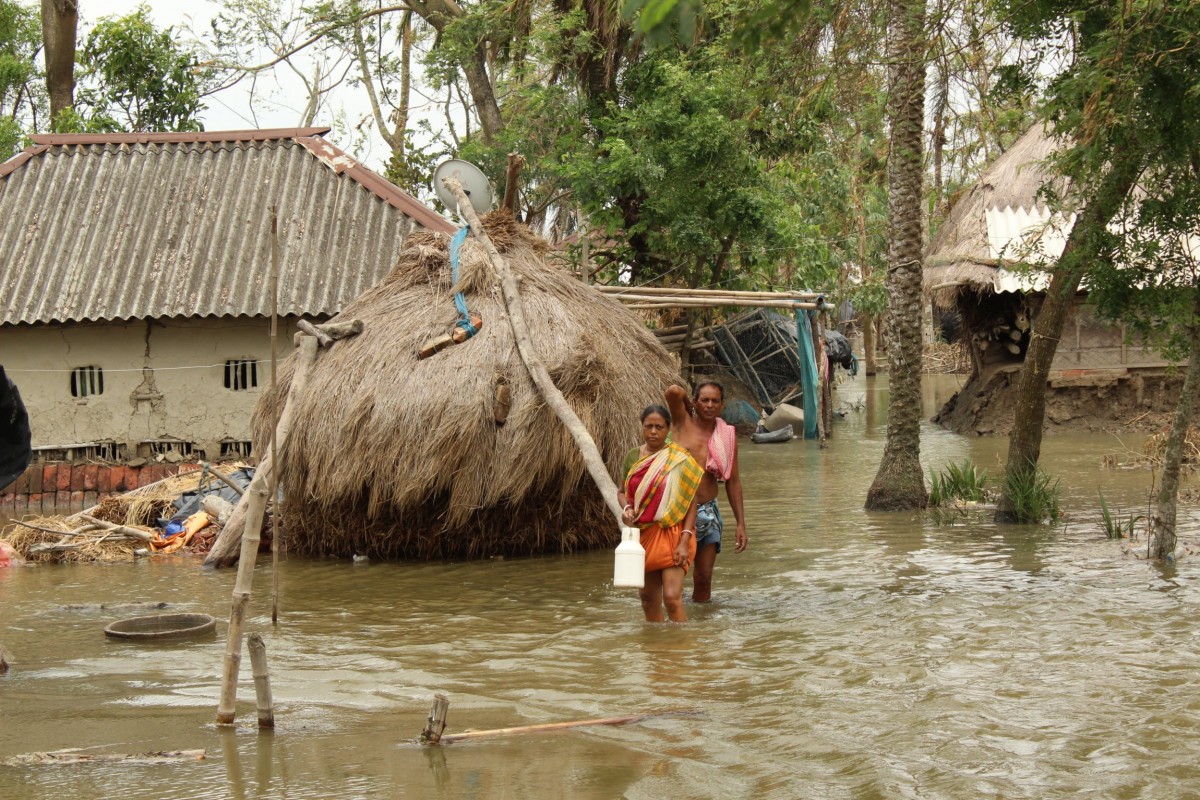 A couple in Rangabelia village went to inspect their damaged house.

As we moved to the interiors of the Rangabelia, the water was still waist-deep; this was six days after the cyclone made its landfall in Bengal’s Ganga Sagar Island. When we reached the Gangamandir area, locals told us that that on the day the cyclone struck and the next, water was flowing 10-12 feet above their farmland.

Rangabelia’s Uttar Para is caught between two rivers –  Bidyadhari on the right and Gormor on the left. This further aggravated the scale of destruction in Rangabelia. A stretch of road from Gangamandir to Jotirampur ghat was completely washed away and looked like one vast lake.

Arjun Dey and Joynal Mistry, who are leading the embankment repair work in Rangabelia, said, “Around four km of road washed away. Currently, we are fixing embankments between Gangamandir and Jotirampur ghat on an emergency basis.”

Also read: Cut Off After Cyclone Amphan, The Sunderbans Losses Are Yet Unknown

Both Arjun and Joynal lost their houses in the cyclone. When asked how, even after their loss, they are working, Joynal said, “If we don’t, who will?” They are working from 4 am to 7-8 pm. They don’t even know how much the panchayat will pay them; they are working to save whatever is left.

Speaking to The Wire, Jayanta Naskar, Trinamool MLA from Gosaba in South 24 Parganas, said around 61,000 houses were destroyed in his assembly constituency alone. “I have never seen a storm like this in my life. Devastation is unimaginable. People here won’t be able to farm in the coming years.”

Next, we moved to Haritala village in Amtali village panchayat, another affected region in the Gosaba block. The images here were the same as Rangabelia, with large areas still submerged and houses completely inundated. 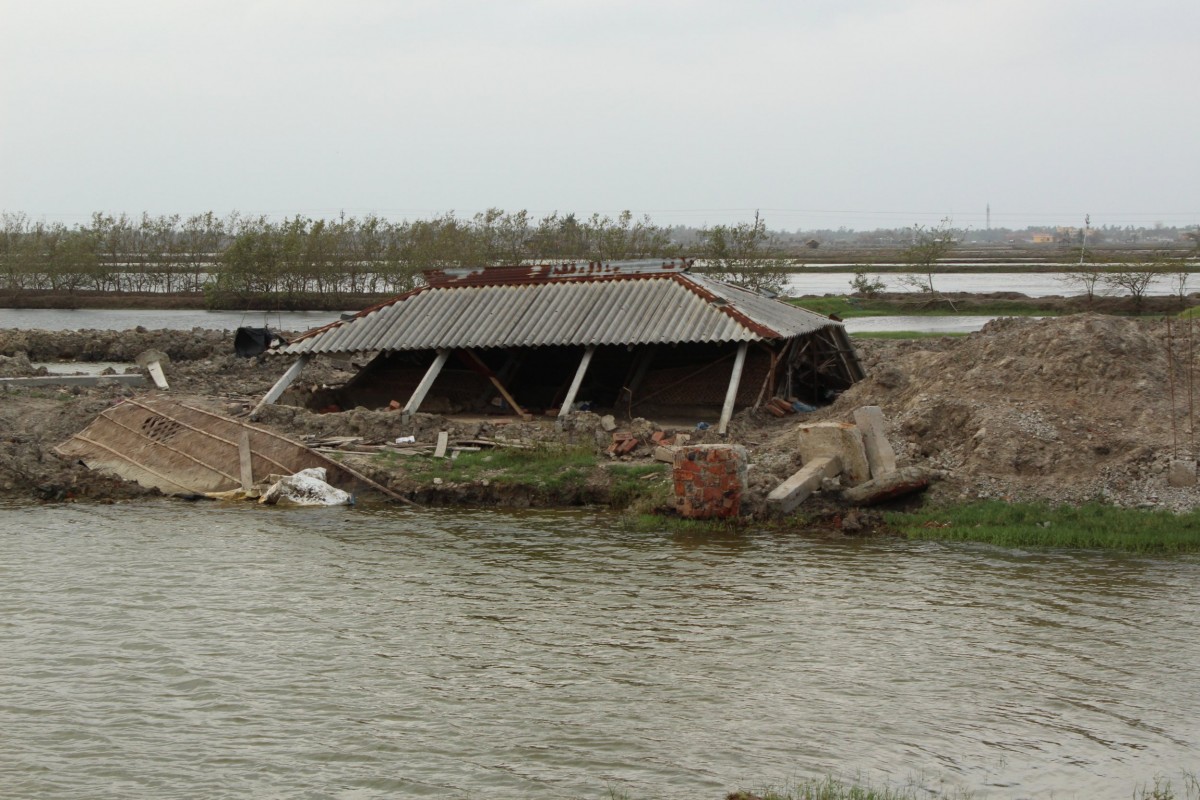 Hundreds of people are now living in Aamtali Binapani School, which was turned into a shelter home. We met 51-year-old Bhim Bhangi, who took khichuri (a broth made out of rice and lentils) in a small aluminium bowl and walked towards his home, which he was trying to fix. When asked about the storm, Bhim said, “Never in our lives have we witnessed such a storm. My house was completely damaged; since this morning my son has been trying to fix it.”

Bhim told us that he had invested all his savings to lease three ponds. “Everything is gone. All I have now is over 300 kg of dead fish,” Bhim said.

Lakhan Dutta was sitting inside a makeshift tent, made of tarpaulin given by the panchayat. Just next to the tent, in a low-lying area, his house was still submerged. Lakhan told us that the first time he got a cooked meal was six days after the cyclone hit Bengal. “We were getting dry food from the camp. Today, for the first time, we got some food.” 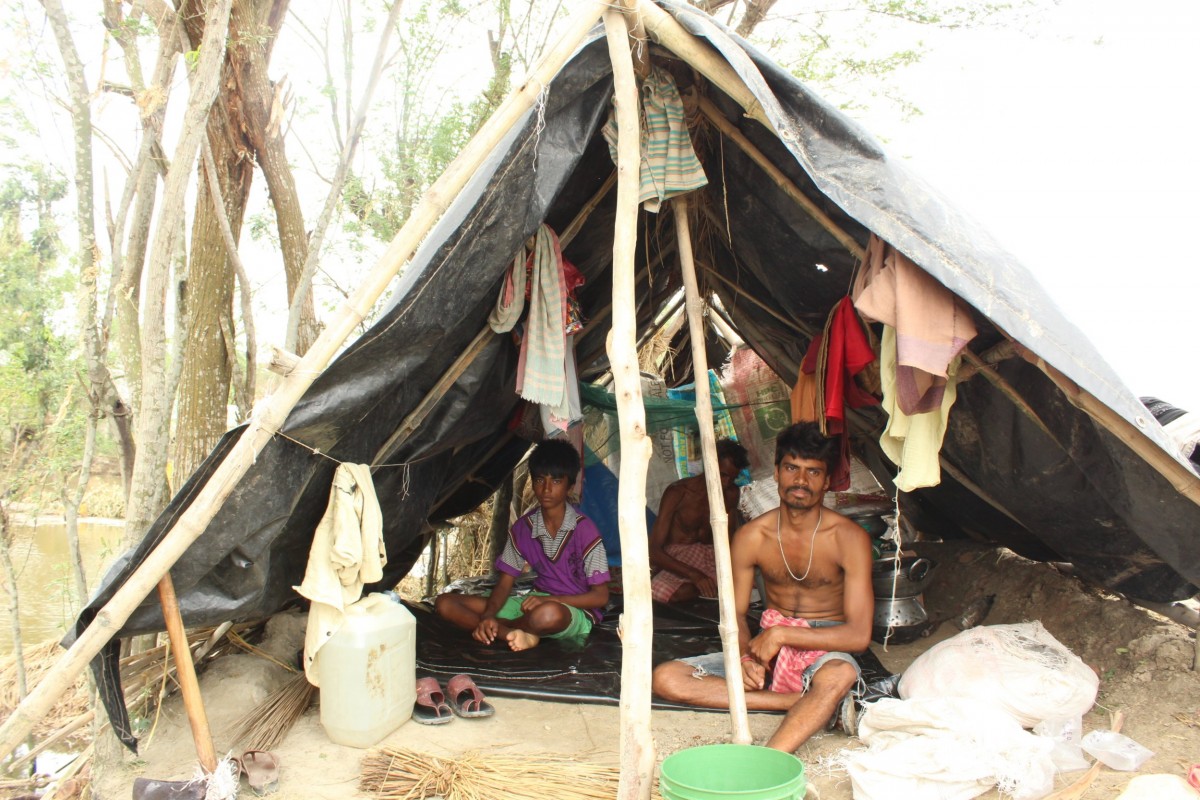 Lakhan Dutta and his family in a makeshift tent using the tarpaulin given by the panchayat.

Cyclone Aila, which had struck in 2009, devastated this eco-sensitive part of Bengal. Sundarban dwellers took several years to get back to their feet. Cyclone Amphan, which was more powerful and created widespread devastation, throws a larger challenge for the island people.

Paritosh Mondal, a Gosaba Block Development Office employee, now in-charge of medical screening for those coming in from different states, told The Wire, “Our Sundarban is unrecognisable. Thousands of people who were already impoverished now lost their houses and farmland. It’s like a death knell for them.”

We saw hundreds of trees fallen, electric poles uprooted and overhead wires snapped across different areas of Gosaba, which cut off the island from other parts of the state. However, the most far-reaching consequence is the saltwater from the sea that entered agricultural fields, increasing the soil’s salinity and likely reducing yields significantly for the next few years. 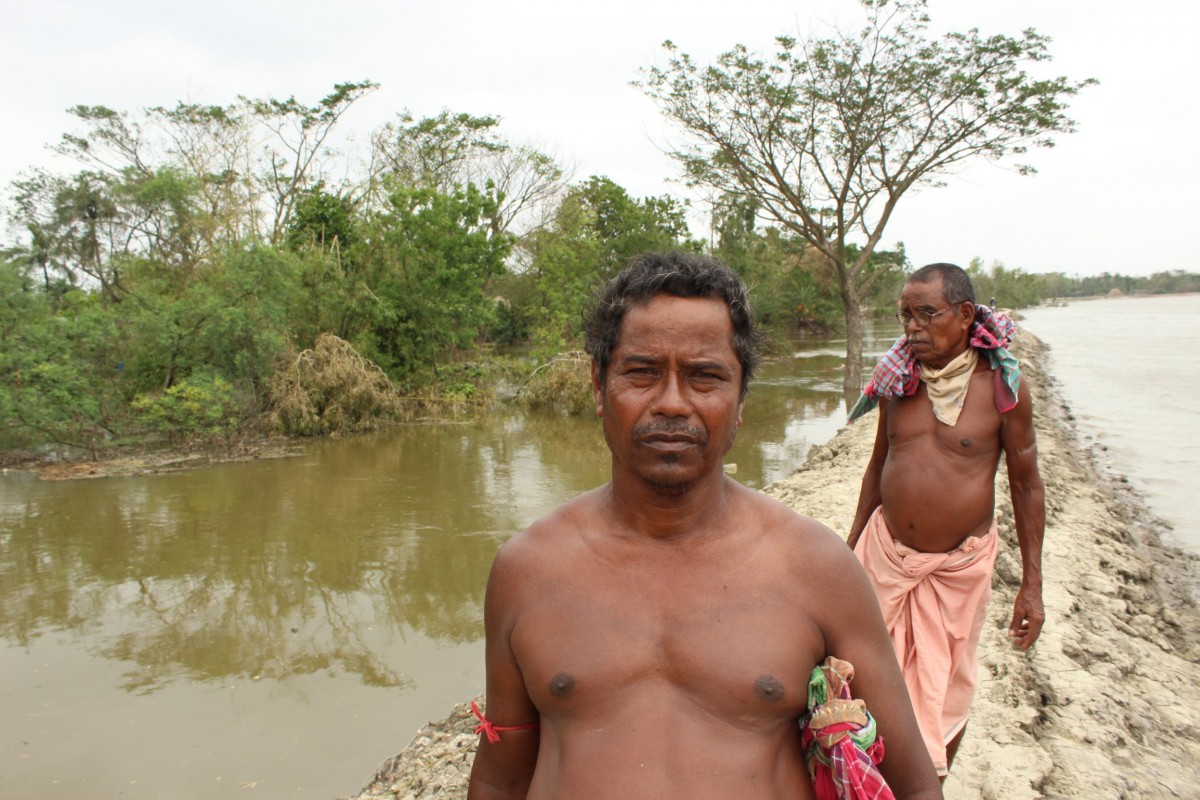 Kamal Kanti Sen, former co-ordinator of tropical soil biology and fertility management at Jawaharlal Nehru University and a noted expert on the Sundarbans, said, “After Alia, life paused on the island. I fear a similar situation this time, or even worse. A major humanitarian crisis is in the offing; hectares of land will remain uncultivated for the next two years.”

“I am really concerned about the agricultural prospects in the coming year, as almost 80-90% of farmland in my constituency is submerged in saline water. I am thinking of speaking to some agricultural experts and professors from Jadavpur University who can advise us on this. I am also open to engaging with top national and international NGOs who work in this sector. We all need come together for our poor farmers,” Pratima Mandal, Trinamool Congress MP from Jaynagar, told The Wire. 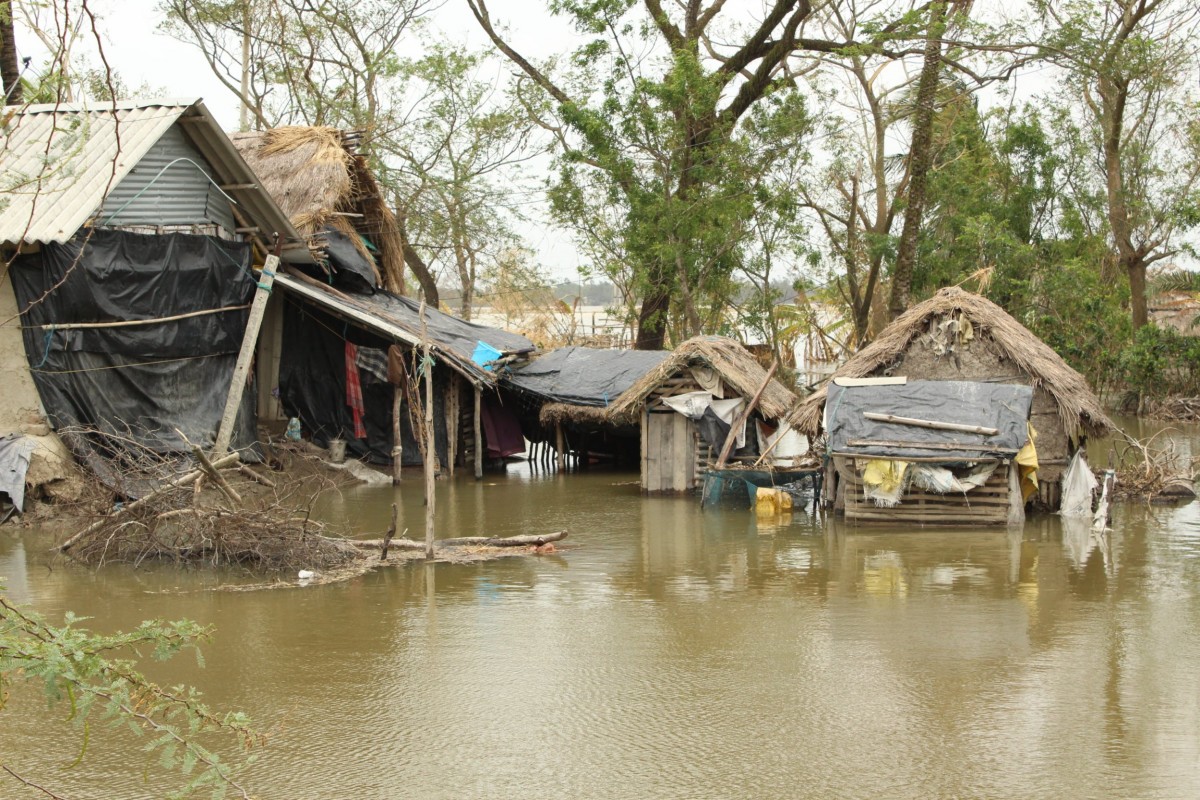 A house in Rangabelia village completely submerged in water.

As we headed back to Kolkata after a boat ride from Gosaba to Godkhali, we stumbled upon a rather tall man, wearing a red sleeveless t-shirt and blue shorts, carrying a big suitcase in his left hand. He was telling the medical check-up personnel that he was coming from Tripura.

I struck up a conversation with him. His name is Tapan Sarad. He was working as a waiter in a restaurant in Agartala. He began his journey home a day before Cyclone Amphan struck Bengal. After walking for days and hitch-hiking when possible, he reached Godkhli only to learn from his cousin that their house was washed away in the cyclone. “The first struggle was to reach home. Then I find there is no home. Maybe this is destiny,” Sarad said.

All images by Himadri Ghosh.