As Pollution from Stubble Burning Makes Headlines Again, Here Are the Issues at Stake

The Punjab Remote Sensing Centre at Punjab Agricultural University has found that the number of fires this year is already the highest since 2016. 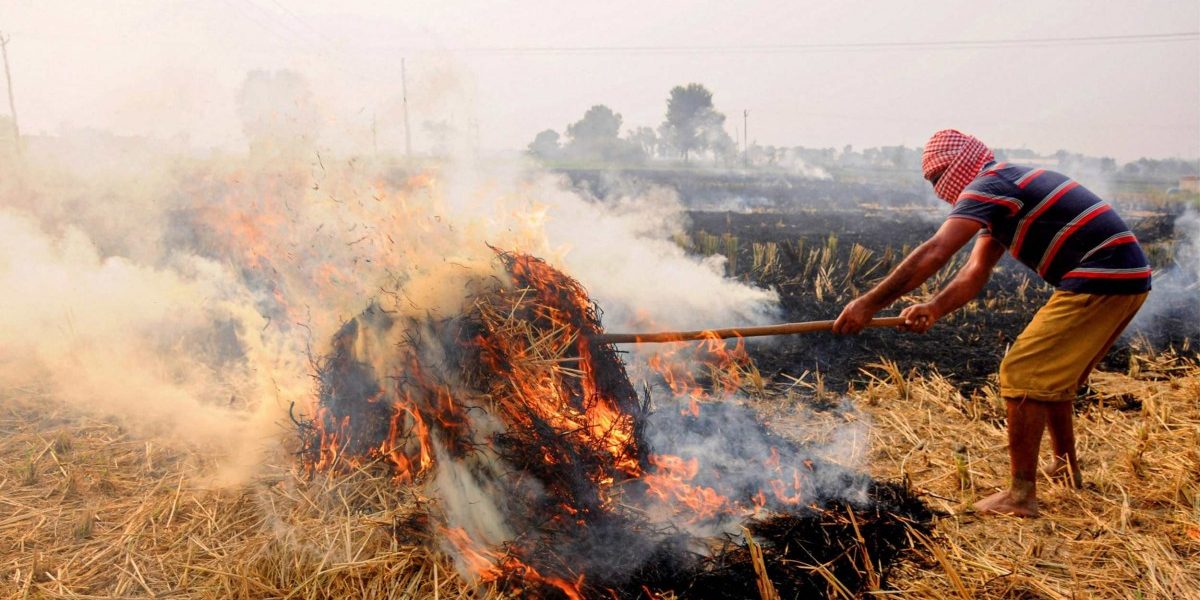 New Delhi: As farmers in India’s north finish harvesting their rice crop, thick, dark plumes of smoke and soot have risen into the air over the Indo-Gangetic plains. The state of Punjab has banned stubble-burning, but for many farmers – especially those running smaller scale operations – simply setting fire to the paddy straw remains the fastest way to clear the land and begin sowing wheat.

The fundamental issue is that, from 2009, the Punjab government has had farmers delay the start of the rice crop so that seasonal rains could replenish the groundwater first before being diverted to agriculture. On the flip side, however, there are only a couple weeks between the rice and wheat seasons, making combustion a tempting solution.

But while the state government has advanced plenty of alternatives to farmers, farmers have complained that the alternatives are still less lucrative than simply starting fires. The government also announced cash incentives but this scheme has been riddled with allegations of corruption and inefficacy. All together, as the Indian Express reported earlier today, “fields have been on fire every 100-200 metres in Jandiala Guru, Tarsikka, Tarn Taran, Khadur Sahib, and Ajnala blocks of Punjab’s Majha belt”.

NASA’s Fire Information for Resource Management System portal, which tracks major fires around the world using the Visible Infrared Imaging Radiometer Suite (VIIRS) and displays them on a world map, also showed a forest of red dots popping up across North India. According to Hindustan Times, these dots have been showing up since mid-September itself.

The density of these dots – which show fires in just the last 24 hours – hides an awful secret: according to Express, the Punjab Remote Sensing Centre at Punjab Agricultural University, Ludhiana, has found that the number of fires this year is already the highest since 2016. One reason for this could be the ‘bumper’ rice crop expected this year thanks to a surplus summer monsoon.

While the state government offered different carrots to farmers, Punjab’s state pollution control board (PCB) wielded the stick. Per Express, PCB has thus far imposed fines of Rs 25.75 lakh in 961 cases of stubble-burning, and also made ‘red entries’ in farmers’ land records, which limit farmers ability to secure future loans and subsidies.

However, only Rs 1.25 lakh has been paid up thus far. This is not entirely unusual. In January this year, The Tribune reported that the PCB had imposed fines of over Rs 6 crore in 23,000 cases last – and eventually received only Rs 1 lakh.

As A. Amarender Reddy, the principal scientist at the ICAR-Central Research Institute for Dryland Agriculture, Hyderabad, wrote for The Wire Science earlier this month, “Collecting fines from farmers is difficult, but more importantly doing so creates a hostile environment for local agricultural development functionaries.”

Stubble-burning is not new – but it became more intense after the 2009 rule to delay rice-sowing, in marked fashion on air-pollution maps from around 2016, and ultimately after the country’s capital of Delhi began to rank in the top 10 on lists of the world’s cities with the worst air. And when pressurised to do something about the problem, Delhi’s chief minister Arvind Kejriwal has regularly invoked stubble-burning as one of the causes of the city’s plight.

However, experts – as well as Union environment minister Prakash Javadekar – have said that stubble-burning is only one of many sources of pollution. The former have also cautioned that focusing on stubble-burning could allow political leaders to escape blame for not attending to point-sources of pollution within the city. These include vehicular and industrial emissions.

This said, PTI quoted a Ministry of Earth Sciences body as saying that the share of stubble-burning’s contribution to Delhi’s air pollution is “likely to increase”. PTI had also reported in November 2019, based on remarks by Central Pollution Control Board member secretary Prashant Gargava, that “stubble burning contributed significantly to air pollution in Delhi” in that year, “with the share of farm fire smoke in particulate matter peaking at 44%.”

Even this year, according to the Express report, the Ministry of Earth Sciences’ air-quality monitor ‘SAFAR’ has indicated that “farm fires accounted for 22% of the air pollution in the national capital on Saturday, and 17% on Sunday.”

For now, discussions on reprieve from stubble-burning have focused along a few lines. One is that Delhi city should ameliorate local sources of pollution, including from waste-dumping, waste-management, brick kilns and coal-fired power plants. This in turn will prevent emissions from stubble-burning from ‘piling on’. Another is that the Government of Punjab could work with farmers and persuade them to adopt alternative cultivation and straw-disposal techniques – especially the newly developed ‘Pusa’ decomposer to reduce paddy straw to mulch.

“Similarly, panchayats of villages including Balsua, Sukhalgarh, Bhoa, Sultanpur, Govindsar and Koghra have passed resolutions after taking all farmers into confidence. So far, no fire incident has been observed in these villages after the resolutions.”