As Mining Resumes, Villagers in Goa's Sonshi Say It's 'Back to Hell'

As mining makes a comeback in Goa, people’s protests against environmental pollution and destruction of livelihoods have resurfaced in the state. 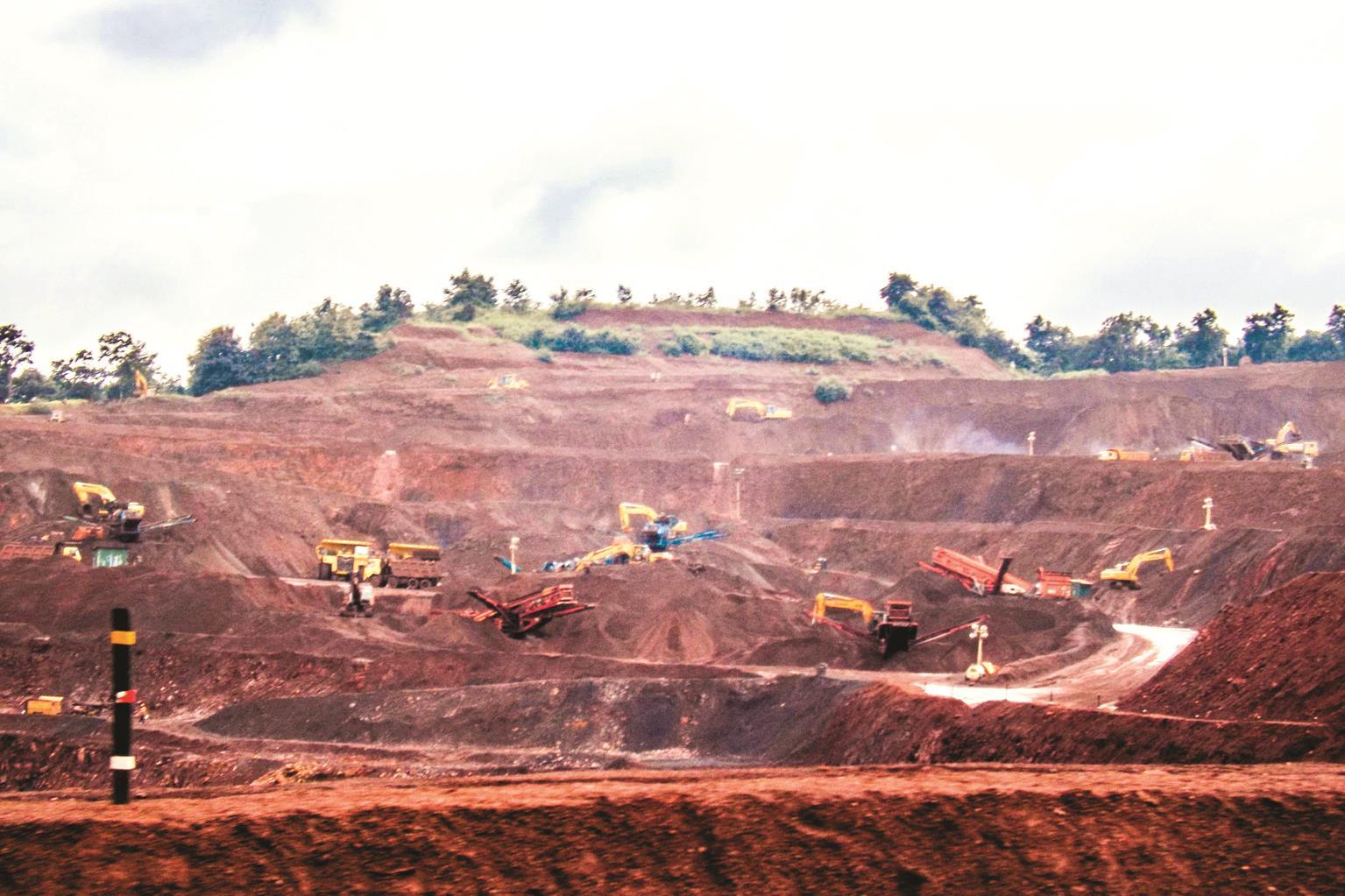 Sonshi (Goa): It’s just been a couple of months since mining recommenced in Sonshi, in the Sattari taluka of Goa, but protests by villagers and their subsequent arrest have already made it to the headlines.

On April 11, the Gowda adivasi community in the taluka took to the road to protest against pollution due to the non-stop movement of trucks loaded with iron ore in their area. They reinforced their past demands for clean drinking water, employment and health facilities. Villagers obstructed trucks and 45 of them – 23 women – were later arrested.

Although bail has been granted, the arrested villagers have still not been freed. “They are lodged in jail because of a hefty surety amount of Rs 10,000 per arrested villager, which comes to a total of Rs 4.5 lakh,” said advocate Raviraj Chodankar.

Meanwhile, the arrested villagers have refused bail, claiming that their demand for clean air and water was not a crime to have been arrested for in the first place. “Except dried up water bodies and tonnes of dust, there is nothing left in Sonshi for villagers to return to,” said Ravindra Velip, a young adivasi activist and the panch (head) of Caurem village. He was beaten up in April 2016 for protesting against the mining. He visited Sonshi on April 17 this year to get firsthand information on the goings-on.

Mining in Goa has been associated with illegalities, environmental pollution and a threat to the health of local communities. It has destroyed local water bodies and dried up rivulets. It has rendered waste large swathes of fertile land due to the improper disposal of waste. The resultant dust pollution due to mining is also a major problem. Yet the complaints of local villagers are often interpreted as being ‘misguided and a form of ‘emotional blackmail’.

Mahadev J. Araundekar, the deputy collector of Bicholim and under whose jurisdiction the case falls, said that Sonshi’s people were arrested to maintain  law and order.

“In October 2012 all mining activities were banned in Goa by the apex court leading to a financial crunch in the state,” he told The Wire. “It is only in the last one year that mining has restarted after the court lifted its ban. The mining companies had required permissions to mine and transport the ore. But Sonshi villagers were obstructing truck movement” – hence they were arrested, according to him.

However, he also suggested that a higher authority, such as a high court or the chief minister, should intervene and resolve the matter by issuing suitable directions to meet the villagers’ demands.

All said, the situation remains tense in the area, with 45 adivasi still lodged in jail.

Sonshi is an adivasi hamlet of Honda village in Sattari. It is inhabited by 60 families, and surrounded by six iron ore mines operated by Vedanta Ltd. and Fomento.

“At least 1,182 trucks have been hired by the five mine operators to transport iron ore,” according to Chodankar. “Each truck makes six, seven trips daily. The thick cloud of dust never settles at Sonshi, leading to high air and noise pollution. Velip claimed that a truck loaded with 10 tonnes of iron ore passes through Sonshi hamlet every three seconds.

Sonshi gets all of its water in tankers from one of the mine’s owners, and they claim the mining activities have dirtied the water. “For the last few years the local people have been demanding clean tap drinking water and a free health facility in the village. But both the government and the mining companies have paid no heed,” Chodankar complained.

This isn’t the first protest by Sonshi’s residents. In February 2016, they had appealed to the mining companies demanding the same things they are now: continuous supply of drinking water, employment, playground facilities for their children, a monthly compensation, clean gutters and trenches, street-lights, etc. No action was forthcoming.

A month later, in March, over 100 people from Sonshi were taken into preventive custody as they prepared to block trucks carrying iron ore for e-auctioning. This year again, on January 27, villagers tried to block the trucks again.

“The mines at Sonshi have been operational since 1999, but a spurt came after 2007,” explains Velip. “Since then the situation has gone from bad to worse. For two, three years there was a respite when mining was banned but now it is back to hell for the local communities.”

Environmentalists also claim that mining has diminished the potential for agriculture and horticulture in the area. “Traditionally, the adivasis of Sonshi had cultivated paddy and horticultural crops such as areca nut, coconut and spices,” Rajendra P. Kerkar, a Goan conservationist, recalled. “There was a time when Sonshi villagers were the most famous horticulturalists of Goa.”

But with mining, agricultural lands have turned barren and several villagers have turned daily-wage labourers. “It is a shame that the state’s best horticulturists are holding protests to demand menial jobs like cleaning of  roads,” Kerkar said.

Acknowledging the crisis in Sonshi, Araundekar said, “If mining companies offer regular jobs to the villagers they will stop protesting.”

According to a recent report, in a meeting between the representatives of Sonshi and the mining company, the latter refused to pay a remuneration of Rs 225 per day to women sweepers because officials felt at their work was “not satisfactory.”

In September 2012, all mining operations had been suspended in Goa because of large-scale corruption and a general mismanagement of mines. A year earlier, a public accounts committee (PAC) appointed by the state had found nearly half the active iron ore mines in Goa to have been illegal, causing the state exchequer a loss of at least Rs 3,000 crore since 2005.

Even more startling revelations emerged in the September 2012 report of the Shah Commission. It pegged the Goa mining scam at a stunning Rs 35,000 crore. Within three days, the state government passed an order suspending all mining operations in the state with immediate effect. The environment ministry at the Centre also revoked the clearances of all 139 working mines in the state.

The next month, the Supreme Court suspended all mining activities and banned the trading and transportation of iron ore in Goa. All five mines around Sonshi had been closed.

But in April 2014, the top court lifted the ban and prescribed fresh clearances and approvals for all mines from the environment ministry and the respective state agencies. The court also placed an annual cap of 20 million tonnes (mt) of iron ore extraction in Goa. It is pertinent that, between 1971 and 2011, the annual iron ore exports from Goa had increased from 10 mt to 45 mt.

In spite of repeated efforts, Glenn Kalavampara, the secretary of the Goa Mineral Ore Exporters’ Association, was not available for comment. On April 18, Vedanta had issued a statement: “It is not a standalone issue of Vedanta and concerns all mining fraternity working in the area. As a responsible and sustainable miner, we will work along with the government and stakeholders at large towards a proactive approach to resolve the crisis at the earliest. However, we would like to state that the root cause of the issue was business/economic related” (sic). As a temporary move, the company has decided to divert its trucks, bypassing the residential area of Sonshi.

And while Sonshi continues to simmer, villagers from other pollution-affected parts of Goa have been coming forward to lodge complaints against the illegal dumping of waste from sponge iron plants.

Barely three kilometres from Costi village in Sanguem taluka are two sponge iron factories. They’re situated within 100 metres of each other. Amar Naik, a youth leader from Costi village, recently documented the illegal practices adopted by these factories to rid their waste.

“Both factories regularly dump their waste into a nearby stone quarry which is on government land. They also offer money to local people to accept their waste and dump it on open private lands. This is not only causing land pollution but is a serious threat to the local water bodies as well,” he said. He has filed complaints with both the deputy collector and the mamlatdar (head of the taluka’s revenue office) of Sanguem.  So far, no action has been taken.

According to the Centre for Science and Environment, New Delhi, it is a common practice for the plants to dump their char somewhere within their premises or on nearby agricultural fields.

In line with this, an investigation into the waste disposal practices of sponge iron units in Goa is overdue. However, the authorities lack vigour. “Every day we receive several complaints from villagers. I will look into the specific case of Costi in Sanguem and get back,” said Sanjeev Joglekar, an environmental engineer with the Goa State Pollution Control Board. No reply had been forthcoming at the time of this article’s publishing.

Nidhi Jamwal is an independent journalist based in Mumbai. She tweets @JamwalNidhi.