The fate of Himachal’s monkeys are sub judice. Maharashtra and Telangana have killed hundreds of boars. At the moment, it seems innovative and long-term solutions will only be found after this year’s gunfire. 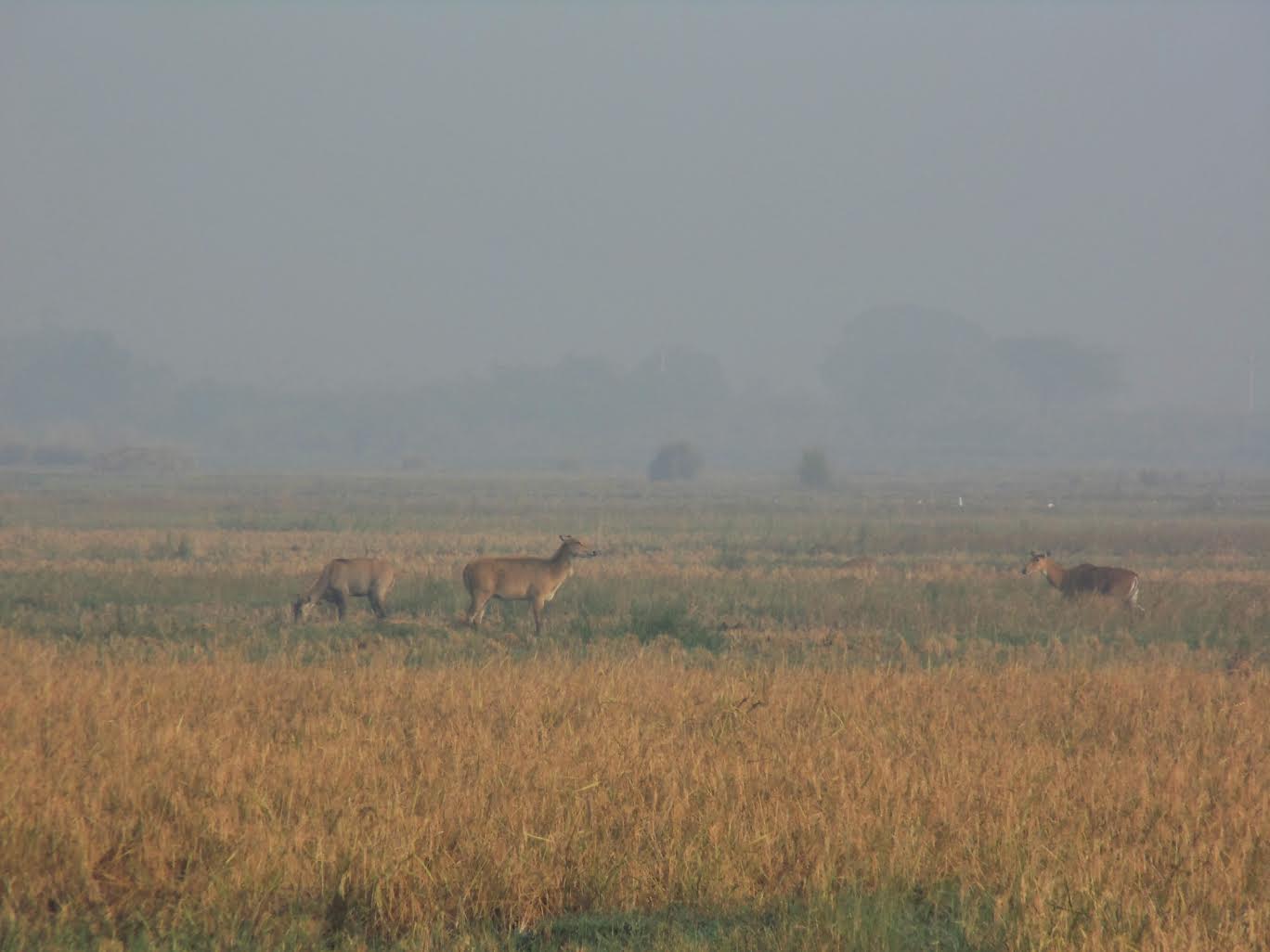 A war of ideologies has broken out between women and child development minister Maneka Gandhi and her counterpart at the environment ministry, Prakash Javadekar. Gandhi, a well-known animal rights activist, has accused Javadekar’s ministry of having a “lust to kill animals” after his ministry asked states to come up with lists of wild species which can be declared “vermin” and be killed.

Wild species are protected under the Wildlife Protection Act of 1972 – all except vermin. These vermin include animals like rats, crows and insects like termites. In the case of damage to human life, protected wild animals, like ‘man-eating’ tigers or leopards and ‘rogue’ elephants can be killed or removed, while individuals of others species with lower levels of protection, like nilgai and wild boars, can be killed or removed on specific orders even if they damage property. Moving from the occasional act of removing individual animals toward the more active decision to declare entire species as vermin has been seen as populist, and as coming at the cost of good management. Javadekar says he is helping farmers, while Gandhi questions the human-centric move of shooting the animals. A series of broad orders by states now allow animals to be killed, implying that they can also be trapped or tortured without the need to report back to the state.

Wild boar are now vermin in Uttarakhand, Himachal Pradesh and Bihar, Nilgai are also declared vermin in Bihar and can be killed. Maharashtra and Telangana have given orders to kill wild boars; Telangana can kill wild boars state-wide, while other states have specified districts for the culling. The orders range from six months to a year.

In fact, the culling of animals is one major issue on which the global environmental movements of animal rights and wildlife conservation diverge. The first focuses on individual life while the latter is about sustaining wild animal populations, even if that means the culling or removal of individual animals. The case of Ranthambhore’s tiger Ustad (moved from Ranthambhore to a zoo on charges of man-eating) was a case in point of these two ideologies diverging. The animal rights lobby wanted Ustad to be free while wildlife conservationists argued that Ustad, who had become unpopular with forest guards, should be captured for the sake of the sustaining the tiger population in Ranthambhore. But the new orders have wildlife conservationists up in arms, who say the orders are sweeping and encourage random killing.

Also read: Debate: The case for Ustad’s relocation out of Ranthambore

The first issue is the sweeping nature of the orders, which may lead to a killing spree.

For instance, the orders for killing wild boar in Telangana stated that the animals could be killed anywhere in the state, but those that appear to be ‘running back to the forests’ should be spared. “This order was full of loopholes. We already have reports that other animals, such as spotted deer, were being poached, after the wild boar culling order. Snares and traps were being laid, which do not discriminate between animals. The entire exercise is random and unscientific,” says Nimesh Ved, a representative of Federation of Indian Animal Protection Organisations. Responding to a petition, the Telangana high court then made the culling orders more specific. It said that protected areas would not be in the purview of the boar culling, and other animals should not be killed. However, the problem of who checks this and how poaching will be curbed still exist.

In other parts of India, there are other moral and social complexities to killing animals. “Himachal’s order on culling monkeys reduces a monkey to something like a louse. Anyone can kill monkeys,” says environmental lawyer Ritwick Dutta, who is fighting a case in the Himachal Pradesh high court against the order. “Additionally the orders are broad enough to stipulate that you can actually torture the monkey, trap it, and beat it.” Monkeys have for long been fed by people who believe it is a form of the Hindu deity Hanuman. “In Shimla, it is a fact that tourists feed monkeys. First you feed them, then you want to kill them,” Dutta adds.

The second problem, conservationists say, is that states will allow any citizen to kill animals because vermin by definition implies that anyone can do the exterminating. This could mean a change in attitude for the worse toward wildlife, and it may complicate the protection of other species that are still deemed protected. In Bihar, the state government first announced that people with licenses can kill nilgai, three years ago. But no one came forward. The reason? Hindus don’t want to kill an animal that resembles a cow. Further, if the Muslims in the area kill Nilgai, this could lead to communal tensions. How then would the new orders, which allow anyone to kill nilgai, sit with these traditional values – the sort of religious or spiritual values that have aided conservation?

“Nilgai are a real problem in Bihar. Their numbers have gone up exponentially because they have been feeding on crops,” says Arvind Mishra, a member of the Bihar State Board for Wildlife. The particular landscape that Bihar has – a floodplain – also means that the animals are far from forests, and unlike Telangana, can’t always be chased into forests. “The particular sociocultural beliefs of the state mean that most may not actually want to shoot nilgai. Thus it is best if outsiders come in to shoot them,” Mishra says. Thus, Bihar has employed the services of ‘Nawab’ Shafat Khan, who has been widely seen as glorifying hunting. Consequently, in Mokama taal in Bihar, 200 nilgai have been shot.

Outsiders shooting animals for pleasure or game forms the basis of trophy-hunting, followed prominently in many African countries as well as in the US. With crop damage by wild animals having come down, others ask if it is a hunters lobby that is behind the move. “Many farmers in Uttarakhand actually are abandoning their farms and moving to cities to find work. It is possible that this pro-hunting move is actually coming from a completely different lobby – the upper-class hunting lobby, which wants hunting to start in India again,” says Vidya Athreya, a scientist with Wildlife Conservation Society of India.

But if animals are to be killed, only state authorities should do it, and not individuals, others stress. “All laws, policies and guidelines in India suggest that whenever a conflict-animal needs to be eliminated, the forest department or police or paramilitary personnel are the ones who must do it under authorisation,” says Odisha-based conservationist Adtiya Panda. “This disturbing trend of favouring a particular lobby of trigger-happy shooters is very suspicious. Why is the law being bent to indulge them in state sponsored shikar [hunting] holidays in this day and age?”

The central dilemma still holds: by banning hunting in the 1970s, India has privileged certain wild species, particularly large mammals, and culling will change these attitudes. Thus, while generations within the country consume domestic animals like chicken (which, for instance, animal rights groups will not tolerate), we have balked at the thought of having Asian bear-paw soup, which comes from a ‘big, wild’ animal. The charge that we are misusing animals and subjecting them to our whims also stands; there was a massive criticism when media reports suggested that Goa mulled declaring peacocks and endangered bison as vermin.

Ultimately, culling offers revenge, but not solutions. “We cull animals for a year. Then what happens? We still need to find solutions to crop-raiding by animals,” Athreya says. Panda adds, “Given the population dynamics of India and the minuscule proportion of our land area remaining under wilderness, it is never a case of too many animals here, it is always a case of too little habitat. Shooting animals like this is just random and not solution-oriented.” In fact, he suggests moving Bihar’s nilgai to Jharkhand.

“Bihar may complain of an excess in nilgai but neighbouring Jharkhand’s Palamau Tiger Reserve is practically bereft of sufficient populations of large prey species and could easily have taken in Bihar’s ‘excess’ nilgai. The 200 Nilgai that Bihar culled could have technically formed the prey base to sustain two tigers for their lifetime!” Such experiments – of restoring populations of large animals by translocation – have been done before. For instance, Indian bisons – towering, one-tonne animals – were translocated from Kanha to Bandhavgarh in 2012. Other solutions that have been used have been crop-insurance against animals, and strip-cropping to avoid planting large swathes of edible crops.

At the same time, other problems that create conflict between animals and people remain. These include vanishing forests and fragmentation of habitat; 14,000 square kilometre of forests were cleared in the last thirty years for industrial projects and artificial feeding of animals either by people or unattended garbage.

Mishra says Bihar can consider having a holding facility for nilgai, and the state will be open to innovative solutions. The fate of Himachal’s monkeys are waiting for the court’s decision. Maharashtra and Telangana have killed hundreds of boars already. At the moment, it seems innovative and long-term solutions will only be found after this year’s gunfire.