The Ship Recycling Industry Must Move Towards a Sustainable Future

Shipbreaking in South Asia exploits poorly enforced coastal zone management laws and flourishes on the back of a cheap and replaceable labour force. 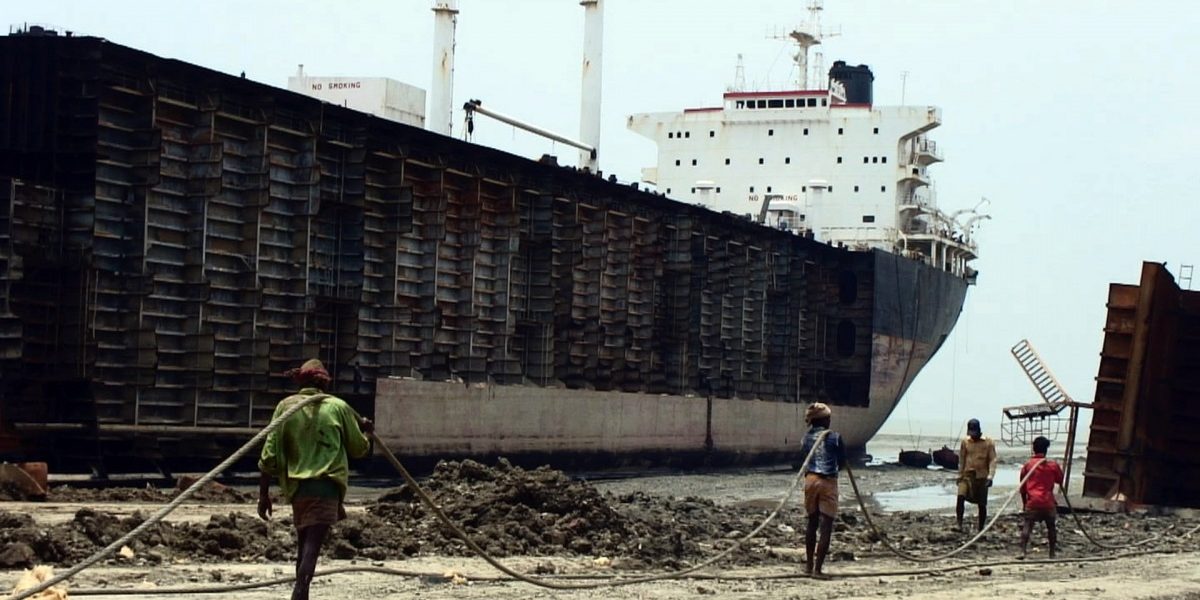 Finding a balance between environment, economic growth and human rights in promoting industrialisation and development has always been a difficult task for policymakers in developing countries. The shipbreaking industry in developing countries is one sector which in the recent past has increasingly come under pressure from both global and local stakeholders to continue its operation in a sustainable way.

Recycling of ships is by far considered the most environmentally-friendly and economically sound way of getting rid of end-of-life ships. Until the 1970s, ships were mainly dismantled in Europe and in the US. However, due to stricter social and environmental protection laws in the Global North, the industry shifted to areas where legal frameworks and enforcement mechanisms are weak. Information consolidated by the NGO Shipbreaking Platform reveals that over the past 10 years, more than 70% of the estimated 800 vessels that reach the end of their operational life annually – representing 80-90% in terms of tonnage – are scrapped on the beaches of Alang in India, Chattogram in Bangladesh and Gadani in Pakistan. 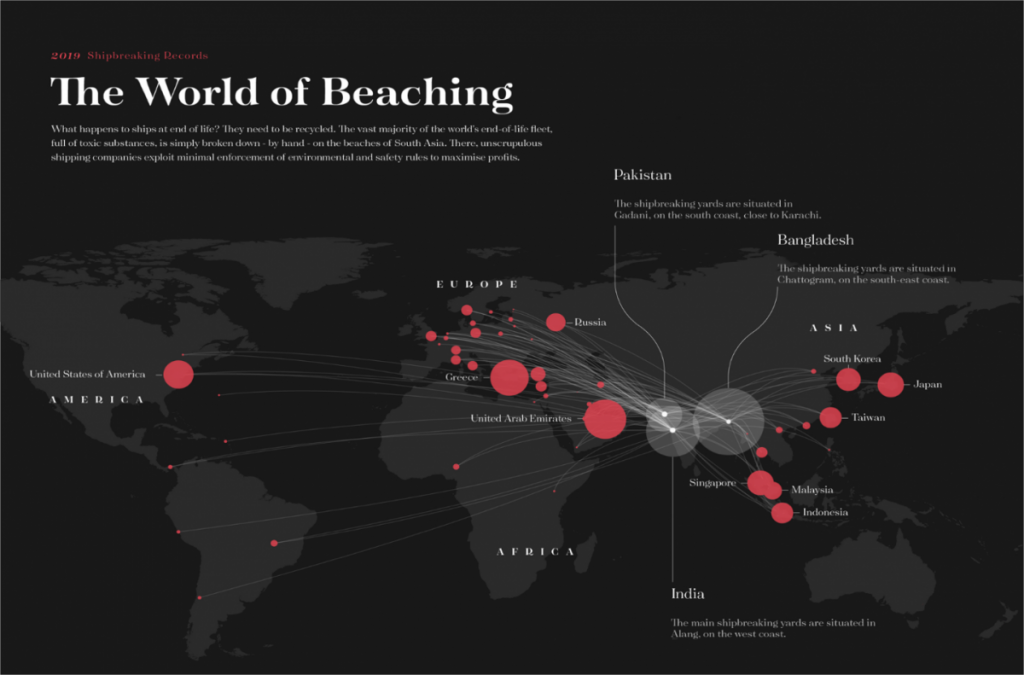 The beaching of ships started, not because it was safer or more environmentally sound, nor the most efficient method, but rather due to the higher price offered to ship owners. In the 1980s, when shipbreaking in South Asia started, coastal zone management laws were poorly enforced or non-existent, and business could start without any investments in infrastructure and based on a cheap and replaceable labour force. As the vessels are grounded deliberately during high tide and breaking operations usually take place during low tide, when the vessel is not submerged by the sea, the beaching method operates in the intertidal zone.

Shipbreaking at what cost?

Shipbreaking is a heavy and dangerous industry that exposes workers to high risks of accidents and occupational diseases and the environment, including air, sea and ground to a high number of pollutants. According to the ILO, shipbreaking has become an environmental health problem and it is amongst the most dangerous jobs in the world. Over the last decade, 210 workers died working at the shipbreaking yards in Chittagong. In Alang, the International Law and Policy Institute’s 2016 report says that 470 workers died between 2005 and 2012 and between 2013-2018, around 50 deaths were registered. In Gadani, at least 51 workers have lost their lives.

Despite the hazardous conditions and weak enforcement of labour laws, the ship owners in Western countries prefer to send their ships to South Asia to get a better price than other shipbreaking yards in the world. The amount paid to the ship owner for the sale of an end-of-life vessel depends on the price the recycler is willing to offer per light displacement ton of steel. The price (demolition rate) differs from region to region and tends to fluctuate over time depending on external market factors, such as freight rates and national currency devaluations.

Apart from the price difference due to the different domestic markets for steel products, the price gap reflects cost differences related to environmental management and safety. Beaching yards externalise these costs to the environment, workers and local communities and are thus able to offer higher prices for the ships. In general, the higher the price offered, the worse the breaking will be in terms of worker and environmental protection.

Taking the case of shipbreaking yards in India, the beach in Alang is one of the main destinations for end-of-life vessels. Following legal actions taken by NGOs, the Indian Supreme Court directed the industry to align itself with national and international labour and environmental laws. The government reacted by adopting the Ship Recycling Code in 2013 and the setting up of a waste reception facility. Yet, the conditions in Alang remain appalling. Over the years, a study by the Indian National Human Rights Commissioned and media reports have exposed breaches of labour rights, disregard for labour laws and safety standards.

How to balance labour rights, environment and economic interest?

The major potential of ship breaking yards in South Asia is that it absorbs large swaths of migrant workers and places them into indecent paying jobs. In addition to employment opportunities, the ship breaking yards also generate significant revenue for the state and contribute enormously to the steel requirement of India, Pakistan and Bangladesh.

But economy, employment, steel production and environment – all are under threat today. The number of ships coming to South Asian countries for recycling has declined in the recent past. For instance, in Alang, India, information published by the Gujarat Maritime Board reveals that the number of ships for scrapping has gone down in the past few years. 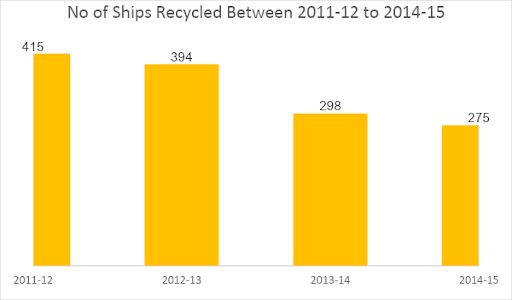 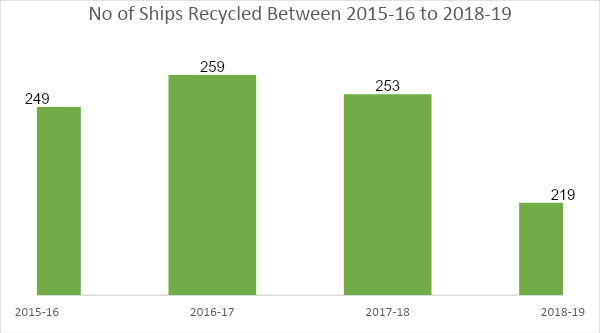 There are several reasons for this state of affairs in the shipbreaking yards of South Asia but the most important factor has been the non-compliance of labour and environmental rules and regulations, accompanied by international agencies’ campaign towards a sustainable ship breaking industry.

Over the last one decade, international agencies have increasingly emphasised the effective implementation of international conventions such as Basel Convention, 1989 and guidelines issued by the ILO and International Maritime Organization (IMO) to address various issues around shipbreaking. The Basel Convention on the Control of Transboundary Movements of Hazardous Wastes and Their Disposal entered into force in 1992 and regulates the international trade of hazardous wastes and it is relevant for ship dismantling as a ship usually contains hazardous materials in its structure. The Convention bans the export of toxic waste – including ships- to developing countries, yet it is in large circumvented by the shipping industry in order to facilitate the continued externalisation of environmental and labour costs.

Also Read: The Ugly Side of Pakistan’s Ship-Breaking Industry at Gadani

However, instead of implementing the Basel Convention, the shipping industry in South Asia pressed for another, though less restrictive legislative instrument at the International Maritime Organisation. Adopted in 2009, the Hong Kong Convention (HKC) has not yet entered into force but it has been ratified by India in 2019. The standards set by the Convention have been strongly criticised by NGOs, the UN Special Rapporteur on Toxics and Human Rights, the Centre for International Environmental Law, European policymakers and the majority of developing countries party to the Basel Convention for its low standards and for simply rubberstamping beaching, a method which is banned in major ship owning countries. There has also been a proliferation of the so-called Statements of Compliance with the HKC, statements that are issued on a business-to-business basis and are yet another attempt by the industry to greenwash the dangerous and unsustainable practices in South Asia.

Attempts have been made at all levels in India, Pakistan and Bangladesh to promote HKC even though it compromises on beaching method. For instance, the Japan International Corporation Agency (JICA) has made an agreement with the Indian government to support the shipbreaking yards in Alang in achieving the requirements of the HKC. However, JICA has not rejected the use of the beaching method, and therefore the Environmental Impact Assessment upon which the agreement was approved is currently being contested in the National Green Tribunal. 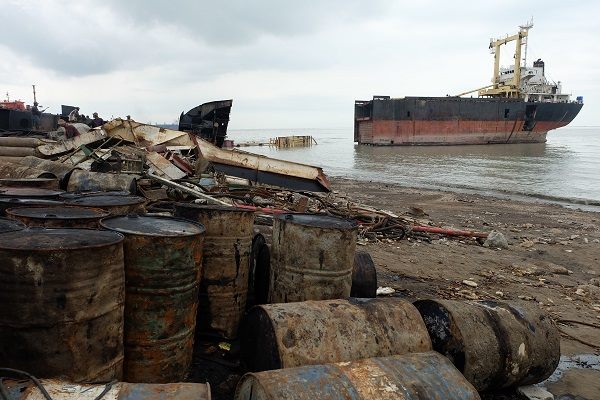 Indeed, a beach does not have the conditions that are needed to recycle a ship in an environmentally sound manner. Even if arrangements were put in place at the beaching sites for the treatment of asbestos and Polychlorinated Biphenyls (PCBs), for example, the fundamental problem of containing and collecting the pollution would be impossible to resolve. The toxic materials contained inside the ship’s structure need to be properly located, identified, removed and disposed.

Expressing concerns over the labour rights and environmental pollution issues in the shipbreaking yards, the European Union Commission evolved the Ship Recycling Regulation (EU-SRR) Code, which is in operation since December 30, 2018, and requires the ship owners to send their ships only to certified green yards. European ship owners are responsible for one third of end-of-life vessels that are dismantled on the beaches in South Asia. Due to lack of proper waste reception facilities, workers’ safety and health facilities, and cooperation from ship owners to provide the necessary documentation, not a single shipbreaking yard from India, Pakistan and Bangladesh has found its place in the green yard list of the EU-SRR. This is going to be a major deterrent factor for the ship owners to send their ships to South Asia shipyards.

The situation will be very alarming for South Asian countries if the ground situation does not improve and shipyards don’t shift to sustainable shipbreaking practices. The yards have not many options to sustain since the domestic politics, power dynamics and lobby are not going to convince the ship owners who are now increasingly preferring green yards in Turkey, China and European countries to dismantle their ships. In the short run, some of the South Asian shipyards might succeed to manoeuvre the regulatory process but it is not possible to sustain in the long run.

Sara Costa is an independent researcher working from Belgium. Geetanjoy Sahu teaches at the Tata Institute of Social Sciences, Mumbai.