While the case is now scheduled for the next hearing on August 28, the final outcome of the damage caused, if any, will ultimately be decided based not on rhetoric but on some solid scientific evidence. 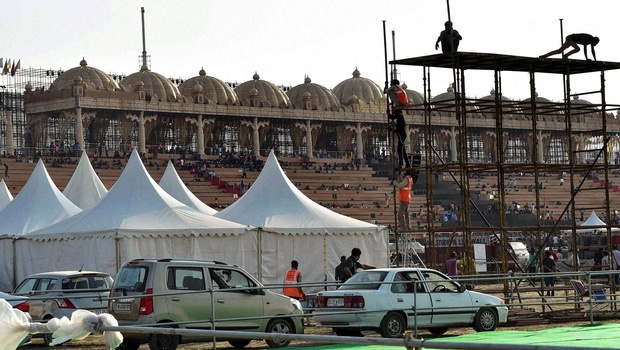 Satellite imagery of the Yamuna floodplain – before and after the Art of Living Foundation (AOL) held a World Culture Festival there – now appears to hold the key to the National Green Tribunal deciding on whether and how much the event harmed the fragile biodiversity of the area.

The expert committee, constituted by the tribunal to investigate the ecological damage to the floodplains, submitted a report on its findings on July 28. Based on satellite images from March 15 and May 10, as well as observations from a site visit in June, the committee reported that the “entire floodplain area used for the main event site” had been “completely destroyed” and that the ground was now “totally levelled, compacted and hardened, totally devoid of water bodies or depressions, and almost completely devoid of any vegetation”.

However, AOL has trashed these findings.

While interacting with the media on Thursday, an AOL spokesperson said that “no wetland” ever existed on the Yamuna floodplain and no environmental clearance was required for conducting social or religious events like the Kumbh Mela on the floodplain. Apart from this, a team of environmental experts, speaking on behalf of the foundation, have also argued that they have authenticated satellite evidence as proof that contradicts the expert committee’s assertions that “cultivation and agricultural activity” had been taking place at the site.

Rejecting the findings of the expert committee, which also asserted that the event had caused “invisible loss of biodiversity” and that this biodiversity “may never be able to return”, the Art of Living stated that “no wetland” ever existed on the Yamuna floodplain, where the main event took place. It insisted that “the [expert committee] report shows no application of mind and is based on just visual assessment. There is no reasoning that supports the conclusions they seem to have come to. There is no analysis, no in-depth investigation, nor any test reports to support these conclusions. Considering the facts above, the report submitted by the committee amounts to nothing less than a scientific fraud.”

As a trustee of the Sri Sri Institute of Agricultural Sciences and Technology Trust, Rao, was quoted as saying that the foundation had authenticated satellite images from April 2000 “that show that the DND flyway is complete, contractor road is made, and alongside the slope is the compacted road. We have spot Google images, which are authenticated with a stamp from 2000 up to 2016, that clearly show this to be an agricultural land.”

Rao also insisted that the foundation had “satellite images from 2000 which show that the roads and the ramps already existed. These ramps and roads are now wrongly alleged to be made by us. Images also show there was no biodiversity in this part of the floodplain given to AOL. A picture from 17 April of the core area where the stage actually stood shows that the grass has started growing again. That shows that the roots have not been touched and no damage done at all.”

While the case is now scheduled for the next hearing on August 28 and AOL has made up its mind to pursue its demand for reconstituting the seven-member expert committee – which is chaired by water resources secretary Shashi Shekhar and comprises environmental experts C.R. Babu and Brij Gopal among others – the final outcome of the damage caused, if any, because of the event, will ultimately be decided not on the basis of the rhetoric but on some solid scientific evidence which both sides claim to be in possession of.