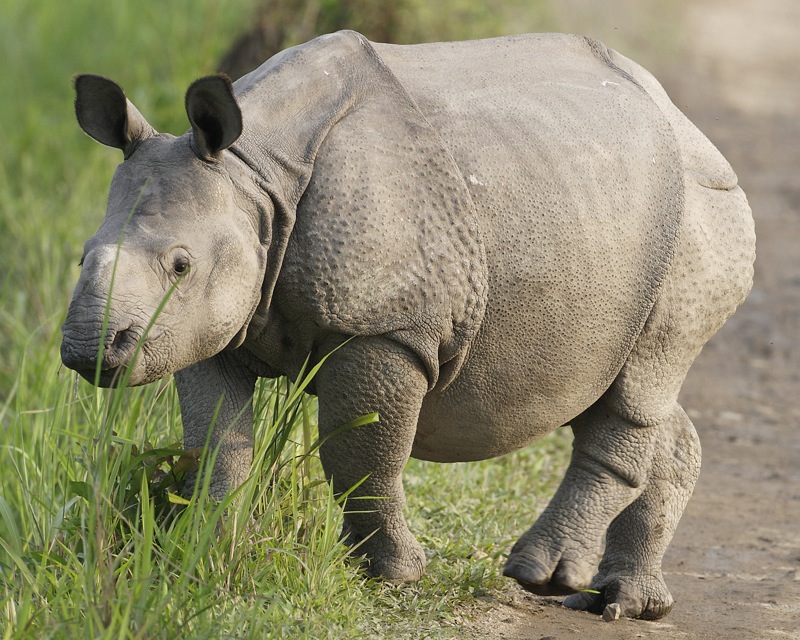 It takes less than 20 mg of rhino horn to prosecute poachers. This is all scientists need to discover a rhinoceros’ unique DNA pattern, a sort of genetic fingerprint investigators can use to link criminals involved in poaching and trading of rhino horn to individual mutilated or killed rhinos.

This technique might sound like it came out of a forensic crime TV series, but it was developed and implemented by researchers in South Africa and will soon be used in India as well, with the state of Assam playing a lead role. 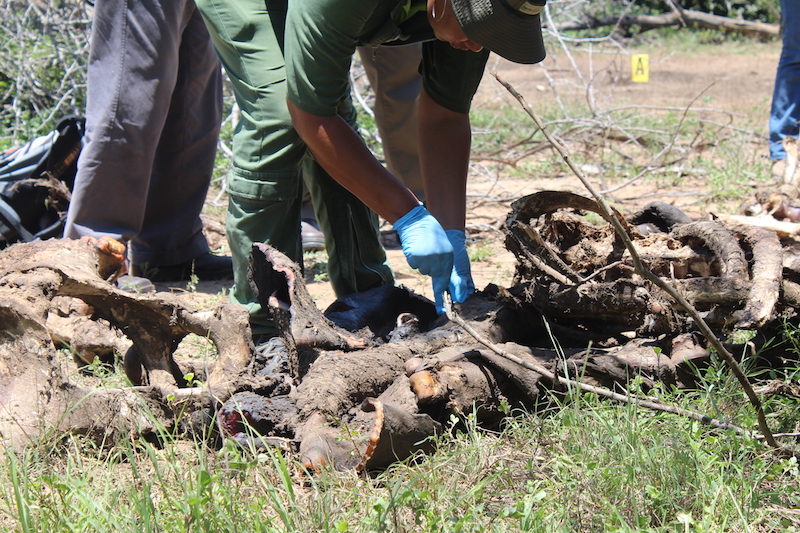 South Africa currently is at the epicentre of a poaching epidemic driven by East Asian demand for rhino horn as a status symbol or a traditional medical treatment. Between 2007 and 2015, rhino poaching in South Africa increased almost 90-fold, from 13 rhinos killed in 2007 to 1,175 in 2015, according to United Nations Environment Program (UNEP) data.

In comparison, poaching of Asian rhinos currently occurs on a much smaller scale. In India’s Assam state, where the majority of greater one-horned rhinos (Rhinoceros unicornis) live, poaching numbers soared in the 1980s and 1990s, peaking with 49 rhinos killed in 1992, before falling off dramatically in the early 2000s. But numbers have crept up in recent years, with 22 of Assam’s rhinos killed by poachers in 2016. While the species’ population growth remains healthy, poaching is a constant threat.

Meanwhile, the critically endangered Javan and Sumatran rhinos have such small populations that, while poaching cases are few and far between, the premature death of even a single animal can have an impact on the species as a whole.

To keep the rhino death toll down and to help secure convictions of wildlife traffickers, conservationists and law enforcers need every available tool in their arsenal. DNA profiling has proven to be a powerful one.

Rhino DNA: from field to database to court

The Rhino DNA Index System (RhODIS) was born in the University of Pretoria’s Veterinary Genetics Laboratory (VGL) in 2010. Since then, the RhODIS team has prepared more than 200 forensic reports, securing at least six high-profile convictions thus far including Xuan Hoang – a Vietnamese citizen sentenced to 10 years’ imprisonment after being found with poached rhinoceros horns in his baggage at the Johannesburg airport. On top of that, the RhODIS database has played a crucial role in identifying the origin of many recovered horns, such as those recovered from a Vietnamese trafficker less than six weeks after the rhinoceros were poached in Kruger National Park. 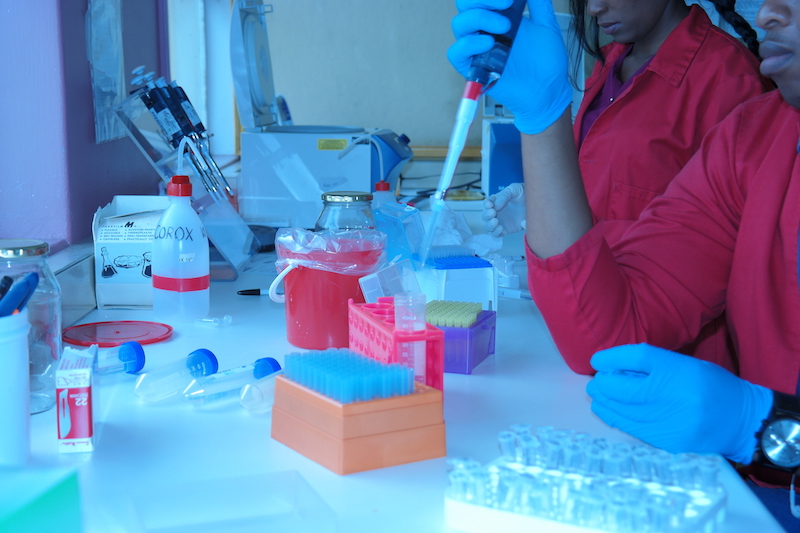 These reports don’t necessarily translate into criminal convictions. VGL notes that while South African authorities made 1,164 poaching arrests from 2010-2014, fewer than 5% resulted in convictions. Still, that’s better than the 2.6% conviction rate in 2010.  RhODIS has proven to be so reliable that in 2012 the South African government made it compulsory for researchers and law enforcement officials to collect DNA samples from dead rhinos – including those that die of natural causes — and rhinos that receive veterinary care.

RhODIS has expanded into other African countries. “The African rhinoceros range states that have utilized the system for both poaching investigations and databasing their live rhino DNA include Kenya, Malawi, Namibia, Zambia, Zimbabwe, Botswana, Uganda and South Africa,” VGL’s Cindy Harper told Mongabay in an email.

The University of Pretoria is the custodian of this database. It currently holds the data of more than 30,000 African rhinoceros individuals. It includes samples from both living and dead rhinos, rhinoceros horns kept in stockpiles, and trophies. It also holds DNA samples from suspects’ weapons and clothing that can help link them to specific poaching incidents.

How does the RhODIS system work?

The concept behind RhODIS is based on a DNA indexing system developed by American law enforcement to track the genetic fingerprints of human criminals.  It uses genetic sequences called “short tandem repeats” (STRs) to get a sort of bar-code unique to each animal, which includes a sex marker and a species marker that differentiates between black and white rhinos (Ceratotherium simum and Diceros bicornis, respectively).

Researchers are now working to build a similar database for Asian rhinos. “We have used the RhODIS DNA profiling panel on Indian rhinoceros from zoos in Europe,” Cindy Harper said, adding that VGL already sent a set of their primers (short pieces of DNA) to Samrat Mondol at the Wildlife Institute of India (WII). This, she explained, will allow him to test the panel on free-ranging Indian rhinos, compare results and eventually confirm the usefulness of the panel in these animals. 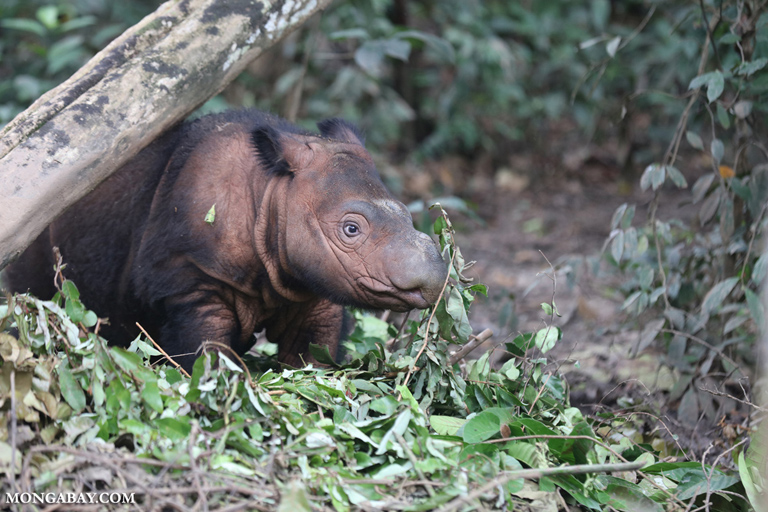 A baby Sumatran rhino at Indonesia’s Sumatran Rhino Sanctuary. Fewer than 100 of the species are known to survive. Credit: Rhett Butler/Mongabay

“It may, however, be necessary to add some more markers to the test panel to support match probability statistics in the Indian and Asian rhinos,” said Harper, stressing the fact that her team has not yet been able to get samples from Javan and Sumatran rhinos to test.

Harper’s team has developed three different kits to collect the samples: the forensic kit is used to recover DNA from poached rhinos; the horn kit was developed for collecting DNA from horns; and the routine kit designed for taking DNA from live rhinos as they are trans-located or undergo any sort of intervention.

Each kit contains equipment to collect, store and transfer tiny samples of blood, horn and ear tissue. After collecting samples with disposable scalpels and drill bits, handlers package the specimens up, fill out forms with details about the animal, and seal everything in a forensic evidence bag. “This ensures chain of custody of the bag contents even when routine samples are taken from live animals and rhino horns, since the bag must reach the laboratory sealed” explained Harper.

Researchers have also developed eRhODIS, a set of smartphone apps that guide users through the sample collection and submission process. 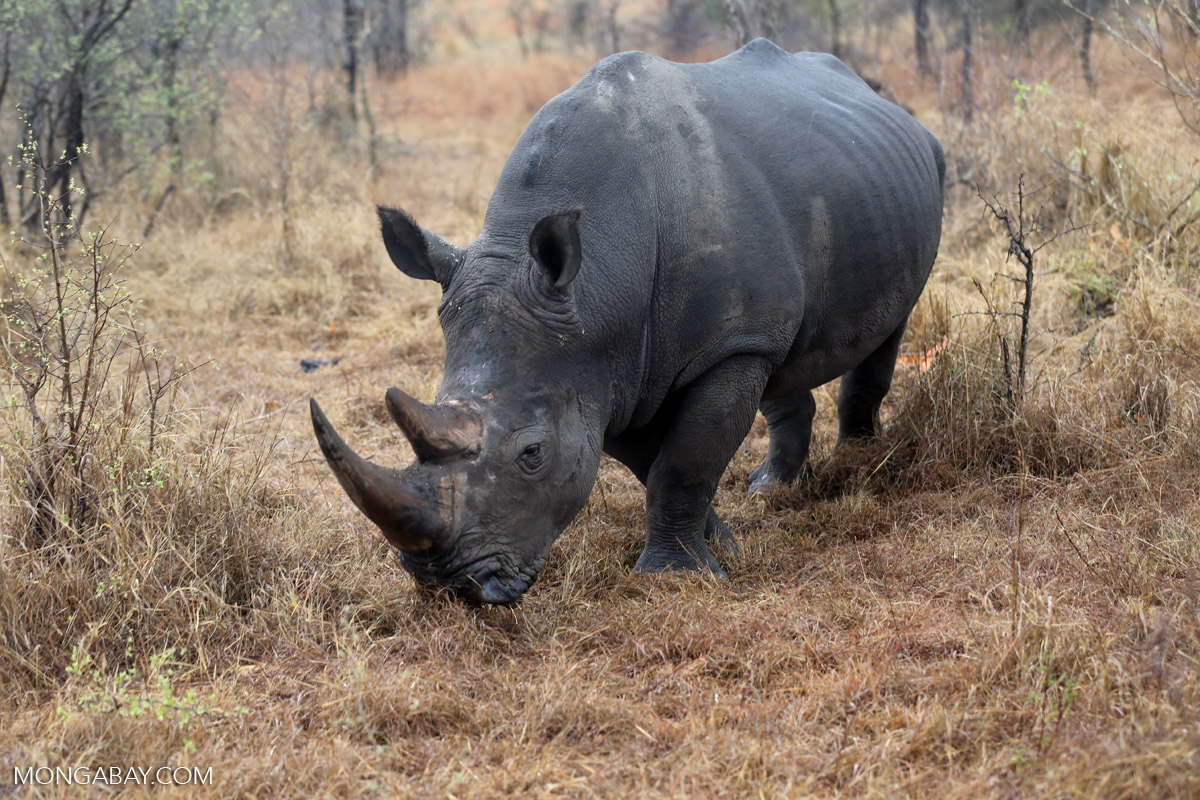 So far, the RhODIS team has provided training to more than 400 law enforcement and conservation workers from Africa and beyond. The latest training workshop, organized by VGL together with TRAFFIC, WWF and TRACE Wildlife Forensics Network, was held in June 2016 in South Africa’s Kruger National Park. It brought together wildlife DNA forensic scientists, enforcement officers and investigators from Malaysia, Thailand, Vietnam, Indonesia, Hong Kong, South Korea, South Africa, Kenya, Botswana, Namibia, the Netherlands, the United Kingdom, Australia, the Czech Republic and India.

“This really brought home the reality of the rhino horn trade … and justifies our recent transfer of 14 seized rhino horn samples to the South African Government for DNA testing by RhODIS in order to aid in enforcement activities,” Jeffrine Rovie of the National Wildlife Forensic Laboratory in Malaysia said in a press statement.

The RhODIS team aims to develop a global database, and hopes that more and more countries will embrace this technology soon. India is next in the pipeline.

In May 2014, WWF organized a three-day RhODIS workshop in Assam with support from VGL’s Cindy Harper. This training was attended by researchers and officers from India’s Forest and Police Department, and officials from Nepal.

Amit Sharma, WWF India’s senior coordinator of rhino conservation, was among the organisers of this workshop and attended all the sessions. In September 2015 he also accompanied a delegation of Indian officials to South Africa, where they learned about the field implementation and laboratory operations involved with the system. Today he is a strong advocate of RhODIS’ use in India.

“RhODIS calls for very careful management of the crime scene and it was a very enriching experience for me to have these learnings from these workshops which have given me the confidence to take ahead the program in India with our partners,” Sharma told Mongabay in an email.

However, even if there has been talks about bringing RhODIS to India for years, the implementation of the system in this country is still at an early stage. Sharma believes the biggest challenges are developing procedures for the local implementation of RhODIS, and getting reliable results from the laboratory within a short time.

“[T]o get RhODIS accepted widely will be another challenge since to get this fully implemented all the enforcement agencies operating in the country have to contribute with full confidence,” he added.

Still, he believes the successful use of RhODIS in India could help strengthen partnerships with South African and other global agencies working towards zero poaching of rhinos. “I think this holds a lot of promise in the near future to save the species from poachers,” he said.

RhODIS has not yet been tested on Asian rhino populations, so there is still much work to be done. But Indian researchers and politicians have accepted the challenges, and the program will reportedly be rolled out early this year.

“The Ministry has already issued the necessary official notification for initiating RhODIS in India,” Sharma said. “Wildlife Institute of India has been identified to be the agency to develop a functional RhODIS laboratory and also prepare scientific evidences for the legal system. WWF India has been supporting the initiation of RhODIS in India and has offered all necessary support to facilitate the set-up of a functional RhODIS laboratory in India in addition to capacity building of the scientists and forest personnel.”

Once this system proves to be valuable to rhinos in the Indian sub-continent, Sharma said, it can be used to protect all the Asian Rhino species. And as South Africa is playing a lead role in the African continent, he suggested, India could do the same in Asia.

“The wildlife trade hub is mostly concentrated to Asia as such successful implementation of RhODIS in the region can be very crucial for long-term protection of the species in the region [and] even promoting a stronger global partnership amongst the enforcement agencies,” said Sharma.