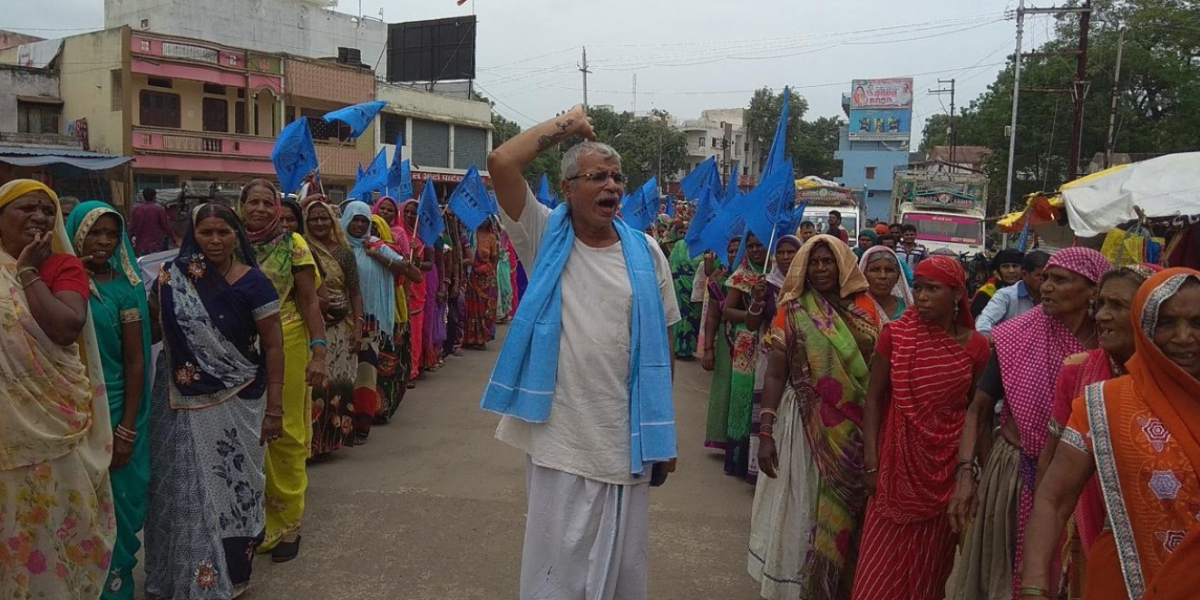 While the country celebrated its 75th year of Independence on August 15, 2022, we lost one of the strongest voices of the Himalayas, Vimal Bhai.

A prominent name in the fraternity who led various social and environment movements, fought for the betterment of the people, rivers and forests, Bhai took his last breath at All India Institute of Medical Sciences in Delhi, battling tuberculosis and multiple organ failure.

His four-decade-long fight against ill-conceived developmental projects played a very important role in giving a direction to the Indian environmental movement. At the age of 22, he became a Gandhian under the guidance of Bina Handa from the Gandhi Hindustani Sahitya Sabha (Sannidhi). He also gave up his surname.

“He was always inclined towards theatre and poetry, and used to visit me to learn spinning charkha,” Handa told me over the phone.

It was his meeting with Handa which proved to be a turning point in his life. He used to work with children in Delhi’s Bela village and later moved to a village in Varanasi. However, the village where he was working was a Brahmin majority area and they did not like Vimal calling ‘lower’ caste children to their locality. 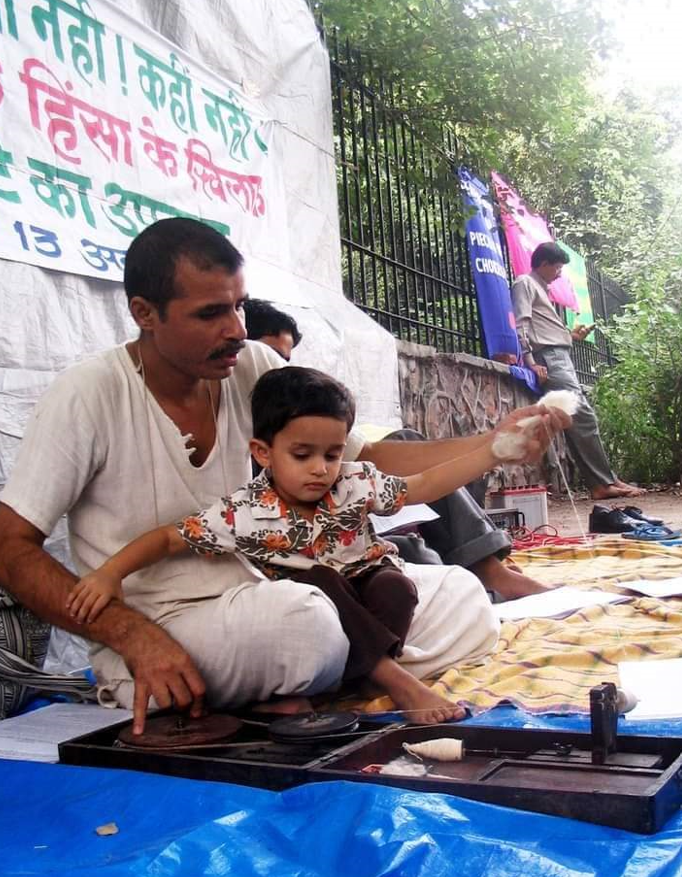 He then came back to Delhi. “He was a very sensitive person and we found him very restless whenever he saw anyone helpless. He would give everything and devote himself completely to their service,” she added. Back then, Sunderlal Bahuguna, leader of the Chipko movement and Tehri Dam protests in Uttarakhand, also used to stay at Sannidhi, and Vimal had started interacting with him.

He became very close to Sunderlalji and moved to Uttarakhand to support him. He became a popular name in the Tehri movement and soon came to be known as ‘Vimal Bhai’.

Bhai also worked closely with some great social reformers of that era like Father Thomas Kocherry and Baba Amte. According to people close to him, his public speaking skills and policy advocacy work improved during his association with Father Kocherry. He was a close friend of Swami Agnivesh, the founder of Arya Sabha, who remained one of the greatest supporters of Vimal Bhai’s work.

Bhai had been fighting for people on the Tehri Dam issue since the early 90s. During the case, he met Sanjay Parikh, who is now a senior advocate at the Supreme Court. He had been coordinating all the legal matters related to the implementation of the top court’s order in the case.

However, the Tehri dam issue was only the beginning of their struggle as the Government of India later proposed hundreds of small and big hydropower projects in Uttarakhand.

He later established Matu Jansangathan ((Matu: soil, Jansangathan: people’s union) – a collective people’s movement to fight against the environmental and social impact of dams in the state.

By that time Bhai had evolved from an activist into an institution, trained by the greatest environmentalists and social activists of that era. He married old school social activism with modern day legal and technological tools. He learnt the technicalities of the Environmental Impact Assessment (EIA) notification, 2006 and used it for the people’s movement. At the same time he documented people’s struggles through photographs and videos by publishing them on blogs, YouTube and email.

He was one of the few activists of his generation who used to carry an office with him. His laptop, android phone, a couple of SIM cards and a power bank always accompanied him wherever he used to go. He travelled to villages where hydropower projects were planned, participated in public hearings, some of which were called off due to local protests, and trained the affected people about the EIA process.

He was even arrested on several occasions, but for a true Gandhian activist like Vimal Bhai, this would only give him more strength.

His way of activism

Improving transparency and holding institutions accountable was the forte of Vimal Bhai’s way of activism. He had an outstanding capability of mobilising people and transforming them into an activist.

Even when he lost a case against a dam company, he followed it up with the implementation of environmental clearance conditions and took legal resorts wherever necessary. For example, the Srinagar dam case where he opposed the project for carrying out illegal muck dumping along the Alaknanda river which led to a massive disaster in the town during the 2013 Uttarakhand floods. Bhai mobilised the residents to form the Srinagar Bandh Apada Sangharsh Samiti and moved the National Green Tribunal to compensate them for the losses. In its order, the NGT directed the dam company to compensate the victims.

He also highlighted the institutional concerns of the National Environment Appellate Authority in the Delhi high court and Supreme Court, which led to the formation of the National Green Tribunal.

Also read: The End of an Era of Indian Environmentalism

He inspired many environmentalists and activists. Manoj Misra, founder of the Yamuna Jiye Abhiyan, says Bhai supported him in starting the Abhiyan. Bharat Jhunjhunwala, an economist and a Ganga activist, whose petition in the Supreme Court led to the imposition of moratorium on new dams on River Ganga after the 2013 floods, says, ‘Vimal was instrumental in bringing me to the river movement. May there be a thousand of Vimals.’ Jhunjhunwala told this correspondent how he was a pro-dam person and meeting Vimal changed his perspective altogether.

When I first met Bhai in 2013, he was wearing a Khadi kurta and lungi, and a gamcha was tied on his forehead. He was carrying with him a couple of handmade bags. Later I came to know that he stitches his own clothes using a charkha. However, what surprised me more was when he opened his laptop and used a Linux-based OS. He was going through an EIA report and checking the location of a project on Google Earth. He had a unique style of engaging with people by keeping the atmosphere light even during serious conversations.

I travelled with him several times to Uttarakhand and was exposed to different layers of his personality. He was a great leader with a great fan following and would always travel by bus and walk kilometres to reach remote villages. He wouldn’t let people know in advance about his visit. He would only let the families know of his arrival half an hour before reaching the village.

Within a couple of hours, that house would soon transform into an office and for the next two days people would come to meet him with their respective documents. Each of them would discuss and update him about the information they received from Right to Information queries.

Matu Jansangathan never had a physical office, it didn’t have any paid staff nor any philanthropist backing it, yet it was the biggest office, with branches in hundreds of villages and thousands of staff working in tandem for protecting their soil. He would never accept any gifts or donations. Instead, people would bring home-cooked food and have a detailed discussion on the recipes with him.

Vimal Bhai with a group of villagers in Uttarakhand. Photo: Matu Jansangathan

He would remember each of their names and their relatives and always remembered the last conversations. People who worked with him and stayed with him knew that he was not just an activist, he was a phenomenon! A true Gandhian, who lived like Gandhi and worked like Gandhi.

I had started calling him ‘Guruji’ (spiritual teacher) which initially used to irritate him a lot. One day he smiled and said, ‘Why don’t you call me ‘Mamaji’ (maternal uncle)?’ I had to convince him that I find him as a guru, but he always used to treat me as family and called me ‘Bhanja’ (nephew). I don’t know if he was a dog lover, but he also accepted my dog Gabbar as his ‘Pota’ (grandson) and would always make sure to ask about his well-being and call me occasionally to bring him along whenever long-day conversations were to happen.

It will take decades for social scientists to crack Vimal Bhai’s style of activism. He knew it was a war against a corrupt corporate-political nexus, which could not be fought or sustained with donations or violent protests.

The members of Matu Jansangathan are ordinary people, busy in their day-to-day struggles. Yet it is the largest environmental movement in Uttarakhand. It could only be made possible because of Vimal Bhai, who was an ordinary person, and lived a bare minimal life, abstained from material possessions and completely devoted himself to the upliftment of the poor and worked for the protection of forests and rivers. He also actively participated in the movement for LGBTQ rights.

Though he used to travel a lot, his favourite place was his residence in Faridabad which is a reflection of his personality. He was a great artist, poet, cook and moreover a welcoming host who loved to serve people with his great recipes and jokes. In the last few years, he became popular as ‘Vimal Kaka’ and dedicated his time supporting the displaced people of Khori village and fighting a legal battle for their rehabilitation. During his last hours at AIIMS, he was taken care of by people of Khori village and his close associates.

Debadityo Sinha is an activist working on conservation policies.