Cyclone Gaja is expected to make landfall between Pamban and Cuddalore, around Nagapattinam district just before midnight on November 15.

New Delhi: Large swathes of South India are bracing for the impact of Cyclone Gaja, which is expected to make landfall on Thursday at around midnight. Tamil Nadu, parts of Andhra Pradesh and Puducherry are likely to be hit the hardest.

The India Meteorological Department (IMD) has issued a red warning – the highest category which denotes “take action”. The IMD has also been posting regular updates on Twitter about the movement of the storm. The cyclonic storm is forecasted to decrease in intensity and make landfall between the towns of Cuddalore and Pamban with wind speeds of 80-90 km/hr. Post the landfall, it will retain its cyclonic characteristics and will have wind speeds of up to 70 km/hr on land for six hours.

According to Eric Leister, senior meteorologist at the weather forecasting service AccuWeather, the impact will range from “flooding rainfall and mudslides to damaging winds”. All cyclones begin as low pressure areas over the ocean surface and then intensify into depressions, deep depressions, cyclones, severe cyclones and very severe cyclones based on their wind speeds. 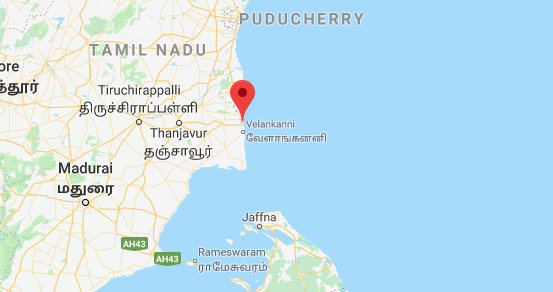 Tamil Nadu electricity minister P. Thangamani has also announced that power supply will be cut off in the evening in the districts that fall in the path of the cyclonic storm.

S. Balachandran, regional director, IMD, said, “With increasing velocity of the wind speed, it will intensify further into a severe cyclonic storm in the next 24 hours and move west-south-westwards. The cyclone is likely to weaken on November 15 while making the landfall.” A fisherman parks his boat at a harbour as a precautionary measure ahead of Cyclone Gaja, Chennai, November 14, 2018. Credit: PTI

“Eight National Disaster Response Force (NDRF) teams and seven squads of the state disaster response force have been dispatched to Nagapattinam, Cuddalore, Thanjavur, Pudukkottai, Ramanathapuram and Tuticorin districts. Besides setting up a 24-hour control room in Chennai, we have directed the district collectors to form rescue teams. Cyclone management committees have been formed in all the 2,559 vulnerable places. 410 zonal teams are also in place. Further, 22,495 people are ready to engage in rescue works,” Udhayakumar said.

Fishermen have also been warned not to go out to sea, especially considering how hundreds went missing when Cyclone Okchi hit the country’s southern coast in November 2017 when they were caught completely off guard. The IMD was criticised for not providing enough advance warning, which led to many fishermen heading out on the day of the storm.

Frustrated fishermen took over the rescue operations themselves due to the lack of urgency and desperation on the part of the state and central government. In two such pursuits, residents of Vallavilai spent Rs 32 lakh on rescue operations and rescued 35 fishermen.

The areas that are likely to be most severely hit are no stranger to cyclonic adversity. In all, at least 365 people were killed in the wake of Cyclone Ockhi, which wreaked havoc in the southern coastal districts of Kerala and Tamil Nadu.

“Usually, such cyclones are formed when remnants of typhoons from the Pacific Ocean come into the Indian Ocean or the Bay of Bengal and re-intensify into cyclones when they find warm ocean waters in these regions. The track of the cyclone is also usually directed towards North Tamil Nadu in the initial stages”, P. Mukhopadhyay, a senior scientist at the Indian Institute of Tropical Meteorology, Pune told Down to Earth.

The Indian Navy was Wednesday put on high alert, officials said. Navy officials said the Eastern Naval Command (ENC) has assumed a high degree of readiness to render necessary humanitarian assistance as the cyclone is poised to cross the coast of the two states on Thursday evening.

“Two Indian Naval ships – Ranvir and Khanjar – are standing by to proceed to the most affected areas to undertake humanitarian aid and distress relief,” said a Navy official.

He said these ships will have additional divers, doctors, inflatable rubber boats, integral helicopters and relief material on board.

The official said helicopters, Dornier aircraft and one P8I aircraft are on standby to undertake reconnaissance, rescue and casualty evacuation.