Professor G.D. Agarwal's Contributions to the Ganga Cause Were Unparalleled

G.D. Agarwal's died as he lived – with a commitment to rejuvenate the Ganga. 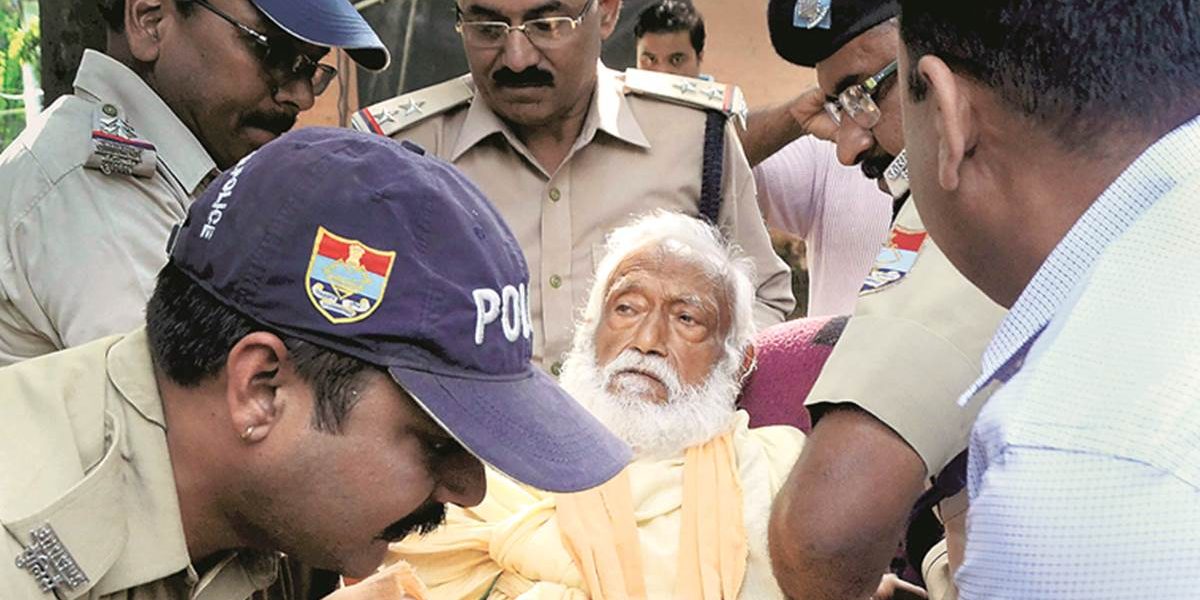 G.D. Agarwal was forcefully taken to a hospital on October 10.

Professor G.D. Agarwal’s death on Thursday, while he was on a fast unto death for the cause of a rejuvenated Ganga river is deeply distressing and disturbing. He was on a fast since since June 22.

Agarwal, also known as Swami Gyan Swaroop Sanand, was a simple, soft-spoken man who had amazing inner strength and commitment to the cause of river Ganga. He was on a fast for the cause of Ganga at least five times earlier, in 2008, 2009, 2010, 2012 and in 2013, all during the UPA government’s regime. Following these fasts, the government agreed to scrap a number of hydropower projects along Bhagirathi river and also declared about 135 km of the riverfront from Gaumukh to Uttarkashi as an eco-sensitive zone. In a letter written to Agarwal on August 23, 2010, then finance minister Pranab Mukherjee promised these actions.

Also Read: Ignored by the Govt, Environmentalist G.D. Agarwal Dies While on Fast to Save the Ganga

Elaborating on the reasons, he stated, “We have come to this decision keeping in mind the very special features and unique status of the sacred Ganga in our culture and in our daily lives. The holy Ganga is the very foundation and is at the very core of our civilization.”

Agarwal was earlier teaching at the Indian Institute of Technology in Kanpur. He was also a former member secretary of the Central Pollution Control Board. People who interacted with him during those years speak highly of his work even now.

Before beginning his last fast, Agarwal wrote to Prime Minister Narendra Modi on February 24. He announced his plan to begin a fast-unto-death from June 22 and what his demands were. He said that considering Modi had said before the 2014 elections that he is a son of Ganga, he had hoped his government would do something effective to rejuvenate the river. He was clearly disappointed. An uncharacteristically angry Agarwal wrote that the Modi government, instead of working to rejuvenate the river, was busy either creating waterways, dredging indiscriminately, diverting more water or building more projects.

Among his demands were

Giving the government time until June 22 – the Ganga avataran divas (Ganga birth day), Agarwal said he would fast-unto-death if the demands were not met. An anguished Agarwal said he was determined to lay down his life for Ganga as “nothing can be more important than the cause of the river”.

Also Read: Can Gadkari Clean up the Ganga by 2018?

Agarwal received no response from the government, so on June 13, he wrote another letter to Modi. In this letter, written form Matri Sadan in Haridwar, he reiterated his demands and elaborated that all under construction and planned hydropower projects on Alaknanda, Mandakini, Dhauliganga, Nandakini and Pinderganga be stopped. He also added that all sand mining from the banks of Ganga, particularly near Haridwar be stopped.

This letter also did not get any response. A day after beginning his fast, Agarwal wrote a brief third letter to the PM, saying that he has started his fast-unto-death since no action had been taken by his government.

In a letter to PM Modi, Agarwal addressed him as a “younger brother”. Credit: PTI

No response from the government

On August 3, Union minister Uma Bharti met Agarwal without any specific response towards his demands. In response, Agarwal wrote another letter to the Modi. In this letter, he said

It is on the basis of my experiences gained over all these years of being part of these institutions, I can state that in the previous four years of your government, there is not even a single action that can be said to be a fruitful one in the direction of saving Gangaji. It is my request, I repeat, that the following necessary actions be accepted and acted on. I am sending this letter through Uma Bhartiji.

When the government still did not move on his demands, Agarwal decided on October 9 that he would stop taking water too and conveyed the same to the government. The only response from the government was to forcibly take him to All India Institute of Medical Sciences at Rishikesh on October 10, something it had done in July also, releasing him a day later.

Some of us did not always share his perspective of rejuvenating just the Ganga (we want all rivers to be treated the same way) and that too only on spiritual-religious grounds (we emphasised a social-environmental-cultural perspective). Many of us possibly regret not being able to stand with him as much as we should have.

While releasing the notification for environment flows in upper Ganga basin upto Unnao on October 9, Union water resources, river development and Ganga rejuvenation minister Nitin Gadkari appealed to Agarwal end his fast. But this was just too little, too late, unscientific and retrograde proposal. It was an insincere tokenism that Agarwal rightly rejected.

As people remember Gandhi’s 150th birth anniversary, the Gandhian struggle that this Ganga crusader deployed throughout should be noted. The contemptuous and arrogant way the government treated this struggle only exposes how little respect it has for Gandhi and his ideals.

People who feel are passionate about saving rivers and have been fighting for the cause and also those who worship the rivers will not forget this sacrifice. Professor Agarwal made unparalleled contribution both in life and death to save the Ganga. Salutes.

Himanshu Thakkar leads SANDRP. He can be reached at ht.sandrp@gmail.com.