Politics Over Narmada, Once Again

For those who have fought over the years, it is not just about the dam, but about the violence and the injustice, and the development paradigm debate – development for whom and at what cost – that makes the issue valid even today. 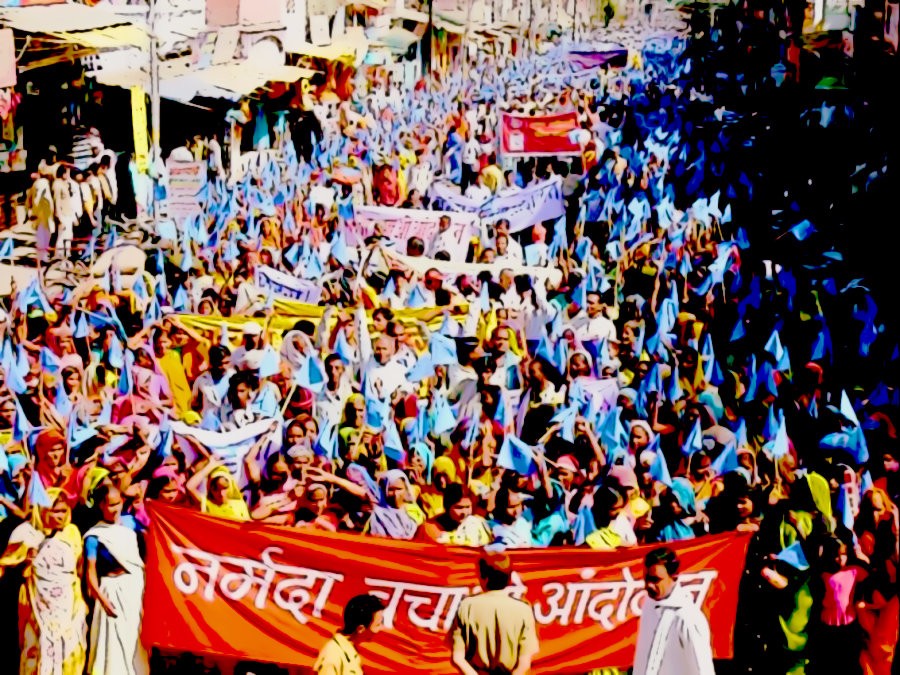 On June 6, in the largest village of Nisarpur, which is facing submergence, a crowd of 7,000 people, largely women, renewed their pledge to neither move out nor permit forcible eviction by the state without complete resettlement and rehabilitation. Such determination is shown by Devram Kanera, an activist with the Narmada Bachao Andolan for last 32 years, but also by Pemal Bai, a woman agricultural labourer, who openly challenges the Madhya Pradesh and Gujarat government’s claims to give them a better life to replace their current environs and culture.

It is no one’s contention that the government will not be able to compensate for the loss of a way of life attached to the river Narmada, and the green cover and fertile black soil of Nimar sustaining the livelihoods of millions. The fact remains that the 40,000 families spread over the 214-kms submergence zone are facing state violence, just as police firing killed eight farmers in Mandsaur over last the few days. The only difference – it is a slow death, living in constant fear of being submerged and evicted. They have put their lives on hold for years now.

That’s the situation we are in today. The resettlement sites remain incomplete, while those completed on paper lack even the most basic amenities like water, electricity and sewage lines. There is no official clarity on the number of affected families since their numbers keep varying. In their most recent notification, dated May 25, 18,346 families have to vacate their homes and land. However, it needs to be noted that 15,496 families were declared unaffected way back in 2015, based on the back water level calculations done by a technical committee constituted by Narmada Control Authority (NCA).

The calculation done by the NCA was in complete violation of the calculations done by the agency responsible Central Water Commission in 1979, as per the Narmada Water Dispute Tribunal. In addition, they also left out a large number of families saying they were temporarily affected and hence had no claim to R&R. This is a game of numbers that the NCA and the Narmada Valley Development Authority are used to playing, and this is something that the Supreme Court recorded in its 2005 judgement.

Our learning from our experience of 32 years of struggle from the local courts to the highest court of the land, and from interactions with several governments in Madhya Pradesh, Gujarat, Maharashtra and at the Centre, is that whenever the authorities have shown political will, progress has been made towards the welfare of the affected families. But such moments have been rare.

Most times, politics was played with the lives of people, most visible when the ‘rally for the valley’ was stopped from entering Gujarat. The rally, which started on June 5, saw the participation of a few hundred supporters, senior activists, environmentalists, scientists, student volunteers and others. It ended with hundreds of them forming a human wall to assert the rights of the people and of the river Narmada.

The incident at the Gujarat border and the statement of the deputy chief minister only reminded us of the old days, when we faced unprecedented police brutality and hostility, and a politically motivated campaign by the parties in power. Unfortunately for them, the reality is very different today. The Narmada Bachao Andolan now has the support of Gujaratis, as a large number of people from Gujarat were part of the rally.

Our every prediction, from water utilisation and costs to the dam to its intended benefits, have come true. The canal network in Gujarat remains at less than 50%. Water meant for Kutch has been diverted to the Sabarmati river front and other cities; water has been snatched from farmers and given to the automobile industry, coca cola distilleries and other factories. The project affected families resettled in Gujarat have been out on the streets for the last one year demanding basic facilities at the rehabilitation sites.

Today, Gujarat has become a garrison state, with activists regularly being detained for 24 hours, before protests take place. This is what happened on June 7 when at the Kevadia colony, the oustees who wanted to meet us, had planned a public meeting. Till today, Lakhan Musafir, an activist with Paryavaran Suraksha Samiti, remains illegally confined in Rajpipla sub-jail. He was picked up on June 6. This is an experience that has been shared widely by farmers and workers fighting state oppression in Gujarat – be it Mithi Virdi against the nuclear plant; or farmers opposing land grab in Dholera, or for special investment regions and industrial corridors; or Jignesh Mevani demanding land rights for Dalits.

As the elections approach in Madhya Pradesh and Gujarat, politics over the dam is going to get murkier. Today, our only demand is complete resettlement and rehabilitation for the people affected by the dam, but this is being hyped up as impacting the interests of Gujarat and its people.

The fact is, the government of the day is hurting the interests of the people, since it is a government that only cares for the interests of the Ambanis and Adanis. Its only interest is grabbing power at any cost, otherwise what justifies sanctioning Rs 3,000 crore for a Sardar Patel statue next to the dam site, violating environmental and other guidelines. The amount is nearly equal to what is required for the effective resettlement and rehabilitation of all people affected by the dam.

We can only infer that the completion of the Sardar Sarovar dam and the statue of Sardar Sarovar portray the fulfilling of Prime Minister Narendra Modi’s dream, just before the Gujarat elections. So the elections can be fought over the grand achievement exhibited by the completion of the 38-year-old damn project, once the gates are closed and the dam reaches its full height of 138.68 metres.

For those of us who have fought over the years, it is not just about the dam, but about the violence and injustice, and the development paradigm debate, that makes the issue valid even today, when we face climate and civilisational crises. Development for whom? At what cost? And how?

Unless all of us rise above politics, the poorest of the poor will continue to remain outside the ambit of the fruits of development. Our struggle continues in a non-violent, democratic way – for justice, peace and freedom.

Medha Patkar is with the Narmada Bachao Andolan and the National Alliance of People’s Movements.