A Brief History of Earth: The Time Our Planet Brought Hell Down Upon Its Life

The Permian-Triassic extinction event rendered Earth so barren in 50,000 years that life took over 10 million years to recover its former glory. 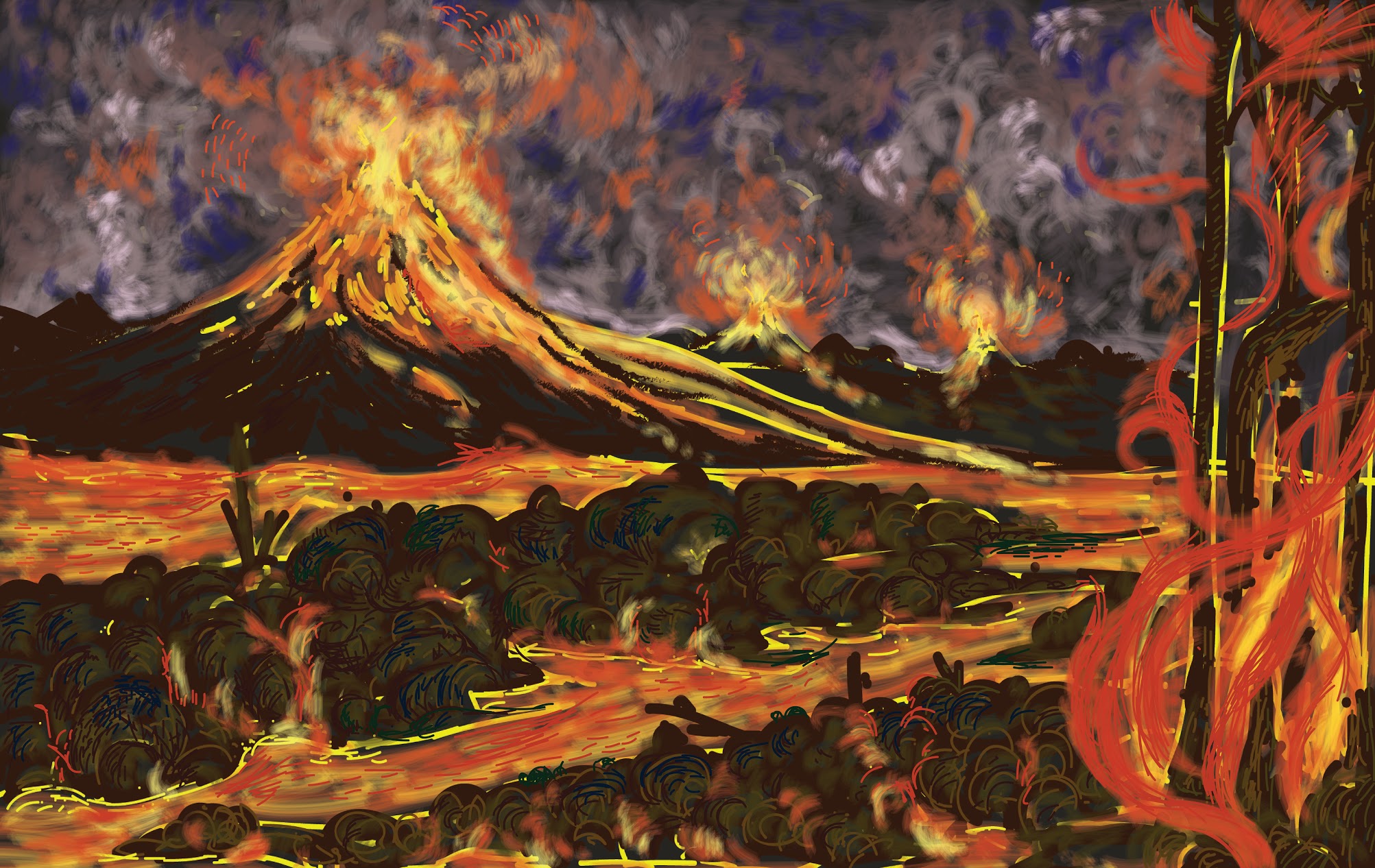 Until now: Continents on Earth had rearranged themselves to clump together and form a giant supercontinent called Pangea, which straddled the equator. After two mass extinctions, trees started developing on land and insects dominated among lifeforms. The fourth of the big five ice ages had set in and Earth’s volcanoes were slowly stirring again.

People often like to repeat a biology tidbit: cockroaches can survive atomic bombs. It is true, of course, and points to the extreme resilience that insects have. Insects survive most disasters the world has seen through history, as well as most extinction events. This is due to two reasons. Insects overwhelm the world just by their sheer numbers. They make up over 80% of living beings on the planet. Every second multicellular organism is an insect. There are over 900,000 named insect species, and it is estimated that there are more unnamed/undiscovered insect types than named. The total number of insect species is estimated to be a whopping 30 million.

To compare, there is only one species of human. All the different 350-odd breeds of domesticated dogs constitute one species as well. And including the domesticated dogs, the canid family has 34 species (wolf, dog, jackal, fox, etc.). There are a total of 36 species in the feline family (cats, lions, tigers, leopards, etc.), 86 species of cetaceans (whales, dolphins, porpoises), about 10,000 species of birds and a 100,000 species of trees in the world. Even the most conservative of entomologists would put down the number of insect species at at least two million. Just the number of species of ants is 14,000.

And if there are two million types of insects, the actual number of individuals is incomprehensible. There are at least 10 quintillion (10,000,000,000,000,000,000) individual insects alive today. That’s 200 million insects to every human. Insects also weigh the most among all terrestrial creatures. The biomass of humans is estimated to be 105 billion tonnes – the biomass of ants alone is 100 billion tonnes. It’s obvious how insects manage to survive almost every natural disaster the world has seen.

Insects also have various adaptations they’ve undergone since time immemorial for survival. From near-perfect camouflage to the ability to fly, walk and swim, and to moult regularly to shed damaged cells, insects have ensured they live no matter what. Of the twenty four extinction events Earth has seen so far, insects have managed to survive nearly every single one of them. In fact, a family of beetles that include weevils and lady bugs has never gone extinct in all of history. There was only one extinction event that managed to nearly wipe out insects, the Permian Triassic (P-Tr). It was the deadliest extinction the world has ever played host to, and its effect on insects is a testament to the magnitude of just how severe it was.

The death is quantified, of course. Scientists today believe Earth lost a tragic 95% of all species on its face. A staggering 70% of all terrestrial species and over 96% of all marine species disappeared forever.

Mass extinctions never arrive as an isolated event that kills off life (except for one instance that we’ll discuss later). A mass extinction period starts to make sense only when viewed in geological time. Extinction events typically last at least 10,000 years and can go on for a million years. This is true even for catastrophic events. They also occur in spikes over a short period of time. The P-Tr event occurred approximately 250 million years ago (mya) over a period of 50,000 years, and likely occurred as three sharp spikes.

Just before the extinction event (needless to say by now) was an ice age called the Karoo glaciation event. This was the fourth of the big five ice ages. As Laurasia and Gondwana came together to form the last known supercontinent, Pangea, they closed off big oceans and hampered the flow of warm ocean currents. And from the Carboniferous period, there were unnaturally large forests spreading across landmasses and pumping the atmosphere with a surplus of oxygen. This precipitated a drop in carbon dioxide levels and led to the planet cooling further.

Growing ice sheets add to positive feedback loops. As Earth became covered in ice, it literally had more white surface. The reflectivity of a celestial body is called its albedo. A darker body has a lower albedo and a lighter body has a higher albedo. And as Earth’s albedo increased because of its increasingly whitening surface, it reflected more sunlight and decreased the amount of heat absorbed with each passing year. Ultimately, the cool and oxygen-saturated atmosphere was ripe for enabling fires. Under such conditions, even wet matter burned.

When the Siberian traps, a chain of volcanoes in Siberia, erupted, the flood basalt event covered an area of Pangea twice the size of North America with lava. Since a flood basalt event slowly and continuously coats land and ocean floors with lava, there is a constant release of noxious fumes for a long period of time. The smoke and heavy dust particles released into the air would’ve blocked out sunlight, preventing photosynthesis and pushing down global temperatures, affecting the ocean currents.

At the same time, a lack of photosynthesis would’ve led to the collapse of the entire food chain – as herbivores and then carnivores would’ve starved to death. Further, aerosols in the atmosphere would’ve become scattered over vast areas and then come washing down on Earth as acid rain. Finally, such a potent, recurrent phenomenon would have contributed greatly to killing off all kinds of plants and animals. Where we are. Credit: Ita Mehrotra

Hot, creeping magma could also set things on fire. Just one tree at the edge of a large forest would have had to have been in contact with this liquid fire for the entire forest to come burning down, with the atmospheric oxygen providing all the fuel needed. Uncontrolled, widespread forest fires would then have added even more aerosols to the atmosphere. The cumulative effect would have been to have had entire ecosystems wiped out in a matter of months.

What was unique about the Siberian traps flood basalt event was that, unlike other flood basalt events that just consisted of lava crawling across Earth’s surface over decades, there were a lot of explosive volcanic events called pyroclastic flows. These events expelled rocks, dust and gases with tremendous force, high up into the air. Winds would’ve carried these gases across waters; especially lethal among them was carbon dioxide. Unlike aerosols, carbon dioxide doesn’t really have a mechanism to be drained from the atmosphere in the absence of plants. Thus, the greenhouse effect started taking over, making Earth warmer and warmer.

The warming of a planet contributes to a positive feedback loop that makes the planet even warmer (which is what astronomers think happened to poor Venus). In the polar caps and other areas of permafrost, a lot of methane gas is trapped inside the ice. As the glaciation event came to an end and ice began to thaw, the trapped methane began to be released into the atmosphere. And just like carbon dioxide, methane is a greenhouse gas and contributed to the rising temperatures.

Plants, much like insects though not to the same degree, are quite resistant to extinction events as well. However, the P-Tr event managed to eliminate nearly 50% of all land plants. A lot of pine and conifer type trees were killed off. The depletion of oxygen in the atmosphere as a result of widespread fires as well as a slowdown in the pace of photosynthesis, together with a lack of well-established ocean currents, swiftly sapped the oceans of oxygen. Pangea was surrounded by a gigantic body of water that was rapidly becoming increasingly anoxic, killing marine life by the millions. Trilobites that had survived through two other mass extinctions finally died out.

Oceans absorb both atmospheric oxygen and carbon dioxide. The carbon dioxide absorbed by the oceans reacted with the sea water and produced carbonic acid. This led to a drop in the water-bodies’ pH levels. As a result, marine arthropods with exoskeletons made of calcium suffered the most: the acidic waters removed their ability to create and maintain an exoskeleton. Most of the early jawed fishes and shark ancestors died out as well. The early ancestors of dinosaurs and reptiles barely managed better, suffering massive losses. The direct descendants of lobe-finned fishes that climbed out of the waters were all killed, as were the early mammalian ancestors.

The P-Tr extinction event left Earth so barren that it took over 10 million years for life to recover. Some omnivorous organisms that fed on dead animals did crop up as they tend to after disasters, but the species did not persist and quickly died out themselves. A lot of the survivors also disappeared after the extinction event. At the same time, the ones that survived grew slowly and steadily, and eventually diversified into a lot of animals we know and are familiar with today.

One of the reasons recovery was so difficult was because the global temperatures remained high for several millennia. It has been estimated that the oceans reached temperatures of over 40 ºC. The anoxia in the oceans took a long time to mitigate as well since there weren’t many plants around to produce oxygen.

The new life that fought to survive after the P-Tr event was different from the kind that had become wiped out. Probably the biggest change in marine life was the sudden increase in numbers of free-floating creatures. Although fishes and primitive sharks existed, over three quarters of oceanic life had been wedged to the ocean floor. In the Triassic era, over three quarters of oceanic life was free-floating. On land, tiny lizard-like animals, whose torsos were raised from the ground, began to spread. Lystrosaurus was the most populous of these and, owing to a united landmass, spread rapidly across the supercontinent. In fact, over 95% of all life on land comprised just of the cat-sized lystrosaurus.

Ferns also once again replaced conifers as the dominating flora on land. Among animals, the archosaurs flourished, eventually evolving into birds and crocodiles. The first true mammals appeared. These were called cynodonts, and had important mammalian characteristics: large brains, body hair and and standing upright. The first true dinosaurs also appeared on land, called the theropods. In the oceans, the highly successful ichthyosaurs appeared (you might’ve seen one as the villainous fish named “Cretaceous” in the 2006 film Ice Age: The Meltdown).

But then, Pangea started to break up…

The next instalment of this series will talk about the fourth big extinction event, the rise of flowers and the lives of the dinosaurs.