Music in the Wild: The Rhythm That Palm Cockatoos Beat to Attract a Mate

Occasionally, the parrots mix their soprano vocals with their drumming. Throughout this performance, their naked cheeks blush a deep red. 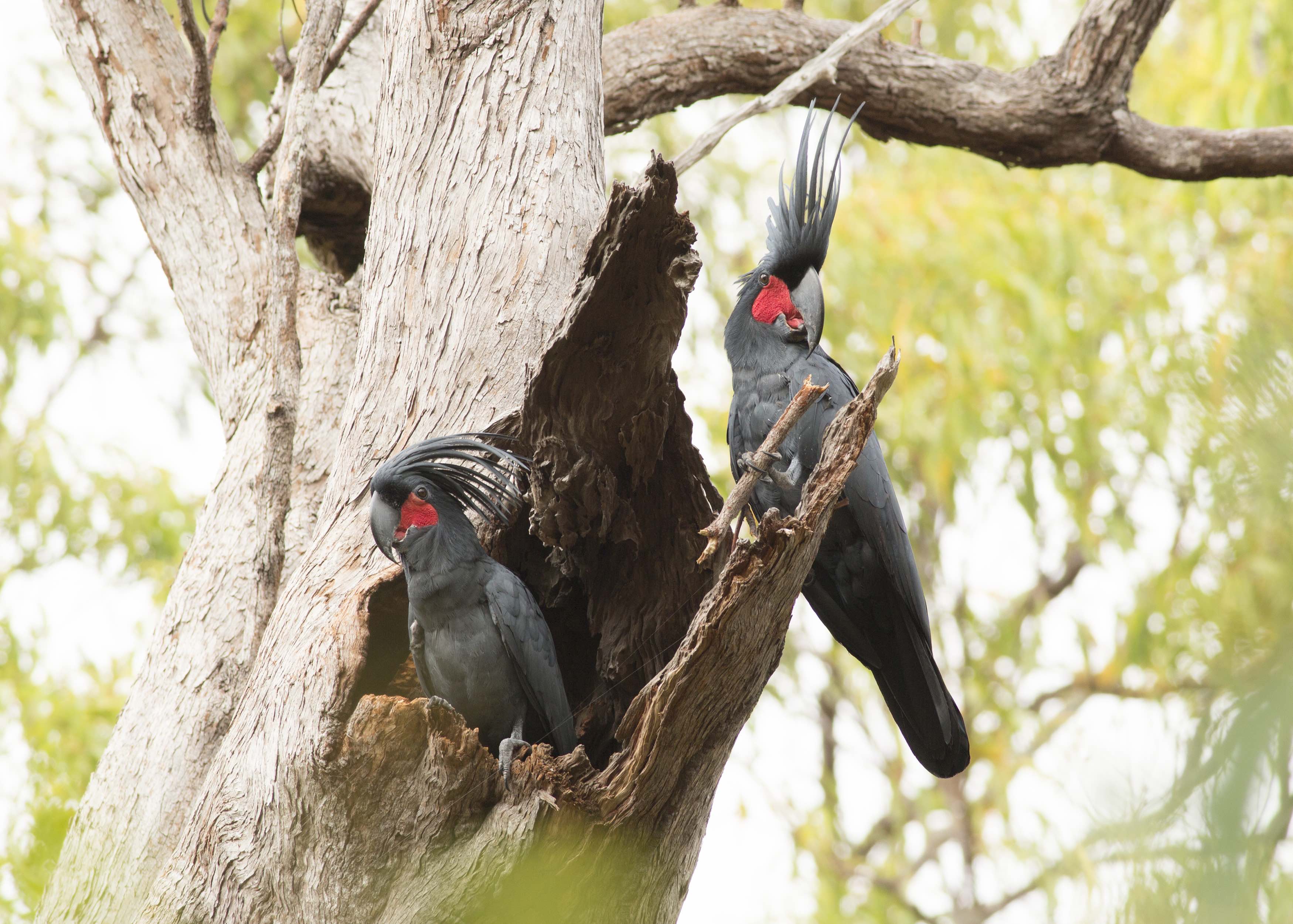 Male palm cockatoos keen to impress their prospective mates use sticks and seed pods to beat a rhythm. They are the only creatures besides humans to combine tool use and musical prowess. Chimpanzees famously use tools to fill their bellies, as does another versatile tool-wielder, the New Caledonian crow. But they don’t fashion tools for any other purpose.

G.A. Wood, about whom little is known, first reported the palm cockatoo’s extraordinary behaviour in 1984. Following the sounds of loud tapping, he observed one of these grey-black parrots holding a fresh green branch in one foot and beating it like a mallet against a dead, hollow eucalyptus tree trunk. On another occasion, he watched one using its large curved bill to break off a twig, strip off the leaves, and trim the ends before striking a tempo. Subsequently, writing in 1988, he says the birds also use the round seed pods of Grevillea glauca, called the Bushman’s clothes peg tree, to pound hollow tree trunks.

Why do palm cockatoos go to such lengths to beat a tattoo? Since they nest in tree hollows and perform on the same trees, were they checking out the durability of nest sites? Were they drawing the attention of females to the location of their nests? Or were they announcing their territories to chase off rivals? Since they couldn’t use their enormous curved beaks to knock as well as woodpeckers can, were they impressing their mates? These questions remained unanswered for more than three decades since Wood’s discovery.

Researchers from three universities in Australia studied the percussive skills of 18 palm cockatoos, also called Goliath cockatoos, at Kutini-Payamu or Iron Range National Park. Christina Zdenek, a Fulbright scholar and now a PhD candidate at the University of Queensland, spent four field seasons of up to six months each camped in this remote area.

“Every single step along the way was a challenge,” Zdenek told The Wire. “Planning, logistics, sorting new field stations nearly every year, finding the birds and not flushing them. Hoisting a 10-metre extension pole vertically in the air in the tropical mid-day humid heat with the sun glaring in my eyes to determine activity levels at tree hollows. Keeping terabytes of footage labelled, organised, and always backed up at least once. Having to sort this daily, otherwise, you’ll get way too far behind. Climbing hollows using the single-rope technique, which was too wobbly for comfort, to measure and inspect hollows.”

While she had volunteer help for some of the time, mostly, she camped alone in open-air, basic living quarters. One year she camped in an abandoned abattoir, and in another, she lived in a two-walled shelter shed. At the end of four years, she had recorded 131 drumming sessions, no small achievement considering the birds’ elusive nature. She recorded one drumming event for every 100 hours.

A fondness for music

Back in the lab, analysis of the recordings showed male palm cockatoos maintain a regular and predictable beat. Each bird prefers a specific rhythm – anywhere from fast allegro to slow lento. Some have more sophisticated tastes, pulling off an accelerando (starting off at a sedate tap before accelerating) or rallentando (slowing down). The birds consistently perform to their preferred beat, raising the possibility that their neighbours may learn to recognise them from their rhythms.

Occasionally, the parrots mix their soprano vocals with their drumming. Throughout this performance, their naked cheeks blush a deep red.

Since their nests are far apart and their tapping doesn’t carry far, they very likely don’t have much of an audience. More often than not, males seem to set up a rhythm for solitary female audiences.

“Male palm cockatoos thus appear to be more like solo musical artists or the beat setters of musical ensembles (for example, drummers in western rock bands) who have their own internalised notion of a regular pulse, and then generate the motor pattern that creates the beat,” write the authors.

If she likes what she hears, the female parrot reveals the spot of colour on her cheeks and brings sticks to the nest. This explains why males take up drumming: to court their mates.

This is the first and only detailed study of this remarkable behaviour.

Palm cockatoos build a cushion of sticks within tree hollows in which to lay a single egg. While carrying nesting material, one may have accidentally knocked on the resonant chamber, attracting female attention. And a culture of drumming was born. Once the male succeeds in his overtures, the drumstick is no longer needed and he puts it to another use. He splinters it with his bill and adds to the nest.

Although the palm cockatoo ranges into the neighbouring island of New Guinea and smaller offshore islands, only the Australian ones in Cape York peninsula are sophisticated drummers. In Papua New Guinea, they don’t make a drumstick but rap with a clenched foot. They usually drum between June and September, but also during the rest of the year. Not all males seem to have a musical bent of mind; some have none at all. For this reason, the researchers suggest playing percussion may be a cultural trait.

Since only males appear to pick up drumsticks and beat a rhythm, they’d have to learn by watching other males. “Young males sometimes hang around, but only once did I see a young male present at a drumming event,” says Zdenek. “These drumming displays, especially if performed with a hardwood stick on a hardwood, i.e., not live tree bark, can be heard up to 150 metres away.”

In his 1871 treatise The Descent of Man, Darwin suggested that the human proclivity for music and rhythm must predate our evolution. If this were the case, at least some creatures ought to share our innate fondness.

So few animals are able to maintain a beat that Professor Aniruddh Patel of Tufts University wrote a paper titled ‘The Evolutionary Biology of Musical Rhythm: Was Darwin Wrong?’. Not surprisingly, in 2014, he found only two captive animals that could keep time to a beat. Snowball, an Eleonora cockatoo, became an internet sensation for dancing to rhythm.

And Ronan, a California sea lion, can bob its head to music.

More than these few extraordinary individuals, here is a whole population of wild palm cockatoos that fashions instruments to a design and beats a tattoo. However, female parrots don’t bob in time to their mates’ beat.

Percussion by palm cockatoos resembles music produced by people: it has a regular beat with the repetition of some bars. But bird beats differ from human-produced rhythm in some ways. In human societies, the social setting, percussion, and dance are a package deal. But the parrots rap alone and don’t dance.

“Tool-assisted displays of drumming palmies [cockatoos] have key hallmarks of human music,” says Zdenek. “This suggests the distinct possibility that preference for a regular beat in human societies had other origins before being co-opted into group-based music and dance, as we see in human societies across the world today.”

Despite these differences, the authors say the similarities suggest an evolutionary link as Darwin predicted.

Carel J. ten Cate, a professor of animal behaviour at Leiden University, The Netherlands, begs to differ. “This hypothesis ignores observations of chimpanzee and bonobo drumming. They [nonhuman primates] may do so in a social context, but also more by themselves. They don’t use an instrument, that is true, but several of their drumming performances are also characterised by regularity. In several cases, [their rhythm is] quite a bit more regular than cockatoos. I would consider these primate behaviours more insightful for the evolution of human drumming than that of the cockatoos. Nothing wrong in comparing the cockatoo drumming with human drumming, and it is certainly an exceptional behaviour. But I would not claim it is such an important contribution to understanding human drumming.” ten Cate wasn’t involved with the study.

Many features of palm cockatoos’ drumming behaviour remain to be researched. How do young males learn to beat a rhythm? Do their styles change over time? Do drummers have better success at reproduction than non-musically inclined cockatoos?

The study was published in the journal Science Advances on June 28, 2017.