The Public Works Department, which is building the road, says it could be ‘submersible’ to keep it from being damaged during floods. 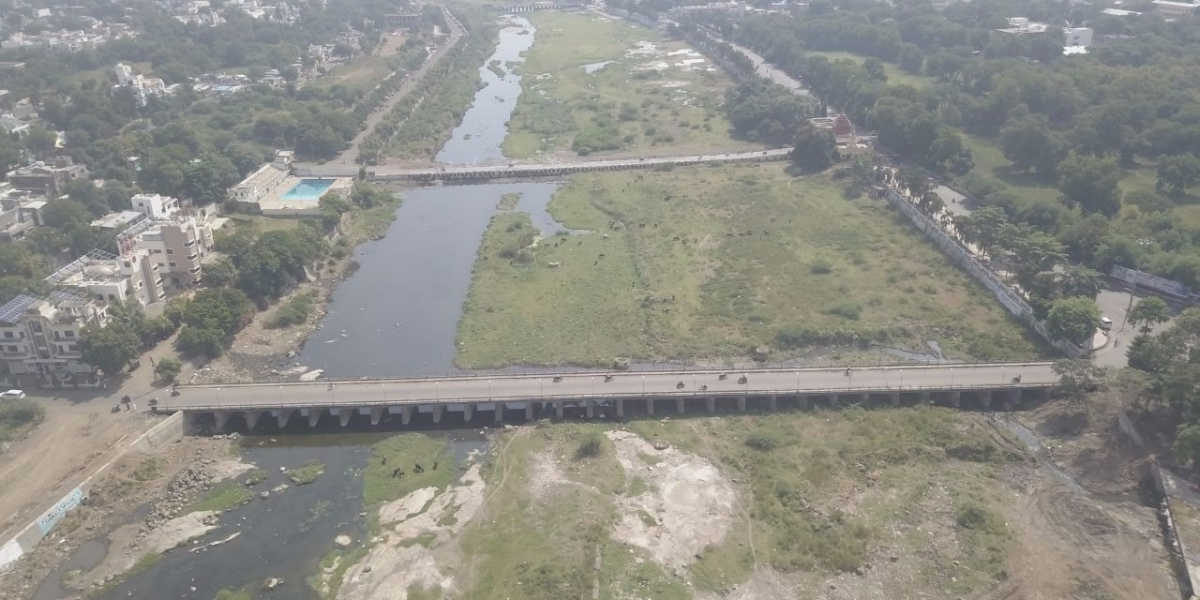 A bird's eye view of the area in which the PWD will be building the 'submersible' road. Credit: PWD

On November 19, 2018, the National Green Tribunal (NGT) rejected an application seeking an injunction against the construction of a road in a floodplains.

The application had been made by Narendra G. Pardeshi, a municipal corporator in Dhule, Maharashtra. He had approached the tribunal alleging that the 11-km-long, 15-m-wide road, split on either side of the Panzara river, was being built illegally. The builder in question was the Public Works Department (PWD).

According to Pardeshi, building such a road on the floodplains “requires a no-objection certificate from the Dhule Municipal Corporation” because they’re in the municipality’s jurisdiction. The state irrigation department also has to okay it.

However, the PWD has obtained none of these clearances “and the construction is underway,” Pardeshi alleged. His lawyer, Sreeja Chakraborty, also said the deputy commissioner of police in Dhule had refused a no-objection certificate to the road projects in March 2017 – as did the irrigation department.

Pardeshi also claimed state authorities had misinformed the tribunal that ‘existing’ roads along the river were simply being upgraded.

But in its order, the NGT dismissed Pardeshi’s complaint and said “the present project will only facilitate the traffic” (sic) and also directed Maharashtra “to develop at least one biodiversity park in the floodplains”.

This surprised river activists and environmentalists.

“Floodplains are a part of the groundwater recharge system. Constructing roads on floodplains means increased risk of flooding and reduced aquifer recharge, which in turn will affect river flow during the lean season,” Manoj Misra, an ex-officer of the Indian Forest Service and convenor of Yamuna Jiye Abhiyan, an NGO, said. “The floodplains of rivers have their own biodiversity and there is no need for a human-made biodiversity park on it. All we need is protection of the existing floodplains.”

The PWD conceded that some roads along the river were being fixed – but also claimed it was only “protecting” the river by building the new road.

“We have removed encroachments such as hutments, burial ground and religious structures from the floodplains to construct the roads,” Aejaz Shah, an engineer with the PWD, told The Wire.

“We will build submersible roads which won’t be damaged when the river floods. A retaining wall along the river and the road together will put an end to any further encroachments on the floodplains,” he added. 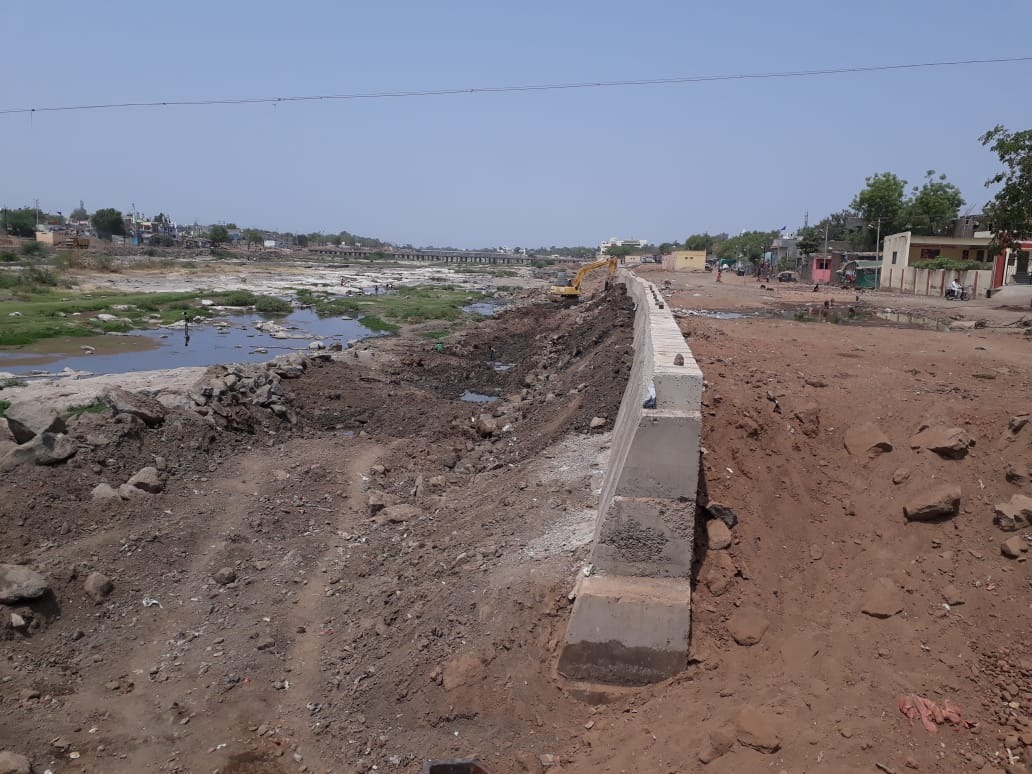 The PWD has also proposed building a barrage-cum-bridge on the river, within Dhule city limits.

In October 2016, according to Pardeshi, the Dhule Municipal Corporation received a note from the Town Planning Department saying Rs 30 crore had been sanctioned to build roads on both sides of the Panzara. Shortly after, earthmovers showed up to level the floodplains.

“I shot off letters to the collector and other concerned officials, informing them about illegal construction on the floodplains, but no action was taken and the work continued,” Pardeshi said.

According Chakraborty, the National Water Policy 2012 and Section 24 of the the Water (Prevention and Control of Pollution) Act 1974 both prohibit impediments to a river’s flow. Additionally, an NGT order in 2014 (Sarang Yadwadkar v. State of Maharashtra, appeal 25/2014) disallowed any construction within 50 m of the blue lines of rivers. The blue line marks off the river’s highest point of flow in 25 years.

“No construction of any nature is allowed inside the blue lines. Even the irrigation department cannot allow it,” Chakraborty said.

She believes the PWD is simply hiding behind a glitch: the blue line of the Panzara hasn’t been demarcated.

In July 2017, Pardeshi approached the Aurangabad bench of the Bombay high court to stop the project. But he soon reconsidered, withdrew his petition from the high court and approach the NGT, which deals with all environment issues.

The tribunal heard the matter but reserved judgment in March 2018 for the summer holidays. When it reopened, the judge on the case had changed and his successor wanted to rehear it. And the successor “dismissed the petition in November without discussing the merits of the case,” Chakraborty said.

And in its dismissal, the NGT quoted the Maharashtra government’s reply on April 9, 2018: “… the road in question already exists except for one or two small stretches. … The present activities are of upgrading and strengthening the existing construction, after reviewing encroachments.”

It has also quoted the State Pollution Control Board’s reply: that “Section 24 of the Water (Prevention and Control of Pollution) Act 1974 does not apply as the construction is to improve the existing roads and is not a new construction”.

Ravinder Jadhav, the deputy commissioner of Dhule, told The Wire, “Some roads already existed along the Panzara river and some were being newly constructed under the project.”

When asked about the lack of clearances, he said, “This project is being promoted and implemented by the state government and a state government agency in the public interest. Why ask about a no-objection certificate when the government is doing the project in the people’s interest?” Some of the ‘encroachments’ the PWD claims it will remove during the project. Credit: PWD

Shah, the PWD engineer, alleges Pardeshi’s petition was politically motivated. (Pardeshi had been a corporator for 15 years.)

“There are already eight bridges on the Panzara river that connect both parts of Dhule city,” he continued. “We are upgrading some small roads and creating some new roads.” He also claimed the PWD will plant 7,000 trees along the roads – of which over 3,000 trees, brought in from Andhra Pradesh, have already been planted.

According to Chakraborty, however, this is a straightforward case of encroachment because the clearances – setting aside the question of whether the government is really doing this for the people – just don’t exist. They also directly the law.

“In its March 2018 reply, the state water resources department informed the court that demarcating flood-lines” was an arduous task and “would require at least six months” just for the Panzara, she said. “This hasn’t been done.”

“Infrastructure projects such as retaining walls along the river and concrete roads sever rivers from their floodplains and stop rivers from performing their natural functions,” Misra said. Such misplaced projects are often a death knell for our water bodies.”

To him, the only thing left to do now was to approach the Supreme Court. In the meantime, Shah said, the Panzara floodplains road project should be completed by May 2019.