Although it’s still unclear how young crows learn to fashion implements, their cleverness and ability to make tools with their beaks continue to astonish. 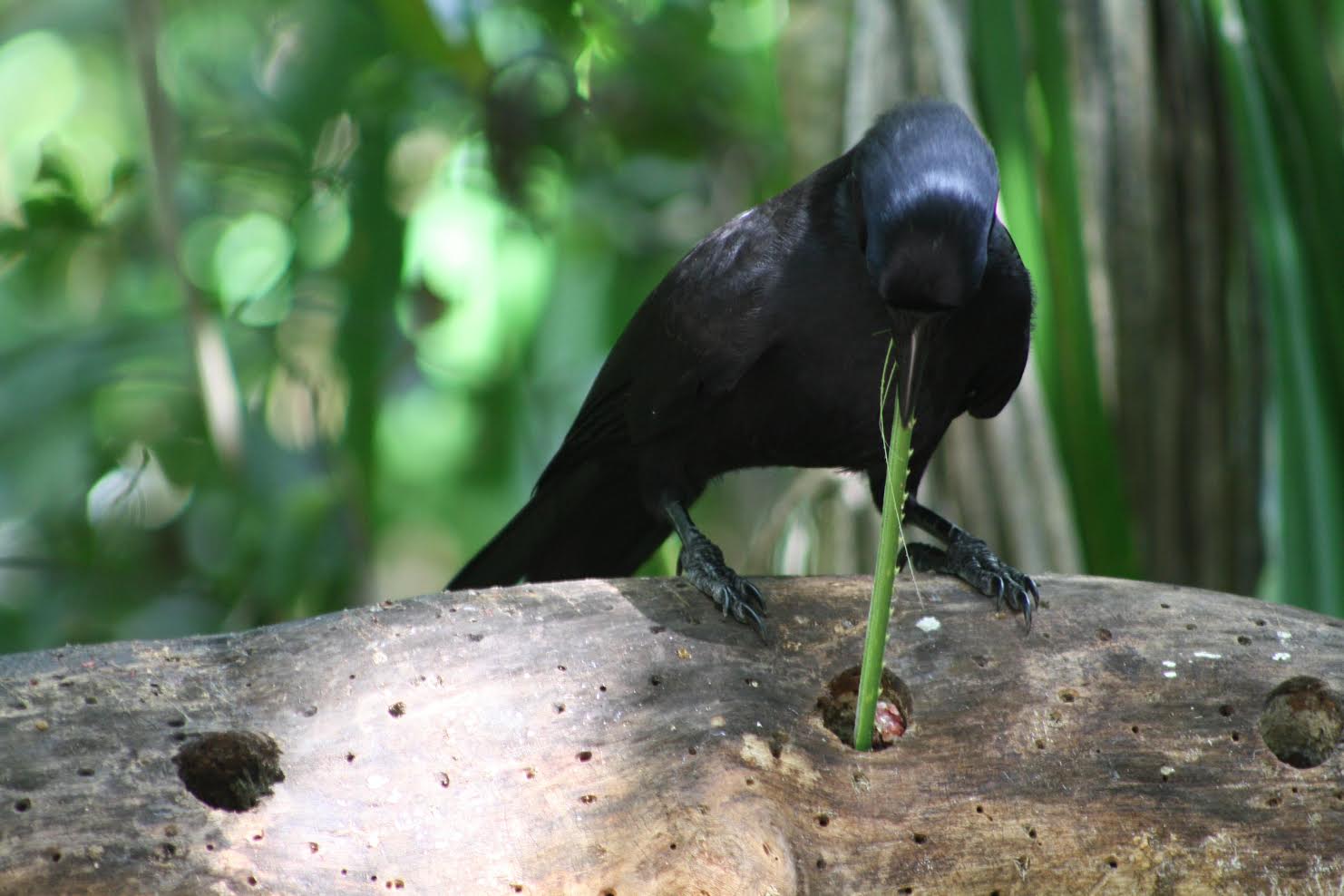 New Caledonian crows are the Thomas Edisons of the animal world. No other animal is more sophisticated at manufacturing tools, except humans. They make implements to poke into rotten logs and extract grubs. They break forked twigs to fashion hooks.

Crows living in parts of the rainforest where pandanus or screw pines grow make tools by ripping the barb-edged, palm-like leaves. They improve upon their design over time, a feat that even great apes such as orang-utans and chimpanzees can’t perform.

Although the crows’ ability to fashion hooks from sticks is nothing to sneer at, their technological advancement with pandanus leaf probes is extraordinary. They make these leaf tools in three shapes – uniformly wide, uniformly narrow, and tapered.

Biologists studying these crows say the tapered design is a refinement of the uniformly wide tool. It is wider at the base, where it’s stiff and easy to grip, while the business end is thin, flexible, and pointed.

Pandanus leaves have parallel fibres and are easy to tear. For the simple broad or narrow implements, the birds cut the leaf with their beaks to the desired width, tear, and make another cut along the margin. They have a strip of fairly sturdy leaf with barbs pointing forward with which to snag grubs.

However, to create the tapered tools, crows cut, rip a little bit, cut a tiny bit more into the leaf, rip, cut into the leaf again, rip, and snip the strip off the leaf. Sometimes, these tools can have four increments, so the tip of the tool is considerably narrower than the base. Throughout New Caledonia, 1,210 km off the east coast of Australia, these tapered tools are more prevalent than the other simpler styles.

How do these crows learn to make their implements? How do they all fashion them to the same standard? Do they copy the actions of others?

Corina Logan, University of California Santa Barbara’s Sage Center for the Study of the Mind, conducted an experiment with wild-caught crows in New Caledonia. Since studying tool-making could complicate the results, she gave them an unfamiliar task that didn’t require tools. She assumed the learning process is the same, whether or not they use tools. She devised a contraption based on one designed by University of Leeds zoologist William Hoppitt, who had conducted a similar study on meerkats. The wooden apparatus had hidden stashes of boiled eggs that could be accessed in four ways: the birds had to push aside a swivelling door, push aside a door and a piece of rubber, lift a wooden flap, or insert their bills through a hole.

Logan then split 14 adult and young wild-caught crows in three groups. She trained one each from two groups in one method of accessing the treat. She told The Wire, “I started out by putting the apparatus on the table with hardboiled egg obviously visible in the food container I wanted them to access. The flap door was taped wide open so they could just walk up and eat the food without having to do anything. The other access points were completely taped shut so they could not learn about them. When they were comfortable, I moved the tape so the door was partially closed, and they would have to push it open a little bit to get the food. Once they could do that, I took the tape off so they had to push the door all the way open to get the food.”

The training was done in isolation so other members of the group couldn’t see. One group had none to teach them what to do.

During the experiment, Logan placed two of these contraptions close together and let the birds have a go. The trained ones obviously knew what to do. When the others saw them find pieces of boiled egg, they were not only attracted to the contraptions, but they focused on the same slot.

They learned where to find food from watching others, but they didn’t imitate or copy the actual trick of getting food. Each learned to access the boiled egg by trial and error.

While learning to make leaf tools, crows don’t start from scratch without a clue. The first implements youngsters use are the ones discarded by their parents.

“In the wild, juveniles live with or near their parents for the first year or so,” Logan explains. “The juveniles see their parents make and use a particular tool shape. And often the parent will leave the tool inside the hole in the log and the juveniles will grab it and start interacting with it.” Crow parents also prod their offspring to use the tools.

By playing with these already fabricated implements, chicks know what the best ones look like. By sheer grunt work, by trying and failing repeatedly, they become proficient in tool use and manufacture over the course of several months.

This is similar to how songbirds learn to sing. When they are young, they memorise the songs of their parents, and they practice until they can sing just as well.

However, Gavin Hunt, University of Auckland, New Zealand, who has studied tool-making New Caledonian crows since the early 2000s, disagrees. “The ability to make a tapered tool may depend not on copying the precise manufacture actions,” says Hunt, “but learning some other information that can only be obtained by observing the manufacture. Handling their parents’ tools provides some information, but I suspect this is not sufficient to successfully replicate their parents’ design.”

In a study published in 2007, Hunt and his colleagues concluded that crows are genetically predisposed to making tools, readily using sticks to spear pieces of meat hidden in logs. While Hunt and other researchers agree that the birds don’t imitate, the process of learning to make tools that conform to a standard is still unclear.

“The current work doesn’t say much about how juvenile New Caledonian crows obtain the knowledge to make and replicate pandanus tool designs,” says Hunt. “There is probably a mix of learning – social and individual – and inherited disposition involved.”

Although it’s still unclear how young crows learn to fashion implements, their cleverness and ability to make tools with their beaks continue to astonish.