Nepal's Flood Recovery Set to Exclude the Most Marginalised

Government aid for flood reconstruction is going to landowners rather than tenant farmers, who often enter verbal contracts and cannot prove their status. 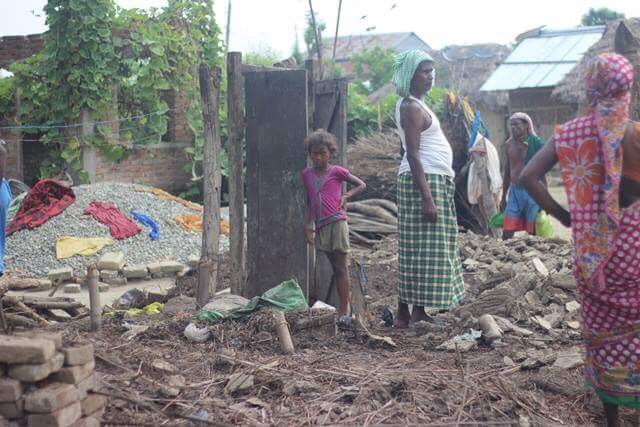 Villagers in Pipara standing at the site where there home used to be. Credit: Vikash Kumar Shah

Pipara (Saptari district, Nepal): Floods in mid August in Nepal killed 160 people, destroyed or partially damaged 2,35,000 homes, wiped out roads and bridges, and left farmers across the country struggling to save inundated crops and repair broken irrigation systems. The flooding was spread across the Terai region – the plains that span from east to west along Nepal’s border with India. Initial estimates of the damage are in the tens of billions of rupees, including 5.84 billion Nepali rupees in the agricultural sector, according to the Ministry of Agricultural Development.

In response to the agricultural crisis, the government announced a record-breaking 1.25-billion-Nepali-rupee ($12.2-million) recovery package for farmers. Unfortunately, this aid is unlikely to reach tenant farmers, who make up roughly a third of all farming households nationwide and are often the most desperate for support.

Radha Devi Sada, 60, and her husband managed to save their most precious belongings – citizenship cards, money and some clothes – before taking shelter at the local health post with their neighbours. But the flood ruined their stores of rice and caused their mud-and-wattle home to collapse.

Sitting under a palm tree near her home’s earthen foundation, Radha explains that she has no sons, so she and her husband farm a small plot of land rented from a landlord who lives in a nearby city. In their neighbours’ households, young men go for seasonal labor in Kashmir in India because there is little employment locally. Radha says that families here were affected by severe flooding in 2008, when a breach of embankments on the nearby Koshi River led to massive inundation in Nepal and Bihar.

A year ago, families in Pipara received small plots of land from the government as part of a programme for landless Dalits.  The plots are large enough for a home, but not for farming.

“We have to work in the fields to feed our children.  But we don’t have our own farmland,” says Gita Devi Sada, 35, another villager, after she finishes a meal of rice, salt and chilli peppers.

Tenant farming in Nepal is common. According to government data, 32% of households practice at least some tenant farming, and 5% rely solely on rented agricultural land.

Many of the households in Pipara face severe losses this agricultural season and will have difficulty paying rent to their landlords.

Although tenants used to pay 50% of the total harvest to their landlords, these days most tenant farmers are under the thekkaa system, whereby a fixed amount is paid to the landlord no matter whether it is a good harvest or a bad one. In Pipara, this is 1,600 kg of rice per Nepali bigha – equivalent to half the crop in a good year (1,600 kg per Nepali bigha equals 2,360 kg per hectare, or about 64,000 Nepal rupees/$625 per hectare at current market prices).

Village residents say that the major landlords in the area do not excuse rents in case of a bad harvest. If rent cannot be paid one year, it must be made up for the next, driving farmers into debt. 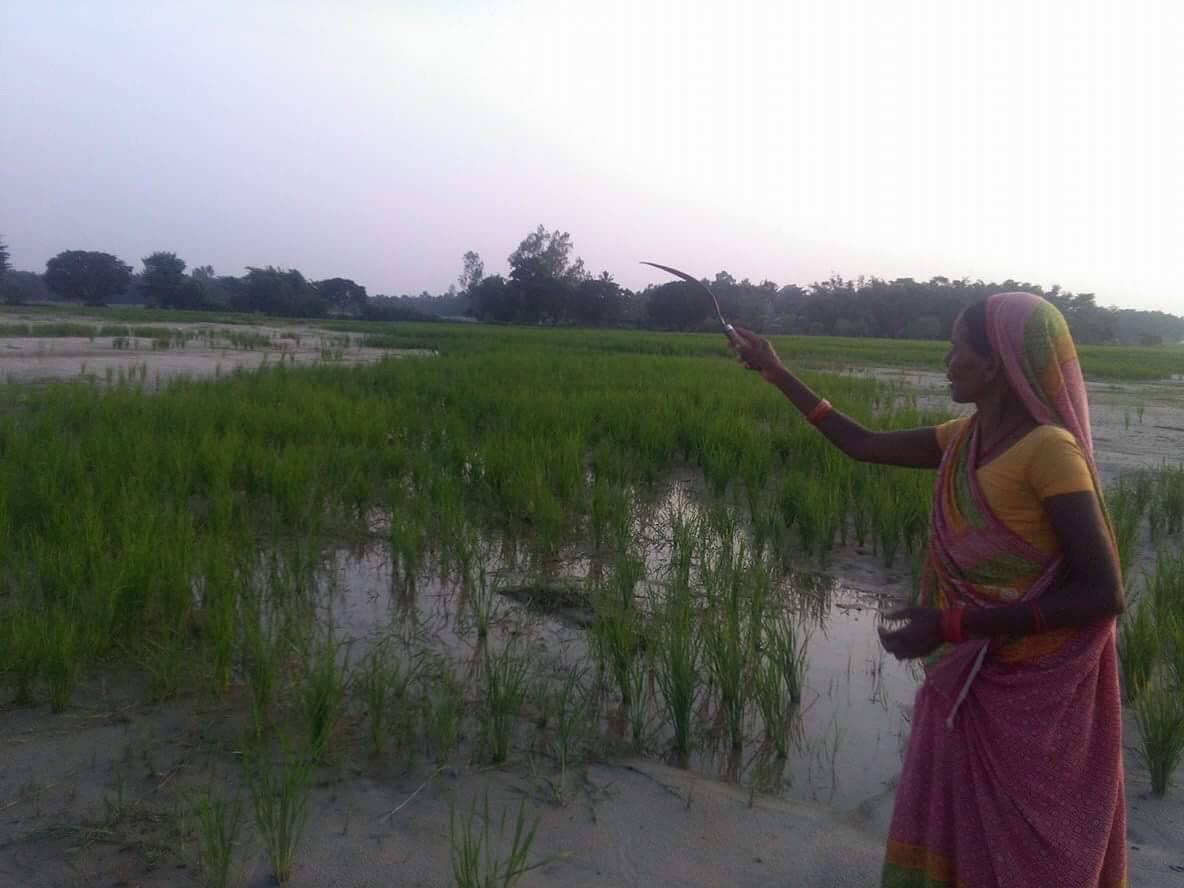 A farmer in Saptari pointing to her flood-damaged land. Credit: Bhola Paswan

In addition to these troubles, Pipara farmers are unlikely to receive aid from the government’s agricultural crop recovery plan because they lack the title to the land they farm.

The government has yet to begin distributing any of the announced aid package at the local level. According to Bhagirath Yadav, a senior agricultural officer, the District Agriculture Development Office has received no instructions from Kathmandu even though thousands of farmers have already submitted applications.

When the aid is distributed, farmers will need to submit documentation in order to be eligible.  “Otherwise, how will we know if the person giving the application is actually the farmer?” Yadav says.

Tenant farmers who can produce a written agreement showing that they are tenants may claim aid, Yadav says. But in Pipara, few residents possess such documentation – rental agreements are almost always verbal, according to multiple villagers.

Some landlords say they will share the government compensation with their tenants. Reached by phone, Shailesh Singh, a local landlord who is also a professor in the district capital, said he had applied for compensation on behalf of his tenants.  When asked if he would give them a discount on this year’s rent, he said he had not decided yet.

Chaturman Tamang, 68, a Pipara resident, says that since tenants often invest in the seeds, irrigation, fertiliser, compost, and labour for farming, the government should support them. “If the government pays the landlord, then the tenants should also get at least half,” he says.

Jagat Deuja, director of the Community Self-Reliance Center, an NGO that advocates for the landless, agrees. He says that in order to ensure that individuals do not abuse the system, the government could require tenants to produce letters of recommendation from their local ward-level representatives, certifying their tenancy. “The larger the role local government has in the process, the more effective it will be,” he says.

In addition, Deuja says the government needs to recognise informal tenancy. Because many landless people are illiterate, they are reluctant to sign written agreements and enter into verbal agreements with landlords.

Another strategy is to provide land to the landless. Such efforts date back at least to the 1950s, when early democratic leaders called for land reforms.The government under King Mahendra carried out a poorly-implemented land reform programme in the 1960s, but land inequality remained high. Maoist rebels called for “land to the tiller” in their insurgency in the late 1990s and early 2000s, but after peace in 2006 political divides shifted to ethnic rather than economic bases; recent tensions over the 2015 constitution have pitted Terai-based Madhesi groups against hill-origin groups. The amount of available land has also decreased as the population has grown. Still, the government has implemented programmes to provide small plots of land to landless Dalits and emancipated kamaiya and kamlari (indentured labourers) in recent years, although the parcels are rarely sufficient to support families. 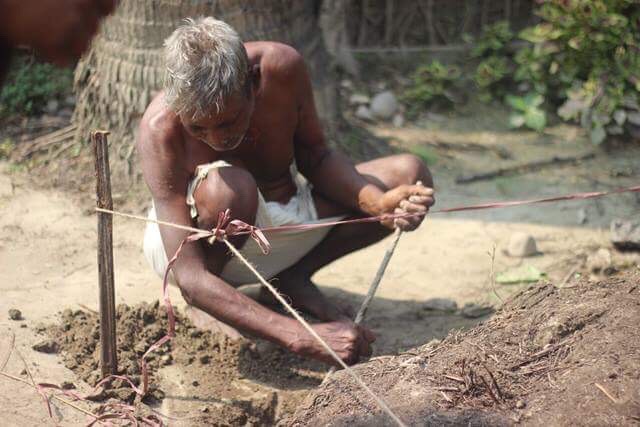 For the time being, few options are available for Pipara residents.

Some have discussed forming a committee to advocate for local tenants, though they have yet to do so. Many villagers are busy in campaigns for upcoming local elections, which will be held in Nepal’s Province 2 on September 18. Villagers can earn small amounts from local politicians by attending their rallies and door-to-door campaigns.

Villagers whose houses were completely destroyed are also eligible for a meagre government relief stipend of 70 Nepali rupees per day for one month, although few are receiving it. Only 258 families in all of Saptari district have signed up for this allowance, according to Bhagirath Pande, Saptari’s chief district officer.

A small campaign spearheaded by Jay Paudyal, a Kathmandu-based journalist who writes the popular blog Stories of Nepal, is rebuilding several houses in Pipara.

Prime Minister Sher Bahadur Deuba’s cabinet has also approved a nationwide plan to provide 25,000 Nepali rupees per house that is completely destroyed, but it has not yet to implemented this policy in Saptari. The amount is far less than compensation for victims of the 2015 earthquakes, who receive 3,00,000 Nepali rupees upon completing house construction. And if earthquake reconstruction is a measure to judge by, rebuilding flood-hit housing will be a long process: only 3,927 of over 5,75,000 households that signed reconstruction agreements with the government have been rebuilt to date, two and a half years after the earthquakes took place.

Peter Gill is an American journalist based in Nepal. He tweets at @pitaarji. Bhola Paswan is a Nepali journalist who focuses on Madhesi and Dalit issues. He writes for Kantipur, Nagarik, and Naya Patrika. He tweets at @paswanbhola.