All embankments along the India-Nepal border are controlled by India, which means that during a cross-border flood, one side will drain itself by drowning the other. 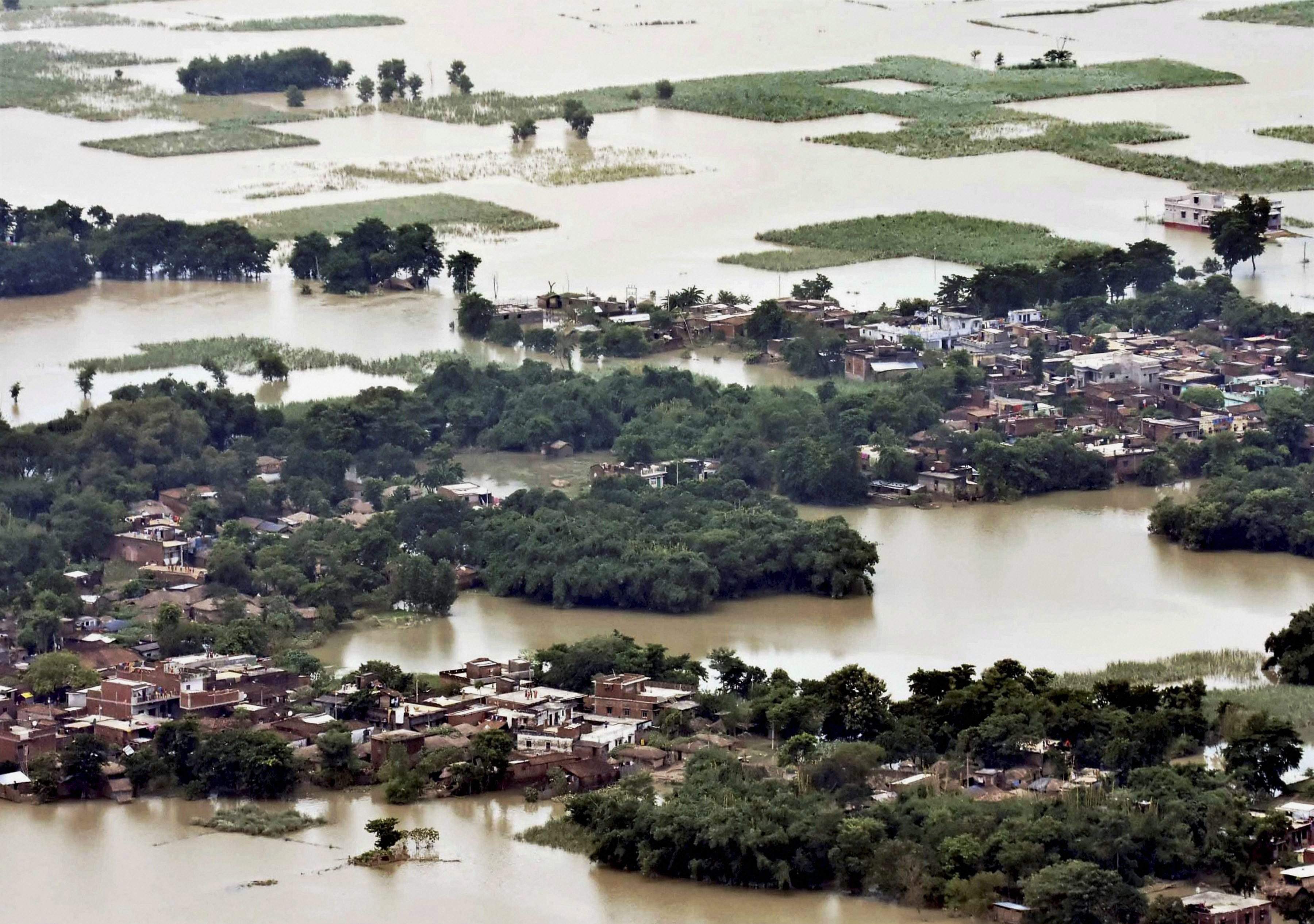 An aerial view of Motihari district, Bihar, during the floods. Credit: PTI

Subina Shrestha is a journalist based in Kathmandu.

Every monsoon the rains unleash landslides in the Himalayan foothills and floods in the plains, sweeping away families in a fury of loose mud and water. The poorest of the poor are always the worst affected. Their earth and bamboo houses are swallowed by the water as the people try to save whatever they can. The roads become a refuge for people and cattle. Blue and orange tarps appear for shelter, rigged to trees and bamboo poles. Slightly putrid rice is dried on the tarmac, along with clothes and mattresses.

Then the wait for relief begins.

Everyone scrambles when it arrives, and there is never enough. A few weeks later, the nation forgets the floods. The wider world never have noticed. The villagers eventually clear the mud from their homes and wipe them clean. Then the men of each family go to find work as labourers in the Gulf. The cycle of poverty and migration keeps the country going.

This year, like Irma and Harvey, and possibly Jose in the United States, South Asia saw unprecedented weather. The clouds over Assam in India and along the foothills of Nepal just stayed put and dumped a record amount of water, day after day. Nepali villagers say that they had never seen such intense and sustained rain. In Nepal, 159 people have died so far. Twenty-eight are still missing. Crops are ruined and a quarter of a million homes damaged or destroyed, according to Nepal’s ministry of home affairs. The water flowed south to Bihar and Bangladesh. A separate weather system has brought disaster to Mumbai. More than 1,200 have died across South Asia in all.

A coincidence of timing makes it seem obvious that these unusually severe weather events are a global phenomenon. For years, we in South Asia have been hearing about how climate change will affect us. Apocalyptic images of people suffering alternate drought and deluge have been etched in our minds. We’ve been made to believe that the global order of rich and poor will remain because poorer countries like ours will be especially cursed by global warming.

“The trend of extreme rainfall is increasing,” says Ajaya Dixit, who heads the Nepal branch of the Institute for Social and Environmental Transition. “Extreme weather is a new norm.” Each year brings a once-in-a-decade, a-once-in-a-century, a once-in-five-hundred-years storm. Human-made changes to weather patterns, mixed with urban development and bad engineering in vulnerable areas, have now left Florida, Texas, Bangladesh and Nepal in the same position.

We’re also seeing that the West can vote for a senator who denies climate change but they can’t deny six feet of standing water in the kitchen. We’re all in the same boat. And we’re also seeing how the politics and planning of this new normal can play out and how climate disasters are a harbinger of social conflict.

In July, people from the village of Tilathi in Saptari district, Nepal, had a feud with their neighbours in Bihar. The Indian government had built an embankment to protect its citizens, which meant that villagers in Nepal would be inundated every monsoon. I visited Tilathi in July, before the real floods began, and its people were already wading in knee-deep water. When the floods breached the embankment in August, villagers in Nepal refused to let the Indian government rebuild it. “Our homes and land get submerged because the path of the river has been blocked,” Dev Narayan Yadav, a local teacher, said. The waterways have formed new courses. “It’s flowing backwards now. This is not good.”

The Indian media claimed that Nepal had deliberately released flood water to shift the curse downstream. However, the truth is that all the embankments and barrages along the border are built and controlled by India. Nepal has no control.

“For 25 years, forests have been cut, roads have been built and wetlands encroached,” says Dixit. “And drainage has been completely disregarded.” All across Nepal’s plains, there are road embankments swept away by the force of water escaping submerged villages.

By August 13, the storm had stopped but entire districts were cut off. The area of the floods was so large, and the rains so incessant, that in the initial days the Nepali government was paralysed. “We had one raft and 50 life jackets,” Uddav Bahadur Thapa, the chief district officer of Rautahat, said. The district does not even have ropes long enough for rescues. International donors have spent millions of dollars in recent years on ‘disaster preparedness’ yet there’s no obvious improvement. As one police officer said, when you are given training but no equipment, there’s not much you can do.

Stories of those trapped were related by telephone. In the town of Gaur near the India-Nepal border, people were stranded for three days. The Indian government had built an embankment to protect the town of Bairgania, in Bihar’s Sitamarhi district. “We watched the town across the border, which was dry and bright, as we were drenched night and day,” Yogendra Ray Yadav said. The water eventually escaped after a section of the embankment collapsed. The story of the floods moved south.

Two weeks on, many villagers still don’t have shelter or food. Rajendra Ram Chamar, from a so-called untouchable caste, said his family is constantly hungry. He lives in a family of 10 but got relief meant for four people. “All I ever owned was one house and now that too is gone. If you can send some food, that would be good.”

Another villager said, “Our leaders come in a helicopter, distribute a few sacks of rice to their supporters, take a selfie and post it on Facebook.”

Viewed from South Asia, it looks like the situation in America is moving closer to ours. Doesn’t it look like differences between our lives and politics, on different sides of the world, is shrinking?