Near the Narmada, a Village Withers in the State's Blindspot

"We are tired of being angry," one resident said. 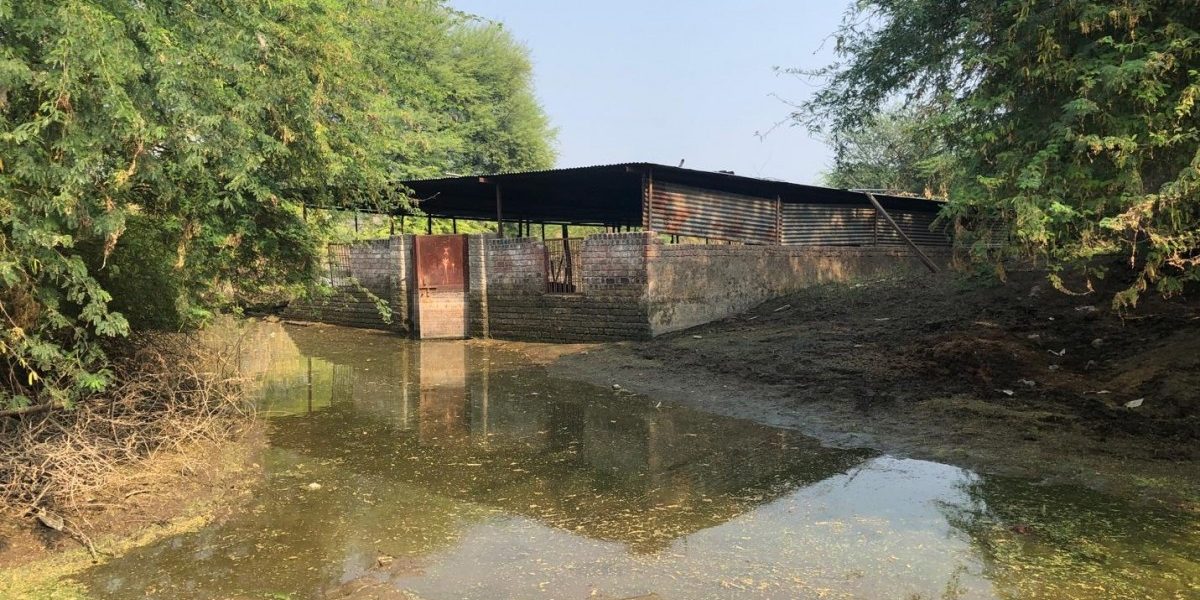 Farmers in Kasravat village had to evacuate their cattle sheds after the Narmada flooded in August. Photo: Anjali Rao Koppala

Dhar, Madhya Pradesh: At 8 am, it’s time for buffaloes to graze on fresh green grass – but not so in Kheda basti, where buffaloes will feed on dry fodder instead. Kheda is part of Chikhalda, a village in the Dhar district of Madhya Pradesh. It used to have 739 households but is now knee-deep in water, if not deeper, and eerily quiet. Nearly all of its families and livestock are scattered across three rehabilitation sites that the government erected to house those displaced by the Sardar Sarovar Dam, located only 10 km away.

Babulal Bhai (40) has decided to stay back, however, along with 15 buffaloes, seven cows and four goats. He is a member of the nomadic Dhanghar tribe, which has traditionally raised livestock for food and a living. Bhai’s family is one of 12 from the same tribe currently living on the outskirts of Chikhalda. This village is located in the Sardar Sarovar Dam’s catchment area, and was one of the worst-hit when the Narmada river overflowed due to heavy rains five months ago. Some ten Dhanghar families since switched occupations or became agricultural labourers.

Bhai used to own 40 buffaloes, 11 cows and eight or 10 goats. But when the village went under, so did over 200 acres of grazing land.

“Since the cost of raising dairy cattle has doubled, most families from our community have sold off the majority of their stock of animals,” Bhai told The Wire. “As a result, the village that used to boast of 1,080 livestock, of buffaloes, cows, goats, sheep and calves, is now left with less than half of this number.” 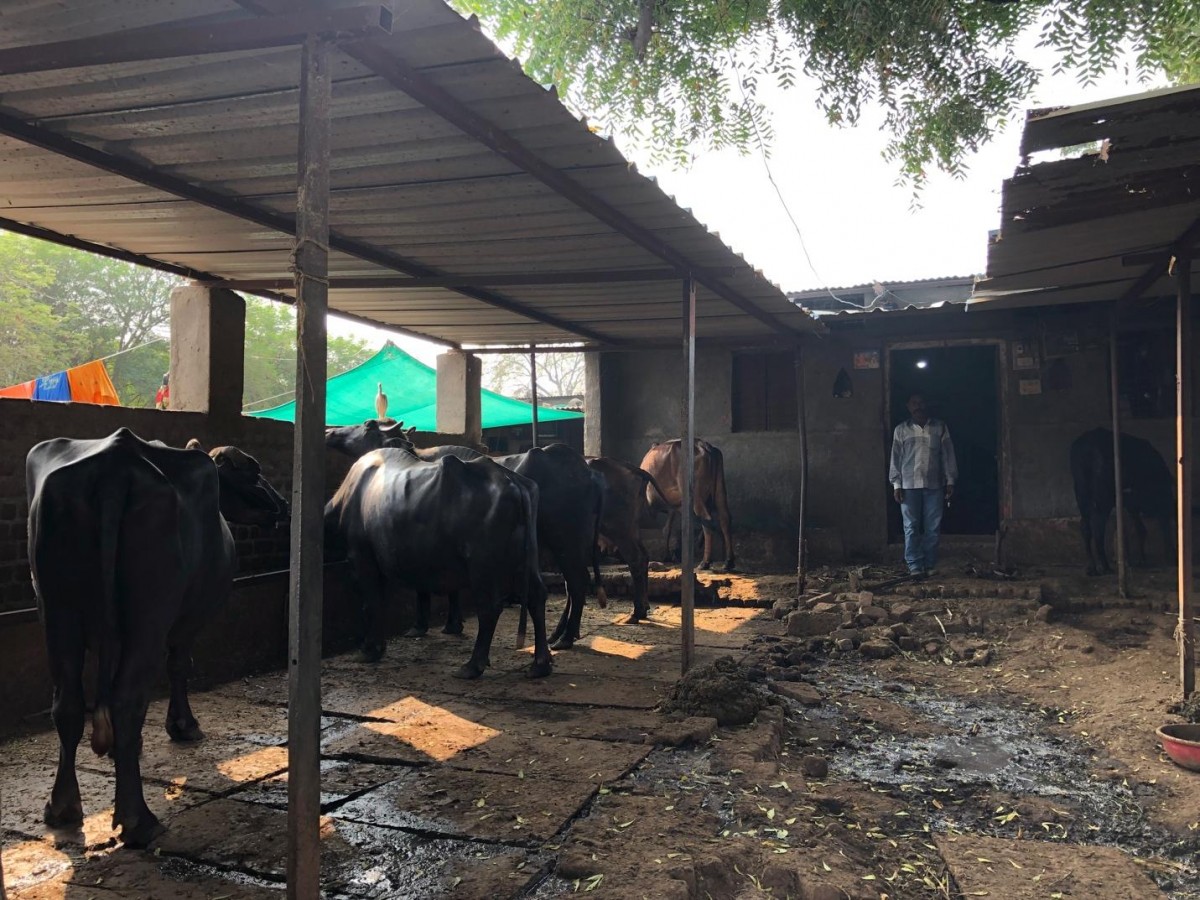 Babulal Bhai with some of his buffaloes in Kheda basti. Photo: Anjali Rao Koppala

The Dhanghar of Madhya Pradesh typically raise the Jafarabadi and Murrah breeds of buffalo. The Jafarabadi is a riverine buffalo that originated in Gujarat and Murrah, a water buffalo that hails from Punjab and Haryana and reared mostly for their milk. Each buffalo costs Rs 1-1.5 lakh.

The dairy cattle used to feed on grazing land, in the forests and hills, at no cost. After Chikhalda lost its grazing land, cattle-herders did the next best thing and took their cows, buffaloes, calves, sheep, lambs, goats and their kids to the cotton fields, after the cotton flowers had been plucked. But the bollworms that often infect these plants, together with the pesticides and insecticides, give cattle acute diarrhoea. Kalubhai (44), another resident of Chikhalda, lost over 100 of his animals this way.

Now, the cattle eats dry fodder, whose price in the last few months has increased from Rs 500 per quintal to Rs 850-900. A little under a score quintals of dry grass used to be able to sate Bhai’s 40 buffaloes and 11 cows, but now he has to spend on 30 quintals for 15 buffaloes and seven cows, as well as on khal, a dried cottonseed cake that helps the buffaloes produce milk. Each buffalo needs 6-7 kg of khal on average, and it costs Rs 42 per kg.

The Dhanghar’s cattlers used recover some of their costs by selling dried dung, useful as manure. But without grazing land, they have no place to dry the dung now, and it lies rotting in and around their houses. 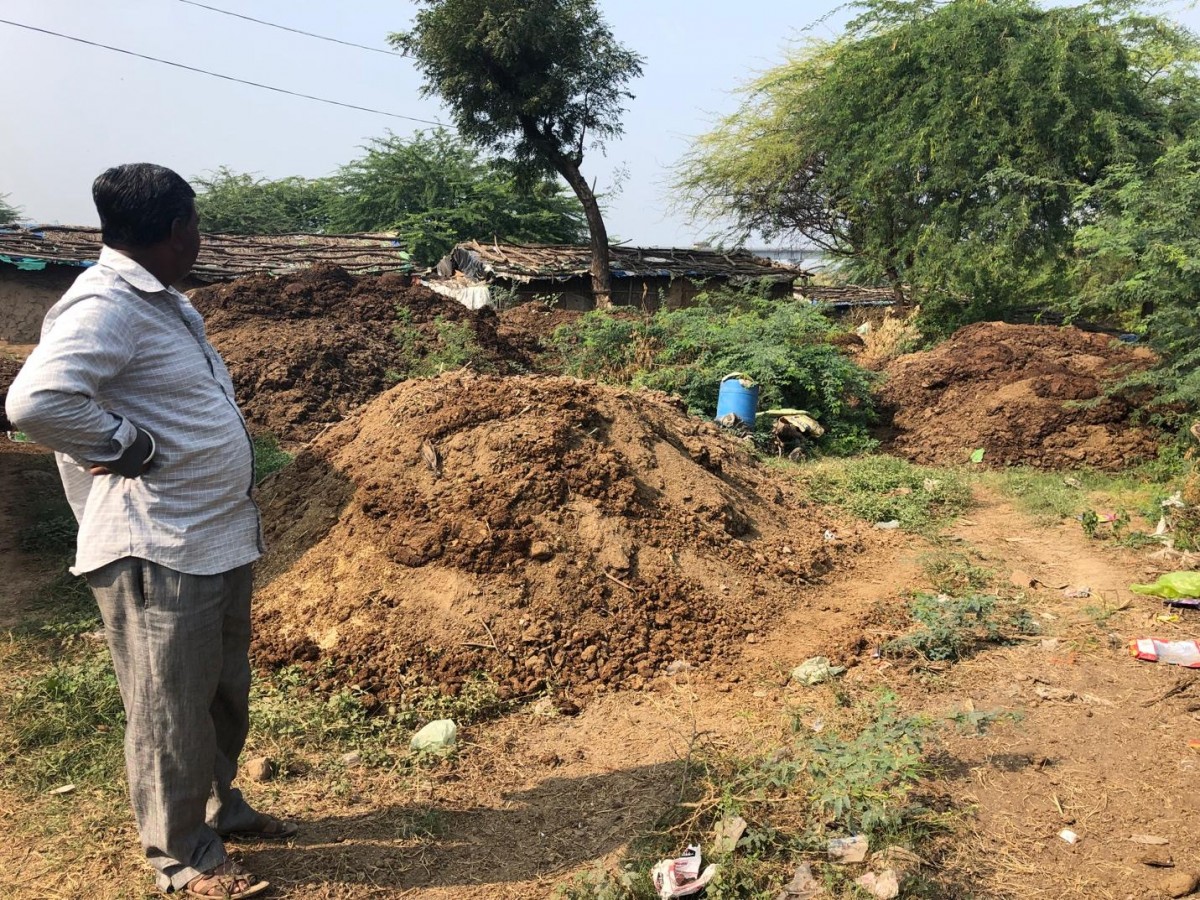 A member of the Dhanghar community looks at a pile of dung outside his house in Kasravat village. Photo: Anjali Rao Koppala

To make matters worse, their cattle hasn’t been able to produce enough milk. A buffalo that used to make five or six litres of milk a day is now able to give only 1.5 litres. Without the government revising the price – Rs 40 per litre – at which the local dairy plant has bought their milk since 2017, the Dhanghar’s revenue has plummeted.

The two main reasons appear to be the shortage of green fodder and clean drinking water. Bhai speculates the cattle not being able to roam around has affected their metabolism as well.

The buffaloes aren’t alone. The humans of Chikhalda don’t have access to clean drinking water either. “The water supply has been disrupted since the submergence, and the women have to now travel a kilometre daily to fetch water from the adjoining rehabilitation sites for domestic purposes,” Bhai said.

“Even the water tankers have refused to come to Chikhalda since the connecting routes and roads are flooded,” Kalubhai said. “So the livestock has to meet its requirements from the stagnant water of the Narmada river that had flooded the village in August.”

This water is very contaminated and infested with disease-bearing insects.

Unlike Kalubhai, most members of the Dhanghar have sold their stock of goats and sheep to the butcher to meet their expenses. Their calves in particular had become very vulnerable to disease without green fodder and clean water.

Stories like this abound in village after village along the Narmada’s banks. 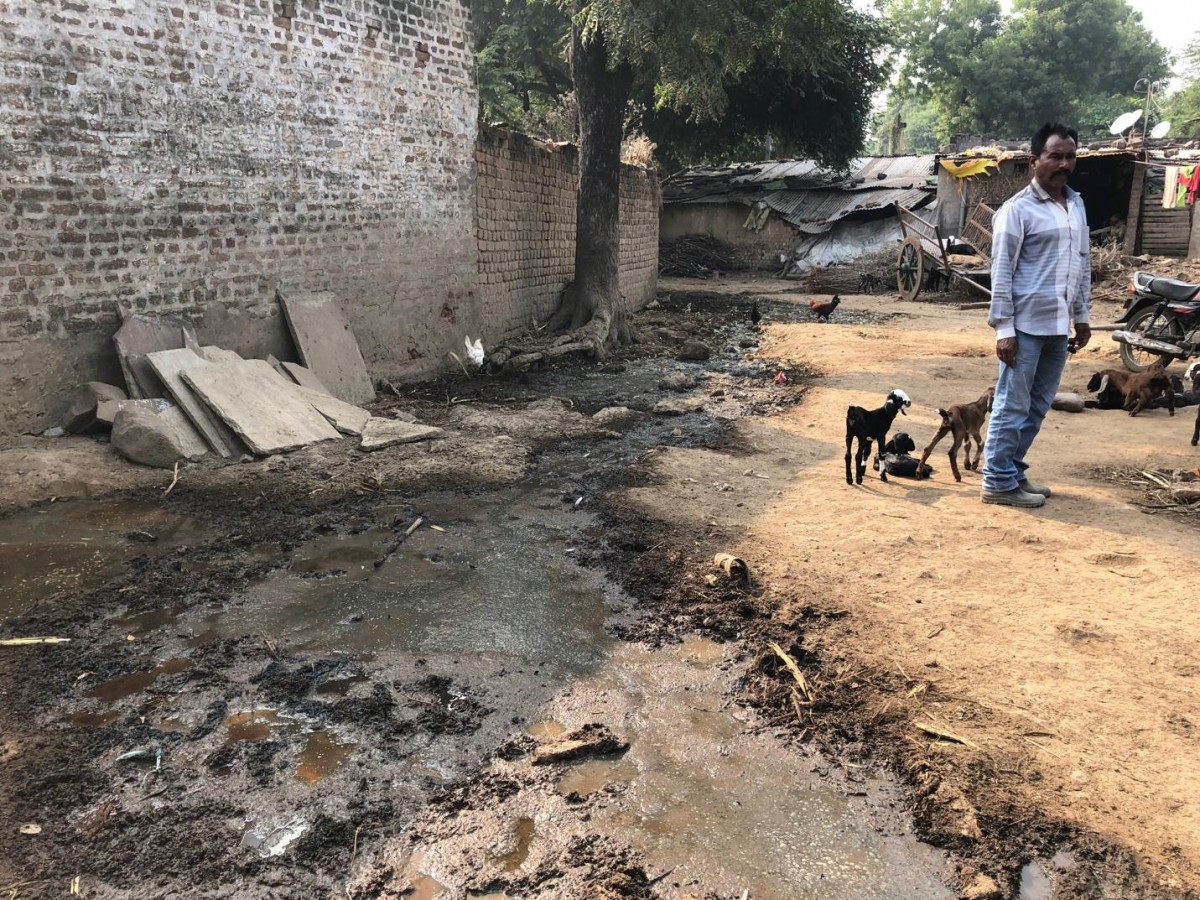 The roads have been left mangled and unnavigable after the Narmada’s backwater receded. Photo: Anjali Rao Koppala

These families don’t live in Kheda basti because they want to. They’re here because they were excluded from a survey the Narmada Valley Development Authority (NVDA) conducted in 2008 to identify families whose houses will lie in the submergence zone (once the reservoir is filled). The NVDA is the government body that oversees rehabilitation work. Their names didn’t make it to the final roster even though they did lose their homes, and so they didn’t receive the government’s compensation either.

Each affected household is currently entitled to a 60 × 90 sq. plot of land – or a smaller plot for those displaced after the Madhya Pradesh government notified the Narmada Water Disputes Tribunal award in December 1979 – and Rs 5.8 lakh.

“Some of the families had received monetary compensation between Rs 45,000 and Rs 90,000 in 2002, depending on whether the household had a kutcha or a pucca house, and a plot of land,” according to Kalubhai.

Those who got both left Chikhalda, and most of those left behind were from Kheda basti. They subsequently compiled a list of 54 potential beneficiaries and submitted it to the patwari. Now they wait.

According to the Madhya Pradesh government’s rehabilitation and resettlement (R&R) policy, the NVDA has to to set up cow shelters at its rehabilitation sites and make grazing land available according to the cattle population at each site. However, the R&R sites near Kadmal and Nisarpur villages in Dhar district don’t have either of these amenities.

In a 2017 order, the Supreme Court had directed the NVDA to officially reserve government land for grazing across 83 rehabilitation centres before December 31 that year, and to construct artificial water tanks next to wells to supply their drinking water. The NVDA has effectively defaulted on both counts.

Rukdiya Bhai (38) lives with his father, three brothers, their wives and children at the R&R site near Nisarpur. The family used to own 280 goats and sheep but had to sell them all, and now it makes do with 40 buffaloes. Each of his father and brothers had received plots of land but only two of them also received the first tranche of the promised Rs 5.8 lakh. Fortunately, Rukdiya got the full amount. 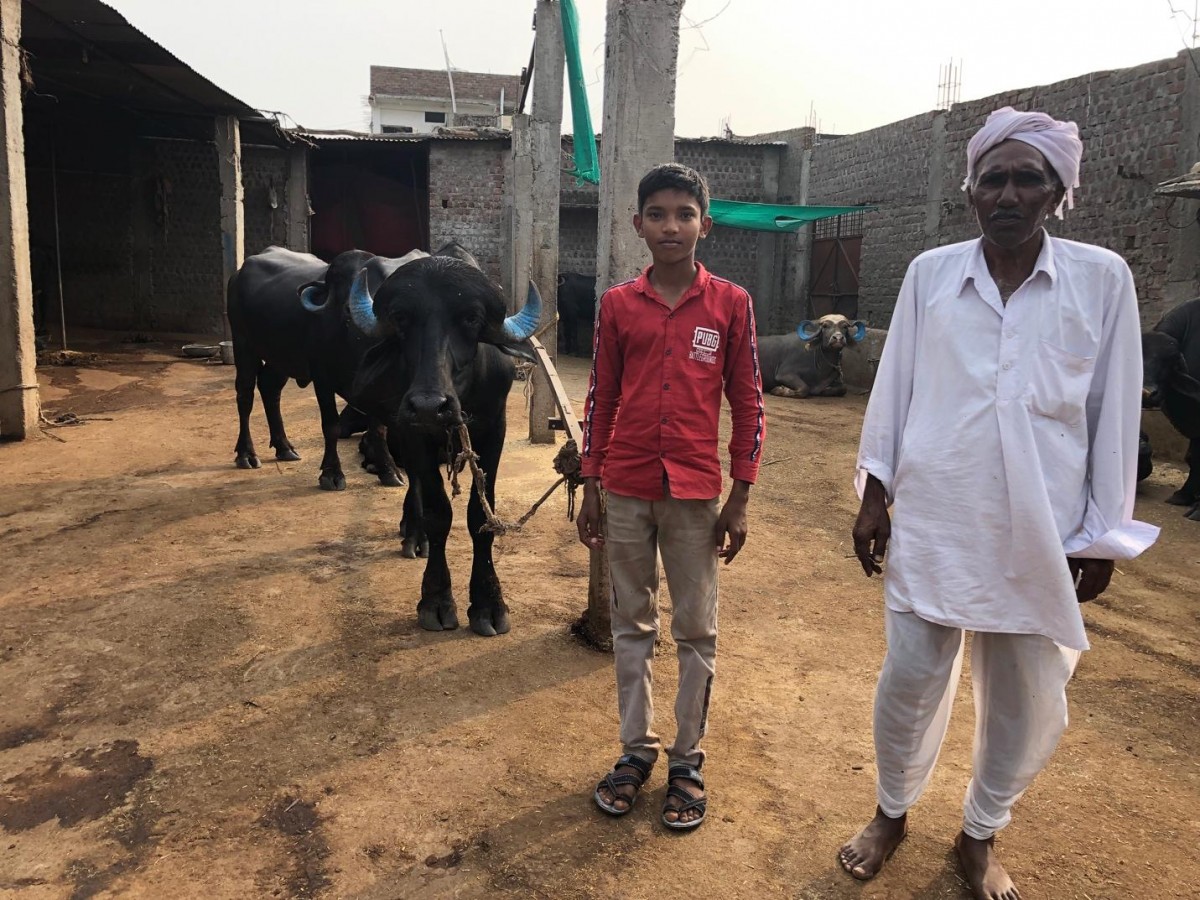 They pooled their resources and built a house and an open shed for their cattle at the R&R site, but the result hasn’t been nearly enough. The 5.8 lakh rupees couldn’t cover the building expenses and the family had to borrow from relatives. They are also cramped for space, and they balk at how much more they would have to spend to erect permanent cattle sheds.

“The banks have stopped lending money to people who hail from submergence zones, and we have no other recourse but to rely on our relatives and friends,” Rukdiya said.

Many others have received neither land nor money, and the state seems generally blind to their plight. There are no street-lights and the kutcha roads at the site render walking nearly impossible. “The governments have come and gone but not one of them has lived up to the promises guaranteed by the state,” Rukdiya said.

Rukdiya Bhai, Babulal Bhai and Kalubhai have all actively participated in protests that the Narmada Bachao Andolan (NBA) has organised. The Dhanghar community also actively mobilised its members across the Barwani and Dhar districts in 2017, bringing out all their livestock onto the roads for a whole day to draw the attention of the district collectors and officials of the department of animal husbandry. Some of them also took part in a six-day satyagraha the NBA organised outside the NVDA office in Bhopal in November.

The animal husbandry department has since agreed to provide fodder, especially for cattle living in tin sheds. The NBA has already submitted the corresponding list of families to the NVDA office.

Bhagirath Bhai (48), another member of the Dhanghar, said, “Unless the government allots grazing land around the R&R sites and provides an uninterrupted supply of drinking water for the cattle, no relief measures will have lasting impact.”

The government must act quickly too, and without having to be prodded every time. The near-constant agitation and worries about their future is taking a steep toll on the Dhanghar. As Rukdiya said, “We are tired of being angry.”

Anjali Rao Koppala is currently pursuing a master’s in development at the Azim Premji University, Bengaluru.