The prime minister’s announcement is an improvement over the figure quoted by Prakash Javadekar, but lower than the number that the environment ministry had earlier decided upon. 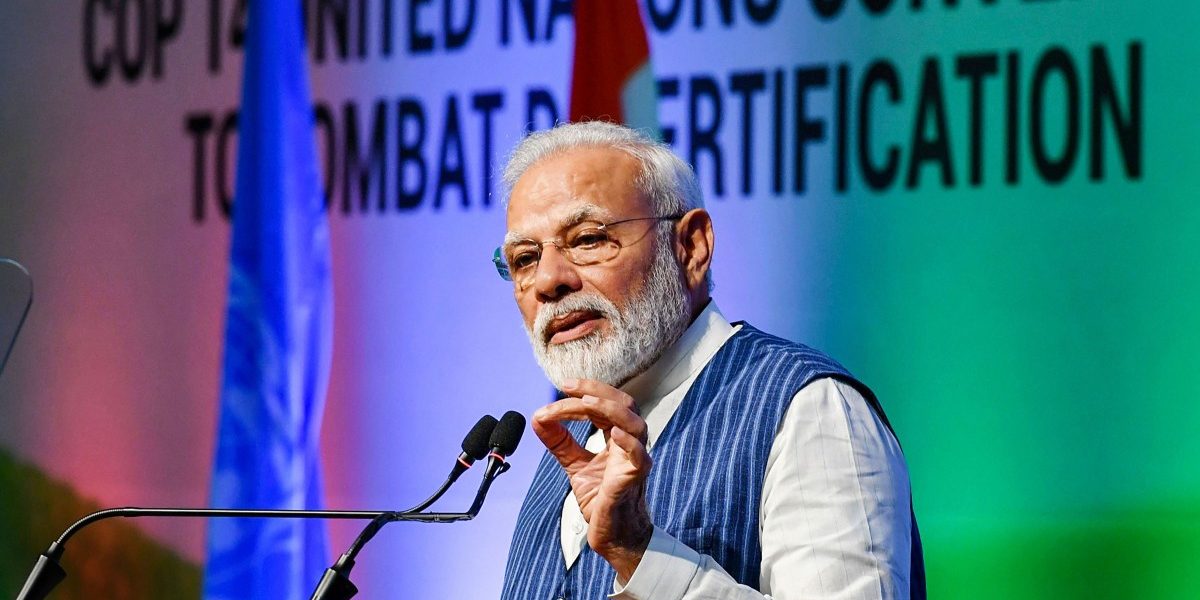 New Delhi: On Monday, Prime Minister Narendra Modi addressed the 14th Conference of Parties (COP 14) of the United Nations Convention to Combat Desertification (UNCCD), being held in Greater Noida since September 2. He spoke broadly on the threats posed by climate change including the loss of biodiversity and land degradation – which are the focus areas of this conference.

Outlining India’s resolve to combat the threats of land degradation and loss of biodiversity, Modi invoked the country’s spiritual connection with land. “In Indian culture, the Earth is held sacred and treated as the Mother. While getting up in the morning, when we touch the earth with our feet we seek the forgiveness of Mother Earth by praying,” he said.

An increase, a decrease and another increase

Modi announced that India will be increasing its land restoration target “from 21 million hectares to 26 million hectares”. This target, the prime minister said, will be achieved by 2030 to aid India in reaching land degradation neutrality, as required by the UNCCD.

There has been a degree of confusion regarding India’s land restoration target. Down to Earth has pointed out that the Ministry for Environment, Forests and Climate Change decided on June 17 at the Land Degradation Neutrality Target Setting Programme that it will be setting a target of restoring 30 million hectares of degraded land.

On August 28, however, at the curtain raiser for the COP 14, minister in charge Prakash Javadekar said that the target figure was substantially lower, at five million hectares.

Thus, Modi’s announcement is an improvement over the figure quoted by Javadekar, but lower than the figure that the ministry had earlier decided on.

Even the 26-million-hectare target which has now been set by Modi is only 27% of the land that is already degraded in India. According to a 2016 study by the Indian Space Research Organisation (ISRO), 96 million hectares of land area in the country already stands degraded.

Speaking at the conference, Modi also claimed that India increased its tree cover by 0.8 million hectares between 2015 and 2017. “In cases where there is any diversion of forest land, that has to be compensated by afforestation and a monetary payment is also made,” he said.

Also read | How Did India End up Staring at a Water-Uncertain Future?

India’s data on tree and forest cover has come in for questioning, including by the UN itself, as Business Standard reported this January. It had found that the tree cover data submitted by India was lacking transparency and clarity. “The data and information used by India in constructing its FRL are partially transparent and not complete and therefore not fully in accordance with the guidelines contained,” a UN review said of the data provided by India.

Experts and academics have also raised eyebrows at the government’s claim that the tree cover in India has increased. They have said that India has erroneously included commercial plantations in its tree and forest cover data.

Modi also claimed that measures such as micro irrigation and the government’s promotion of zero budget natural farming (ZBNF) will lead to the restoration of degraded land and minimise further erosion.

However, as The Wire has reported earlier, no scientific studies have been completed on the effectiveness of ZBNF in achieving any of what the government claims it can. Government-funded research institutes are in the process of testing its effectiveness on various parameters, including its impact on soil quality, which is relevant here given Modi’s claim that ZBNF can help achieve the goal of land degradation neutrality.

Modi also used the platform to underline his government’s commitment to ending the use of single-use plastic. “Menace of plastic waste will also lead to land degradation and it will be irreversible. We will put an end to single use plastic in the coming years. The time has come for world to say goodbye to single use plastic,” he said.