Water is still not reaching those who need it, while people are being forced to give up their homes and livelihoods linked to the Narmada. 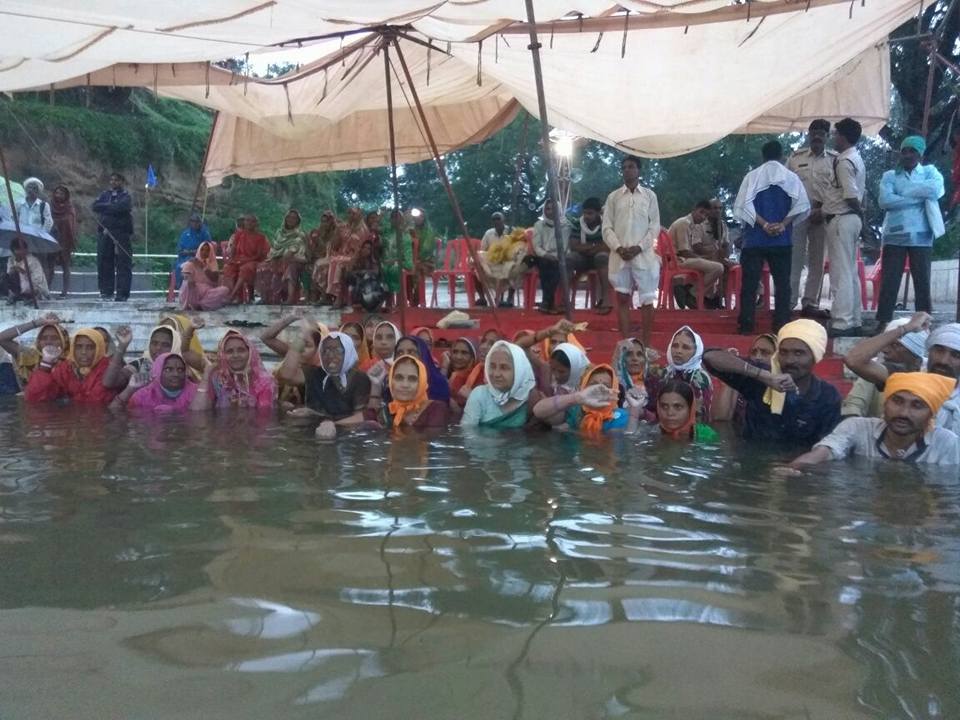 All preparations had to be complete prior to the function in which Prime Minister Narendra Modi ‘gifted a dam’ to the nation on his birthday on Sunday (September 17). The Sardar Sarovar dam was lit up and 2,00,000 people (comprising farmers, fishers, potters, pastoralists, Dalits and small enterprise holders) had to be submerged for the Narmada Mahotsav (and Modi’s birthday) to be a success. For this, water was diverted into the Sardar Sarovar reservoir from unfilled dams, raising water levels to 129.64 metres and beginning the inundation of 191 villages and one township in Madhya Pradesh. The 30 sluice gates at the dam site have also been closed since June 17 this year, allowing water to fill the reservoir.

False claims have been made in the Indore high court about the provision of all basic amenities in 88 rehabilitation sites. It has been announced that the disbursal of compensation amounts of Rs 60 lakh and Rs 15 lakh to 681 families in Madhya Pradesh is complete, when fewer than half of the beneficiaries, the oustees of the dam, have received it. Economists like Swaminathan S. Anklesaria Aiyar took care of the rest of the preparations by telling a nation of a billion people that tribal people ousted by dams will flourish and adapt in no time and with limited trauma even, as if the Narmada Bachao Andolan kept the struggle alive for 32 years when there was no injustice being perpetrated.

Also read: On Narendra Modi’s Birthday, Will He Remember Those Fighting for the Narmada?

Distortion of the benefits of the dam

The main objective of the dam, which was to provide people with water for drinking and irrigation, has been entirely recast. In Gujarat, water is being made available to the factories of Coca Cola and Tata Nano car, to corporates like the Adani and Ambani groups, to six industrial centres, and to fill a stretch of the Sabarmati river in Ahmedabad – while throats and fields of farmers in Saurashtra and elsewhere remain parched. Out of the 17.92 lakh hectares of land to have been irrigated, only two lakh hectares have actually benefitted. The project was accorded sanction for a canal network of 90,389 km; however, the government of Gujarat talks only of a 71,748-km canal network, a decrease by 18,641 km. Madhya Pradesh and Maharashtra, having received no benefits of water, are getting only 56% and 27% share in electricity respectively – which is ridiculous as in the state of Madhya Pradesh alone, it has been predicted that the production of electricity will be in excess of the demand for the next 15 years. 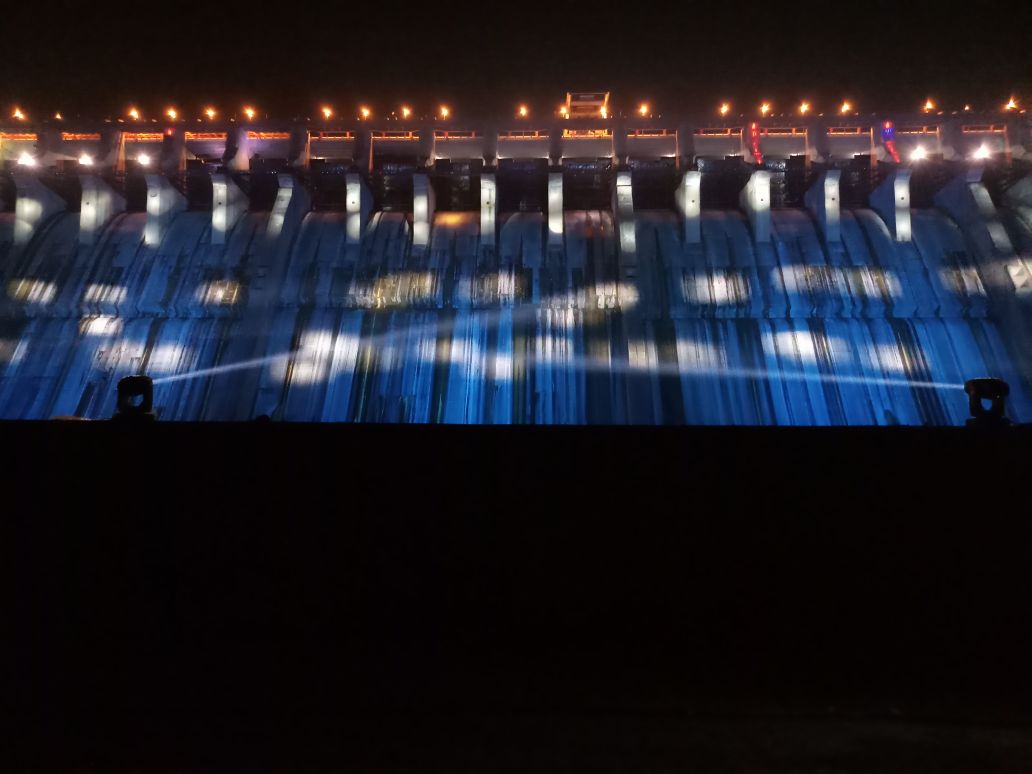 The Sardar Sarovar Dam lit up ahead of the Narmada Mahotsav. Courtesy: Narmada Bachao Andolan

In 1983, the cost of the project was estimated at Rs 4,200 crore. In 1988, the Planning Commission approved the project at an estimated cost of Rs 6,400 crore. Today, the cost of the project has sky rocketed to Rs 99,000 crore. According to a letter from the citizens of Gujarat to the president, an average amount of Rs 9,000 crore is annually provided for and spent, for the construction of the remaining canal network. Even now, approximately 42,000 km of canal is yet to be constructed because of which only 20-30% of the irrigation benefit has been achieved. Maharashtra has claimed coverage for the loss of the amount Rs 1,800 crore. Crores of rupees have been spent on building tin sheds, which are illegal as per the Narmada Water Disputes Tribunal Award and three Supreme Court judgments. Again, crores of rupees were spent on Narmada Mahotsav and the celebrations around it. No wonder, then, that the total loss is being estimated to be thousands of crores of rupees. 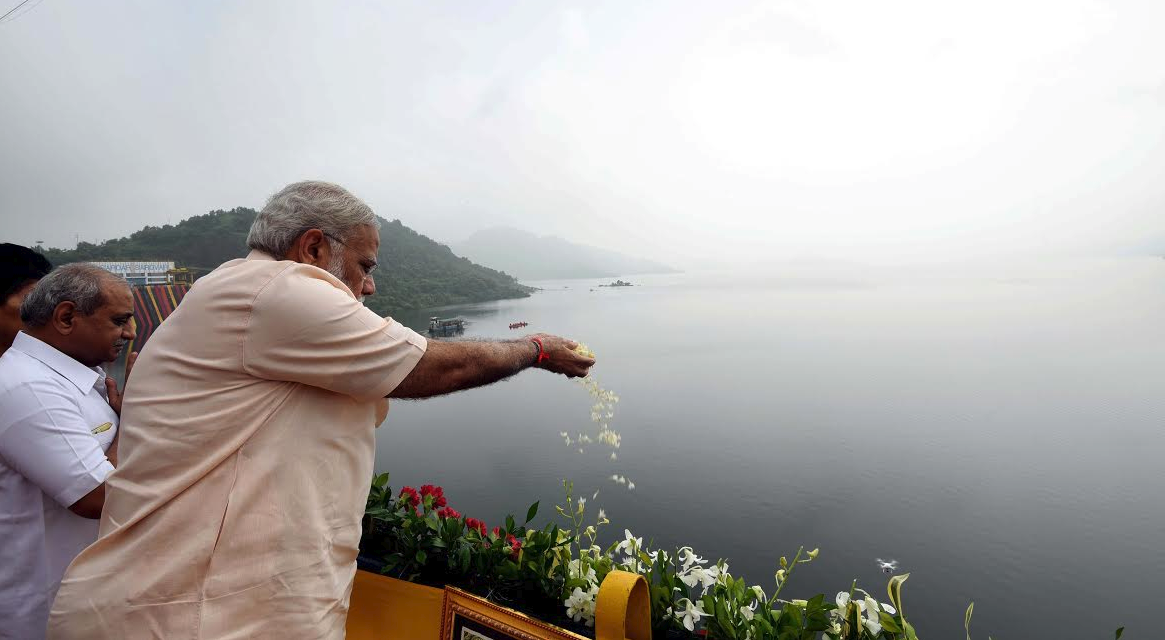 Environmental clearances for the project were granted in 1987 without complete assessment of environmental impacts, on the condition that environmental studies will be undertaken and mitigation of the impacts will happen pari passu (side by side) with the construction of the dam. Till date, this has not been followed. The issues – catchment area treatment, command area development, compensatory afforestation, loss of flora and fauna, protection of downstream environment, seismicity and rim stability, health aspects, archaeological loss and anthropological setbacks – were required to be considered by the environment sub group at each stage of clearance given for increasing the dam height. Though work done on these environmental aspects is far from complete, the government has obtained permission to increase the height of the dam at every stage based on false reports of environmental compliance.

State of affairs in villages to be submerged

The 214-km-long reservoir of the Sardar Sarovar dam is set to submerge 40,000 hectares in area (including 13,835 hectares of forests), which includes 244 villages and one township in the three states of Madhya Pradesh, Maharashtra and Gujarat. Out of these, 191 villages and the township are located in the state of Madhya Pradesh and currently face submergence. The resettlement and rehabilitation work done in all three states is dissatisfactory.

In Gujarat and Maharashtra, around 15,000 families were resettled and rehabilitated. But there are massive inconsistencies in the process and thousands of families continue to struggle. In Kevadia colony in Gujarat, about 200 representatives of project-affected people are protesting with their long-pending rehabilitation demands; they were on a relay fast for a year. Where the canals have been constructed in Gujarat, there are holes and pits in their banks which damage the surrounding areas including crops and villages. During the recent floods in Banaskantha district, the flood situation was aggravated and worsened because of these breaches. In Maharashtra, tribal populations of the submerged villages are pleading for land. 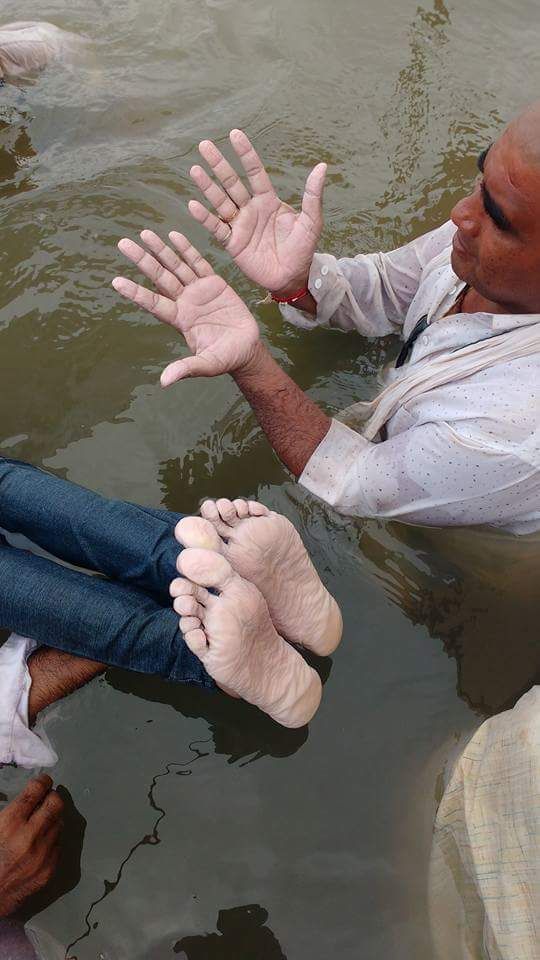 Hands and feet of protesters sitting on a jalsatyagrah in Chhota Barda village in Madhya Pradesh. Courtesy: Narmada Bachao Andolan

In Madhya Pradesh, the resettlement sites continue to lack basic amenities like drinking water, sewerage, electricity, water and grazing land for livestock, land for public building like schools and medical care facilities. Most of the plots provided for housing are on black cotton soil, where levelling and construction are difficult. The size of the house plots is also a fraction (one-third) of what was promised. The list of 681 families eligible for the cash compensation of 60 lakh and 15 lakh, as announced in the 2017 Supreme Court order, is also highly flawed. Between 2008 and 2010, 15,946 families were excluded from rehabilitation by the Narmada Control Authority in the state as they were unscientifically declared “unaffected by lowered back water level”. Many who consented to rehabilitation in 2005 were either duped in fake registry scams as brought forth by the Jha Commission report or received unfair, incomplete or no compensation at all. A survey done by the NBA in 38 villages in Madhya Pradesh shows that 308 religious sites, out of which 117 are very ancient, will be submerged and lost. Today, as water enters villages in the state, 40,000 families in the submergence zone refuse to move as they have nowhere to go.

“We will fight, we will win,” say the oustees facing submergence in Madhya Pradesh

Rajendrabhai of Chikhalda village said with strong emotion, “Narmada is not a water tank for us, she is our mother,” suggesting that their relationship with the river goes beyond material fulfilment. Women in Kadmal village, who were sitting on a relay fast in the month of July and protesting vociferously for fair compensation, wondered if the loss of land and a way of life inseparable from the river can ever be compensated. When facing such loss, it is no wonder that the dismal situation has still not broken the mettle of the andolankaris in the Narmada valley. On Sunday, as Modi was ready for the jalhatya (drowning to death) of 40,000 families in Madhya Pradesh and chief minister Shivraj Singh Chouhan had become a mute partner in it, 36 agitating villagers stood as jalsatyagrahis (protestors standing in the water) in Chhota Barda village to protest the celebrations and agitate against the rising water levels of the Narmada. The satyagrahis were badly affected – their skin came off and they shed blood due to long exposure to water, but with an indomitable belief in non-violence and a spirit that never gives up, they declared that the resistance to the apathetic state will continue in the valley until families are rehabilitated rightfully and justice is delivered.

Sneha Gutgutia is with Kalpavriksh, Pune.