On Narendra Modi's Birthday, Will He Remember Those Fighting for the Narmada?

For people living by the Narmada in Madhya Pradesh's Nimar, Modi’s birthday is being seen as a death day for their homes and livelihoods. 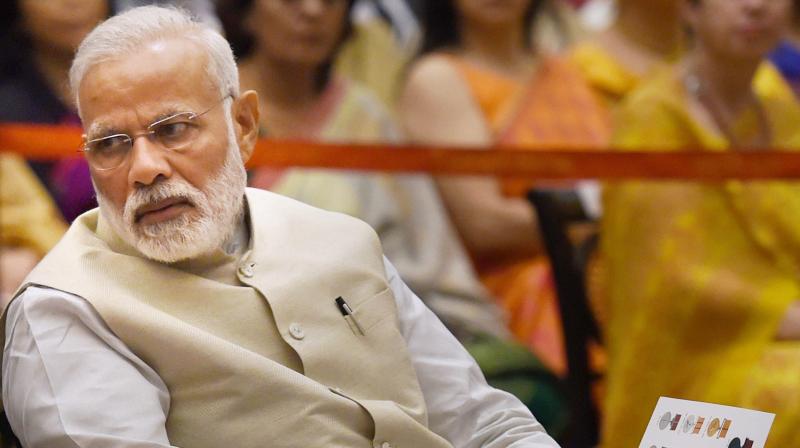 September 17, Prime Minister Narendra Modi’s birthday, is to be celebrated with much pomp on the banks of the Narmada in his home state of Gujarat. Hundreds of saffron-clad sadhus and holy men are to grace the occasion and the waters of the Narmada river are to be brought to flow in Gujarat.

Across the border in Madhya Pradesh, however, Modi’s janamdin (birthday) is being seen as the marandin (death day) of their homes and livelihoods by thousands of rural families in the Nimar region.

These are the people for whom ‘Ma Narmada’ has been a beneficent deity for centuries. Her banks are dotted with shrines, temples, mazaars and masjids. Villages and small settlements in the area have built and cared for their ghats, which witness not only aarti and daily prayers being offered to the river, but also the tethering and loosening of numerous boats which ferry people across and along the river. The ghats are also home to the numerous fisherfolk who have no other means of livelihood than what the river provides them.

Also read: As Narmada Struggle Reaches Its Most Critical Phase, Governments Must Listen to the Displaced

The villages and small town along the river banks in this area are relatively prosperous when compared to the drought-prone parts of the state, which include areas on the banks of the upper reaches of the river. These areas are deprived of the water they need for agriculture and daily life by the fact that it being transported to distant places tosatisfy corporate needs. This transfer of a precious resource was justified in the name of production and supply of electricity to those from whom it was taken, but the power houses are mostly owned by private corporations and the electricity that they produce is being bought at high rates by the state government. These rates are unaffordable for those who have are now farmers of parched fields.

Today, a new form of devastation threatens not only the prosperity but the very existence of those living in the Nimar region – a region whose rich, black soil, irrigated by the generous waters of the Narmada, produces cotton, superior papayas, a variety of vegetables and, of course, all the staple crops. This, however, is the very region that has been threatened with ‘doob (drown)’ inundation for the last two decades. The ‘doob’ was to have occurred in 2006 but it was prevented by an intervention by the Supreme Court, which decreed that proper rehabilitation of and compensation for all those losing their land and livelihoods would have to precede the doob. This intervention was the result of the struggle that the people of this region, with women of the farming, labouring and fishing communities at the forefront, had been waging to protect their land, their living, their communities and their culture for nearly two decades. This struggle, led by the Narmada Bachao Andolan and its indomitable leader Medha Patkar, continues today. It is now facing its most existential crisis.

Rehabilitation and compensation remain a mirage. They have been replaced with broken promises, specious claims and downright falsehood and falsification of ground realities. The courts are not satisfied with the claims made by the state and central governments, and have asked them repeatedly to submit proof of their having provided both compensation and rehabilitation. It was expected that the people engaged in both constant struggle and constant work and labour would be recompensed in a just and equitable manner.

The prime minister, however, is a man in a hurry. Not only is his birthday to be celebrated, but water from the Narmada in Madhya Pradesh has to be seen to have been brought to Gujarat before the crucial state assembly elections in November this year.

And so gates of the dam in the upper reaches were opened recently. Water that was much-needed there was brought downstream to begin the process of ‘doob’ in Nimar, which is a precondition for the miracle of water in Gujarat to occur. This water is not, however, going to benefit the farmers of Gujarat because the canals necessary to make it flow into their fields are far from complete. It is also not going to be used to show them what will eventually bestow fertility to their parched fields. It will, however, be made available to corporate and soft drink producers.

In preparation for the birthday miracle, the waters of the river in Nimar have started rising. To add to the danger of flooding, heavy rains also occurred on September 15, the day that the resistance to the ‘doob’ exploded in the region.

The evening of September 14 saw water entering homes in the village of Chikalda. The residents of the village immediately started a dharna in protest.

The rains started early on September 15 morning, but that did not deter the courageous protesting men and women who collected in Anjar town for a rally and public meeting. Anjar is a large, old town which owes its prosperity to the farming community. It is an important mandi. The traders have been traditional BJP supporters. On the 15th, however, their support to the Andolan was total. In pouring rain, men and women shouted slogans like “Narmada Bachao, Manavta Bachao (Save the Narmada, Save Humanity)” as they marched through the streets thronged with traders, shopkeepers, housewives and youngsters who joined in the slogan shouting. In the middle of the market, the meeting was addressed by Patkar and other Andolan activists. On behalf of the Communist Party of India (Marxist), I also expressed our solidarity with the struggle. The rain was pelting down, but not a single person sought shelter from it. 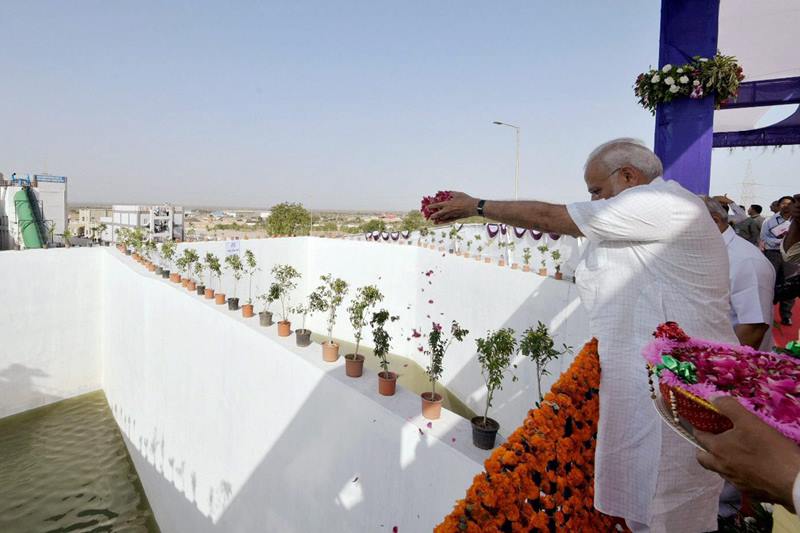 Prime Minister Narendra Modi in Bhachau, Gujarat at the inauguration of the third pumping station on the Kutch branch of the Narmada canal network, which will take water to the Tappar dam in Anjar taluka, which is over 600 km from the river Narmada that flows through south Gujarat. Credit: PTI

Then the rally proceeded to Chota Barda, also threatened with ‘doob’. The villagers have hung a banner at the entrance to the village which says “Yahaan sirf bhoot-pret rehte hain (Only spirits and ghosts live here)”. The banner mocks the government’s claim that all the inhabitants have been compensated and have left. They were all very much there to join the procession that marched through the village, shouting slogans, ending at the ghat. The river was swollen and its waters had started lapping against the top of the ghat, almost covering the steps leading down from it. Only the top two steps were still visible. A large meeting was held at the ghat and then the announcement came that a ‘jal satyagraha’ would start which would last for 24 hours, giving time to the government to intervene. As the crowd of people moved towards the ghat, they sang a song in praise of Ma Narmada, Narmada Devi. It was almost unbearable to hear the hope in their voices, the hope that their river would come to their rescue and would not participate in their drowning.

By Medha Patkar: Politics Over Narmada, Once Again

Forty women from the village sat with Patkar on the ghat, their feet in the water. Some of them are old. Manjula had left a sick husband at home. He had told her that she should join the struggle. If the struggle failed, they would die anyway. She herself was shivering and wet but there was not a trace of hesitation as she sat down with Patkar. Shyama, Bhagwati and many others took their places. They are seasoned and battle-scarred veterans of a struggle that has turned thousands of ordinary rural people into courageous fighters.

The river waters are rising steadily. The jal satyagraha has now become an indefinite one, because the government has not relented. The 40 women are now 129. The crowd of supporters forming a circle behind them is now in the thousands. The Madhya Pradesh chief minister has announced that he will not be participating in the birthday celebrations in Gujarat. Perhaps the accusation of betraying the interests of his people is hitting home.

There are many rumours of high-level meetings but only one thing is certain: the people of the Nimar area will not surrender their right to life and livelihood nourished by the Narmada. They will do whatever is needed to see that the prime minister’s janamdin does not become a marandin for them and theirs.