The violence in Amapá came as far-right president Jair Bolsonaro continues pressing for legalisation of mining and agribusiness operations within protected indigenous reserves.

Brazilian authorities are investigating the murder of an indigenous leader in the northern state of Amapá, in the Amazon region, where violence has escalated since a group of 50 gold miners – 13 of them reportedly heavily armed – allegedly invaded the Wajãpi indigenous reserve.

On the morning of July 23, indigenous chief Emyra Wajãpi was found dead, stabbed close to the Waseity indigenous village where he lived, according to the Wajãpi Village Council (Apina). His death was not witnessed by any Wajãpi, Apina said in a statement.

On the night of July 26, a group of non-indigenous men armed with rifles and machine guns reportedly invaded the neighbouring Yvytotõ indigenous village and threatened residents, which forced them to flee to the nearby Mariry indigenous village, according to Apina.

The indigenous villages where the alleged crimes took place are part of the Wajãpi indigenous reserve, an area of about 6,000 square kilometres (2,317 square miles), rich in gold and other minerals demarcated as a protected area in 1996. Half of its territory lies within the National Copper and Associates reserve (RENCA), which former President Michel Temer tried to abolish in September 2017. But Temer was forced to step back from his decision after international outcry accused him of selling out the Amazon to foreign mining interests.

The Federal Police and Federal Prosecutor’s Office in Amapá have launched inquiries into the events inside the Wajãpi reserve, following violence claims publicized by Senator Randolfe Rodrigues on social media. After receiving requests for help from indigenous groups, Rodrigues demanded immediate action from authorities to prevent further direct confrontation between the invaders and indigenous communities.

“We are in danger. We urged the Army and the Federal Police to help us. If no help is sent soon, we’ll need to act ourselves,” said Jawaruwa Wajãpi, an indigenous city councilor in Amapá state, in an audio message sent to Rodrigues. 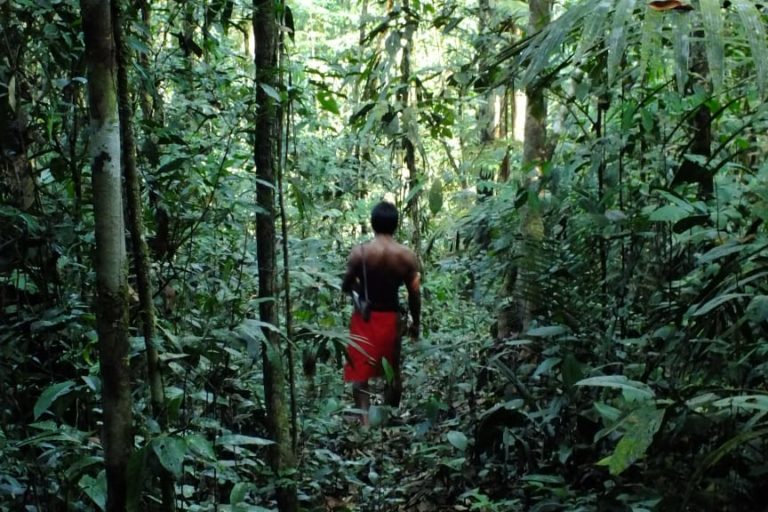 Jawaruwa Wajãpi, an indigenous city councilor in Amapá state, hunts in the Okakai region, in 2012. He reported the violence in the Wajãpi indigenous reserve. Photo: Bruno Caporrino

The senator acknowledged that this is the first violent invasion of the Wajãpi reserve since it was demarcated in 1996. “We have to unite in order to avoid the bloodbath that is about to happen. We have been in contact with the indigenous leaders to ask them not to retaliate before government security forces arrive,” said Rodrigues.

FUNAI, Brazil’s indigenous affairs agency, said in a statement that its officials are on the ground investigating both cases, along with agents from the Federal Police and the Special Police Operations Battalion (BOPE) of the Military Police of Amapá.

According to FUNAI, a federal and state task force has been created to investigate indigenous conflicts in the region. However, the Federal Police’s latest report said that “there is no indication, so far, of the presence of armed group(s) in the area.” FUNAI noted that a detailed report will be forthcoming.

Also read: How a Hunting Boom Left the Amazon Basin With ‘Empty Rivers’

Far-right President Jair Bolsonaro, who had not commented on the killing and invasion until Monday morning, told the Folha de São Paulo newspaper then that “there is no strong evidence” that the indigenous leader was murdered: “I will seek to unravel the case and show the truth about that,” Bolsonaro said.

However, in a previous statement, FUNAI had said that the presence of invaders “is real and that tension… in the region is high” and asked the Wajãpi not to approach the non-indigenous invaders in order to avoid exacerbating the conflict.

In its latest statement, Apina said that when police teams arrived at the Mariry and Yvytotõ villages, there were no invaders present, just their traces. “The police marked the points [using] GPS and took pictures…. [but] the police said they could not look for the invaders in the forest,” Apina reported, adding that the police then returned to Amapá’s capital, Macapá. Brazil’s President Jair Bolsonaro and his wife Michelle wave as they drive past before his swear-in ceremony, in Brasilia, Brazil January 1, 2019. Credit: Reuters/Ricardo Moraes

The violence in Amapá came as president Jair Bolsonaro continues pressing for the legalization of mining and agribusiness operations within protected indigenous reserves.

On July 27, Bolsonaro said he plans to appoint his son, Eduardo Bolsonaro, as Brazil’s US ambassador so that he can attract investment from the United States to explore for minerals in indigenous territories. Last week, during a visit to Manaus, the president reasserted his goal of legalising mining, despite the contamination and deforestation damage it has done to several indigenous reserves, including the territories of the Yanomami (in Roraima and Amazonas states), the Munduruku (in Pará), and the Cinta-larga people (in Rondônia).

Kleber Karipuna, a representative of the National Articulation of the Indigenous Peoples of Brazil (APIB), asserted a direct correlation between the invasion and the policies of the federal government. “The conflicts we see are related to everything this government has been doing in terms of indigenous rights, both in words and in action. When it encourages the population to bear guns, for example, it also encourages confrontation and the killing of indigenous people.”

According to anthropologist Bruno Caporrino, who worked as an advisor in a research program with the Wajãpi people from 2009 to 2016, the indigenous group had been monitoring the presence of miners inside their territory, but up to now the incursions were occasional and discrete. In his view, the recent crimes may point to an alarming new trend whereby the invaders aim to send the following message: “From now on, this is how we are going to operate. With the endorsement of the State.”