Meet the Wasp That Sniffs With Its Bum

Scientists from IISc, Bengaluru, performed experiments to highlight how a parasitic wasp's egg-laying appendage is like a sophisticated sensor. 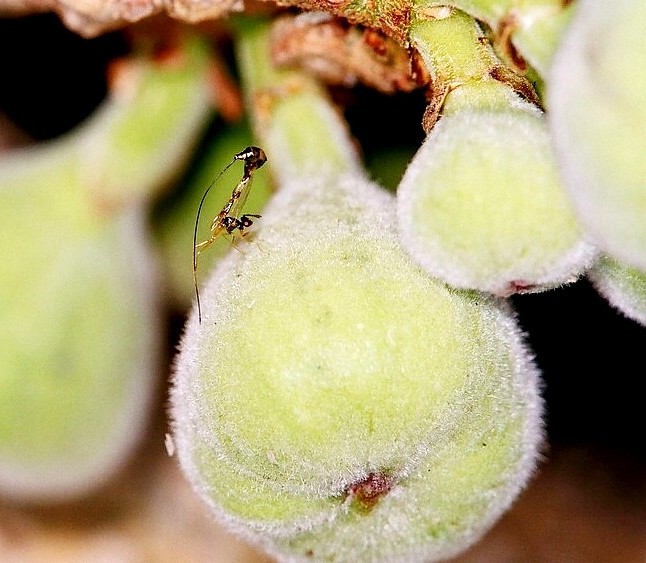 A wasp drilling into a fig. Credit: Pratibha Yadav

The parasitic wasp injects its eggs inside the larvae of another wasp. But its quarry is buried deep within a fig. How does the mother wasp know where grubs are hidden? Scientists at the Indian Institute of Science (IISc), Bengaluru, found the answer in the parasitic wasp’s ovipositor.

The fig isn’t actually a fruit. It’s an inverted bunch of flowers that goes by the name of syconia. When the flowers are ready to be pollinated, they give off a perfume that attracts pollinating wasps. The female wasp squeezes herself through a small aperture in the flower-bulb, often losing her wings. She stumbles around in the dark interior of the bed of flowers, pollinating the flowers with pollen stuck to her body. She isn’t in a quest for nectar. Instead, she lays her eggs in the tiny flowers. Job accomplished, she dies and the fig absorbs her remains. The flowers encase the eggs in a hard round fluid-filled gall within which the larvae develop.

Figs attract many other species of wasps that also turn them into a nursery for their progeny. But these are not the kind to give up their lives after shimmying through tight spots. Their egg-laying organ – the ovipositor – is long, serrated and needle-like. The wasps bore through developing figs with these sharp appendages until they reach into the flowers, where they lay their eggs. When the insects extricate their ovipositors, a sheath encloses it. These galler wasps are parasites of the fig tree since they suck nourishment from it without offering any benefits.

But the fig trees aren’t helpless. They also host parasitic wasps that seek the soft bodies of galler wasp grub to lay their eggs. Like the galler wasp, they also drill through the syconia. The parasitic wasp Apocrypta westwoodi bores through cluster figs anywhere between half an hour to an hour. For greater efficiency, its ovipositor is reinforced with zinc. Other species harden their appendages with calcium and manganese. But they can’t lay their eggs anywhere within the syconia randomly because their progeny have to eat as soon as they hatch. Nor are their larvae mobile enough to hunt for their gall-bound hosts themselves. Once inside the syconia, the ovipositors manoeuver around flowers and the galls of different species of wasps, seeking the right galls for their eggs.

Pratibha Yadav and Renee Borges, of the IISc, discovered that the parasitic wasps’ ovipositors have olfactory sense receptors called sensilla that smell carbon dioxide. The larvae developing within the fig exhale the gas and give themselves away.

Unlike antennae that have hundreds to thousands of receptors, ovipositors have a few that are smaller in size. Pollinator wasps have only three since they can see what they are doing while galler wasps have 17. These receptors, located at the tip of the ovipositor, are sunken within pits to protect them.

Yadav collected ripe cluster figs (Ficus racemosa) from the verdant campus of the institute. The first to emerge were the male pollinator wasps (Ceratosolen fusciceps) that chewed a pathway out of their dark nursery. Female pollinator wasps, galler wasps and parasitic wasps crawled through this fruity tunnel to freedom at the same time. The researcher captured the wasps as they emerged.

After removing the ovipositors of westwoodi and the galler wasp Sycophaga fusca, Yadav mounted them on an electrode.

When herbivores attack, plants release a blend of volatiles to alert others of the danger. Similarly, figs give off a specific scent when wasps puncture them. (E)-β-ocimene is one compound in that blend of volatiles. When Yadav blew the scent on the galler wasp’s ovipositor, it gravitated towards the pipette.

However, the parasitic wasp’s ovipositor didn’t react to the smell since it lays its eggs long after the pollination phase. But it drew close to the pipette tip when Yadav blew carbon dioxide at a fraction of the concentration found within a fig.

In an additional behavioural experiment, the researcher coated live parasitic wasps’ antennae with silicone so the insects couldn’t smell with them. Then she blew a minuscule amount of carbon dioxide through a tiny pipette for 2 minutes. Many A. westwoodi wasps landed on the pipette’s tip, but only a few landed when the researcher blew plain air. These experiments highlight how the parasitic wasp’s ovipositor is attracted to carbon dioxide.

The needle-like appendage is a sophisticated sensor. At least six species of wasps could be developing within a fig, each exhaling carbon dioxide. As far as the researchers know westwoodi injects its eggs in the larvae of only two species: Sycophaga testacea and Sycophaga stratheni.

How does it locate its target within the gas suffused atmosphere of the fig? “We expect A. westwoodi‘s ovipositor to use carbon dioxide as a cue,” Yadav told The Wire.

Not only do the various species of wasps breathe out different levels of carbon dioxide, each stage of a wasp’s development – from grub to pupa – may release varying degrees. By sensing these differences with its sensilla-embedded ovipositor, A. westwoodi locates the grubs that will become prey for its own progeny.

“It may also use other chemical cues such as the surface hydrocarbon profile of different galls,” says Yadav.

Studying ovipositors that are three to seven millimetres long and finer than human hair demands ingenuity. Besides, they have no more than 20 chemo-sensory sensilla. “The biggest challenge was obtaining electrophysiological recordings from the extremely thin ovipositors,” according to Yadav. “We modified a set-up used to record olfactory responses from insect antennae. Therefore, this was technically extremely difficult. We also experimented with various ways of amplifying the faint signals and improving the signal to noise ratio.”

Despite the difficulty in studying such minute subjects, Yadav has set herself an even more demanding goal. “We would like to record responses from a single sensillum in addition to studying its internal structure,” she says. “We would also like to know the location of the processing centre for olfactory information perceived by the ovipositor, which is unlikely to be the brain, but is probably a posterior ganglion in the nerve cord.”

The researchers predict “olfactory sensilla will occur on ovipositors of insects that are completely dependent on their ovipositor to locate hidden hosts.”

The study was published in the Journal of Experimental Biology on May 4, 2017.