Many Lizards Aren't Dumb but If Their Embryos Were Colder, They Might Be Smarter

Bearded dragons that had been incubated at a colder temperature were able to learn a trick faster and more often than those incubated in warmer climes.

Bearded dragons learn to solve problems by watching others. Credit: Sophie A. Moszuti 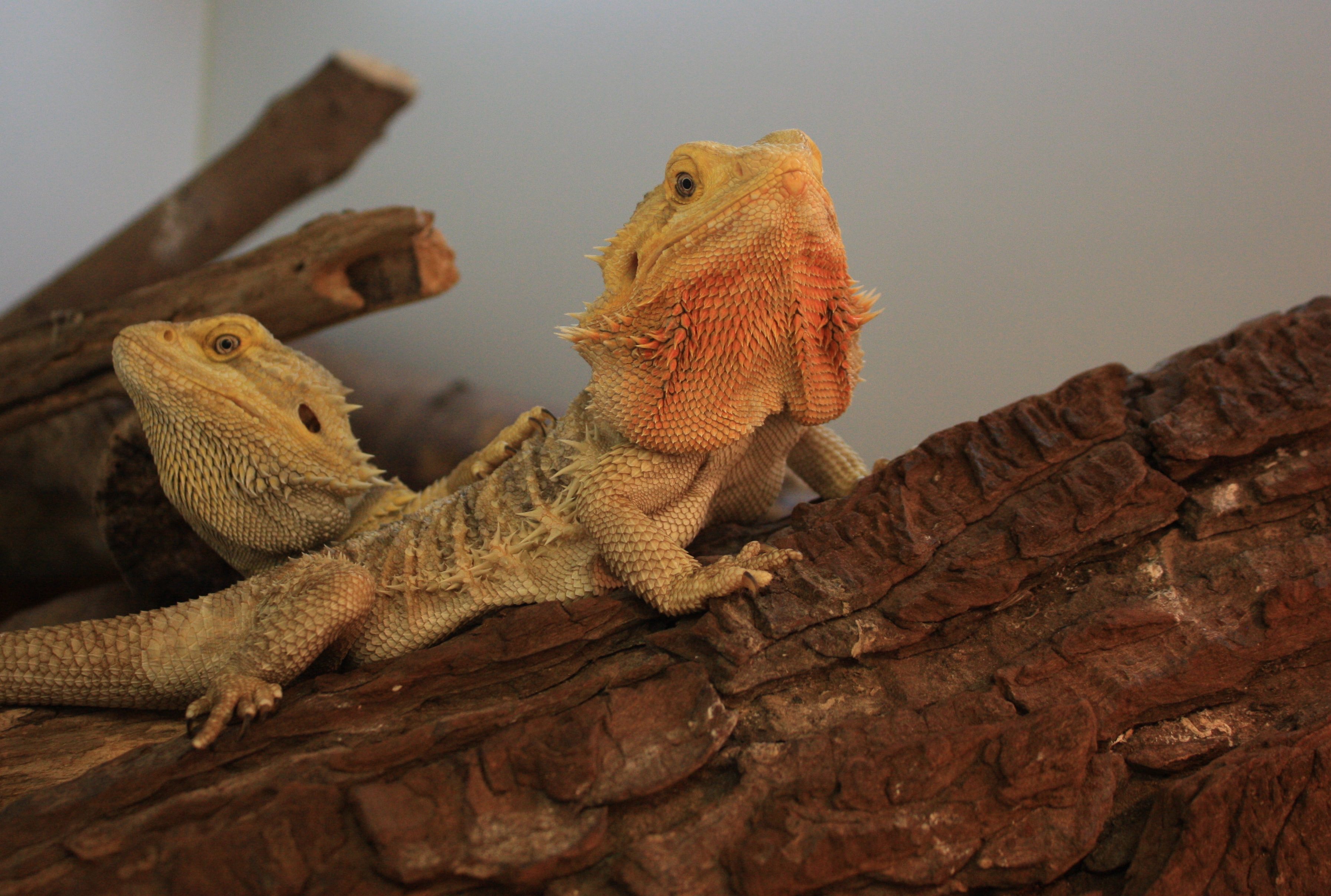 Bearded dragons learn to solve problems by watching others. Credit: Sophie A. Moszuti

Egg-laying reptiles, except some pythons, don’t incubate their eggs. They bury their chalk-encased embryos underground or in a thick pile of leaves. The Sun baking the ground or rotting vegetation is enough to nurture developing embryos. Environmental temperature even assigns gender at a critical time in the incubation process since many species lack sex chromosomes. In recent years, scientists have been discovering the outsized role temperature plays in reptilian lives.

Incubation temperature shapes the brain of three-lined skinks (Bassiana duperreyi). Hatchlings incubated at warmer temperatures, called ‘hot’ hereafter, had a greater density of neurons and more of them in specific regions. On the other hand, those bred in cooler conditions, called ‘cold’, had larger forebrains.

Higher temperatures turned out larger and heavier skink hatchlings that ran faster and learned quicker. Another study found that the hot hatchlings of a different species, the velvet gecko (Amalosia lesueurii), were slow learners and poor survivors.

These studies focused on youngsters. When the animals reached adulthood, did they continue to have the advantages of speed, size, weight and longevity? Do conditions that shape embryos affect adult behaviour? Very few studies have tracked these changes over time.

Anna Wilkinson from the UK’s University of Lincoln and her colleagues studied the effects of incubation temperature on personality. Hot bearded dragon hatchlings were bolder. But as they grew older, they lost some of their audacity even as their cold siblings became more brazen. In an unpublished study cited by the researchers, any growth advantage that hot hatchlings had also disappeared with age as cold ones began to put on weight faster.

Could temperature affect their cognitive abilities? If the shape of young skinks’ brains could change, then their functions could also be altered.

Wilkinson and her colleagues from the University of Lincoln and Utrecht University, the Netherlands, studied central bearded dragons (Pogona vitticeps). Within a narrow range of temperature, sex chromosomes decide the sex of the offspring with an even hand.

The team divided 13 eggs of one pair of parents into two groups and incubated each at different temperatures within this temperature band. One batch got the hot treatment and the other, cold. When the hatchlings reached adulthood, the researchers tested one part of cognition. Do the lizards take cues and learn new tricks by watching others?

Before Wilkinson and her colleagues began the study, they weren’t sure what to expect. “We have found that cold incubated animals were better at asocial learning [unpublished study] and as such, we predicted that we would see similar effect in social learning,” she says. 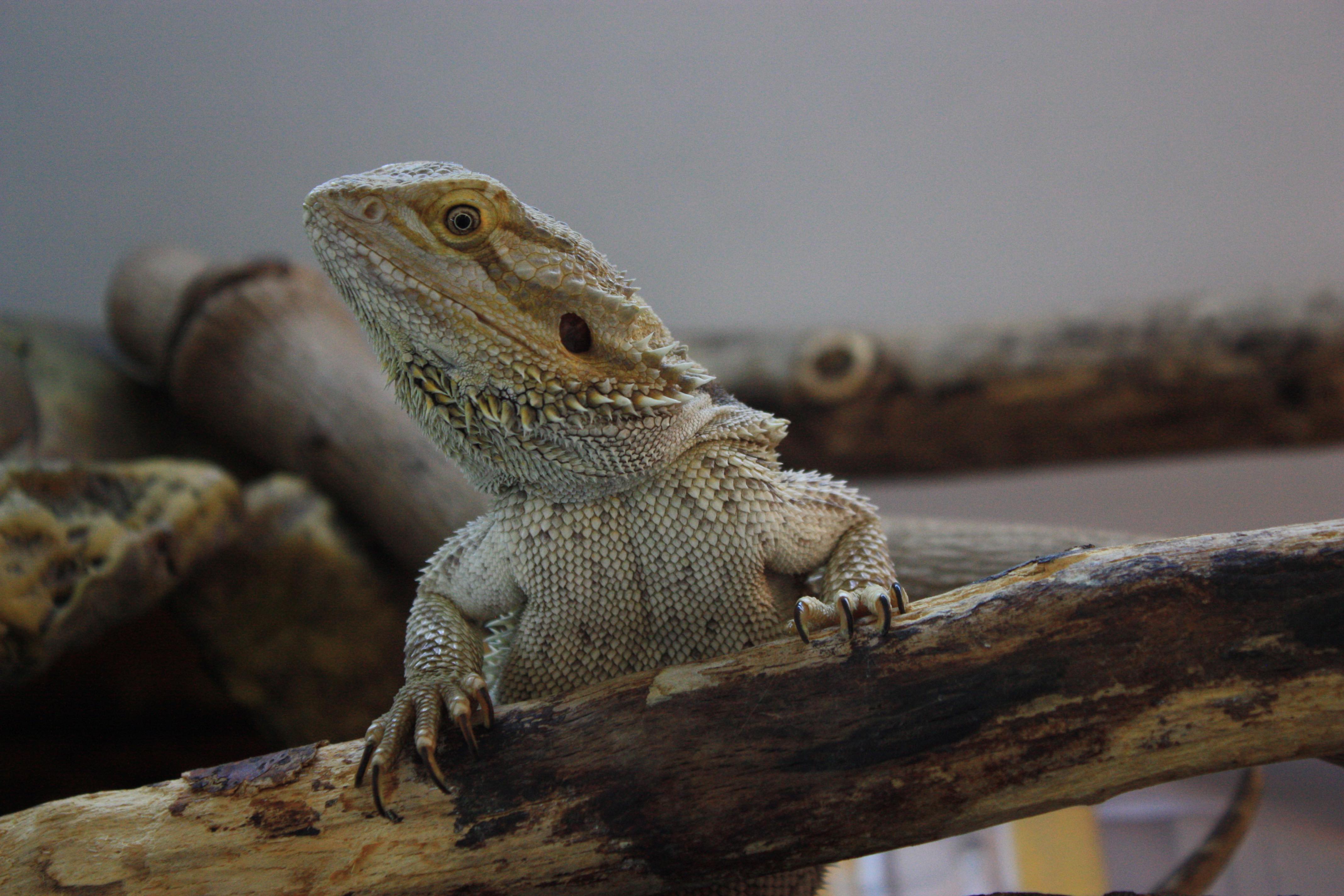 Bearded dragons can follow the gaze of another, showing social intelligence. Credit: Sophie A. Moszuti

The choice of bearded dragons for a study on social cognition is odd, as Maria Thaker points out. Scientists don’t typically consider the lizards to be social animals. “They are regular territorial lizards that may not have an opportunity to closely watch others in the wild,” she says. “Why would social learning be relevant for a territorial agamid?” An assistant professor at the Indian Institute of Science, Bengaluru, Thaker was not involved in the study.

“There is now impressive evidence of learning in a number of reptile species,” Wilkinson told The Wire. “We have recently shown that red-footed tortoises can remember learned responses for 18 months, and bearded dragons are able to imitate the actions of another lizard – something thought to be unique to humans and great apes a few decades ago.”

Wilkinson and her colleagues chose bearded dragons for the study because, unlike other lizards, they watch videos, which makes them ideal candidates for this innovative experiment. The researchers recorded an unrelated dragon looking upwards or to the side and played the video recording to the experiment’s 13 subjects.

Gaze-following is a classic test scientists use to assess social intelligence in animals. One has to interpret the other’s face and eyes, and realise what it may be seeing could be an advantage, revealing a source of food or the presence of a predator.

When watching the video playback, all the 13 turned in the direction the bearded dragon on the screen looked. But they didn’t look upwards or to the sides, when the demonstrating lizard looked straight ahead. Clearly temperature didn’t curb their curiosity to know what the other was seeing.

The researchers pushed the animals further. They blocked a part of the enclosure and played the videos again. To follow the gaze of the recorded lizard, the bearded dragons would have to walk around the barrier. None of the lizards realised that the screen obstructed their line of sight. Perhaps this level of reasoning is beyond the scope of bearded dragon intelligence. So far, only primate, crow and dog families have shown this complexity of understanding.

In the last part of the experiment, the researchers tested if the lizards could solve a problem by watching and learning from another. This is faster and easier than trial and error.

They played a video of a dragon sliding a screen door open to reach a mealworm. Then they placed the 13 lizards in turn in a similar experimental setup and gave them five minutes to figure it out. If the reptiles mimicked the lizard in the video, they were capable of social learning.

“We had previously shown that lizards can only solve this task if they have watched another lizard do so,” says Wilkinson. “Therefore, we felt it was the ideal experiment to test differences in social learning under different incubation conditions.” 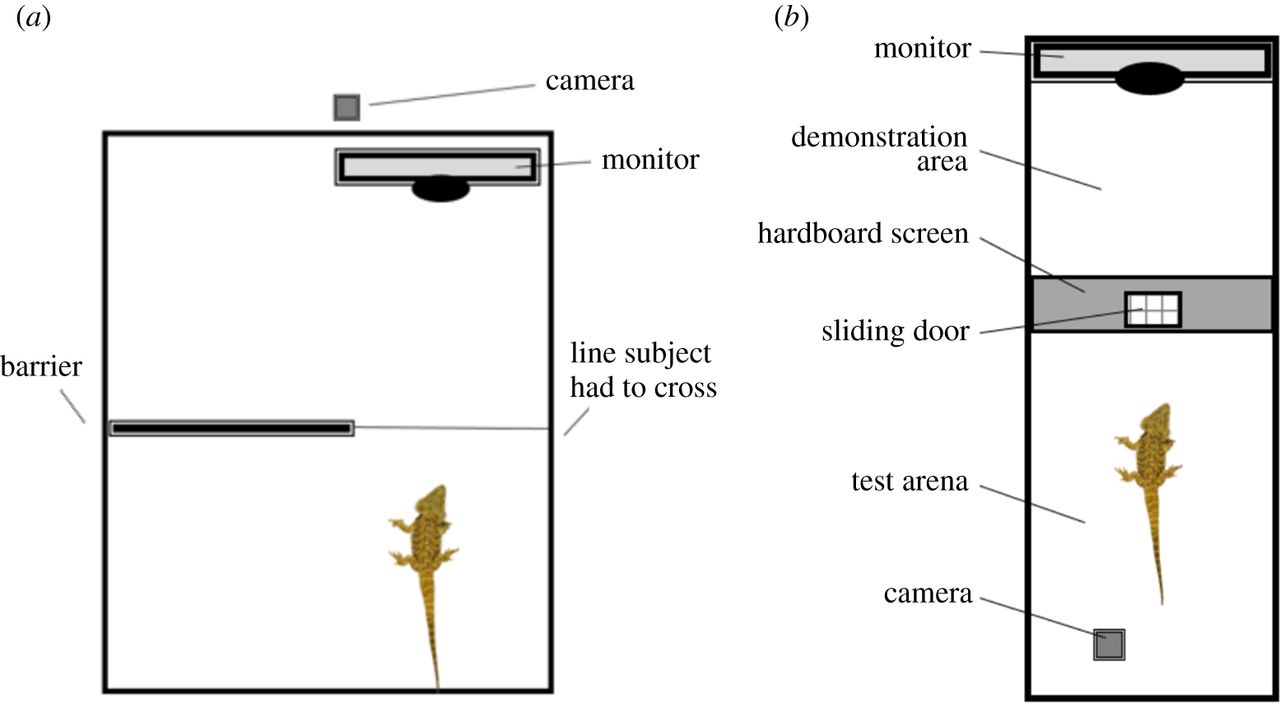 Plan of the experimental arena for (a) the gaze following experiment (left panel) and (b) the social learning experiment. Credit: Sophie A. Moszuti

“Very few people have successfully tested social learning and gaze following in lizards,” says Thaker. “Although we may argue about how relevant these behaviours are for a generally non-social animal, the methods to test these behavioural responses are great.”

The cold animals of the 13 had an edge, learning the trick faster and opening the sliding door more times than the hot ones.

“If your environment is colder, an ectotherm like these lizards will be moving around less and will have less opportunity/time to maximise the use of their environment (fewer hours that are warm enough and within operative temperature conditions),” says Thaker. “Maybe then, there is less time to independently learn about the world and social learning comes in handy. I have no idea if this is the case, but I’m certainly looking forward to the next generation of papers that examine multiple cognitive axes [functions] in the same individual. Only then will we understand the learning brain. I do think that we need to get a handle on how animals are going to respond to temperature changes in their world.”

Martin Whiting, an associate professor at Macquarie University, Australia, says the study is an “important early contribution to our understanding of the thermal environment’s influence on learning ability.” He thinks in future, studies using many more lizards would help us understand how warmth influences learning and what those temperature thresholds are. Whiting studied the effects of high incubation temperatures on three-lined skinks and wasn’t involved in this study.

How does one reconcile the contradictions in the performance of bearded dragons, velvet geckos and three-lined skinks? They are representatives of three different reptilian groups and could respond in various ways to heat.

“We don’t really have enough studies to establish any kind of pattern at this stage,” says Whiting. “Their study highlights the need to conduct similar studies on a greater range of species from across the lizard phylogeny (evolutionary tree) in order to establish whether there are general patterns. It is certainly an intriguing difference, though.”

Thaker felt such experiments although elegant seldom mimic the real world. “Every individual in every population will face a different incubation temperature and so our understanding of a ‘hot’ world and a ‘cold’ world is still far from realistic. Will dramatic changes in development occur at threshold shifts in temperature? Or will we find socially inept lizards in a warming world? I am resisting the urge to compare the social ineptness of humans in a warming world – that is a different study altogether!”

Until recently, no one would have thought to test cognition in reptiles. They are slow and sluggish and thought to be dumb. Studies like these are beginning to reveal these animals may be smarter than they look.

The study was published in the journal Royal Society Open Science on November 22, 2017.