For the First Time in Years, Maharashtra's Drought-Affected Region Is Green

An annual watershed management contest by Paani Foundation has also helped create jobs and control migration in the region. 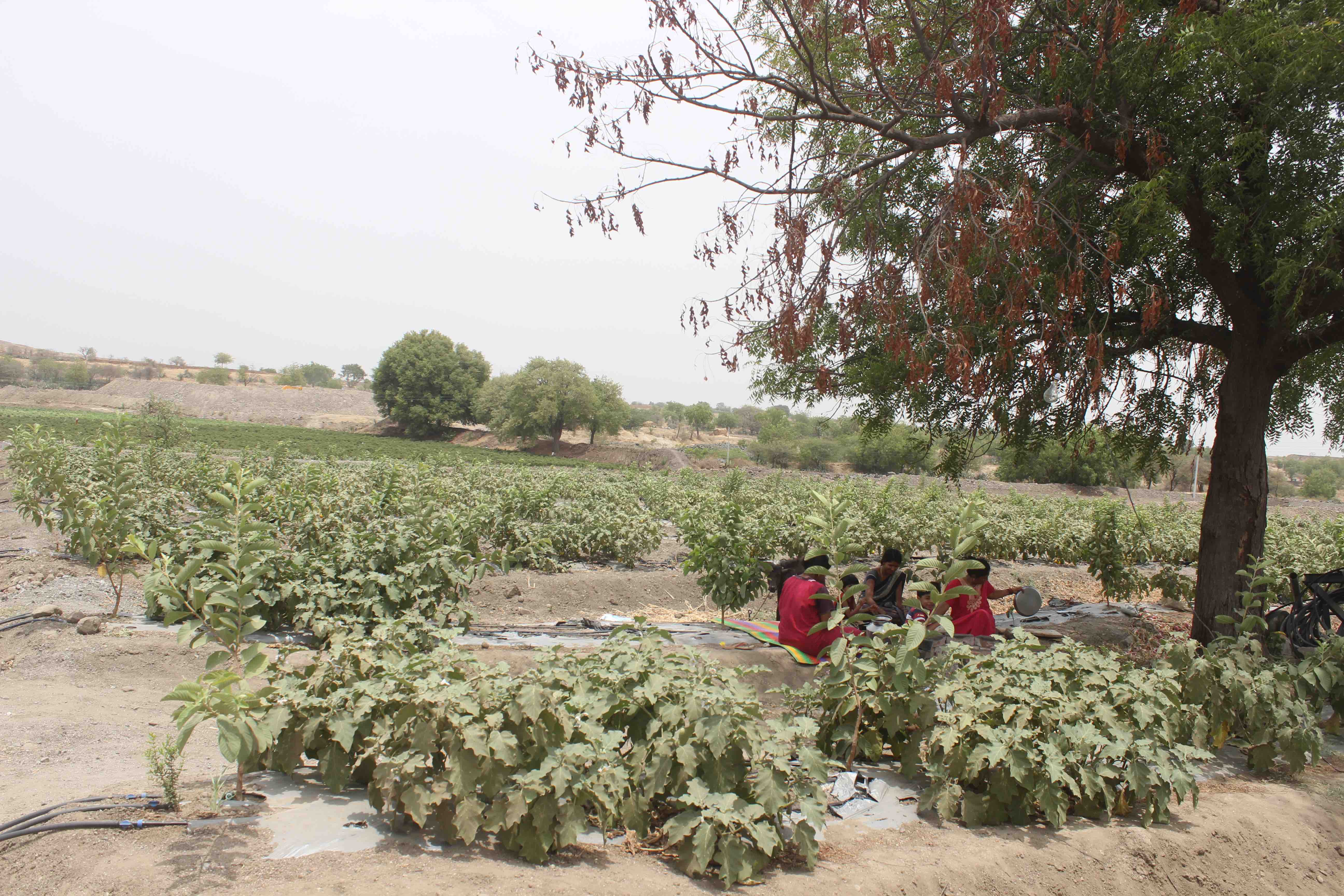 Pune: “In this kharif season at the peak of summer, my two-acre farm is pretty green with crops – groundnuts, maize and fodder for animals. Since I came to this village after my marriage in 2002, every summer would begin with waiting for water tankers to get water to drink and for daily use. Farming in summer was not an option,” said Swati Waghmode, a resident of the Sule hamlet in Waghmode Wadi village. The village is in Mann taluka of Satara district, 250 km from Mumbai – a region known for severe droughts.

However, residents of four hamlets that are 4-5 km apart in this village spread over 531 hectares are not as lucky as those in Sule – because all their wells and borewells have dried up. And over 1,000 residents depend on the few buckets of water they receive through tankers arranged by the gram panchayat.

Sule hamlet lies at one end of a hill which has Pingali village at another end. Pingali was a participant in the Satyamev Jayate Water Cup 2017, a yearly competition held by the Paani Foundation. To win the cup, villagers have to do physical work for watershed management and water conservation during the fixed days of the competition. Villagers are expected to do shramdan and can take the help of machines.

The story of Karkhel is somewhat similar. During the competition last year, the village worked on 25% of its total area of 1,604 hectares, creating a space for two lakh sq millilitres of water.

Ramesh Gaikwad, the sarpanch of Karkhel, said, “Over 500 hectares of the land is green with groundnut, various vegetables and fodder at this time of summer. Almost all wells and borewells that generally get dry by February every year have water. Unlike other years, not a single tanker has been needed till now, and we will not need it till monsoon starts. Otherwise, we would require four tankers daily – that would cost Rs 8,000 per day. It was a big headache to keep requesting at the collector’s offices, MLAs for additional funding for water in summer.”

The astounding results have pushed the village to spread their work to 100% of the land for Water Cup 2018. Chandrakanta Gisge, a 50-year-old whose husband died while taking out water from a well during the summer of 2002, said, “I have seen the worst of the drought, and hence I along with other women have been doing shramdan even in the evenings.” Villagers are supposed to work only during the morning shift for this cup. 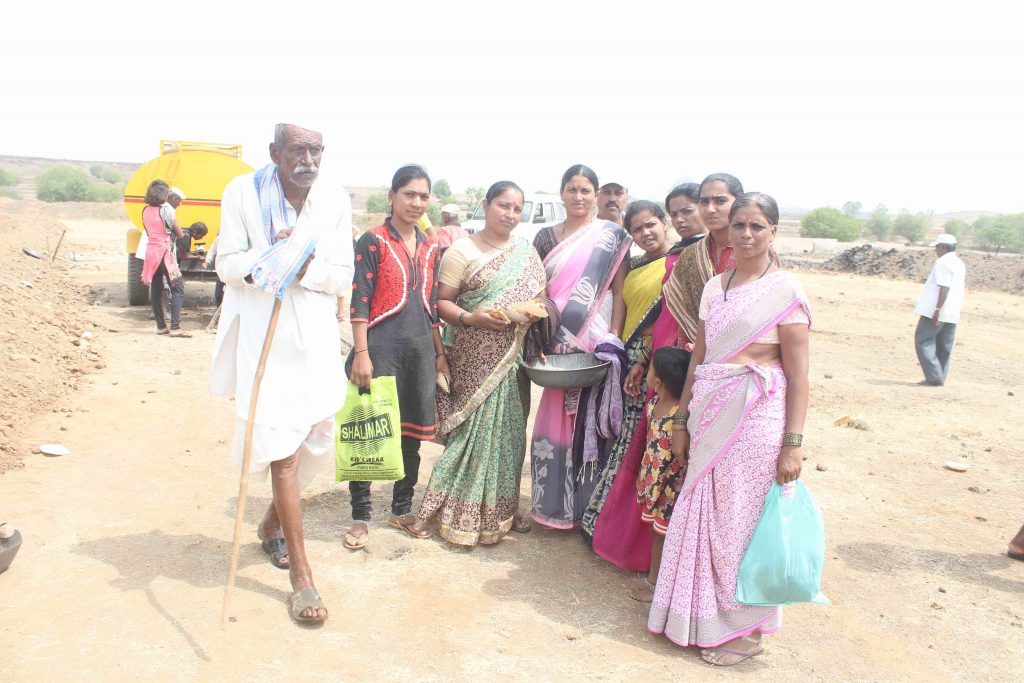 Residents of Sule describe the issues they face due to lack of water. Credit: Varsha Torgalkar

Over 25 people from the village would daily go to nearby villages for work until last year since during summer, the village would have no jobs. But this year, due to the crop, there are jobs available in the village. Gaikwad pointed out, “This year no additional resident had to go to other villages for work daily. We are hopeful that over 100 shepherds who every summer travel towards the greener part in Pune or Latur and return to the village by monsoon shouldn’t have to go to other villages. If water gets recharged through the land, there will be enough greenery for the sheep.”

The Water Cup began in 2016 on a pilot basis, when 30 villages from three talukas participated. Due to the positive results, Paani Foundation held the competition on a large scale in 2017. Last year, 1,331 villages from 30 talukas of 13 districts of three drought-affected regions – Vidarbha, Marathwada and western Maharashtra – participated in the competition. Overall, 8,261 crore litres of water capacity was created. This has benefited over 20 lakh people directly or indirectly.

For the 2018 competition, 4,025 villages from 75 talukas from 24 districts of four regions are competing. The region comprises nearly 90% of the drought-prone area of the state.

Meanwhile, a few geologists have criticised the work of water recharge being done by several organisations, including the Paani Foundation. They feel that digging without study can harm the geology and ecology of the area. Raymond Duraiswami, a geologist at Savitribai Phule Pune University, said, “To carry out work of watershed management, we need do a hydro-geological survey of the area, otherwise that can be counter-productive. There are theories that work done without a study of the area can be harmful to ecology and geology of that area.”

Satyajit Bhatkal, CEO, Paani Foundation, however, said, “Paani Foundation is a people’s movement and farmers and villagers are leading the work. They are trained with scientific methods of marking the area considering contour line, slopes and bushes and trees. The work is done understanding geology of that area. Farmers and villagers know the geology of their villages in the best possible way. This is the work done by the people and for the people at such a large scale in 4,000 villages for over 70 lakh people. A few things can go wrong, I don’t deny it. But I request those geologists and scientists to come forward with their suggestions.”

Satish Madake, the deputy sarpanch of Waghmode Wadi, said, “There will be a section of people criticising any good work. Why did these geologists or scientists not come forward for many years when lakhs of people were committing suicide and suffering due to severe droughts? We are benefitting from the work of Paani Foundation and that is what matters.”