The film ignores the contributions of non-white people to climate justice.

A still from the film 'Ice on Fire'. Credit: Twitter/@HBO

The Rowan Institute, an American think-tank, issued a sharply worded statement on June 12 condemning what has essentially been a sustained effort by the west to whitewash the war against the climate crisis. The statement, triggered by the release of the HBO film Ice on Fire, focused on what it called the erasure of the contributions of black, American indigenous and other people of colour, and highlights the fallacy of what its writers call ‘the white saviour complex’ in spite of common knowledge that white people have been most responsible for the crisis.

“The white saviour complex is a social artefact of colonial history, it assumes the global south’s inferiority and their consent for white saviourhood, which is both harmful and intellectually bankrupt,” the statement, lauded by many for its crisp phrasing, read.

Ice on Fire is a 91-minute documentary on the climate crisis directed by Leila Connors and produced and narrated by actor Leonardo DiCaprio. A big budget production with an opening at the Cannes Film Festival, the film has been credited at once with being predictable and offering hope in the form of viable solutions to beat the global emergency.

DiCaprio himself is an avowed environmentalist (his Twitter bio says as much) and had produced his first film on the issue, a call-to-action documentary called The 11th Hour, with pretty much the same team, back in 2007.

#IceOnFire is now streaming on @HBODocs. I hope audiences will be inspired to take action to protect our planet. Special thank you to director @Leilaconners and everyone that helped bring this project to life. pic.twitter.com/cxqNQ2wwOi

“What makes the film different is that 11 years after The 11th Hour, we now know how to fix the climate change problem, so why don’t we just do it?” the film asks in its official summary, featured on the Cannes website.

The film is unsurprisingly grand, with a strength of purpose that reviews say is emboldened by sweeping drone shots of rapidly disappearing land and greenery. Yet in its approach, it seems to have corresponded to the same narrative of erasure that coloured champions of climate justice have been used to.

As the Rowan Institute’s statement notes, the film ignores the contributions of non-white people in the field as well as fails to highlight “the leadership or scholarship of a single black, indigenous, or other women of colour, despite the fact that such women of colour are leading the global frontlines of climate justice movements.”

The lack of representation also corresponds to a larger problem of the Global South being posited as a landmass that needs to be saved by the white. This further increases focus on the narrative that climate change is something that agents of western colonialism can protect us from, instead of the idea that beating this grave threat require everyone from around the world to chip in.

Moreover, as the statement highlights, considering that climate change can almost directly be credited to the actions of Western corporations, it is not saving that the Global South requires as much as concentrated pressure on western governments to decarbonise and reduce their culpability in the steady escalation of global heating at once. It is unjust that the people who have led the world to this point now pretend to play saviour.

In 2016, nine members of the group Black Lives Matter ran on the runway at London’s City Airport and chained themselves together to protest the disproportionate effect of climate change on people of colour across the world. The protesters, The Guardian had reported, had called the climate crisis a ‘racist crisis’. 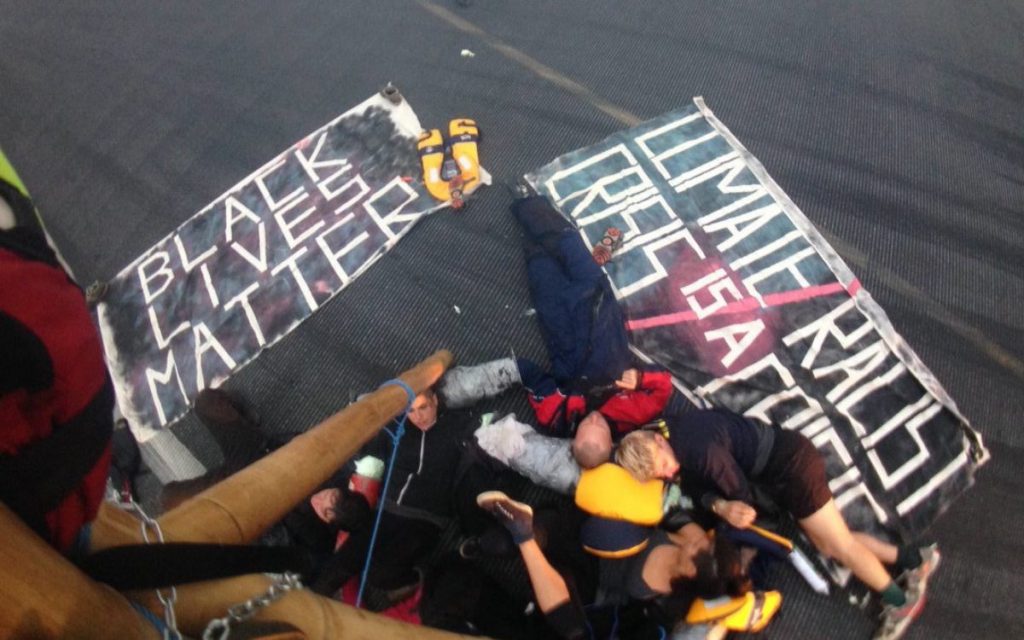 Though the climate justice movement boasts of a diverse leadership, observers said focus on contribution by a small group of white men and women, especially by a film as large in reach as Ice on Fire, only furthers exclusion.

Long before a film produced by a multimillionaire, Oscar-winning and white actor was enjoying widespread visibility with a claim to offering the way out of climate crisis, the magazine Gal Dem noted that environmental justice groups like the Indigenous Environmental Network, Global Grassroots Justice Alliance and the Climate Justice Alliance centre had been eager to focus on traditional ecological knowhow and century-old grassroots-level solutions to climatic emergencies.

In comparison, a white-majority civil disobedience group headquartered in England and aiming to fight climate change, called Extinction Rebellion, has repeatedly grabbed headlines in the seven months since its formation, thanks to its its members’ primary objective to get arrested. The group focuses on rhetoric that has been labelled tone deaf because it doesn’t recognise that while its members festively court arrest, persons of colour have little choice in the matter.

Also read: Climate Change and an Extinct Mouse: Lessons for the Himalayas

The media coverage of Extinction Rebellion is also at odds with the relative silence about grassroots campaigns across the world, including in India.

A 2013 report in Grist noted that whitewashing the climate justice movement has a wider repercussion in the form of smaller environmental justice groups ending up with “a fraction of the funding that the big groups receive”.

In 2015, a London march against climate change organised by the likes of ITV and BBC was supposed to be led by the group The Wretched of the Earth, which represented communities of colour on the frontlines of climate change. At the last moment, the decision was reversed, leading to questions of racism arising anew within the movement.

In 2013, Washington Post reported the palpable lack of diversity in the US’s environment justice groups. It highlighted a case study of Waterkeeper Alliance, a New York organisation, where one Fred Tutman was the only black ‘riverkeeper’ among 200 charged by the group with protecting the country’s rivers.

Instances of white people laying claim to land, people and resources are not new – a fact an Ugandan man in London recalled when he ‘discovered’ the city’s Thames river and named it Gulu, like the colonialists of yore had done to more than half the world.