In a mental landscape increasingly dominated by the ephemeral nature of ‘Breaking News’, Larsen C exemplifies a global warming trait difficult to get our heads around. 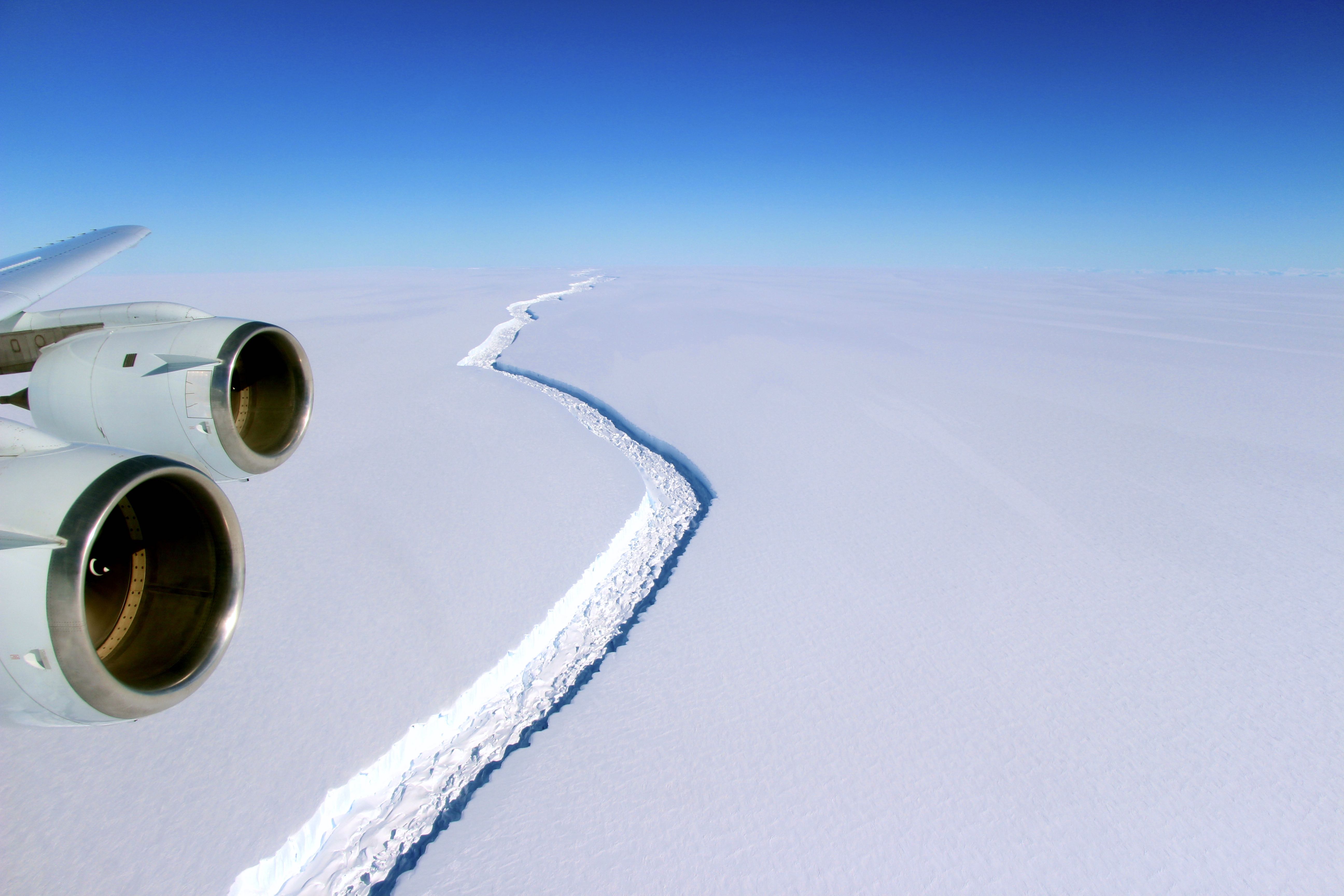 Note: This story was first published on March 28, 2017 and is being republished on July 12, 2017 in light of news that a trillion-tonne iceberg has broken off the Larsen C ice shelf.

Half a planet away from the immediacy of politics that dominates our headlines, there’s a crisis unfolding that can dog us for centuries. In West Antarctica, a huge ice shelf called Larsen C has developed a rift 175 kilometres long and half-a-kilometre wide. A chunk of the shelf is poised to break off soon. When that happens, the ‘chunk’ will be an iceberg over 5,000 sq. km across and 350m high – more than four times the height of Delhi’s Qutub Minar and over an area one-and-a-half times the size of Goa. And we need to pay more attention because it could potentially gravely impact India’s people in the near and long term.

Ice shelves are extensions of ice sheets, are fed by their glaciers and jut hundreds of kilometres out to sea. Sprawled over 48,600 sq. km, Larsen C is a little larger than Haryana. It is Antarctica’s fourth-largest ice shelf and an extension of the gigantic West Antarctic Ice Sheet (WAIS). The rift in Larsen C has been growing, in recent weeks by several kilometres at a time.

The mammoth iceberg-to-be — let’s call it ‘Goa Plus’ — is currently attached to Larsen C by 20 kilometres of ice. It could break off entirely anytime in the next few months, weakening the ice shelf further. This happened to its now-extinct cousin Larsen B. In 1995, a large chunk of Larsen B broke off and B itself disintegrated spectacularly over a 35-day period in 2002.

Peer-reviewed research has yet to conclusively demonstrate that global warming is responsible for the accelerating rift in Larsen C, although background warming conditions have made that likely. Temperatures in the Antarctic Peninsula, where Larsen C is located, have been “rising at four to six times the global average,” according to the Intergovernmental Panel on Climate Change’s Fifth Assessment Report (5AR). Global warming also traps warmer subsurface ocean waters, because of which “climate change has caused a thinning of the [Larsen C] ice shelf,” the team studying it said last month.

But Larsen C’s disintegration will not occur next week. In a mental landscape increasingly dominated by mobile phones, tweets and the ephemeral nature of ‘Breaking News’, what’s happening to Larsen C illustrates a key trait about global warming that will take some effort to get our heads around. Many of its slower effects unfold over long periods. After the chunk broke off Larsen B in 1995, it kept getting smaller eventually disintegrating only seven years later.

Adrian Luckman, a professor of glaciology at the Swansea University, Wales, and project leader of the group studying Larsen C, wrote this author an email recently: “If the shelf continues to erode slowly after this calving event – as was the case with Larsen B – then it will be years until the remaining shelf is eroded far enough for a complete destabilisation.”

The vast WAIS, Klaus Dodds’s The Antarctic informs us, is ‘marine-based’: its base is below sea level. “Its edges transform into floating ice shelves.” So, Larsen C’s collapse will not by itself contribute to sea level rise as it is already floating in water. But the glaciers that feed into Larsen C can because, when an ice shelf gives way, these glaciers start to flow much faster into the sea.

“The collapse of Larsen B, which is unprecedented in the last 10,000 years, has resulted in a speeding up of the tributary glaciers by 300 to 800%,” says the 5AR. That’s not good news. Larsen C is five times as large as Larsen B was. The glaciers it holds back contain vastly more ice and, as has been reported, could contribute a sea-level rise of 10 cm.

And all this is part of an accelerating rise that may have already begun. Per the IPCC, the average rate of ice loss from Antarctica has increased from 30 billion tonnes a year over 1992-2001 to 147 billion tonnes a year over 2002-2011. Twentieth century sea level rise was linear, increasing in fixed steps, because its chief sources were ocean expansion due to warmer waters and glacial melting. It will happen at an exponentially growing rate this century because the main source will be the melting of, and faster ice flows from, the gigantic ice sheets on Greenland and Antarctica.

In a paper published last March, the renowned climate scientist James Hansen and others foresee a “non-linearly growing sea level rise, reaching several metres over a timescale of 50-150 years.”

Ten centimetres of average sea level rise from the collapse of Larsen C may not seem like much until we put that figure in perspective. It’s a little over half of all the sea level rise the world has already experienced since 1901. This should deeply concern us. Sea level rise in the Sunderbans is significantly higher than the global average thanks to its topography and that its land is subsiding. When a team this author was part of visited some islands in the Sunderbans a couple years ago, we spoke to numerous people whose earliest homes had since been swallowed under water. It was easy to meet people who had moved three or four times due to advancing erosion. There were also fragmented families, living around agricultural lands and water sources that had turned saline, and farmers being forced to migrate in the thousands.

Erosion and sea ingress are also happening on the coasts of Gujarat, Tamil Nadu and elsewhere. But an accelerating sea level rise will means that what is happening in Sunderbans today will occur all along India’s 7,500-km coastline tomorrow – with the potential to devastate coastal communities. The lives of millions of people will surely get affected by events that seem very distant.

Larsen B disintegrated in 2002. A 570-sq.-km chunk of the Wilkins ice shelf broke off in 2008. The 5,000-sq.-km ‘Goa Plus’ will break off Larsen C in 2017. These are early warning signs to which we should pay heed. These dramatic events provide much food for thought. They are for all practical purposes irreversible, and no one expects Larsen B to re-form in the foreseeable future and hold its glaciers in check once again.

We also need to internalise the long-term nature of the changes that are being wrought, such as ice sheet destabilisation in Antarctica and elsewhere. Individually and collectively, humans have become used to providing for our old age and thinking about the wellbeing of our next generation – but not beyond. Now, we need to reconsider how we think about global warming and its impact, which will continue to haunt many generations in India and around the world for centuries to come.

Nagraj Adve’s booklet Global Warming in the Indian Context has been translated into Hindi, Kannada and Tamil. He works and writes on issues related to global warming.