It has been proven time and again that large 'development' projects, involving the blasting of fragile hills and constraining the flow of rivers, cause huge loss of lives and livelihoods in the Himalayan region. 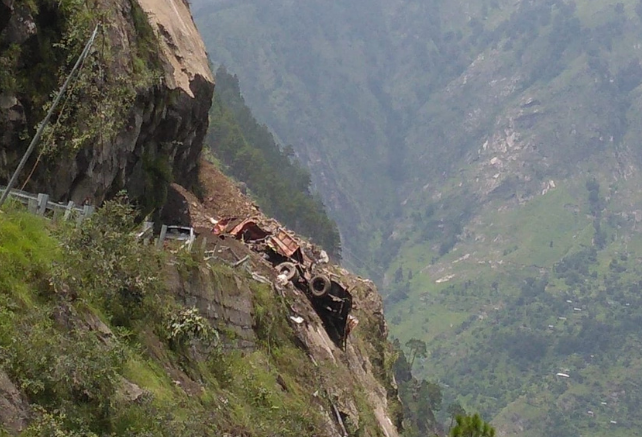 The landslide on the Reckong Peo- Shimla Highway in Kinnaur District in Himachal Pradesh. Photo: Twitter/@ITBP_official

Two big landslides in the Kinnaur district of Himachal Pradesh which made national headlines have re-emphasised the need for ecologically protective development in geologically fragile and vulnerable hills.

On August 11, a massive landslide on National Highway 5, near Nigulsari, led to the raining of boulders and rubble on several vehicles, including a bus. After eight days of challenging rescue efforts, 28 deaths and 14 injuries have been confirmed, although initial reports had stated that even more people may have been buried under debris.

Earlier on July 25, nine tourists died and three were injured as boulders crushed not just their vehicle but even an iron bridge on a small river in the Singla area. The force of the falling boulders was such that it destroyed the bridge within a matter of minutes, and a video of this which went viral has provided a chilling reminder of how destructive landslides in the Himalayan region can be.

While these bigger disasters make newspaper headlines, several smaller disasters have been making living and livelihood difficult for the locals.

Kinnaur district is a part of the Fifth Schedule Area with a large population of tribals and there is a need to provide more autonomy to the tribal communities. However, a development model marked by big hydel projects, tunnels and dams has not taken into account the real wishes and needs of people.

Soon after the latest disaster (August 11), the first DGP of Himachal Pradesh, 89-year-old I.B.Negi, known to be very well-informed about his native Kinnaur, told Amar Ujala (on August 12) that about 50 years ago the region did not experience the kind of disasters it is witnessing now, and they have become a common occurrence due to the blasting work taken up for hydel projects.

He said that a different model of small hydel power projects, seen in some ecologically fragile hill regions of Europe, would have been much better, but instead bigger projects with a blasting element involved were introduced, causing huge damage. “For some economic benefit, something much bigger and more valuable has been lost here,” he said.

Following a similar development model in the Lahaul-Spiti district will be even more harmful, and people there are rightly opposing this. Negi said the four-lane roads being planned here will also prove harmful, and it is better to concentrate on proper maintenance and repairs of existing roads instead.

The road constructed close to the Sutlej had already caused major damage earlier, resulting in several deaths, he recalled.

Amar Ujala also published the comments of a hydel power engineer and former senior official R.L. Jasta who has also stated that indiscriminate construction of hydel projects has caused receding of hills, causing enormous harm to the region. He instead called for Kinnaur to be declared an eco-sensitive zone.

Calling Sutlej the lifeline of Kinnaur, Jasta said that no one could have imagined several decades back that one day the river will have to find its flow constrained. He also warned that the Sutlej river and its tributaries were already over-saturated with hydel projects and no more should be permitted. “The hills here are fragile, so indiscriminate blasting for the projects has contributed in a big way to landslides,” he added.

The Shukla Committee Report on these projects should be followed, he said. This report has clearly said that no hydel project should be constructed above the tree line. There should be adequate distancing between one project and another.

Several local campaigns including ‘Save Kinnaur Abhiyan’ and ‘No Means No’ are coming forward to check the further spread of hydel projects in this region and many more villagers are now supporting them.

Geologists, among other experts, and activists have often emphasised the need for an ecologically protective development strategy in this region as the young and fragile formation of hills gets easily disrupted and destabilised by indiscriminate construction and mining work. In particular, the blasting work should be avoided.

Adequate care should be taken to protect trees and natural springs which are also important for promoting and protecting sustainable livelihoods here. In particular, the beautiful Sutlej river and its numerous tributaries should be well-protected, besides caring for forests and vegetation in its catchment areas.

If the environment is well-protected, forests and herb gardens here can provide valuable herbs and other non-timber forest produce of great medicinal and nutritional value. A case in point is that the chilgoza tree here is known for the rich nutrition coming from its edible seeds, so there is a need to protect this tree. 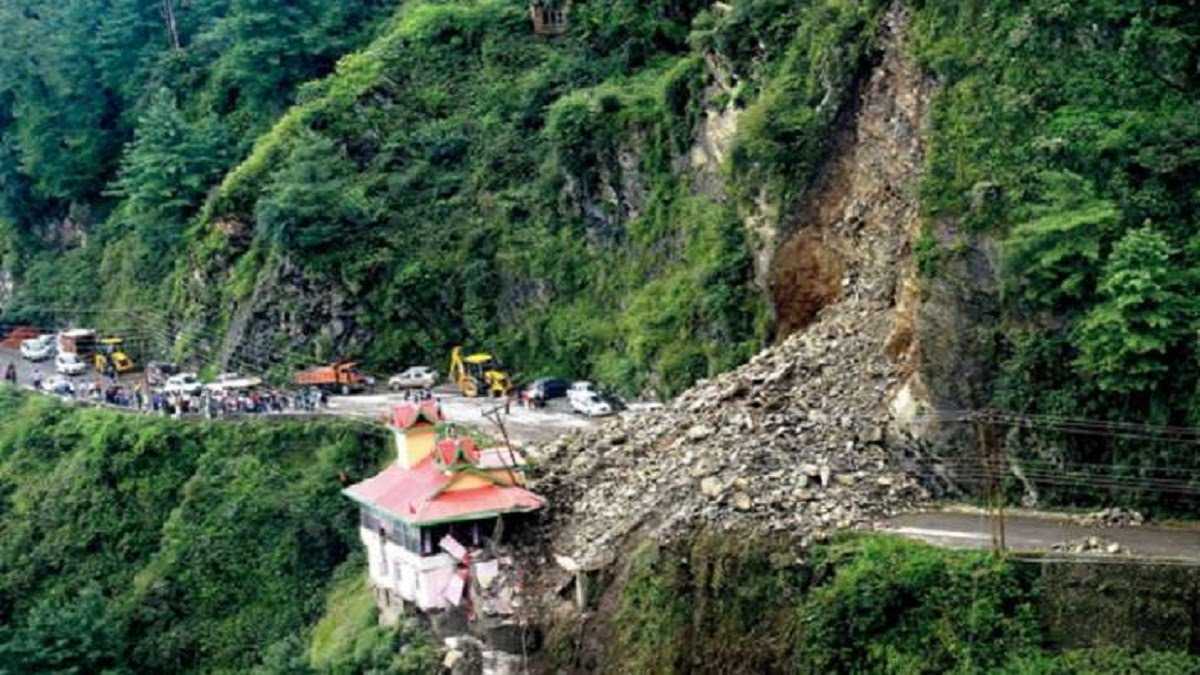 File photo of a landslide in Himachal Pradesh. Photo: PTI

As the area has gained fame for its purity of air, eco-tourism can be a good source of livelihood here. Tourists who can be encouraged to care for environmental protection can come here.

Sustainable, ecologically protective livelihoods based on natural farming, forests, bio-diversity, mixed species orchards and herbal gardens should be promoted. Adequate care should be taken for the protection of natural springs and rivers, rivulets to ensure clean fresh war for drinking, domestic needs and irrigation and eco-tourism.

Instead, what has actually taken place here is a huge construction boom of hydro projects involving the loss of trees and vegetation. The rampant blasting work has been weakening fragile hill stability, resulting in several new landslides, while also aggravating the existing ones.

Many activists and villagers of Kinnaur and neighbouring areas have said in their protests that the spate of hydro projects, whether under construction, planned or proposed on the Sutlej is beyond the carrying capacity of the river and the region. They say such projects will ruin the beautiful river by converting it into a long series of tunnels. The ecological role of the natural flow of the river is hence endangered, and the region can be exposed to the kind of big disasters already seen in Uttarakhand.

Many villagers in the region feel threatened with sustainable farming prospects reduced due to the denial of irrigation sources while the region is marked by the presence of large hydel projects and tunnels. The rise of hydel projects and tunnels have diverted water and ruined springs locally with debris and explosions. Trees are being cut and what is taken up in the compensatory replanting efforts is poorly planned and implemented.

Another aspect that needs special caution here is the need to protect the culture and autonomy of tribal communities as per the special provision for Scheduled Areas which also exist here. The special PESA law, or Panchayat Extension to Scheduled Areas, further strengthened this protection by giving tribal communities and their Gram Sabhas a big say in decisions concerning their land and people.

But as in other parts of the country, the PESA law is not being implemented in the right spirit. Actually, this law and constitutional provisions for Scheduled Areas can be extremely useful for protecting this fragile area from the onslaught of aggressive extractive forces, which have been trying to dominate the area.

The law has been brought into force precisely to protect vulnerable communities from such an onslaught, which the framers of our constitution foresaw and exercised caution and wisdom in providing protective provisions. Hence the protective provisions should be properly observed so that the development of villages and the region is in accordance with the aspirations and needs of communities.

However,  alien and even hostile norms of ‘development’ have been disrupting their life.

People of these remote villages want to pursue sustainable livelihoods in peaceful contentment, and they do not want the conditions necessary for this to be disrupted. The development pursued here should be in tune with the aspirations of people, based on a much bigger and empowering role for rural communities.

Ecological protection of these hills and catchment areas of our rivers is important not just for this region but for a much wider area, as what happens here affects them too.

Bharat Dogra is an honorary convener for ‘Campaign to Protect Earth Now’. His recent books include Man Over Machine (Gandhian Ideas for Our Times) and Protecting Earth for Children.