Assam now faces its annual flood, in addition to the ongoing health crisis. 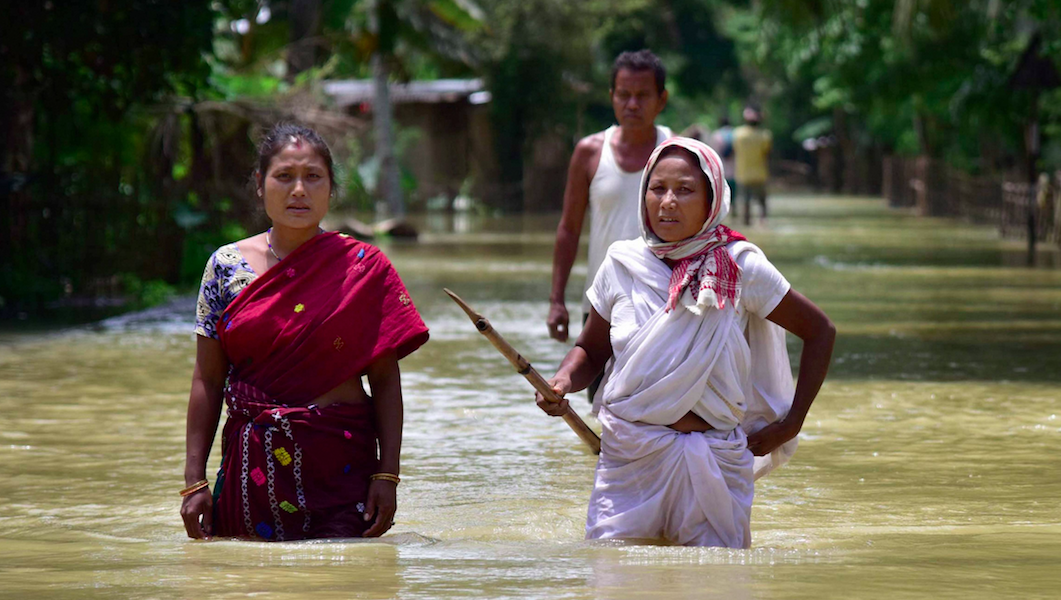 Villagers in a flood-hit area at Kampur in Nagaon district of Assam, Friday, May 29, 2020. Photo: PTI

Guwahati/Karimganj/Silchar: At least 19 people were killed and two others seriously injured in landslides triggered by incessant rains in south Assam’s Barak valley districts of Hailakandi, Karimganj and Cachar on Tuesday morning, officials said.

Seven people, including two children and a woman, were killed and two others seriously injured in a landslide that hit a tin house at Mohanpur area near Bolobabazar in Hailkandi district around 6 am, said a spokesman of the district administration.

The injured were rushed to the S.K. Civil Hospital at district headquarters Hailakandi.

In neighbouring Karimganj district, five family members, including a woman and three children, were killed in another landslide at Karimpur around 3.30 am, said district Superintendent of Police Kumar Sanjit Krishna.

SDRF personnel have rushed to the three landslide sites and recovered the bodies, officials added.

Chief Minister Sarbananda Sonowal condoled the loss of lives in the landslides.

“Deeply anguished at the loss of lives due to landslides triggered by incessant rain in Barak valley. I have directed Cachar, Hailakandi & Karimganj district administrations and SDRF to step up rescue, relief operations and facilitate all possible help needed to those affected,” he said in a tweet.

State minister Parimal Suklavaidya, who was in Hailakandi town to review the COVID-19 pandemic situation, has directed district authorities to immediately send their reports on the landslide to the government for payment of Rs 4 lakh to the next of kin of each of the deceased.