Ladakh Floods: A Timeline of Disaster

This region has always shared a complex relationship with water, and water has always had its way. 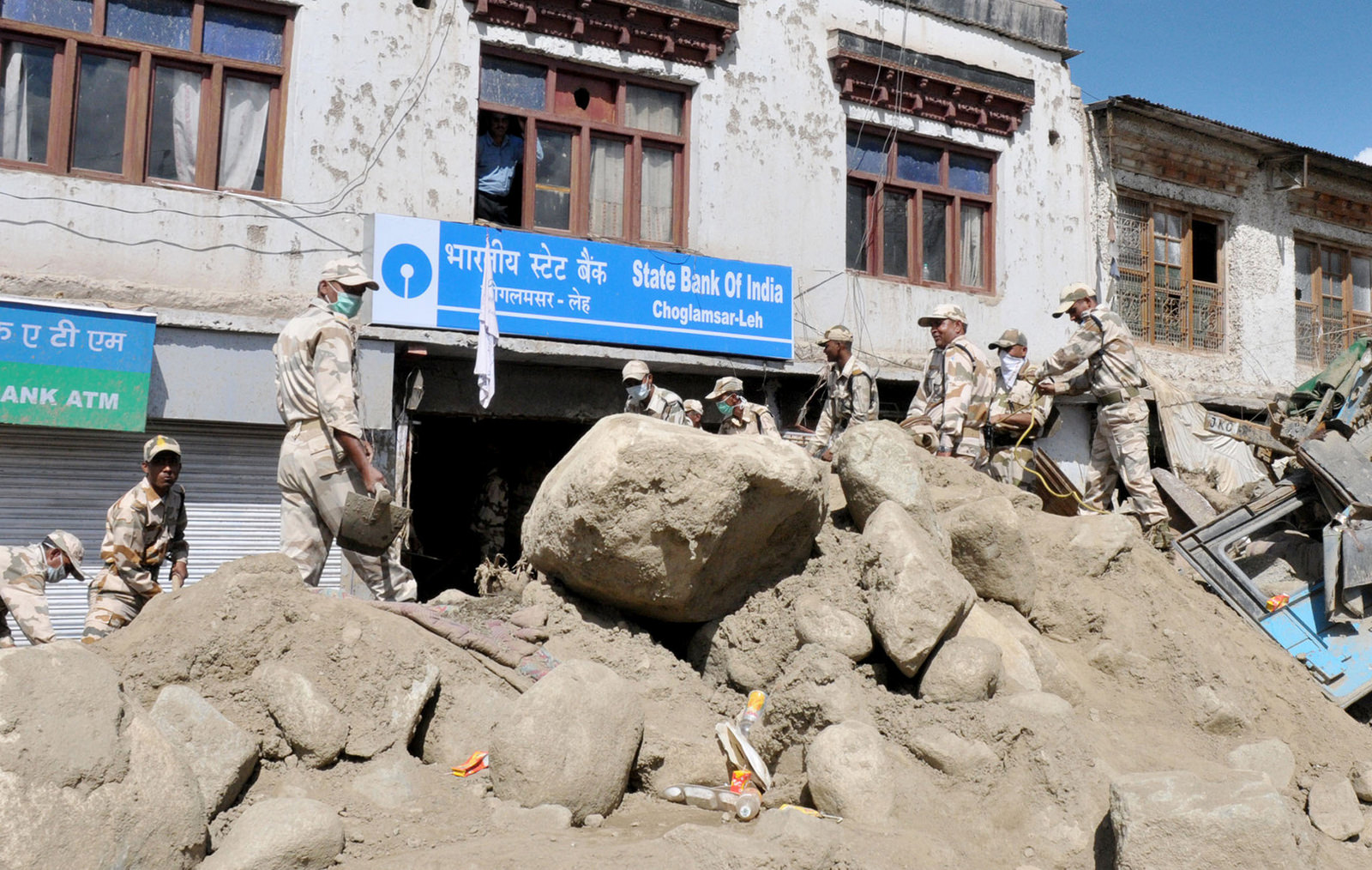 In the recent past, Ladakh’s arid, Moon-like landscape has borne many scars left behind by ferocious flooding. A statistical analysis of climate over Leh shows that, overall, the arid region has been receiving more rainfall than it used to. The Ladakh region is a cold desert in the Trans-Himalayas; on average, the daily precipitation ranges from 0.5 to 1.5 mm/day, which leaves the region cold and arid. The consequences of shifting precipitation trends are exacerbated by increasingly frequent cloudbursts, flash floods, landslides and glacial lake outburst floods (GLOFs).

The region’s topography is made up of granites and loose sediments that yield easily under heavy rainfall, setting off mudslides and sand flows. According to the deputy commissioner’s office, the large scale destruction and loss of lives during the 2010 floods were caused by the rapidly moving volumes of water charged with sand, mud, building debris, waste, boulders, trees and other objects swept up by the flow.

In Ladakh, the revenue department records flooding events and evaluates them on the basis of losses incurred, of property and life. This explains the extraordinary media coverage of the 2010 floods. It also explains why catastrophic tragedies, like the floods of 2006 and 2015, didn’t get much attention from the media or from the scientific community.

“The Ladakh region received more than double the average rainfall it receives in the monsoons” in 2015, according to Sonam Lotus, the director of the meteorological department in Jammu and Kashmir. In July and August 2015, unusual spells of rains and flash floods caused damage worth Rs 87.74 crore in Leh district and Rs 80 crore in Kargil. The floods destroyed irrigation canals and equipment, buried fertile land under debris, and filled clean water sources with muddy water and slush.

“Our supply of irrigation water was cut off because of the floods. The crops dried out, we didn’t have water to drink,” Tsering Namgail, Biama village, said. In the aftermath, army tankers were dispatched to provide drinking water to villages and the government distributed rations for subsistence.

Though there are no records of loss of human life, infrastructural damage caused by the 2015 floods was comparable to the floods of 2010. “In 2015, century-old houses and generations-old orchards of our village were washed away,” said Nawang Namgil of Wanla village, which was washed off. Namgil runs a travel agency in Leh and has been working closely with Nancy Chin, an anthropologist at the University of Rochester, New York, to understand the floods’ impact on the region. Their work focuses on the rarely discussed subject of emotional adaptation to the effects of climate change. “Fertile agriculture lands, houses, our entire village – now under tonnes of debris. Hopefully someday a part of it can be retrieved with the help of bulldozers,” he said. A timeline of floods in Ladakh. Source: Author provided

The residents of Rongjuk, a hamlet of Khardong village in Nubra valley, have a similar story to tell. “Ours used to be one of the most flourishing villages with orchards, agriculture fields and forests. Now it’s all gone, only rocks and sand remain,” Sonam Wangchok Kharzong, the secretary of the Himalayan Cultural Heritage Foundation, said. The foundation works towards conserving tangible and intangible heritage in Ladakh. Rongjuk was virtually wiped out by floods spanning over a decade. Kharzong’s centuries-old house was also washed away along with most of the village during floods in 2006.

Later, most affected families moved closer to where their villages once where, trying make new lands cultivable. “But subsequent floods, specifically the 2010 and 2015 ones, ultimately destroyed the villages and broke the will of the people. Now they are demanding [that they be settled] at a new place because there are no cultivable lands around,” Kharzong said.

In 2006, a cloudburst flooded the Gyalung Nalla, Leh, Phyang and Igu streams, destroying large parts of Phyang village. However, not much was reported or even recorded. A cloudburst is a sudden and heavy downpour over a small region of land and precipitates flash floods. “There are very limited studies on the cloudbursts of 2005 and 2006 because they did not lead to the [kind of] destruction that the 2010 floods [did],” said Renoj Thayyen, of the National Institute of Hydrology, Roorkee, and one of few scientists studying flooding behaviour in the Western Himalayan region. “But those floods were no less in intense. They were comparable to the 2010 floods.

A study of Ladakh’s 2010 floods that Thayyen coauthored, stated, “Occurrences of six such flood events in and around Leh in a short span of six years since 2005, which are neither reflected in the rainfall records nor appreciated as [being of] cloudburst origin, point toward an urgent need to upgrade the monitoring network of the region.” This study was published in 2012, after which Ladakh has witnessed a spike in flooding events. In August 2017, just four months ago, there was a flash flood in Achinathang, a modest village in Ladakh.

The year 2015 has been the worst by far for the region. Before the July-August floods, the Phuktal lake in Zanzkar was flooded in May. In the same year, the apricot crop failed on a large scale because it became infested by a previously unseen moth-like insect. In 2014, a flash flood struck Gya village, close to Leh. But till date, there have been no scientific studies attempting to make integrated sense of the origins and characteristics of these events (except for the major disasters).

This region has always shared a complex relationship with water, and water has always had its way. Even the poorly recorded and ill-maintained history of Ladakh enumerates several instances of flooding, some going back more than a century. It is only in the last decade that flooding has become a recurring, almost annual, event in this cold desert, often leaving a trail of broken houses, ravaged fields, uprooted orchards and abruptly ended lives in its wake. “Floods in the Himalayan region are generated by atmospheric, cryospheric and geological processes but are also highly influenced by the topography of the area, making them extremely localised events,” Thayyen said. “But a lack of tracking and monitoring facilities and capabilities in the region remains a huge challenge, making it absolutely impossible to assess if these incidents [have been] increasing in the recent past due to climate change.”

Briefs on some floods in recent years

On a clear, sunny in August, the Achena Lungba River was unexpectedly flooded. The gushing water washed away 70-feet Bailey bridge that blocked the outlet of the stream into the Indus, thus creating a temporary reservoir. The flood damaged more than 500 meters of Khaltse-Batalik Road. Four people were washed away.

On December 31, 2014, a massive landslide, 500-600 meters in length, blocked the Phuktal river and created an artificial lake. This dammed up water was suddenly released on May 7th, 2015 causing a flash flood in Phuktal river. The breached water washed away dozens of bridges, schools and residential houses.

The months of July and August 2015 were marked with unusual spells of rains and flash floods throughout Ladakh. Residential houses, roads, agricultural infrastructure, crops and orchards suffered a damage that was estimated at 87.74 crores in Leh district and 80 crores in Kargil. Flooding caused damage to irrigation canals, and cut off streams of clean water causing a shortage of drinking and irrigation water.

Gya village of Ladakh witnessed a Glacial Lake Outburst Flood (GLOF) on the midnight of August 6, 2014. Late in the night, the glacial stream of the village started to gush with muddy water that gave off a peculiar smell. Within an hour the water destroyed the farmlands, crops and a couple of houses.

Heavy rains and cloudbursts led to landslides and flash floods at several places in Kargil town on the night of first August. Water in Suru river started flowing in excess and into township area. It also washed away a portion of the Srinagar-Leh National Highway.

The region experienced a spate of cloudbursts and subsequent flash floods over and above a 12.8 mm of rainfall. Official figures say it claimed 255 lives. The authorities estimated that the cost of permanent restoration and land reclamation would be 117.34 crores.

Heavy rains and cloudburst flooded Gyalung Nalla, Leh, Phyang and Igu streams in Ladakh in 2006. The flood caused immense damage to the residential properties and roads. The foot bridges were also washed away.

Preksha Sharma is currently based in Mumbai and is the assistant editor of The Indian Quarterly. The story is being published as part of IHCAP-CMS Media Fellowship Program.