Anatomy of a Flood: How Kerala Withstood a Calamity

From politicians to the Kerala media, fisherfolk to civilians, everyone's consciousness and commitment to the society shone through in the rescue and relief operations. 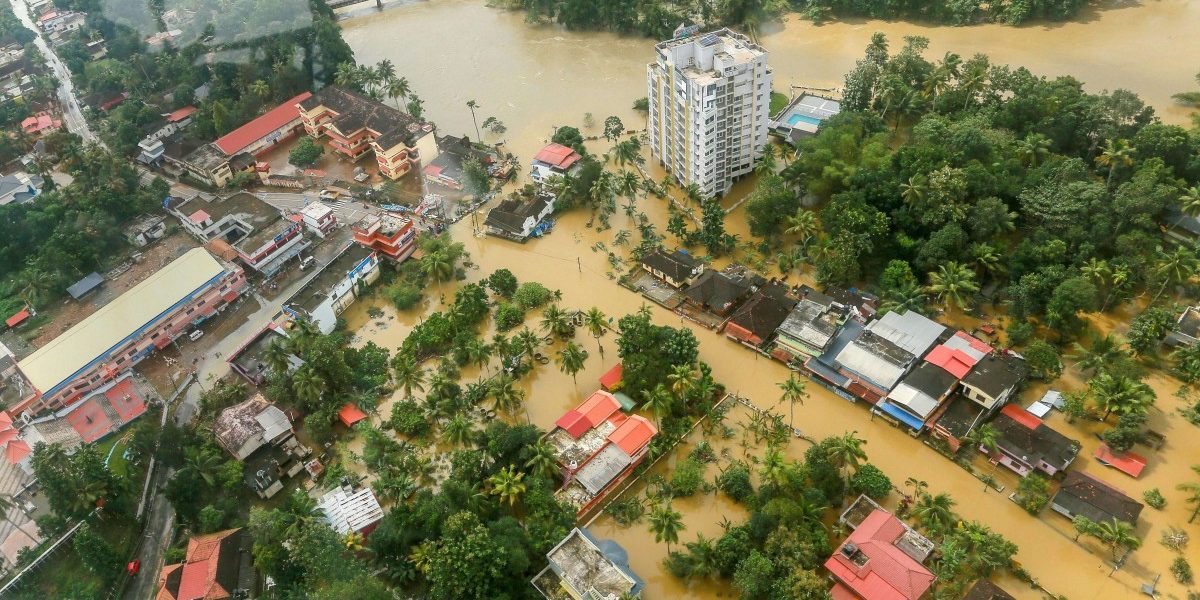 Flood affected areas of Chengannur seen from a Indian Navy helicopter, at Alappuzha district of the Kerala, on Sunday August 19, 2018. Credit: PTI

Kerala has been ravaged by floods – the worst in almost a hundred years – for the better part of August. The situation turned particularly grim towards the second week – as the rain kept pouring down without a break. In fact, the state received 42% more rains in the southwest monsoon than it normally receives and all of it in a short time-span – causing widespread devastation and loss of lives.

With the death toll in the last fortnight (till Monday) crossing 200, the total number of deaths in the monsoon fury since June is now close to 400. This figure could go further up although rescue efforts are now on the verge of completion.

While the monsoon in 2013 (37%) too was well over the accounted for +/-19%, it was spread over a longer duration of four months with dry days in between – letting the water seep back into the earth and drain out to rivers and the Arabian Sea. The excess rainfall in August alone was 160% more than normal and districts like Idukki in particular (95% excess rainfall in the month of August) took the pounding. With rain predicted to continue all the way until the end of September, albeit with lesser intensity, it is feared that the record of the ‘Great flood of 99 ME’ will be breached.

In popular parlance, the 1924 flood is referred to as the ‘great flood of 99 ME’. It refers to Malayalam Era 1099 – corresponding to 1924 on the Gregorian calendar, when Kerala is recorded to have received its highest ever – 3368 mm – rainfall. The state received about 2500 mm rainfall between June 1 and August 20. But with the Indian Meteorological Department predicting some let up this week, things are finally looking up for the rain-battered state.

While torrential rains played havoc with the state and populace, one redeeming feature has been the way people responded to the crisis. People from all walks of life contributed massively, in one way or the other, to the crisis. In fact, when Leader of Opposition Ramesh Chennithala joined chief minister Pinarayi Vijayan in his aerial surveys in the initial phase, it sent a clear message that the political class was standing together in the hour of crisis. Moreover, most of the ministers and people’s representatives and bureaucrats have been working shoulder to shoulder in undertaking rescue and relief. 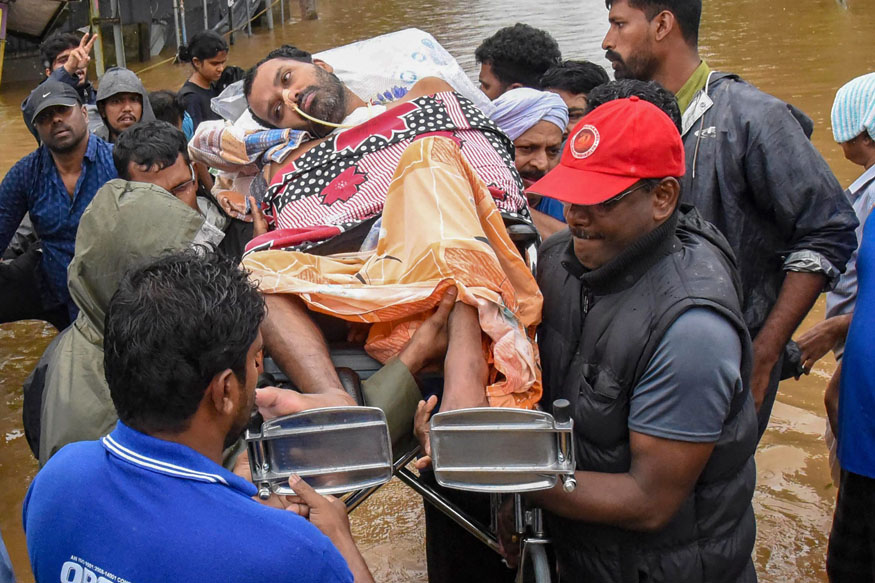 A bed-ridden patient being rescued from a flood affected region following heavy monsoon rainfall, in Aluva at Kochi on Saturday, August 18, 2018. Credit: PTI

The situation took a turn for the worse around August 15, when shutters of of the state’s 34 (out of 42) dams had to be opened following incessant rains in catchment areas. While flooding was initially restricted to the banks of the Periyar river – following the opening of the spillways of the Idukki Dam – it soon engulfed the whole of central Kerala as the rain kept pounding. The opening of two shutters of the Cheruthoni Dam, initially meant to be a trial run, could not be paused even for a moment following incessant rain. Soon, all five shutters of the dam had to be opened one after the other. But as this discharge through shutters couldn’t match the inflow, the water level kept rising till it almost touched the danger mark. This water discharge from the reservoirs soon led to flooding of other areas.

It was now the turn of dams in other parts of the state as rainfall intensified further. Following the opening of the shutters of the Kakki and Anathode reservoirs in Pathanamthitta, the low-lying areas of that entire district and nearby Alappuzha district too got submerged. The water kept rising at such a pace that people who had taken shelter in the first floor had to suddenly scamper to the roof in a matter of a hours.

The opening of the shutters of the Sholayar Dam on Chalakudy river almost at the same time left the state having to deal with the crisis on multiple fronts – and for the first time, it seemed that rescue efforts and evacuations weren’t keeping pace with the fury of nature. When rivers and their tributaries began to change course and flow all over the place, it seemed things were gradually getting out of hand. Regular communication with the central government and daily stock-taking meetings of the National Crisis Management Committee (NCMC) notwithstanding, the demand for more choppers was taking time.

When Chengannur MLA Saji Cherian called up multiple news channels and broke down on air – explaining how most of his constituents have been stranded without food and water for three days – the scale and magnitude of the tragedy suddenly dawned on everyone. And, for the first time, it seemed things were getting out of control on August 17.

Just as things suddenly looked very grim, Kerala found its new superheroes. The fishermen of Kerala swung into action and rowed all the way from the fishing hamlets of Thiruvananthapuram and Kollam to Chengannur with their boats and began rescue work. The fact that they chose to do it on their own volition – without any expectations from the state government – speaks volumes. While the navy and the NDRF followed up and took charge of the evacuations in Chengannur later, the death count would probably have gone up substantially had the fishermen not heeded to their call of duty. 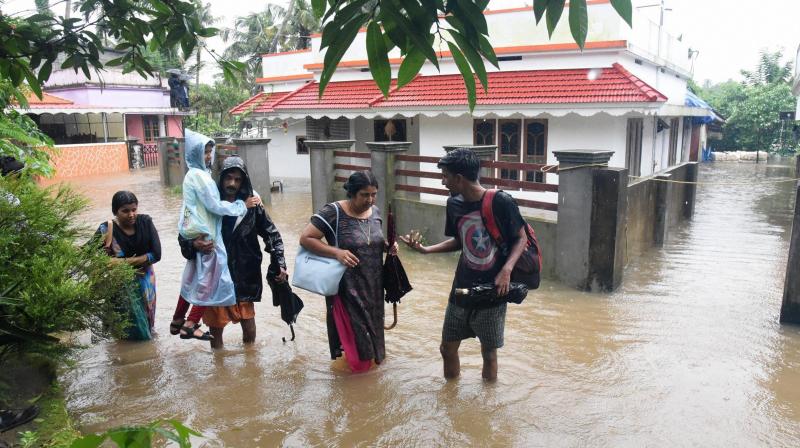 People shift from a flood-hit locality in Kochi on Wednesday. Credit: PTI

Saji Cherian’s SOS, by a ruling party Marxist MLA no less, immediately sent a chill down the spine of Kerala’s citizenry. Leader of Opposition, Chennithala, demanded for the army to take over rescue operations; he even quietly slipped a petition to the Prime Minister when Narendra Modi touched down in Thiruvananthapuram at 11.30 pm that night. The next day (August 18) was going to be critical and saw the maximum number of people getting rescued.

Despite taking stock and conducting aerial surveys of central Kerala along with the chief minister next morning, the prime minister sanctioned a paltry Rs 500 crore as interim relief against Kerala’s demand for 2,000 crore. While the Kerala government initially pegged the damages at 8,000-odd crore, it was now revised to Rs 19,512 crore. (A bureaucrat spoke off-the-record that it could reach close to 50,000 crore – even above the plan funds of the state – post the final estimate)

The rescue and evacuations continued in full swing even on the next day, August 19, as the intensity of the rainfall subsided. A decisive number of people were again moved to relief camps – this time from the southern part of Ernakulam and northern part of Thrissur districts, as water began to slowly recede. It was clear by now that the major crisis had been averted.

While close to 200,000 people were evacuated in the five days beginning August 15, 600-odd people were officially rescued on August 20, signalling the near-completion of rescue efforts. The chief minister has assured that rescue efforts will continue till the last person has been saved. As on the evening of August 20, there were 10,28,073 people staying in 32,734 camps across the state – with more than one lakh children (under the age of 12) among them. (Official figures released by PRD). The trivial sum offered by the Centre had already been matched by the cumulative sum contributed by other states and Rs 370 crore accrued to the chief minister’s relief fund.

A word of praise might be due to the vibrant media in Kerala – especially news channels – for the way they covered the calamity 24/7. Many channels even had a control room operating from their studios. Nisha Purushothaman, an anchor with Manorama News, spoke to this writer and explained how the organisation was careful in ensuring that the coverage was strictly non-partisan; also, how they took extra effort to not undermine the state apparatus – despite shortcomings on the latter’s part. Journalists and reporters worked tirelessly without shifts. While they might have merely performed the job required of the fourth estate in a democracy, the coverage of the ‘national media’ was abysmal as usual.

The contribution of fishermen – especially in the aftermath of the state failing to react adequately during the Ockhi disaster – must serve as an eye-opener for the state. For a community, often been relegated to the margins, Kerala owes them a debt of gratitude.

The chief minister too needs to be lauded for keeping his calm despite things seemingly getting out of hand at one point. Despite his well-documented run-ins with the media in the past, Pinarayi Vijayan held regular press conferences (sometimes even two) to allay fears that went a long way in assuaging the people at large. Notwithstanding demands that rescue operations be outsourced to the army, he addressed a press conference on August 18 and calmly explained how that wasn’t the case anywhere. Moreover, unlike the Kashmir floods of 2014, the civilian administration was very much around, despite some glitches in coordination. A journalist put it in context: “Well, the chief minister did only what he was expected to. Does following the rajdharma become a matter worth praise in India, today?”

Finally, a hat-tip to the indomitable spirit of the Malayalis – especially the youth among them; their consciousness and commitment to the society shone through in the rescue and relief operations. How the youth and civil society mobilised themselves, plugged holes of the state administration and still continue to mobilise resources and run relief camps – can serve as a template to the rest of the country on how to unite in the face of a crisis. The tragedy struck Kerala even as the festival of Onam was round the corner. And just as Keralites celebrate this remarkable festival – across faiths – in the true spirit of brotherhood, the entire populace stood shoulder to shoulder in their time of crisis.