Upon Release, Jailed Activists Allege Being Targeted Over BBC Documentary on Kaziranga Excesses

Pranab Doley and Soneswar Narah claim that their role in highlighting the impunity enjoyed by Kaziranga’s forest guards is behind the repeated police harassment that they have been subjected to. 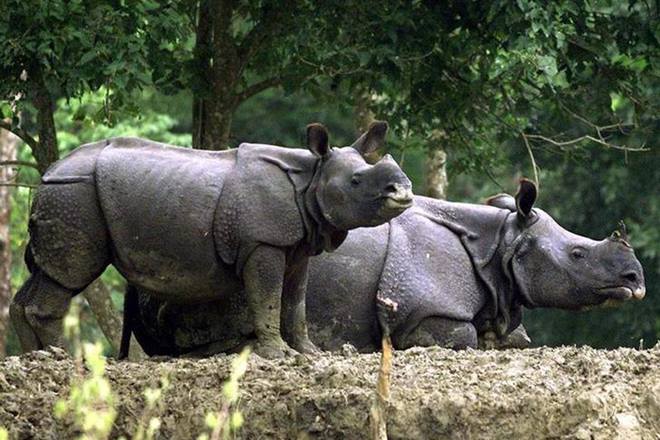 On April 24, tribal rights activist Pranab Doley, who features in the recently banned BBC documentary Killing for Conservation, rushed to the Bokakhat police station at Kaziranga National Park in Assam upon being tipped off that five local men, including two juveniles, had been detained allegedly without any basis. Upon inquiring about the case and insisting that the young men be allowed to meet their family members, Doley was dragged into a lock up.

Later, when activist Soneswar Narah reached the police station to inquire after Doley, he met the same fate. The young men were released the same day, but Doley and Narah weren’t. Both were informed that they had been arrested on the basis of an FIR filed on April 19.

After being granted bail on May 4, they were immediately rearrested in another case filed on April 24. They were eventually released on May 5. They have been booked under sections 147 (rioting), 447 (criminal trespass), 353 (assault or criminal force to deter public servant from discharge of his duty) and 506 (criminal intimidation) of the Indian Penal Code.

Speaking to The Wire upon his release, Doley said, “We have been raising scientific questions about the killings in Kaziranga for a while now and don’t have a lot of answers yet.” Commenting on his arrest, he said, “We were arrested without a warrant and were forcefully made to wear handcuffs while being taken for our bail hearing. Further, while we were locked up at around 4:30 pm, the time of arrest has been officially documented as 9 pm.”

Doley and Narah are members of Jeepal Krishak Shramik Sangha (JKSS), an Assam-based organisation. The JKSS had recently come out in strong support of the BBC documentary which has been banned by the National Tiger Conservation Authority and called “erroneous” by the environment ministry. The film that critiques Kaziranga National Park’s conservation methods, states, “Its rangers have been given the kind of powers to shoot and kill normally only conferred on armed forces policing civil unrest”.

Doley features in the film critiquing the “dangerous impunity” with which forest guards harass and shoot locals. He also raised questions about the thoroughness of the investigation in related cases. The JKSS has long been pressing for an independent inquiry into the killings of innocent tribals by forest guards and adequate compensation for those affected. Doley and Narah both belong to the region. Doley, after completing his masters in Social Work from Tata Institute of Social Sciences, had decided to return home and work for his people.

The first FIR has been lodged by a guard from the office of the district forest officer, Bokakhat, alleging that Doley and Narah forcefully entered the office premises with 50-60 members of JKSS, hung banners, disrupted the functioning of government office and threatened to burn it. However, as per an appeal for action forwarded to the National Human Rights Commission by human rights defenders, members of JKSS held a peaceful demonstration in front of the Bokakhat Agriculture Office (BAO) and Bokakhat divisional forest officer (DFO) on April 10. They had several demands including 100% reservation for the locals of Kaziranga National Park in the recruitment of 90 Assam Forest Protection Force (AFPF) personnel from the five adjoining districts, immediate compensation for families who have lost members due to animal depredation and excesses of forest department and disclosure of the clearance papers of highlands being constructed inside the core zone of Kaziranga.

On April 21, members of JKSS, along with Takam Mising Porin Kebang (TMPK) and Mising Mimag Kebang (MMK), presented this set of demands in front of the forest minister Pramila Rani Brahma, who assured those present that 92% reservation will be made for the locals of Kaziranga National Park for the posts of AFPF and that the advertisement for these posts would be published again with this criterion. Although both Doley and Narah were present at this meeting, Dharanidhar Bora the divisional forest officer of Bokakhat, under whom the officer who had lodged the complaint works, did not mention the FIR or the events that, according to his narrative, occurred on April 19. Instead, he assured those present that he will hand over the minutes of the meeting to them on April 24.

It was while Doley was at the DFO’s office to pick up the minutes of the meeting on the stipulated date and had rushed to the Bokakhat police station, that he was locked up. Doley says, “I reached the police station with the families of the five men who had been detained and helped them file counter FIRs. When the SP came to know that the FIRs had been lodged then, the Bokakhat police station lodged an FIR against Narah and me in the second case.” Dhrubojyoti Bora, Dolay and Narah’s lawyer, while speaking to The Wire about the FIR registered on April 24, said, “They have been charged under the same sections as the first FIR lodged on April 19, 2017. If the complaint had been lodged on April 24, why did they wait until they were granted bail and then arrest them under the second case?”

Bondita Acharya, the northeast coordinator for the human rights organisation, says, “Pranab and his organisation have been consistently defending the rights of the tribals in the area, especially in cases related to harassment and encounters by the forest guards at Kaziranga National Park. With the BBC documentary the issue has gained international prominence and many influential people, including politicians and the forest department, are involved in poaching.”

Talking to The Telegraph in March, JKSS adviser Narah had said, “We have been on the receiving end of atrocities by forest personnel for too long. In the last three years, 57 people have been killed in Kaziranga – 27 were killed in 2014, 23 in 2015 and seven last year. Our organisation has been demanding implementation of the Scheduled Tribes and other Traditional Forest Dwellers (Recognition of Forest Rights) Act, 2006 in the forest areas it is not applicable so that forest-dwellers can get fair compensation and rehabilitation.”

Commenting on the issue, Satyendra Singh, the director of Kaziranga National Park, said, “My personal view is that these two people want to highlight themselves as leaders. They want to be arrested and be in the media.” As per the concerns raised by activists about this being an attempt to silence the growing protest against the harassment of locals by the forest department in Kaziranga, he said, “The two are not related. These people were demanding a written statement that forest jobs will be reserved for locals. This issue can be dealt with the headquarters in Guwahati and not us.” He also clarified that the FIR had nothing to do with the BBC documentary.

Refusing to allow the resistance towards the forest departments high-handedness die down, around 200 members of JKSS, TMPK and MMK staged a protest on April 27 in front of the Bokakhat police station demanding the immediate release of Doley and Narah. They were ordered by the police to leave the place within five minutes. HRDO’s appeal to the NHRC states that when the protesters refused to leave the place, police snatched their banners and women protesters were beaten up by male police personnel while only one woman police officer was present. It is alleged that Govind Kakoti, a traffic inspector, caught hold of one woman protester from the back and tore her blouse. Three members of JKSS were arrested and later released. The local media has maintained an eerie silence over the arrests.