Joshimath has been facing a displacement of 3-10 cm for past four years, says one analysis while another predicts that displacement may ‘aggravate’ over time.

Kochi: Cracks developed on the Badrinath National Highway in Joshimath on Saturday. The highway is the only route to Badrinath, a place of religious significance for Hindus. According to authorities, the road will be repaired in time for the upcoming Char Dham Yatra, a journey undertaken by pilgrims on this route, which begins in April-May.

Meanwhile, Joshimath has been witnessing a land displacement of 3-10 cm every year for the past four years, suggests a preliminary analysis of satellite imagery by foreign scientists. A modelling analysis (which is also yet to be peer-reviewed) by a team of Indian scientists predicts that land displacement in Joshimath and the town of Bhatwari will likely “aggravate” as the area will potentially experience an accumulated displacement (displacement involving both vertical and horizontal movement) of 20-25 metres if seismic factors (such as proximity to the point of origin of past earthquakes) are taken into account.

Experts said that authorities need to work on improving communications about the land displacement and that the “perceived lack of transparency at the moment is very unhelpful”.

As per news reports, the Badrinath National Highway in Joshimath developed cracks, measuring between one to two metres long, on January 21. However, Disaster Management secretary Ranjit Sinha was quoted as saying that the administration is keeping track of the land displacement on the highway. He also added that the road would be repaired in time for this year’s upcoming Char Dham Yatra, which begins in April-May. However, there are speculations that the Yatra is likely to be regulated this year due to the cracks on the highway, as per some news reports.

Currently, the Chamoli district administration has recorded 863 buildings to have developed cracks due to land displacement at Joshimath. Of these, 181 buildings are in the ‘unsafe zone’.

Cracks in some buildings have also widened after Joshimath received a bout of heavy snowfall on January 21, said district officials. However the police and State Disaster Response Force are on standby to deal with the situation, they added.

Parts of the Joshimath slope have been undergoing continuous land displacement for the past four years, as per a preliminary analysis of satellite imagery posted on a blog, and conducted by remote sensing and landslide experts at the Aristotle University of Thessaloniki, the School and Observatory of Earth Sciences under the University of Strasbourg and National Center of Scientific Research in France.

The team analysed Synthetic Aperture Radar (SAR) images captured by the Sentinel-1 satellite of the Joshimath area from January 2018 to December 31, 2022. They also used InSAR techniques, which combine two or more SAR images to estimate differences in displacement. Their analysis suggests that parts of Joshimath have been witnessing land displacement of between 3-10 centimetres every year for the past four years.

This is in line with the subsidence rates that the ISRO-National Remote Sensing Centre, Hyderabad, provided in a preliminary report last week, the analysis said. Per the ISRO-NRSC report, Joshimath underwent slow subsidence, or sinking of land, of around 9 cm between April and November 2022, and rapid subsidence of around 5 cm between December 27, 2022 and January 8, 2023.

As per the analysis by foreign experts, the land displacement pattern is also “in agreement with recent field observations mentioning the opening of fissures of several centimetres testifying of a complex sliding pattern with both vertical and horizontal deformation”.

The analysis shows that three portions of the landslide complex are moving; the lower part of the slope is moving the most and this coincides with the margins of the landslide blocks identifiable from Google Earth, wrote David Petley, vice-chancellor of the University of Hull, UK, while commenting on the Joshimath land displacement on his blog that provides commentaries and analyses of landslides across the world.

“We would expect to see some of the greatest amounts of building damage occurring around these margins,” he noted.

A January 18 New Indian Express report had quoted unnamed scientists as saying that the situation would improve soon as summer starts and water flow decreases, but this is “slightly odd”, commented Petley in his blog. “First, the summer is a long way hence, and second the summer will bring monsoon rainfall, which is unlikely to help (although it will not necessarily have an adverse effect),” he wrote. “Finally, of course, the land is not trying to do anything except obey the laws of physics.” 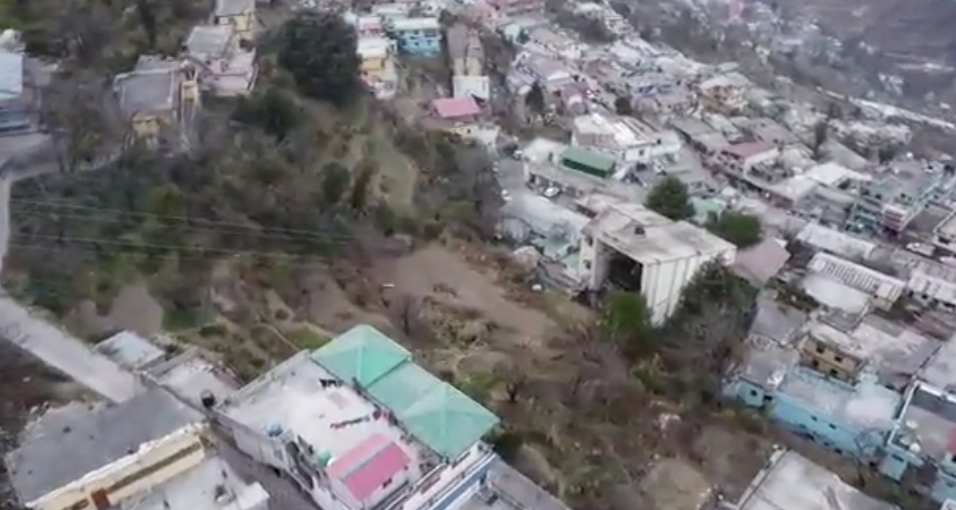 An aerial view of Joshimath, seen in a video screengrab. Photo: Twitter/@AnupamTrivedi26

Land displacement will continue to occur in Joshimath if several factors including rainfall and its seepage to the ground, domestic water and sewage discharge, and seismic loads — such as proximity to the point of origin of past earthquakes – are taken into account, as per an analysis by a team of Indian scientists, including Y.P. Sundriyal, head of the Department of Geology at HNB Garhwal University, Srinagar.

The analysis – which is not yet peer-reviewed and can be accessed as a preprint in the journal Natural Hazards and Earth System Sciences – factored in rainfall infiltration, building or construction loads, domestic discharge and seismic loads to model land displacement in the towns of Joshimath and Bhatwari, also in Uttarakhand state.

It found that if rainfall infiltration, building load and domestic discharge are taken into account, Joshimath could witness up to six metres of land displacement. This increases drastically to between 8-22 metres if seismic loads alone are taken into account, especially in spots where the slope is steep and at the bases of slopes. In the case of Bhatwari, land displacement due to seismic loads alone can be up to 25 metres. That is because Joshimath and Bhatwari are within 30 km of the point of origin of three major earthquakes in the past: one of magnitude 7.8 on the Richter scale in 1803, a 6.8 magnitude earthquake in 1991 and a 6.6 Richter-scale earthquake in 1999.

So seismic or geological factors could be contributing significantly to the land displacement in the area, said Sundriyal. However, the authors wrote that the role of anthropogenic factors such as “continuing rapid construction” in Joshimath to cater to the high tourist influx “cannot be denied”.

The region received a tourist footfall of more than 33 lakh in 2022 for the Char Dham Yatra as per official estimates even before the pilgrim season ended, said Vipin Kumar, the corresponding author of the analysis who is currently with the Department of Geology, Doon University, Dehradun, Uttarakhand. The high influx of tourists in Joshimath too — where many tourists stay and pass through —would have led to a huge discharge of water assuming that one person uses around 60 litres of water a day, said Kumar.

The seepage of the water to the ground below would have added to the instability, he told The Wire. Experts have told The Wire previously that the lack of a proper drainage system is a huge concern in Joshimath. A 1976 report by an expert committee also highlighted the need for a “pucca” drainage system in light of the frequent landslides in the region.

Global climate change too will add to the woes, said Kumar. Their recent, but yet-to-be-published data shows that due to climate change, there has been an increase in surface radiative temperature in the Kedarnath-Joshimath area. Surface water runoff has also increased as glaciers uphill are melting and decreasing in size, said Kumar. This means more water discharge and therefore more instability in the future. The area has also witnessed a decrease in forest cover and grasslands too.

Since the article has not been peer-reviewed yet, we need to be careful to draw too much from it, said Petley, commenting on the preprint in an email response to The Wire.

“But to me, the key takeaway message is that the slopes at Joshimath are very sensitive to instability, driven by a wide range of factors,” he wrote.

“Finally, in my opinion, real work is needed around communications,” he added. “The perceived lack of transparency at the moment is very unhelpful.”

For instance, the ISRO-NRSC report, which was among the first preliminary analyses to be made available, was taken down from the official website, as The Wire reported. Following this, on January 13, the National Disaster Management Authority (NDMA) imposed a gag order on scientists from government institutes preventing them from interacting with the media or sharing any data on social media on Joshimath.

Legal experts have termed the gag order “unconstitutional”, as per a Times of India report. The NDMA cannot “delay or restrict information during a crisis”, and can be “taken to court” for the gag order, Colin Gonsalves, a senior advocate in the Supreme Court told the newspaper.