Though experts suggested that heavy construction should be prevented in the area more than four decades ago, governments have pushed through a hydel project and an ambitious yet controversial highway project in the region. 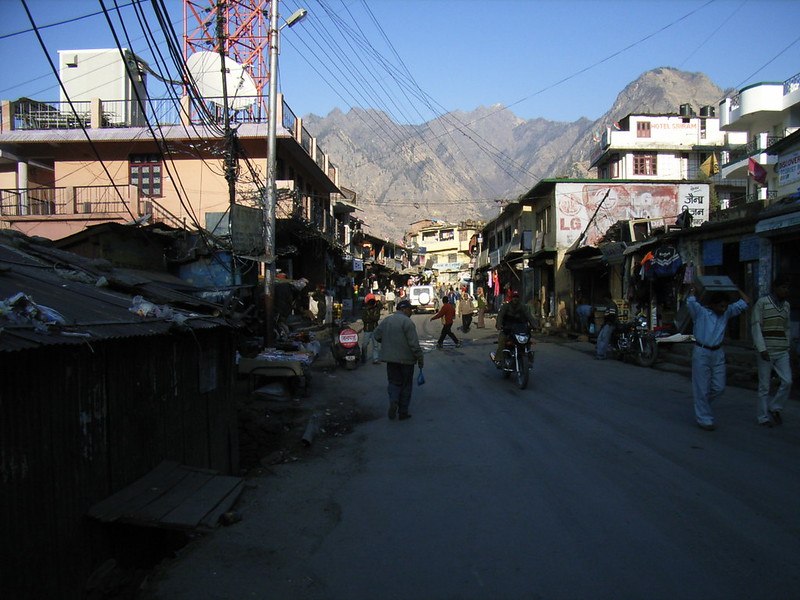 Cracks on the walls of houses. Fields and roads splitting open, some oozing brown, muddy water. There’s much that residents of Joshimath, a hill town in the north Indian state of Uttarakhand, have had to contend with for almost a year now. Their town is sinking.

On January 8, authorities listed the area as a landslide and land subsidence-hit area. As of January 9, 678 buildings – including houses – had developed cracks, and authorities evacuated more than 80 families from their homes. Cracks have also emerged in homes in nearby towns such as Raini and Karnaprayag.

These towns are situated in a fragile, mountainous region, near where several developmental projects are currently underway.

Residents of Joshimath blame the excavation work being undertaken as part of the construction of the Tapovan Vishnugad hydel power project – a 520 megawatt dam – as one cause for the sinking of their town. The construction of the Char Dham project – an ambitious 900 km-long all weather road through the state to promote religious tourism – is also a cause, according to experts.

Governments have pushed such developmental projects through despite reports, even more than 40 years ago, warning that heavy construction in the area should be restricted. Along with exacerbating climate change, the situation does not bode well for the region, scientists said, adding that while development is necessary it cannot come at such environmental or human costs.

The sinking of Joshimath

The hill town of Joshimath rests at around 1,875 metres above sea level, in the northwestern district of Chamoli in Uttarakhand. The town is important in many ways: it is the gateway to trekking routes (in the Himalaya mountain range), holy sites (such as Badrinath that are part of Hindu pilgrimage routes like the Char Dham circuit), and is also of strategic importance for access to parts of the Indo-China border.

Buildings burgeoned in Joshimath to meet all these needs, said Kavita Upadhyay, a water policy expert and researcher.

For residents of Joshimath, the first week of the new year opened to cracks emerging on roads and the walls of houses. Residents had been observing such cracks since February last year, after the flash floods that claimed more than 200 lives, said Upadhyay. But in the first few days of January this year, it became impossible to ignore.

In addition to confirming that Joshimath was sinking and that 678 buildings had cracks, authorities have now said that 600 more families will also to be moved to safer locations temporarily; demolition of buildings that have developed numerous cracks has also begun and two hotels are the first that will be razed to the ground.

But how does a hill town sink?

Joshimath is a landslide-prone zone. A 2007 study that mapped landslide hazard areas in the Joshimath–Badrinath road corridor found that Joshimath town was one of the most hazardous landslide-prone places in the area. In fact, as long ago as the 1970s, frequent landslides in the Joshimath area worried residents. The government constituted a committee under M.C. Mishra in 1976 to investigate the issue and recommend both short-term and long-term actions.

The report by the Committee, which The Wire accessed, noted that the town of Joshimath is situated where it should ideally never be: on an “ancient landslide”, a mixture of sand and stone. Thus, surface water – from rains or snow melts – can percolate into the loose soil and destabilise the land, resulting in landslides, it noted. 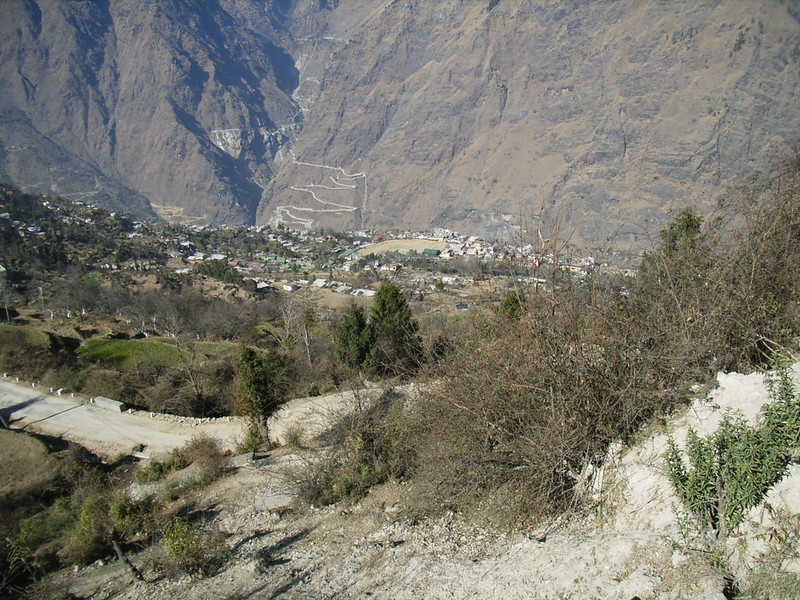 This movement of earth in the subsurface can cause the land to settle down, or ‘sink’ – a phenomenon called land subsidence. Studies show that the extraction of ground water can also cause subsidence. Heavy construction activities such as blasting and underground tunnelling (which, as per residents, currently occur in the landscape as part of the ongoing Tapovan-Vishnugad hydel power project) can aggravate the situation.

In fact, “vibrations produced by blasting and heavy traffic will also lead [to] disequilibrium in natural factors”, the 1976 Mishra report noted.

Joshimath residents attribute the cracks that have emerged on their lands and houses over the past year to the ongoing excavations for the construction of the Tapovan Vishnugad project nearby. The Tapovan Vishnugad project is a 520-megawatt hydropower dam across the Alaknanda river in Uttarakhand. In February 2021, 139 workers at the dam were among the many who lost their lives to a flash flood upstream of Joshimath.

“We have been repeatedly warning authorities about the irreparable damage caused due to several tunnel and hydropower projects in and around Joshimath and other parts of Uttarakhand,” said Atul Sati, a local environmental activist. “However, our voices were blatantly ignored and our worst nightmare has come true today. The entire responsibility of Joshimath caving in is on NTPC’s Tapovan Vishnugad Hydro Power Project.”

However, the NTPC has washed its hand clean of any link between its tunnelling activities for the project and land subsidence in Joshimath. In a statement put out on January 5, the company said that the tunnel being excavated for the hydel power project does not pass under the town, and is not linked to the cracks emerging across the town in any way.

Thus spake NTPC, absolving itself of all the destruction it has caused in and around Joshimath. Please see this thread to understand a dam company's role in destroying the area, and how the govt too is involved in pushing for disastrous projects. pic.twitter.com/imI4h8AFBv

But scientist Anjal Prakash, Research Director and Adjunct Associate Professor at the Bharti Institute of Public Policy and Indian School of Business, also attributes the disaster to the project.

“I am very much convinced that the Joshimath caving incident is caused by the hydro power project which has been operational in building the tunnel and was the major cause of concern for the residents,” he said. “It has shown that water which has gushed out is from a fractured zone which has been punctured by the tunnel that has been leading to the devastating situation that we are in today.”

Unplanned infrastructure development is a problem in the Himalayas which are a fragile ecosystem, he said. “The return investment cost in hydropower projects is very less when compared to the cost associated with environmental and ecological damage. Joshimath is a clear example of what one should not do in the Himalayas.”

There are several issues revolving around the sinking of Joshimath, said Upadhyay. One of course is the rampant construction activities in Joshimath town to support the influx and needs of tourists, pilgrims and armed personnel. Another issue is the lack of a proper drainage system for waste water and sewage within the town, said Upadhyay.

“Almost 90% of the town’s population is not connected to the existing drainage system and have to rely on soak pits,” she said. The sewage percolates to the ground and pushes soil sediments further below and can be another reason for subsidence, she added.

The lack of proper drainage facilities accounts for landslides, the 1976 Mishra report had also noted. Soak pits – which are deep pits in the soil for sewage disposal – can lead to water seepage and soil erosion. Incidentally, the report called for a “pucca drain system” as being a “vital necessity”.

Outside the town, bigger construction projects such as the hydel power and Char Dham projects are also responsible, Upadhyay added. Construction of the former that included underground tunnelling led to the accidental puncture of an underground aquifer in 2009, she said. As per one estimate, the water discharge was around 700-800 litres per second; even after a month, the aquifer hadn’t not dried up. According to Upadhyay, locals say that groundwater levels have reduced over time, and water scarcity is a concern.

The construction of tunnels for the hydro power projects is being done through blasting and this creates local earthquake tremors, shakes debris above rocks and again causes cracks, said Y. P. Sundriyal, Head of Department, Geology, HNB Garhwal University.

“Government has not learnt anything from the disasters of 2013- Kedarnath floods and 2021-Rishi Ganga flash flooding. The Himalayas is a very fragile ecosystem. Most parts of Uttarakhand are either located in seismic zone V or IV which are prone to earthquakes.”

Though the report of the Mishra Committee was clear, its recommendations and warnings have fallen on deaf ears for nearly 50 years now. One of the main recommendations of the report was to ensure that no tree be felled in the landslide area. Another was to place restrictions on “heavy construction work” in the area.

However, governments have pushed through several projects involving such “heavy construction” and felling trees without heeding these warnings. Construction to build the Char Dham project, for instance, involves widening an existing national highway to build all-weather roads of width of 12 to 14 metres with paved shoulders. The 900-km road project which aims to provide all-weather connectivity to four holy towns including Kedarnath and Badrinath in Uttarakhand has increased the vulnerability of the state to disasters, led to loss of forests, blockage of streams with muck and slope instability, Ravi Chopra, former chairman of a high powered committee that was appointed to study the impacts of the project and make recommendations, had told Hindustan Times. 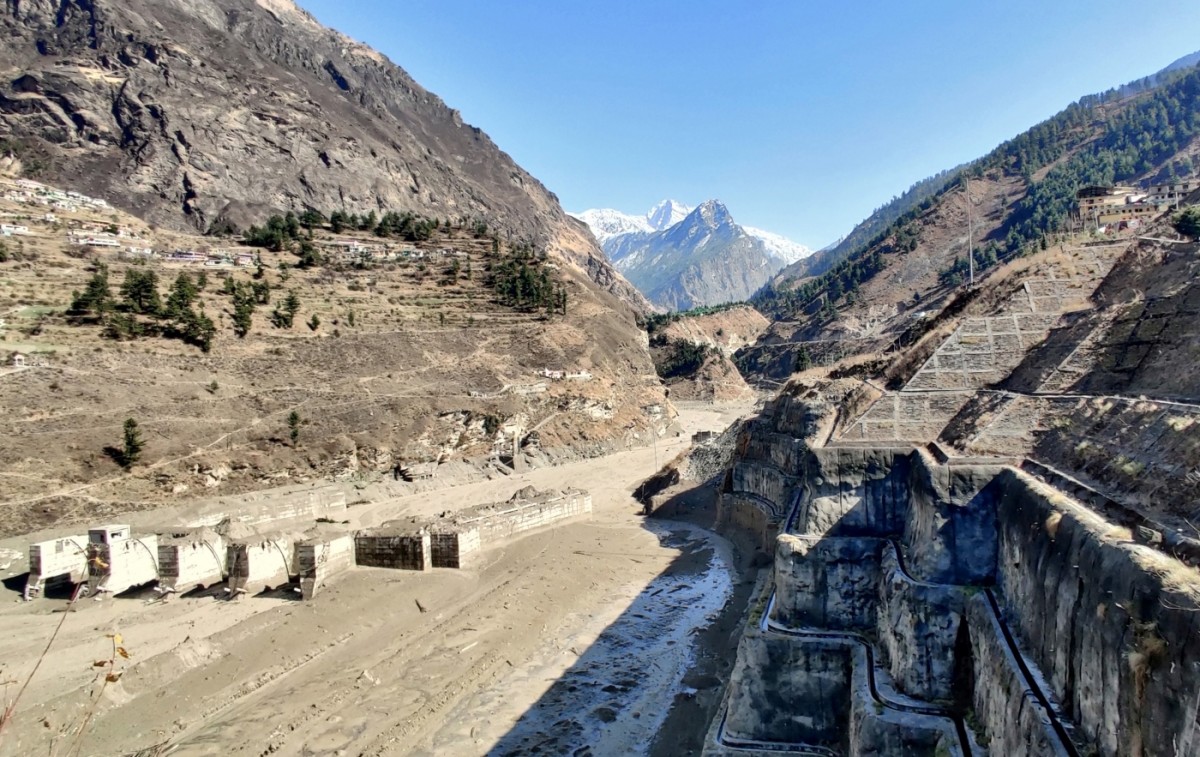 A view shows a damaged barrage after a part of a glacier broke away causing glacial flood in Chormi village in Tapovan, in Uttarakhand, India, February 7, 2021. Photo: Reuters/Stringer

According to Upadhyay, drilling and use of explosives for the construction of the Helang-Marwari bypass road that falls under the Char Dham highway has destabilised the town, making it more prone to landslides.

The Ministry of Environment, Forest and Climate Change also went so far as to misrepresent facts to push for seven hydropower projects – including the Tapovan-Vishnugad hydel power project – in Uttarakhand, reported Upadhyay in The Wire in October 2021.

There are also no studies on the impacts of construction within town or those caused by the hydel power project on land, said Upadhyay. In the case of the hydel project, the environment impact assessment was also conducted by a private entity and not the Geological Survey of India despite it being located in such a seismically sensitive zone, she added.

Peoples’ worst fears seem to be coming true: the cracks haven’t stopped at Joshimath. Similar phenomena are unraveling at several other towns in the area too, such as Raini and Karnaprayag. After residents noticed cracks in their buildings, a state government report in 2021 had warned that subsidence was an issue in the village of Raini, just around 20 km from Joshimath. However, no relocation or rehabilitation has been initiated so far, reported The Indian Express. Other towns in the landscape including Nainital will also soon face such concerns, experts told Down to Earth.

Local environment activist Sati of Joshimath has several demands of the government. One is to stall the NTPC-run Tapovan Vishungad hydel project immediately. Others include closing the Char Dham all-weather road (Haleng-Marwari Bypass), implementing the NTPC’s pact that insures houses, and developing a committee to rehabilitate affected people of Joshimath within a set time frame.

Planning is crucial as climate change also compounds the existing concerns, according to scientists Anjal Prakash and Sundriyal.

Climate change is a force multiplier and its manifestation in the hilly states of India has been unprecedented, said Prakash. Over the last two years, Uttarakhand has witnessed numerous climate risk events such as high rainfall events triggering landslides. We need to understand that these areas are very fragile and small changes or disturbances in the ecosystem will lead to “grave disasters”, which is what is happening in Joshimath, said Prakash.

“Joshimath is a very grave reminder that we are messing up with our environment to an extent that is irreversible.”