Jallikattu is Nothing But Animal Abuse and Machismo, Packaged as Tamil Culture and Tradition

Instead of defying the Supreme Court, jallikattu supporters should turn their energies and passion to finding ways to bring bulls back into agriculture and educate our polity and society about the virtues of native genes in agriculture and animal husbandry. 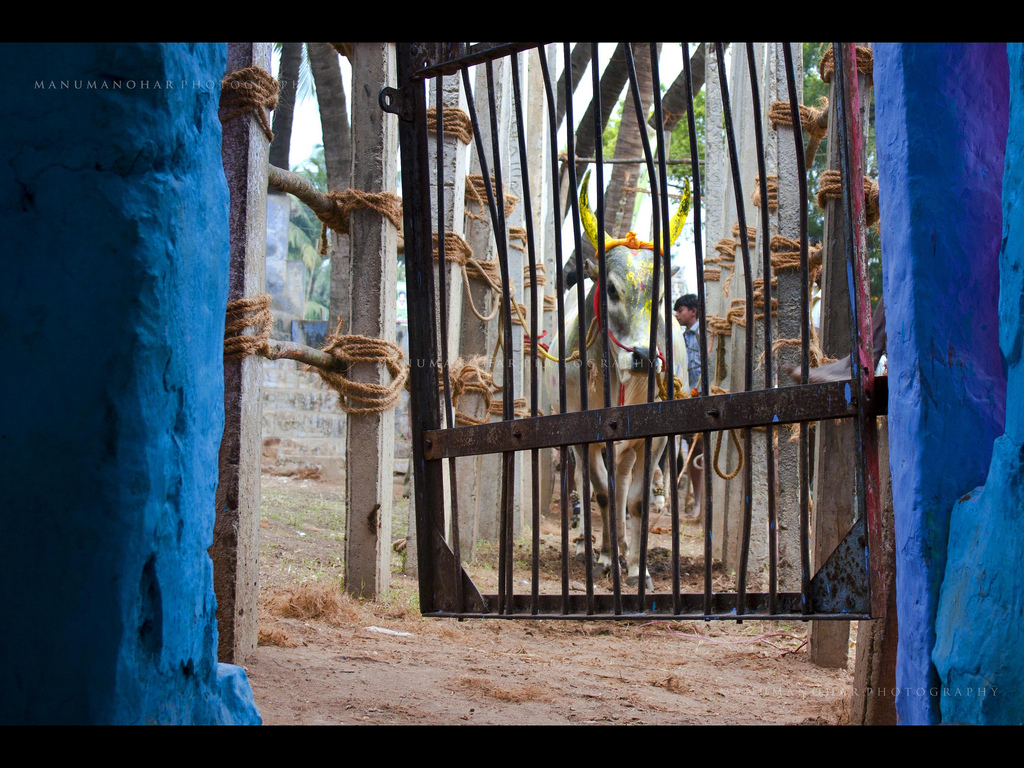 A bull waits its turn at the gate to the Palamedu jallikattu in Madurai. Credit: Manu Manohar/Flickr CC 2.0

The annual “silly season” is here and this year too, as since 2011, animal activists have to bear the brunt of frustrated jallikattu supporters whose primal masculine urge to hunt and control was administered a cold douche when the Supreme Court banned the cruel sport in May 2014.

Once a year, and sometimes twice a year, depending on the species, male hormone levels rise in animals –  sending them hunting for females to subdue, control and impregnate. We who work with animals call this phenomenon the “silly season”, when we have to attend to more than normal numbers of injuries among cats and dogs, more fatalities and more noise in animal shelters and on the streets. In elephants, silly season is called “musth”, when there is greater oelephant/elephant, elephant/man violence.  Jallikattu or “taming the bull”, like whaling and hunting, is also hormone-driven and a sublimation of this primal desire because in some parts of the civilized world men cannot turn at will on others, or hunt animals.

Jallikattu involves human-male combating animal-male for supremacy, and as advocates of jallikattu have confessed, the human-male/animal-male combat was historically only about the victor’s right to claim alpha male status in the local community two, three, four, five and now six thousand (the number of thousands rises with every telling) years ago, when Indian society did not have science for propagation of the species and shaadi.com and Tamil/Telugu/Kannada/Marathi matrimony was still in the human future. If the bull survived the collective human-male mauling in the jallikattu arena, it acquired the high status of alpha stud bull, which would be used to impregnate local cows for tried-and-tested breed superiority.

“Swayamvara” in the Indian tradition is a variation of the jallikattu theme. Far from being the woman’s right to choose her groom, “swayamvara” is actually about how patriarchy compelled the woman to offer herself as prize in the combat. The corollary being, she had to wed the victor of the competition even if the victor was unsuitable or ineligible in many different ways.

In the eco-feminist philosophy of truth, if jallikattu is indeed Tamil Pride and Tamil Culture, women are located somewhere between men and animals in the culture/tradition jallikattu bandwidth.

In this testosterone, adrenaline-driven world, women and animals have to submit to male desires; rejecting their advances or refusing to satisfy their desire for control invites swift and violent punishment; wife beating, rape, groping and molesting women in public places, internet trolling and threatening women with retribution for defying or rejecting patriarchal symbols of culture, “training” dogs, “breaking” horses, violently subduing captive elephants – abuse of women and animals stem from the same root. Women who support jallikattu, an inherently abusive and cruel masculine sport, like women ministers in government, women spokespersons of political parties, actors and women in other spheres of public life, who fail to see or refuse to see the common basis underlying the “objectifying” of women and animals do so as price for the privilege of being allowed to co-habit with men in Man’s World. It is indeed a sad day for humans when women lose their femininity and feminist understanding of the world we inhabit.

Feminism is acknowledging and bravely asserting the incontrovertible truth that there is no creation without the feminine component and no procreation without the female; it is also accepting the truth that phrases like “we worship women” and “we worship the bull” – like the other more well-known western cultural given “motherhood and apple pie” – is only to try and bury deep into the ground the fact that no matter how wholesome and gender-neutral the ultimate truth, culture and tradition in Hindu society is man-driven and is of the man, by the man and for the man. We worship women, we worship bulls, we worship rivers, mountains and animals – all of this sounds very comforting but does not explain what people in Tamil Nadu and the rest of the country have done to protect and care for animals – especially temple cows and elephants –  lakes and tanks, mountains and rivers. The Cauvery and the Ganga are among the most most polluted rivers in India.

Feminism was born as a reaction against the evil of anti-woman patriarchy; it evolved as eco-feminism because patriarchal economic models and institutions are as anti-animal and anti-environment as they are anti-woman and womanhood. The governing truth of eco-feminism is that the basis of all abuse is the same – objectifying the victim, justifying the use-misuse and exploitation of the object and in the end even killing or destroying them as ultimate demonstration of masculine power.

Leaders of all political parties in Tamil Nadu, without exception, including the state unit of the Bharatiya Janata Party, which is the ruling party in India, contributed and proactively fuelled the mass hysteria which has brought the state to a grinding stop. They made public pronouncements that Tamil men should disregard the May 2014 Supreme Court order and conduct jallikattu, rekla and manjavirattu. Tamil Nadu’s political parties openly thumbed their noses at the Supreme Court because the apex court refused to be pressured into issuing any interim order before Pongal.

In the days preceding and following Pongal, people emboldened by the explicit support of all political parties, conducted jallikattu, rekla and cock-fights in Madurai, Coimbatore and Dindukkal; in Vaniambadi, a frightened bull which was let loose among an appreciative “Tamil Pride” audience, gored one Shanmugham to death – an ugly truth which all media houses kept under the wraps for more than 24 hours. In a place called Yadgir, in north Karnataka, people threw live sheep and goats off the mountain in what they claim is their religious culture and tradition. In Telangana and Andhra too, animal abusive sports were held in open defiance of the Supreme Court order.

If the Modi government were to succumb to mob frenzy and do anything to subvert the May 2014 order of the Supreme Court banning jallikattu, rekla, kambala and manjuvirattu, and if the Prevention of Cruelty to Animlas Act (1960) were to be weakened further by an amendment to the law simply to make jallikattu possible, then let us be clear – goat throwing in Karnataka, buffalo-fighting in Assam and bulbul fights will also come back in a bloodier, more violent, and more frenzied manner than before.

Tamil pride like Telugu, Kannada and Assamese pride is a polite term for animal abuse in the name of culture and tradition – where “pride” is coterminous with primitive machismo.

In discussion after discussion in Tamil and English news channels, jallikattu organizers, representatives of various political parties without exception and jallikattu supporters had little to say in justification of the blood sport or their defiance of the Supreme Court except unconvincing, hollow and high-falutin’ arguments which fail rigorous logic and reason. Animal activists are forced to conclude that the more frustrated the primal masculine desire to control and shed blood, the less cerebral the response.

There are four oft-heard, unsustainable arguments that jallikattu supporters make against animal activists

Had the Animal Welfare Board of India organised the same convention on bio-diversity with dairy farmers, small agriculturists and Indian experts in the field, in Gurgaon or Gudiyatham, it is doubtful if the proceedings and resolutions of the convention would be cited with the same sense of breathless self-importance and infallibility. However, these arguments have been dealt with effectively in other articles exactly a year ago.

Jallikattu supporters, as was seen in televised discussions over the past 10 days had no answers for why, if science could replace the bull in agriculture, science cannot replace jallikattu for protecting and propagating native breeds of cattle. If jallikattu was one method to find a strong, virile male as grooms for their daughters (if women preferred muscle over mind), parents have genetic mapping and DNA testing as scientific alternatives and there is always Tamil Matrimony and shaadi.com. Animal activists must counter the profundity of the “Rio-de-Janeiro Convention on Bio-diversity” with the profundity of the well-evolved cultural anthropological arguments for selecting virile grooms and for protecting native genes in cattle. As for A1 milk, the dairy industry – dispensing homogenized milk and closely linked to the hide industry – and hybrid breeds of cattle imported from foreign lands and hybrid and high yielding seeds in agriculture – killed native breeds in seeds and cattle, decades before jallikattu became a mass-hysterical movement.

Jallikattu supporters should turn their energies and passion to finding ways to bring bulls back into agriculture and educate our polity and society about the virtues of native genes in agriculture and animal husbandry. That would be nation-building and that would raise Tamil culture to hitherto unseen heights. Tamil culture is not uni-dimensional and jallikattu is not integral to celebrating a good harvest. Worshipping the sun, soil and water, and celebrating the cattle which gave us a good harvest, is the best way to acknowledge our gratitude. Whipping and prodding a frightened bull into an arena with thousands of spectators enjoying the sight of a terrified animal with 20 men in hot pursuit to show the bull who is boss, is not Tamil culture, much less Tamil pride. It is animal abuse, and Tamil machismo packaged as culture and tradition.

The author of this article wishes to remain anonymous in light of the threats that have been made against people in Tamil Nadu opposing jallikattu.

Note: This article earlier stated that A1 milk is nutritious and A2 milk is unwholesome. It is the other way around and the mistake has been corrected.