A report published by the National Remote Sensing Centre in Hyderabad was later taken down from its website. The Uttarakhand state authorities have claimed that the report is not the institute’s 'official take'. 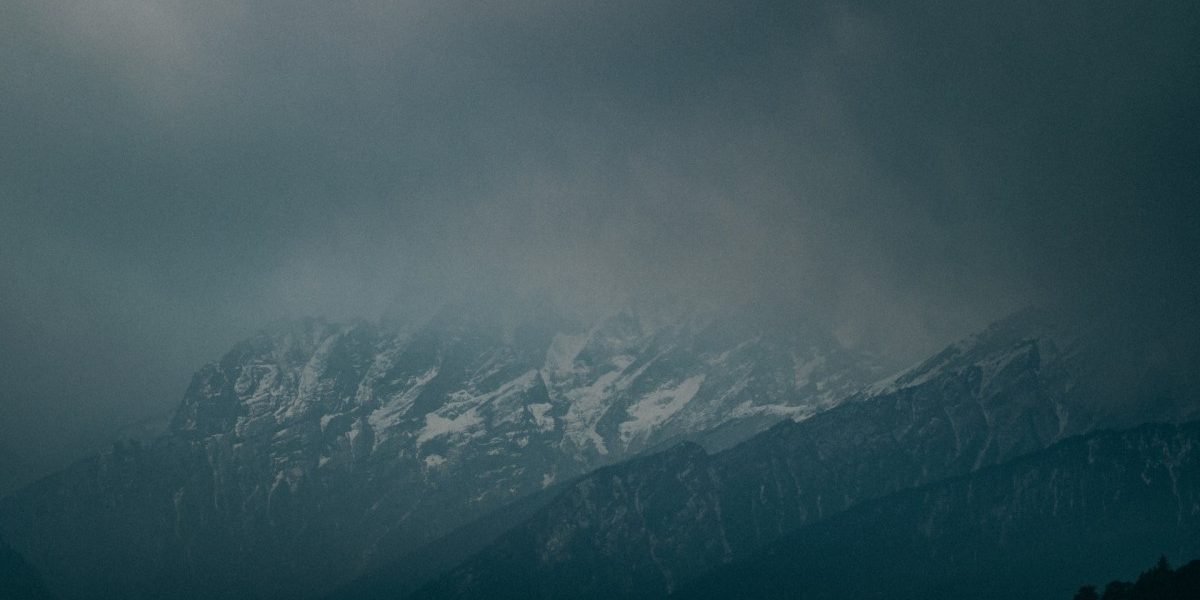 Kochi: Joshimath — the Uttarakhand hill town that faced land subsidence, or sinking of land, earlier this month prompting authorities to relocate more than 150 affected families — witnessed two events of subsidence, as per a report by the National Remote Sensing Centre, Hyderabad.

Between April and November 2022, Joshimath underwent slow subsidence wherein land sank by around 9 cm; and later, a rapid subsidence event (causing land to sink ~5 cm) occurred over a span of just 12 days in December-January, per the report released on January 11.

The report, however, is no longer available on the NRSC website. Uttarakhand state authorities have claimed that the report is not the institute’s “official take”.

The Union government meanwhile, went one step further: the National Disaster Management Authority on January 13 imposed a gag order on scientists from government institutes, preventing them from interacting with the media or sharing data on social media regarding the Joshimath incident. 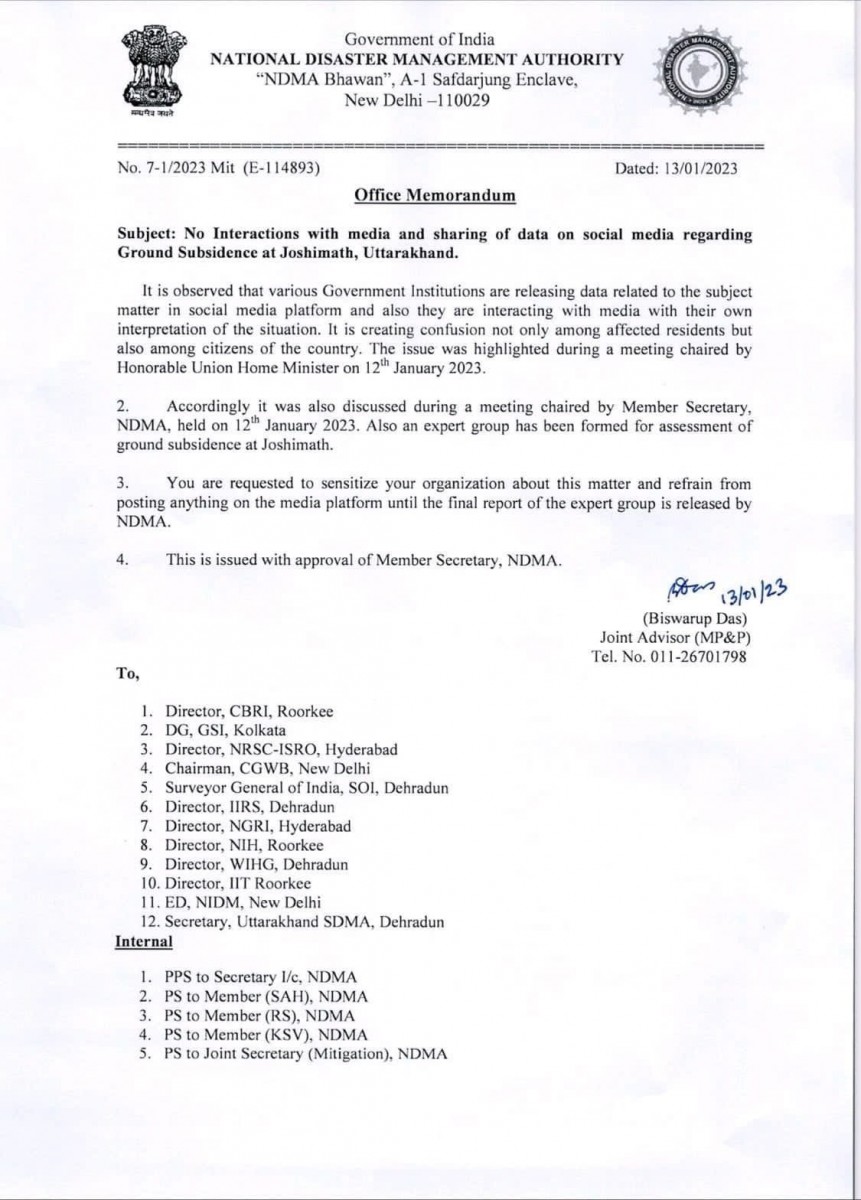 The gag order imposed by the NDMA. Photo: By arrangement

Joshimath faced two subsidence events between April 2022 and January this year, according to preliminary results released by the Indian Space Research Organisation’s National Remote Sensing Centre (NRSC). As per the report, which The Wire accessed, scientists used Sentinel-1 Synthetic Aperture Radar (SAR) imagery, a type of radar technology that bounces off signals from sensors on satellites (in this case, Sentinel 1) onto the earth to obtain 2D or 3D reconstructions of physical features such as mountains, to identify the location and extent of subsidence in Joshimath. Doing this over time reveals the extent to which the subsidence occurred. As per the report, the NRSC also used new Cartosat-2S satellite data — which provides very spot-specific, high-resolution images — in this process. 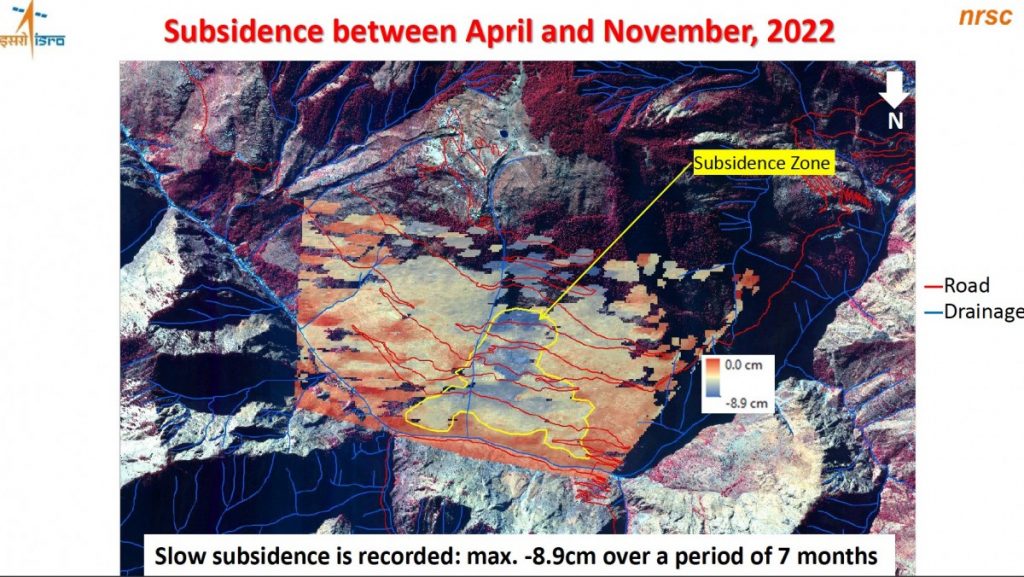 The report found that between April and November 2022, Joshimath recorded slow subsidence of up to 8.9 cm. However, between December 27, 2022 and January 8, 2023, the same area witnessed a rapid subsidence event in which land sank by up to 5.4 cm in a span of 12 days.

Sentinel 1 SAR combined with other conventional remote sensing data is a promising new methodology, and similar to the technique that scientists used to ascertain that land subsidence has occurred in New Delhi due to groundwater extraction, commented Jagdish Krishnaswamy, an ecohydrologist who has also worked on the environmental applications of remote sensing and GIS and currently head of the School of Environment and Sustainability at the Indian Institute for Human Settlements, Bengaluru. The studies he referred to (one in the Journal of Hydrology and another in Scientific Reports) were published last year and found land subsidence in two areas in the National Capital Region, Faridabad and near the Indira Gandhi International Airport. Krishnaswamy said that early-warning systems based on this methodology could help detect land subsidence due to ground-water exploitation or other factors in some regions of the Himalayas and in areas with alluvial deposits.

To ascertain more specifics, the NRSC is also using an InSAR technique, which combines two or more SAR images to interpret the differences between them to better decipher the changes on the earth’s surface. “Analysis of temporal InSAR is ongoing to identify landslide kinematics and results will be further updated,” the brief report finally read. 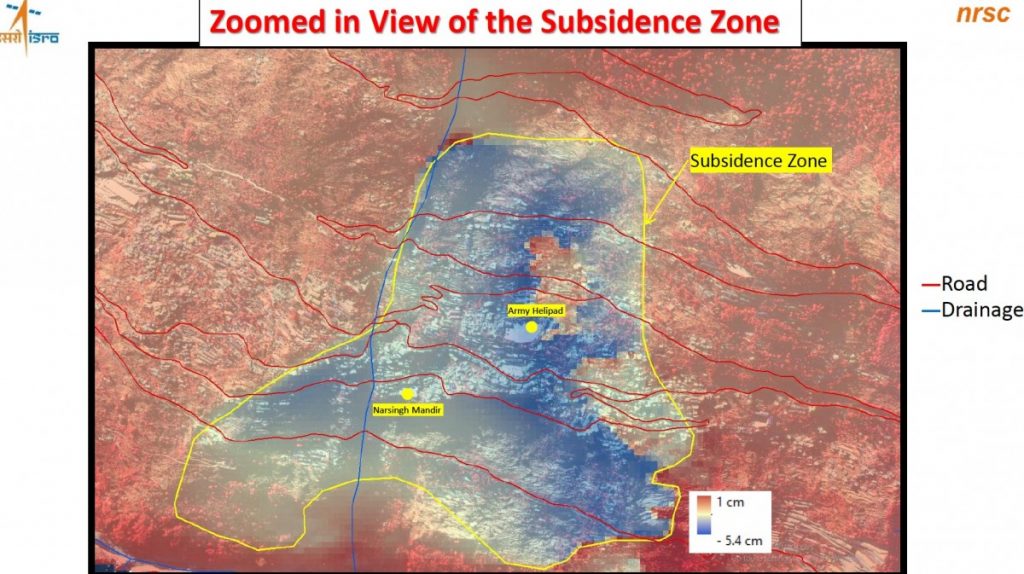 State authorities, meanwhile, claimed that the NRSC report is not an ‘official’ document. Uttarakhand Minister of Health, Education and Cooperative Dhan Singh Rawat said on January 13 that the report was not “their [ISRO’s] official take”.

I have spoken with the ISRO Director. They have accepted that this is not their official take. They will give their official take today on the current situation: Uttarakhand Minister Dhan Singh Rawat on ISRO’s satellite images on Joshimath sinking pic.twitter.com/lYo4gNm9dF

However, there has been no official take from the NRSC so far, and the report is also no longer available on the NRSC website. The Hindu quoted a senior scientist at the NRSO as saying that the report was removed because it was being “misinterpreted”.

As important data – released by a government institute – is being withdrawn from the public domain, the government is also leaving no stone unturned to limit information available on the incident.

On January 13, the National Disaster Management Authority (the apex body for disaster management in India, headed by the Prime Minister) issued an Office Memorandum (OM) to several research institutes including the Indian Institute of Remote Sensing in Dehradun and the Geological Survey of India in Kolkata ordering that scientists in these institutions not interact with the media or share data on social media about land subsidence in Joshimath. Various government institutions are releasing data on this in social media and interacting with the media “with their own interpretation of the situation”, the order said.

“This is creating confusion not only among affected residents but also among citizens of the country,” the OM said.

Uttarakhand Chief Secretary S.S. Sandhu also said on January 13 that all work at the NTPC tunnel will be closed till further orders. He added that eight institutes are analysing the reasons for the land subsidence and that their probe would include the role of NTPC’s Tapovan-Vishnugad project, reported Times of India. Sandhu also said that authorities have been addressing the land subsidence at Joshimath as a natural disaster and not man-made because the town is located on a landslide.

On January 13, Ravi Chopra, who chaired the High Power Committee high powered committee that made recommendations on the Char Dham Pariyojana, said that there was “adequate reason to believe that what we are witnessing today is a result of the tunnelling exercise conducted by NTPC” while referring to a 2015 study that analysed the sudden water inflow in the area after the tunnelling events in 2009 and 2012.

Meanwhile, the Times of India reported on January 15 that as per an unnamed official source, a ground survey revealed that parts of Joshimath may have sunk by almost 2.2 feet, far higher than the NRSC figures of subsidence.

Some scientists said that the Western and Eastern Ghats could face threats similar to the one Joshimath is now witnessing if developmental activities are not stopped, reported The New Indian Express.

However, Krishnaswamy, who has also studied several aspects including hydrology in the Western and Eastern Ghats, said that he would not equate the situation in Joshimath, which is located in the Himalaya, to sites in the Western or Eastern Ghats. The Himalaya are the youngest mountains with uplift continuing and in a seismic zone that is therefore tectonically active. It is very different in terms of geology and geomorphology when compared to the Ghats, said Krishnaswamy. Joshimath, moreover, is built on landslide debris. The Western and Eastern Ghats have a lot of other issues including landslides triggered by extreme rain events but the location of development projects and towns on glacial deposits and landslide debris is a distinct feature in the Himalaya, he said.

There are numerous factors, including the type of rock that a region rests on and the moisture regime, that cause land subsidence or landslides and this varies with every location and situation, Krishnaswamy added.

Also Read: Band-Aid Solutions Will Not Prevent Future Joshimaths in the Himalayan Region

News agency PTI had reported that as per a press release by the Indian Institute of Technology Ropar, Punjab, researchers at the institute had predicted a large-scale surface displacement in Joshimath town as early as 2021. The team used a type of InSAR technique called Persistent Scatter and combined it with Sentinel 1 data.

“We were studying the Chamoli flood disaster and while doing that, found a subsidence of around 2-3 cm in April 2021 in the Joshimath town area,” IIT Assistant Professor Reet Kamal Tiwari, who was also part of the study, told The Wire. “This is so that we explored that as well and used a model to predict the future of that site.”

As per the news report, their study predicted a displacement of 7.5-10 cm for buildings in Joshimath city, enough to cause cracks in buildings similar to what is occurring now, the press release said. The IIT team presented their findings at a conference in 2021. The results will also be published soon as a peer-reviewed study, and is currently under review with Natural Hazards Research, an Elsevier journal, Tiwari told The Wire.