According to IMD, the heatwave scenario is likely to continue over northwest, central and peninsular India over the next two days.

A farmer and two policemen lost their lives in Rajasthan on Sunday due to a heat stroke. Two people also died in Sabarkantha and Rajkot districts of Gujarat. On June 3, Churu in Rajasthan was the hottest city in the country with a maximum recorded temperature of 49.8° Celsius, followed closely by Sri Ganganagar – also in Rajasthan – at 48.6° Celsius, according to the private weather forecaster Skymet. In fact, seven of the top ten cities with maximum temperatures were in Rajasthan.

Globally, eight Indian cities were among the 15 hottest places around the world, according to the weather website El Dorado. The other seven were in neighbouring Pakistan with Jacobabad in Sindh recording a high of 51.1° Celsius.

The heatwave scenario is likely to continue over northwest, central and the adjoining peninsular India over the next two days according to the Indian Meteorological Department (IMD).

“There is unlikely to be any major relief from the heat in the coming days particularly over north west India, Maharashtra and Madhya Pradesh. Parts of south India could see relief after the monsoon hits Kerala on June 6. But, other parts of the country will have to brave the situation,” Anand Sharma, deputy director general at IMD, told The Wire. 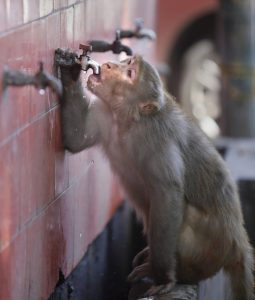 In the next couple of days, there is likely to be minor relief in parts of Punjab, west Uttar Pradesh and Delhi due to a change in wind direction which could bring down temperatures by  2 to 3 degrees. The drop in temperature, however, is likely to be offset by an increase in humidity which will ensure that the discomfort levels remain quite extreme.

High humidity levels are particularly dangerous because the human body’s natural cooling process of sweating is impeded due to high levels of moisture in the air. Our body cools through the process of sweating. As the sweat evaporates off our skin, it takes some of the excess heat with it.

At high levels of humidity coupled with high temperatures, sweat continues to be produced but its evaporation is reduced. This in turn reduces the cooling effect on the body.

A 2018 report of the National Institute of Disaster Management revealed that 22,562 persons lost their lives due to heat waves in India between 1992 and 2015.

A recent paper by P. Rohini, M Rajeevan and A.K. Srivastava, found that in central and north west India heat waves are occurring more frequently and for longer durations. “This warming trend is likely to continue in future climate in view of increasing greenhouse gases,” the authors noted in the summary.

Rajeevan, who is the secretary of ministry of earth sciences, has also emphasised how global warming is causing changes in the climate conditions and extreme weather events.

“Temperatures are increasing during both day and night time. Heat waves are increasing in frequency as well as magnitude. Extreme rainfall and rainstorms which can cause floods are increasing. Dry spell duration is also increasing,” he told the Indian Express in January this year. In the last few days, large parts of north west, central and peninsular India have also seen unusually high minimum temperatures. The mercury did not dip below 35° Celsius in Rajasthan’s Phalodi – a departure of almost 9° Celsius from the average.

In several other stations too, the minimum temperatures recorded were greater than 30° Celsius – between 3 and 5 degrees above normal in most cases.

A study by Saurav Mukherjee and Vimal Mishra at the Indian Institute of Technology Gandhinagar published in November 2018, found that the occurrence of concurrent day and night heat waves extending for more than three days have shown an increasing trend in western, north-eastern and southern India post 1984.

It also found that if global mean temperature rise is limited to 2°Celsius above pre-industrial levels – as envisaged by the Paris climate agreement – concurrent day and night heat waves could go up six-fold in India.

Half the country reeling under drought

What makes matters worse is that about 46% of the land area in India is reeling under drought conditions, according to IIT Gandhinagar’s drought early warning system, a real time drought monitoring tool. 26% of the country is under either the extremely dry or exceptionally dry categories. Young boys take a dip in the Narmada river to cool off in Jabalpur, on June 2, 2019. Credit: PTI/Kamal Kishore

The problem has been ongoing since the south west monsoon of 2018 saw a 9.4% deficit in rainfall. In all,  252 of the 727 districts in the country recorded deficient rainfall according to a response by the government in the Lok Sabha in February 2019.

Subsequently, the north-east monsoon, or the retreating monsoon during the months of October and November, also underperformed. It was deficient by 44%.

The pre-monsoon rains between March and May this year have also been deficient by 25% – the second driest since 1965.

Things could get worse as the south west monsoon of 2019 could also underwhelm. According to the IMD, there is a 47% probability of a below average monsoon in 2019. The areas where the deficits could be highest are north west India and north east India.

Skymet, on the other hand, has forecasted a 60% chance of a below normal rainfall. It has contended that east and central India could see deficient monsoons and the month of June would see only 77% of average rainfall.