For true impact on the ground, there needs to be healthy dialogue between those who create information, those that distribute it and the decision-makers.

I recently re-read the book Tipping Point by Malcolm Gladwell. I enjoyed reading it in 2003-04 and enjoyed going through it again, the long explanations, stories in stories, and how simple concepts led to big changes in various fields.

One recurring theme in the book is about the three agents of change: (a) connectors – network of likeminded people; (b) mavens – information specialists; and (c) salesmen – persuaders. This got me thinking about parallels in the world of air pollution. I see myself as an atmospheric scientist, but where is my place in the field of air quality management? Similarly, what is the role of likeminded people in this space, who are trying to push for a change – moving from dirty air to clean blue skies?

Following the same three-agents principle, I see three interlinking groups working in the field of air pollution: (a) Feeders (b) Drummers and (c) Changers.

This person can also be dubbed as the “collector”, whose responsibilities are to connect dots (and people), collect information (modelling and monitoring), and present relevant information on air quality to everyone. In simple words, feed information to the other two groups.

Also Read: Does India Have the Skilled Workforce Needed to Fight Air Pollution?

I consider the community of academicians, doctors, data analysts, engineers, researchers, mappers, scientists, students and likeminded citizens as the part of this group. They constantly try to understand the science behind the problems (for example: why is ozone pollution worse at traffic intersections) or crunching numbers to make sense of an otherwise obscure statement (for example: public transport is good for us vs a bus is an efficient way to transport 60 people at the same time) or mapping the problem using data from ground and satellite measurements.

This person can also be dubbed as the “noise-maker”. Their main responsibilities are to point out the problems, debate the merits and the demerits of an environmental process or a legislation and demand change.

I consider the community of activists, artists, communication specialists, doctors, lawyers, media (newspaper, internet, radio, and television), scientists and citizens as part of this group. They do not hesitate to raise their voice for a good cause (for example: is it better to have an air conditioner or an air purifier inside the house or outside the house; what is the best way to mobilise against air pollution; how best to present information on social media to get maximum reaction, etc). 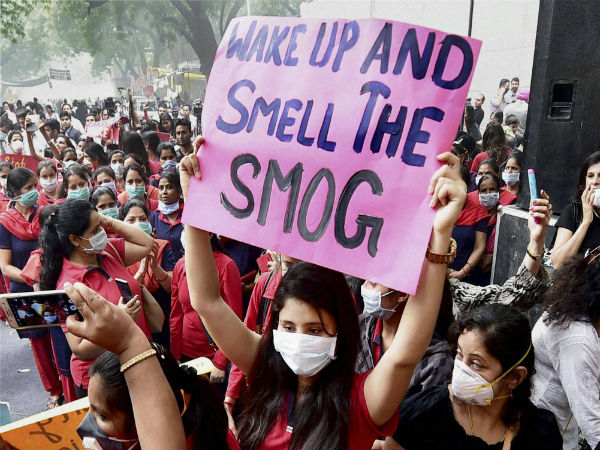 A protest against the high level of air pollution at Jantar Mantar in New Delhi. Credit: PTI

This person can also be dubbed as the “decision-maker”, who ultimately decides what is to be done for the environment. Whatever the messages are from the Feeders and the Drummers, it is the decision made by the Changer that will make the environment better or worse.

I consider the government (ministers, secretaries, etc) as part of this group, as it has the authority to decide what to change (for example: let us put 10,000 buses in our city; let us invest in encouraging the use of cycling and walking in our city; let us improve the waste collection process to curtail open burning, etc).

If the goal is clean air for everyone, it is important that the Changer is part of the dialogue. We need this group to acknowledge the harmful nature of air pollution and understand how to counter this problem. For example, we have multiple research groups (Feeders) working on quantifying the health impacts of air pollution; we have multiple civil society groups (Drummers) spreading messages from these studies; we have doctors (Feeders and Drummers) showing evidence that links air pollution to health and forming alliances to raise concern against air pollution; we have lawyers (Drummers) filing cases to demand change; and then we have the minister of environment (Changer) dismissing the deteriorating nature of air pollution in Indian cities and the associated health impacts. So, no matter the credibility of messages from the Feeders and the Drummers, it is the message from the Changer which often weighs the most when the time comes to make an intervention.

Deeper understanding and consensus to make the change

Our challenge today is two-fold: (a) we need the information to understand the problem deeper, prioritise efforts to reach the clean air goals faster, and to increase the awareness of the public and public bodies; (b) we need the consensus and willingness of the government to make the change.

The first part is an independent effort which often leads to reports, journal articles, news, infographics, workshops and meetings, with considerable overlap between non-governmental and governmental institutions. For example, while the modelling efforts are sustained by individuals and institutions, the monitoring efforts are carried out by pollution control boards. Today there are some independent groups contributing to the monitoring efforts, but we still rely on the official numbers for most of the analysis. From time to time, we also see government officials participating in workshops and meetings. All these efforts enhance our understanding of the air pollution problem and allow us to play with some what-if scenarios, like (a) what are the main pollution sources in a city; (b) what happens if no petrol and diesel vehicles are allowed to register from 2025; (c) what is the outlook of coal usage for power generation, etc.

However, just these efforts will not result in clean air. For true impact on the ground, we need the Changers to acknowledge the problem and implement these what-ifs as soon as possible and as much as possible. Till then, the efforts of the Feeders and the Drummers remain studies.

There are unique skills involved that make you special to be part of these groups, all three of which we need.

I am a full-time Feeder and a part-time Drummer.