In Western Maharashtra, the Possibility of a Man-Made Deluge

Activists blame the Maharashtra government for the recent deluge in Kolhapur, alleging that flood lines of the Panchganga river were redefined to provide benefits to the builders. 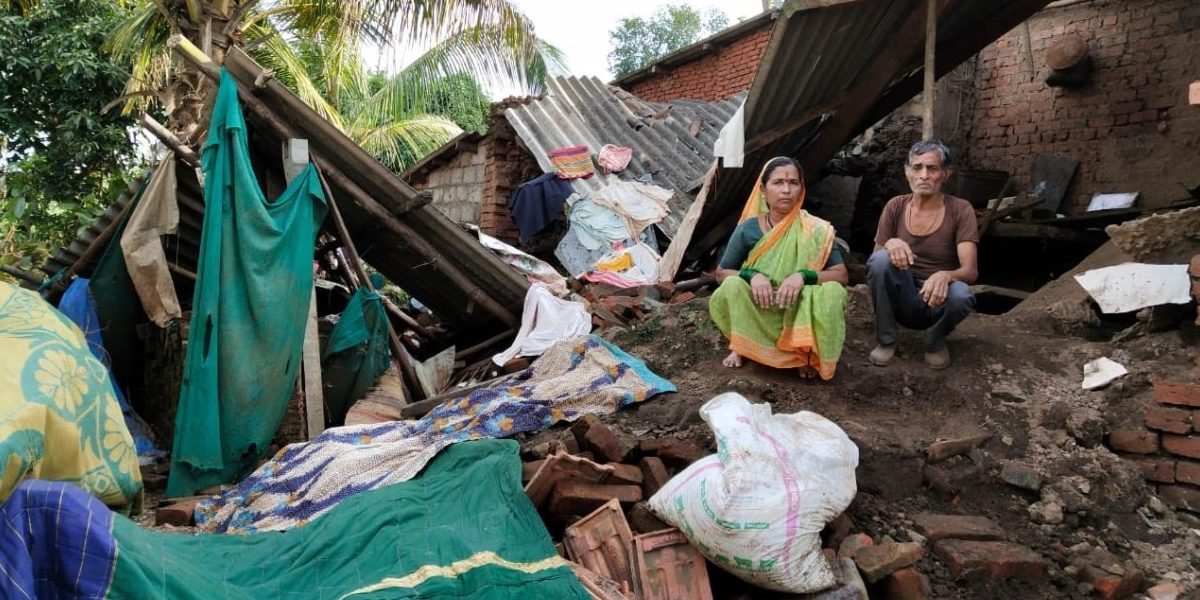 Water levels as high as 10 to 12 feet did not recede for two days. Photo: Kanchan Srivastava

Chandrabhaga Varote, a sculptor from Arey village in Karvir Taluka of Kolhapur district in Maharashtra, used to make idols of deities for a living, till the first week of August 2019. Her small but pakka house collapsed on August 8 rendering her homeless and jobless.

The low-lying areas of Arey, which have a population of around 3,500, remained submerged in water for almost four days when most parts of the district including the city of Kolhapur were inundated following incessant rains and spilling over of rivers and dams.

“It was a catastrophe as water levels in the village were as high as 10-12 feet which didn’t recede for two days. Our pakka houses collapsed destroying all valuables,” says Varote who is living at an acquaintance’s house situated on higher grounds in the village just like the 50 other families of the village.

Forty-nine-year-old Rajendra Bali Patil, a resident of Kothli village of Karvir Taluka, who has been at a neighbour’s place ever since the flooding, rued: “How long can we stay at our neighbour’s place? It requires at least Rs. 200,000 to build two rooms, a kitchen, and a toilet which we don’t have. The compensation given by the government is meagre.”

Arey and Kothli are among 600 villages in Sangli, Kolhapur and Satara districts of Maharashtra which were battered by the decade’s worst monsoon. Over 50 people lost their lives and more than 10,000 families lost their houses. The monsoons destroyed sugarcane and banana crops of most farmers in the district.

Many of these villages are located on the banks of Panchganga, Bhogavati, Koyna, Warna and other rivers which are tributaries of Krishna, the largest river in Maharashtra which flows through Satara, Sangli, and Kolhapur and then runs through four states before culminating into the Bay of Bengal.

Each one of them was overflowing following incessant rains between August 5 to 8 this year, totaling around 900 mm of rain, which was over 400 percent above normal, an official from India Meteorological Department said.

Was it the ferocity of nature that caused such a great calamity or did human interference aggravate the situation? Government and environmental activists differ.

The Bharatiya Janta Party-Shiv Sena led Maharashtra government believes that excessive rains triggered the floods. “In 2005, Sangli experienced 200 percent rain in 31 days. In 2019, 750 percent of rainfall occurred in nine days alone. In Kolhapur, 31 days of 2005 recorded 160 percent rainfall while in 2019, Kolhapur saw 180 percent rainfall in nine days. The rainfall all over was unprecedented. The combined effect of the Krishna, Koyna and Panchaganga rivers caused the current flood situation,” Maharashtra Chief Minister Devendra Fadnavis said at a press conference after a tour of Sangli.

Also Read: ‘Climigration’: When Communities Must Move Because of Climate Change

Environmentalists disagree with the government’s stand, blaming the massive construction in the prohibited zones of the floodplain of the river Panchganga as the prime reason for floods and devastation.

Pune-based environmental activist Sarang Yadwadkar said, “There has been massive construction alongside all rivers in Sangli and Kolhapur. Encroachment on riverbeds has reduced their carrying capacity of floodwaters over the years. Therefore, after heavy rainfall, swollen rivers ruptured their banks and floodwater gushed through houses built on the floodplains leading to major devastation.”

Floodplains, the flat land along the river, provide the space for rivers to spread their waters. “When this space is encroached upon, river ecology (such as its capacity to hold extra water changes) is drastically impacted. Deforestation and sand mining make the area more vulnerable to floods,” said environmentalist Vikrant Tongad.

Similar reasons were said to be behind the recent floods in Kerala and Tamil Nadu and Kashmir.
Unfortunately, India lacks regulations with regards to the protection of river floodplains, experts said.

“Irrigation departments of different states carry out periodical assessments of flood lines primarily to save the rivers from industrial pollution. Though Union Ministry of Environment, Forest and Climate Change had drafted a River Regulation Zone (RRZ) notification a decade ago on the lines of Coastal Regulation Zone, it is yet to see the light of the day,” said river expert Manoj Misra.

Misra also pointed out that the RRZ policy is now under the purview of newly formed Jal Shakti Ministry which has further delayed the process. “The notification is important not only for river ecology but also for the life and property of people who live in floodplains owing to lack of knowledge.”

Maharashtra had an RRZ policy in place since the year 2000 but the policy was withdrawn in 2015 by the Bharatiya Janta Party-led government.

“The state had witnessed a flurry of constructions in river beds ever since. Massive construction in the Panchganga floodplain has taken place. Several upcoming projects are in the restricted red zone as well,” admitted a government official requesting anonymity.

A Supreme Court-appointed committee has recently suggested that the government should restore the policy. Besides, experts associated with South Asia Network on Dams, Rivers, and People (SANDRP) said that sudden discharge by many dams in the upper Krishna basin with no coordination with Almatti dam in lower Krishna basin added to the flood fury in Maharashtra and Karnataka both.

Activists blamed the Maharashtra government for the recent deluge in Kolhapur, alleging that flood lines of the Panchganga river were “redefined” to provide benefits to the builders.

Environmentalist Sarang Yadwadkar, whose petition prompted the National Green Tribunal (NGT) to issue directives to Maharashtra in 2015 to mark the flood lines of all rivers in the state, said, “The water resources department (WRD) of Kolhapur drew the flood lines of Panchaganga and five other rivers in 2018. The fresh lines were different from the previous markings of the department that were incorporated in the development plan (DP) of the city a decade ago.” 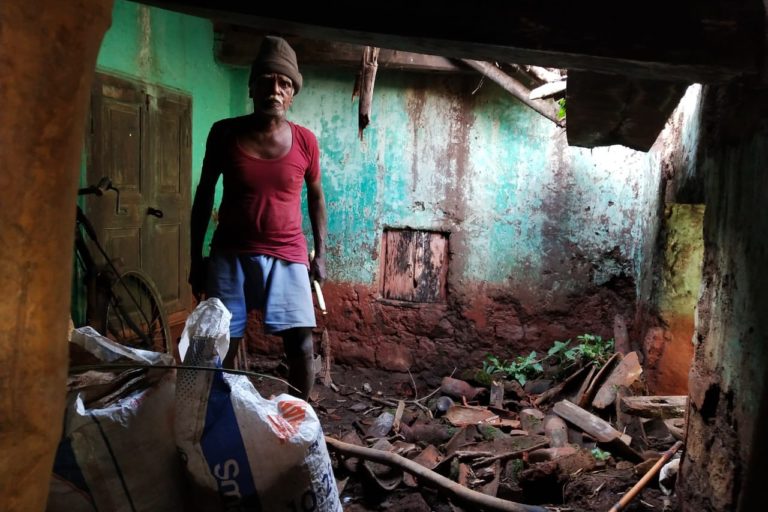 Over 50 people lost their lives and more than 10,000 families lost their houses. Photo: Kanchan Srivastava.

Flood lines are marked along the banks of a river indicating a potential threat of floods. The innermost line or “blue line” marks the flood occurrence in the last 25-years, while the outer “red line” demarcates a 100-years flood occurrence. No construction is allowed up to the blue line. Restricted construction is allowed in between blue and red lines. A land beyond the green line has no restrictions.

In the fresh markings, the WRD sought to correct its mistake following which over 1,250 acres of land (mostly residential) became a no-development zone. The map was verified by the Indian Institute of Technology, Mumbai on July 25, 2018.

Yadwadkar alleged, “Hundreds of existing, ongoing and proposed residential and commercial structures were in jeopardy due to the fresh mapping. Builders’ body approached the chief minister (CM) seeking relief.”

As per the RTI documents procured by activists from the Kolhapur Municipal Corporation (KMC), the Confederation of Real Estate Development Association of India (CREDAI), Kolhapur wrote a letter to CM on October 9, 2018 citing that new flood-lines may cause confusion and fear-mongering as most of the areas under the new flood-lines fall under the residential zone and a large number of structures have been constructed on it.

The letter urged that the old flood lines be maintained.

The letter by the builders was received by the chief minister’s office on  October 31, 2018, and on November 2, 2018, the CM wrote a note addressing the secretary irrigation that “the flood line incorporated in the DP should be restored”.

Also read: They Helped the Forest Grow. But in the Face of Climate Change, They’re Helpless.

Following the chief minister’s note, the WRD wrote a letter to the director of Maharashtra Krishna Valley Development Corporation asking the latter to restore the previous flood lines as per the suggestion made by the chief minister at the request of CREDAI.

However, the same WRD told KMC on January 11, 2019, “The previous red, blue-green lines are not the flood lines but the flood levels based on observation of locals. And another set of lines are being readied based on scientific methods. Hence, old markings shouldn’t be used.”

“The letter also warns the civic body to be on the alert during monsoons if the old flood lines are maintained as the legal ones,” said Yadwadkar citing the dual stand of the WRD.

Yadwadkar said, “The chief minister favoured the builders’ interests over the interests of the citizens. Why should the politicians intervene in matters which are totally technical and scientific and which are related to the safety of people?’’

The saddest thing is to know that the flood was not a natural disaster but a man-made one, says Vishal Gosavi from Walva village in Shirgaon Taluka of Sangli who lost his house and crops in the floods.

Water resources secretary Rajendra Pawar said, “The discharge from the dams was done according to 40-45 years statistics but no one expected a rainfall 400 percent above the normal.” Meanwhile, a committee has been constituted to re-examine the flood-line norms.

This post was originally published on Mongabay. Read the original here.